All photos by Molly Adams

I didn’t know what to expect as I was heading to the Sharpe Suiting “Vintage Glam” themed Kickstarter launch event at The Must bar in L.A. I knew a bit about Sharpe, a queer-centric brand forging the way in producing masculine dresswear undefined by gender binaries. But, the fact was this: The Sharpe Kickstarter launch immersed me in an empowering experience that I have never before been in, namely a bar full of individuals who were female assigned at birth (FAAB), who are fashion conscious, who had put time and effort into their outfits, but whose outfits were comprised of menswear…individuals just like myself. As I parked my car round the corner from the stylish Must bar in downtown LA where the event was held, I caught sight of another dapper individual, arm in arm with a guest in glamorous feminine attire, crossing the parking lot. New to L.A., it was immediately clear this was going to be unlike anything I’d experienced before. 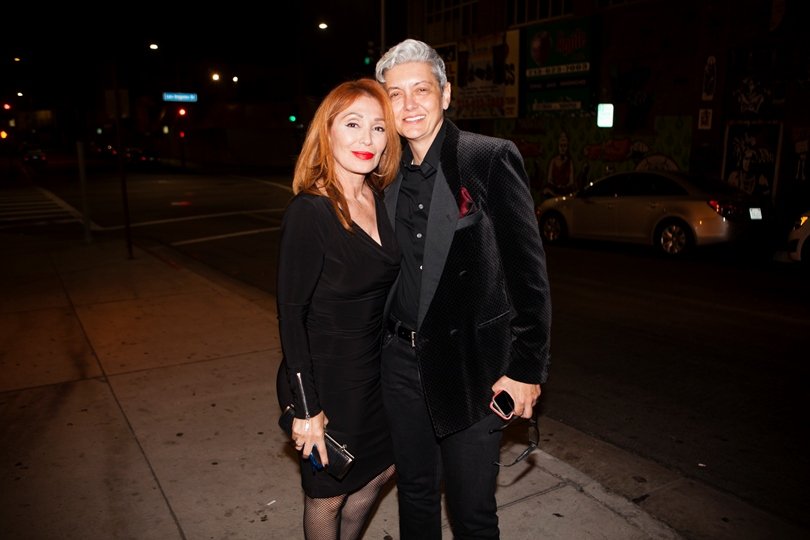 I met up with dapperQ photographer Molly outside, and we quickly introduced ourselves to the brains behind Sharpe: Leon Wu and Vanessa Craig. Leon was downstairs, dressed very smartly in a dapper suit and top hat and surrounded by models having make-up done by a make-up artist who, Leon told me, is also a drag king in her own right. The models were all preparing their outfits, and it was a delightful novelty to hear the hurried preparatory discussions be about which cufflinks to wear with which brogues! The models were being made up with shadowed eyes and penciled on mustaches, a fabulous mix of over-the-top glamour and classic masculinity that embodied the evening’s vintage glam vibe. 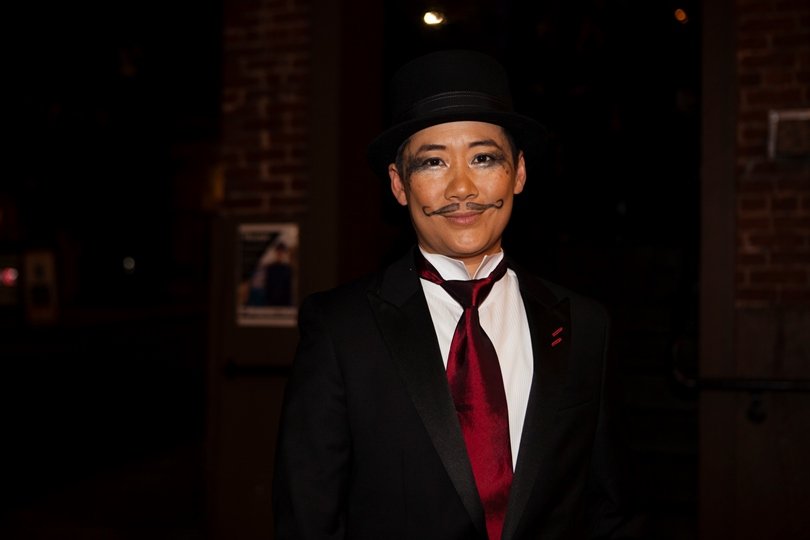 Upstairs was Vanessa, the other half of the Sharpe team. The Must bar is a regular haunt for her, as she holds a monthly event at the Must bar called Pant Suit: an eighties-themed networking event for women. Despite her expertise at event planning, Vanessa said the Kickstarter had been hard work and definitely a labor of love that she was glad was finally happening, and even compared the realization of the event to her having finally given birth to her baby! The Kickstarter wasn’t the only place where Vanessa had worked hard; She had come dressed to the nines with an inventive approach to menswear. When I asked her what inspired her look, she responded, “I guess an old man coming home after a hard day’s work!” Her rolled-up sleeves and waistcoat, paired with shorts exposing socks with garters, definitely conveyed this image. 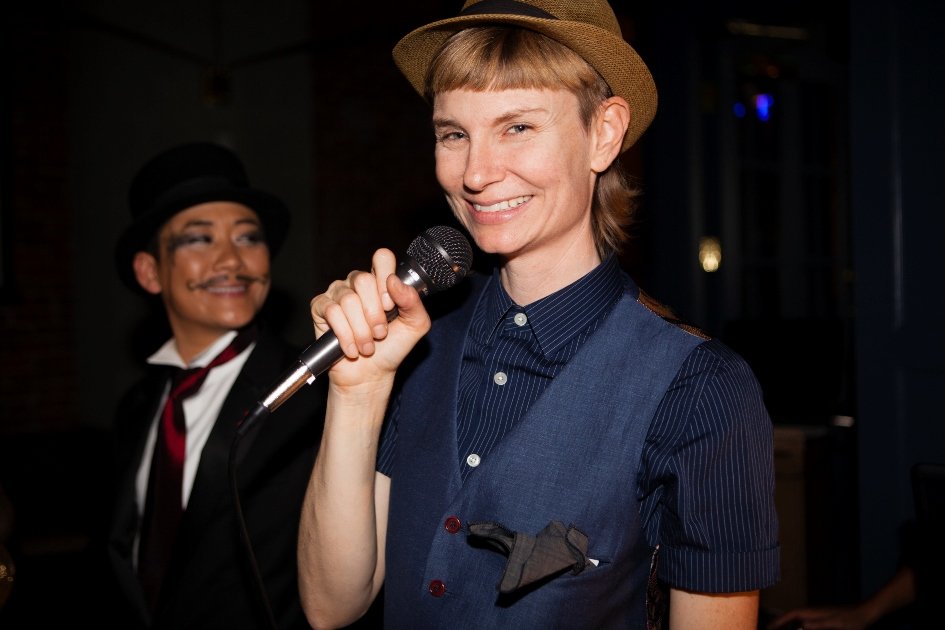 Leon explained how the Sharpe Suiting team came up with the theme of the evening saying, “Tonight you are dressed in your vintage glam attire to celebrate the hard successes of the past.” The Must bar provided a beautiful background to everyone’s dashing outfits. Sharpe had its own personal touches to the space, including an awesome custom cocktail list with drinks named after old time vintage outfits with camp twists. Attendees clearly shared Sharpe’s devotion to menswear, and this was celebrated upon entry with a red carpet station where photographer Mei shot pictures of those keen to flaunt their fashion sense. The main room featured a podium where the diverse group of models wore Sharpe creations. 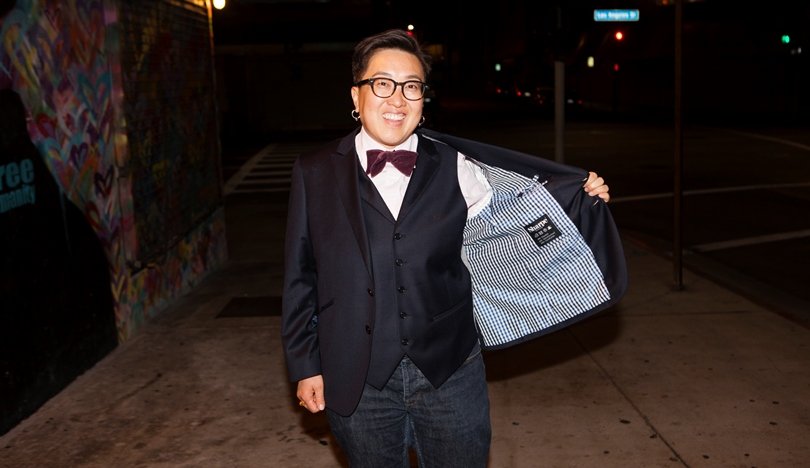 Before showing Sharpe’s Kickstarter video, which featured Kelsey Chavarria of The Real L Word, Leon addressed the room to explain Sharpe’s mission with a speech, a message I’m sure I wasn’t the only one to find moving. He began perfectly by addressing the crowd, “Ladies, gentlemen and everyone inclusive and exclusive far beyond these antiquated titles.” He went on, “When I founded this company, I wanted everyone in this room to feel comfortable with identity,” before quoting Kate Bornstein to say, “I see fashion as a proclamation or manifestation of identity, so, as long as identities are important, fashion will continue to be important.” He concluded by stating, “Welcome to your runway!” — a more precise description of the event would be hard to find. The inclusive environment Leon hoped to produce was definitely achieved.

I met an individual named Lindsey, who told me she had recently cut her long hair, the last thing she felt was connecting her to her femininity. Her sense of being surrounded by kindred spirits at Sharpe was unmistakable throughout our conversation.

It was fascinating to talk to guests at the event who had clearly worked long and hard on their outfits, and who were mostly pleasantly surprised to be stopped by me and Molly to be photographed, interviewed and praised for their inventions. Many sported thrift shop finds, which would work well with Sharpe Suiting’s vintage aesthetic. Bex’s outfit started with amazing silver Sam Edleman brogues, which were definitely thrift store gold! These were paired with stylish Michael Kors wide-leg pinstriped pants (again a thrift store find!), dapper tortoiseshell glasses and retro slicked down hair. Bex cut quite the fine figure striding across the Must bar clutching a beer. 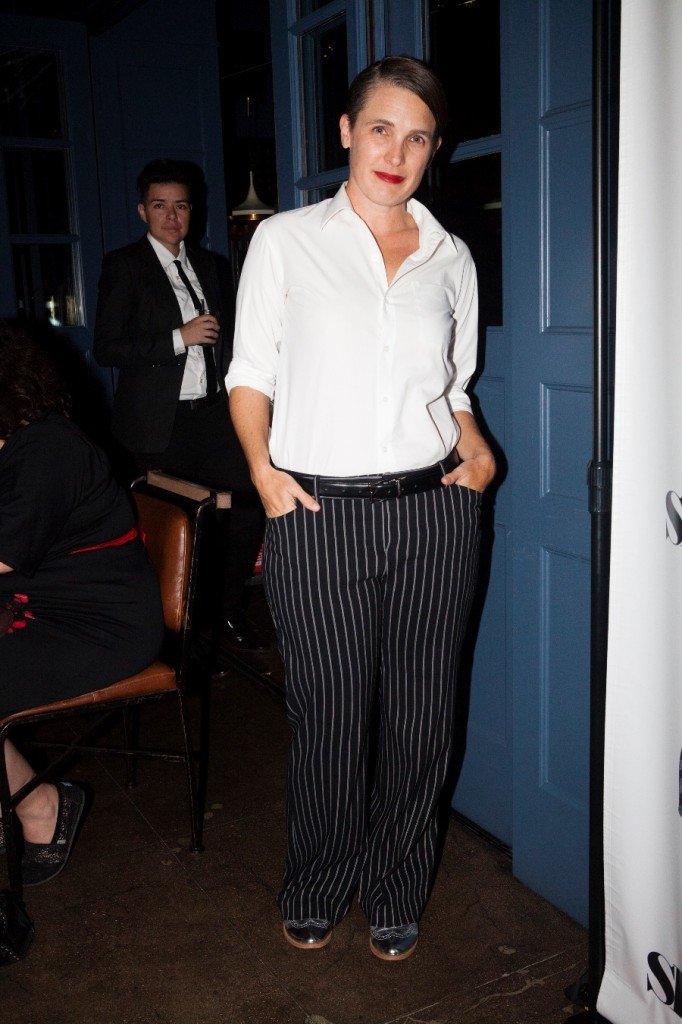 Vivian, better known as the Dapper Dyke, spoke to me about her love of thrift stores from which she manages to coordinate all her outfits despite her smaller frame. Although she told me anything can fit anyone with a little bit of tailoring, she then added that she sometimes finds items that simply fit despite her petite frame as-is. She stated, “I guess men were shorter back in the day!” Vivien wore a very stylish ensemble with an aviation inspiration, pairing her grey suit with a silk patterned tie and a gold pin on her lapel in the shape of a plane. She was awarded ‘Best Vintage Outfit’ of the night, a decision I personally felt was very warranted! 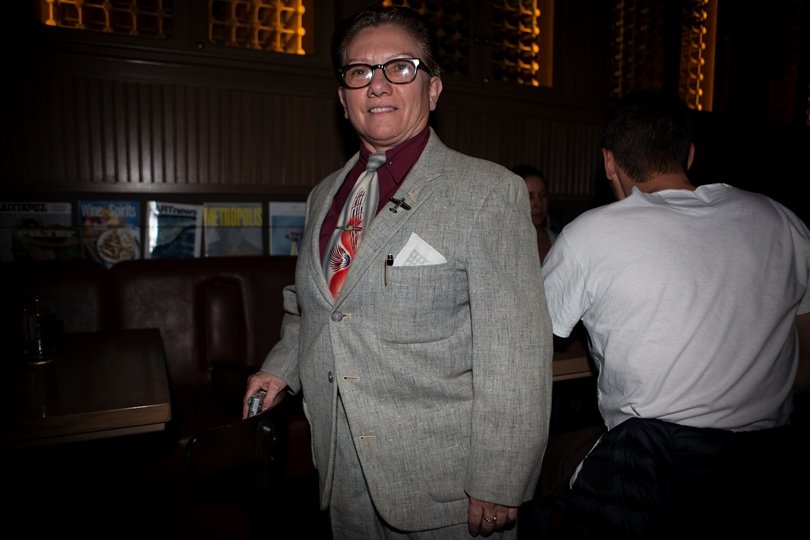 Sharpe is clearly a company that leaves customers satisfied with their custom suits. Proof of this could be found in that several of the night’s attendees were wearing their one-of-a-kind Sharpe creations. I spoke with one of the event’s models, Devon, who had come to the Kickstarter dressed in the gorgeous navy suit they had married their wife in three weeks earlier. (Congratulations, Devon!) Devon made their wedding suit perfect for the Kickstarter by pairing it with a red plaid shirt and red bow tie. They told me they cannot wait to wear the suit again to a wedding they are attending as a guest later this year, and that they are keen to have more Sharpe suits made, in black and brown. Devon couldn’t speak highly enough of the experience of having the suit made, describing the experience as a really fun one, surrounded by nice people. 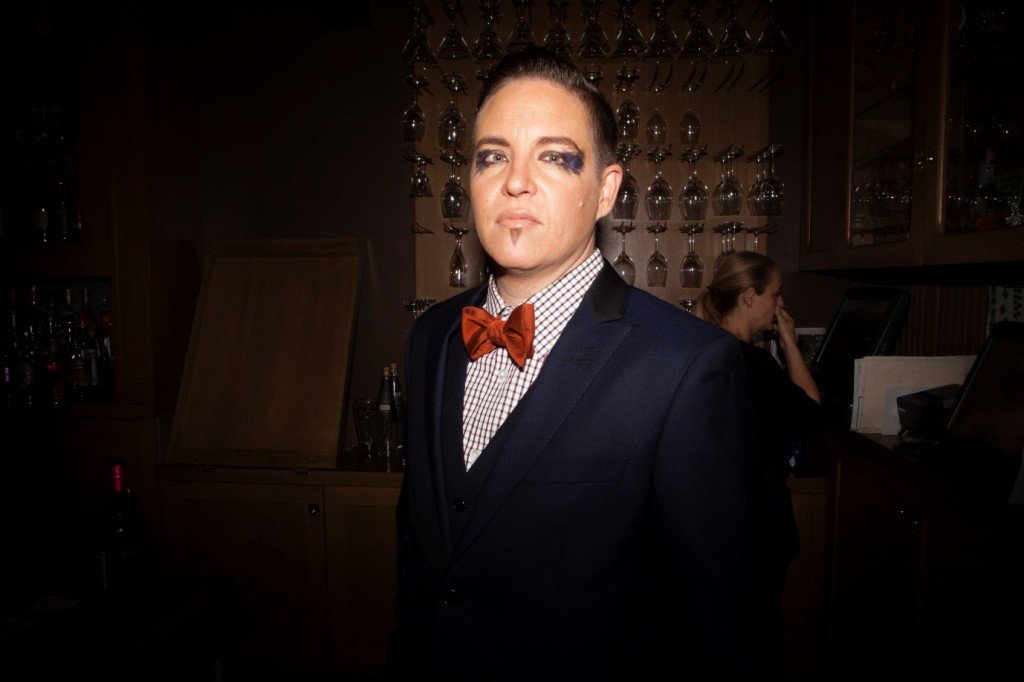 I even spotted the one and only Buck Angel smoking a cigar outside the bar, and when I went over for a chat with Mr. Angel, he showed me that he was wearing a sleek black Sharpe creation with his name embroidered on the inside pocket. Buck was incredibly enthusiastic when I asked him what his experience with Sharpe had been like, telling me how professional they were and how great their customer service was. Although this was not his first time having a custom suit made, it was his first time having one made by a queer company. The experience, he told me, could not be compared. 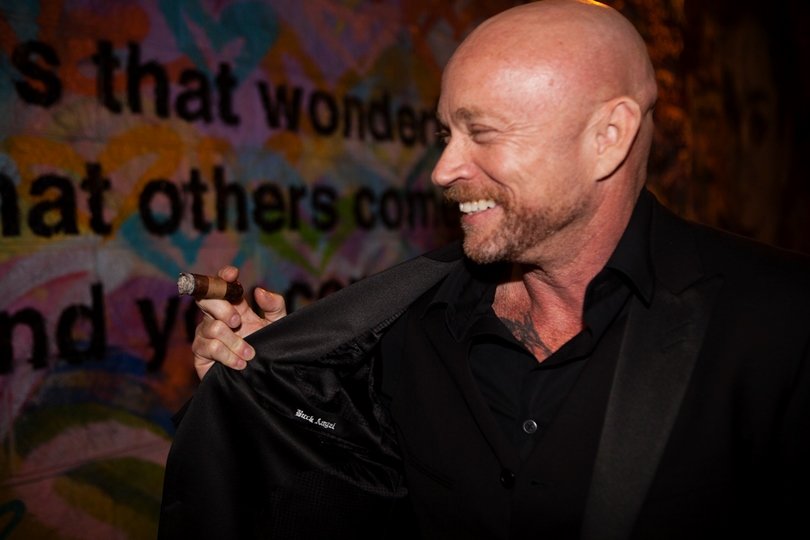 I left Sharpe’s Kickstarter with a feeling I have never before had, of having been face-to-face with a whole room full of people who share my passion for glamorous menswear. I am sure many left the night with a similar sense of belonging and empowerment, of having been celebrated rather than shunned for the way they dress, and ultimately this is what Sharpe is all about. It is clear that Sharpe is pioneering a project which is a serious requirement in our community; That they are doing both this and providing dapperQs with smiles, fun, and an opportunity to dress up and swig cocktails along the way makes them all the more admirable! 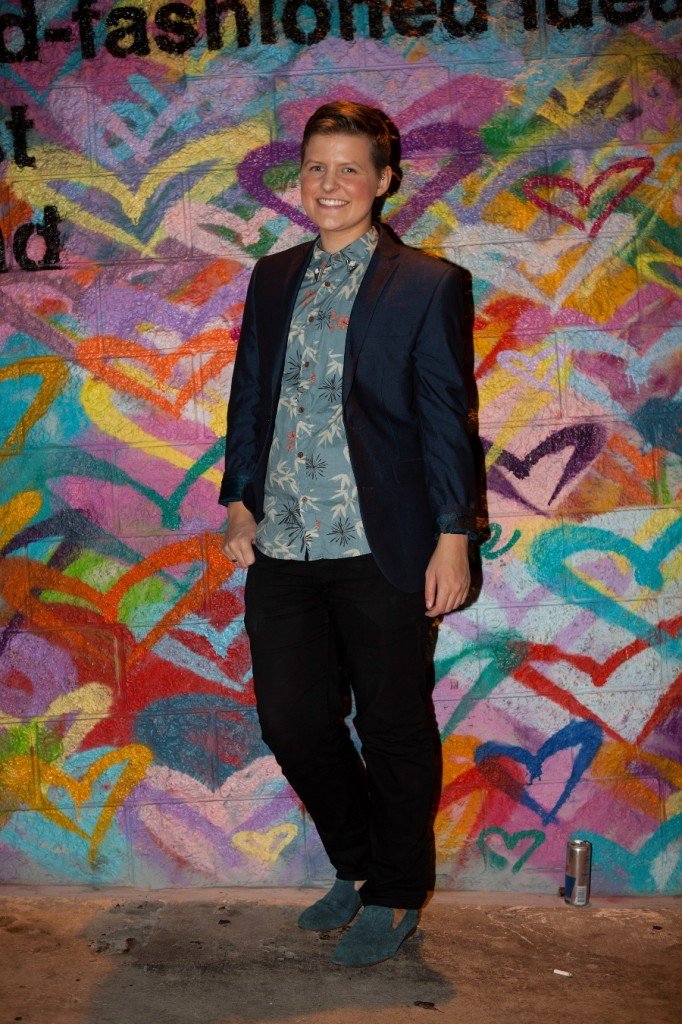 Sharpe is still running its Kickstarter campaign to raise the $60000 they need to start a ready-to-wear line. If you would like to contribute to the cause, you can do so here. In the meantime, check out some more images of the party, and don’t forget to feast your eyes on Molly’s full-set of pictures on dapperQ’s Facebook page! 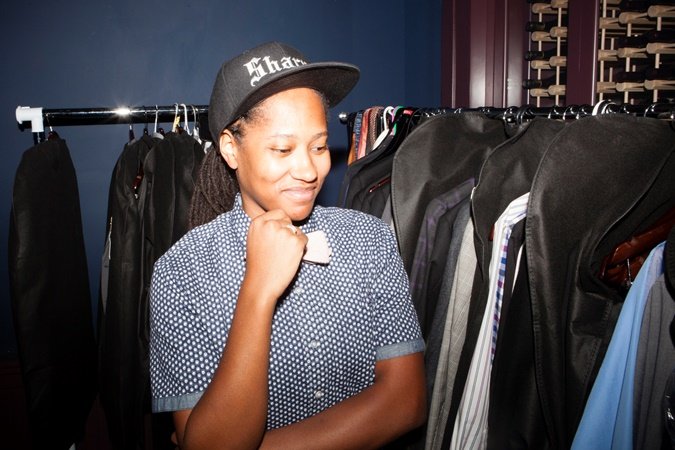 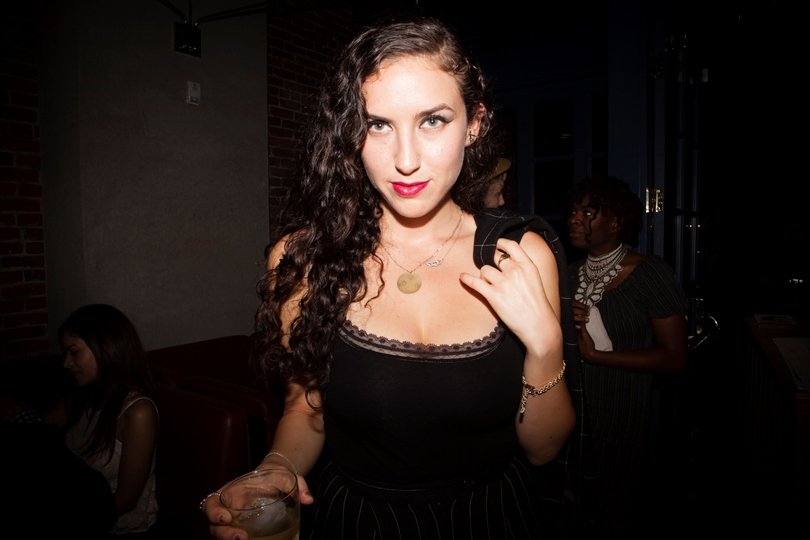 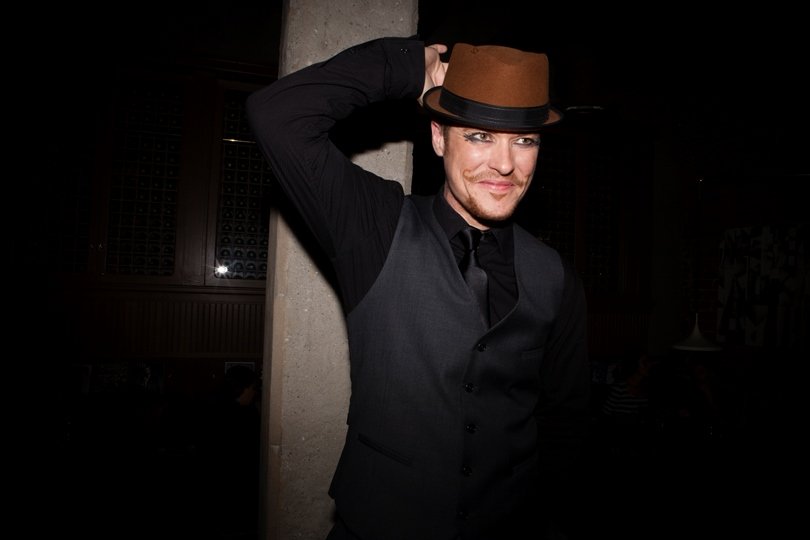 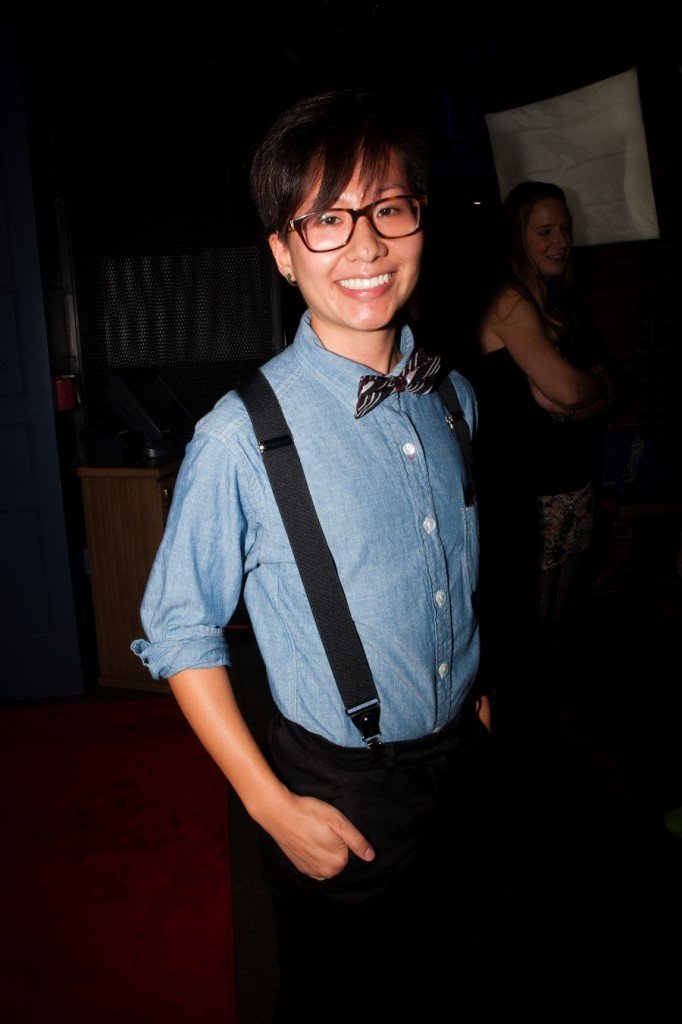 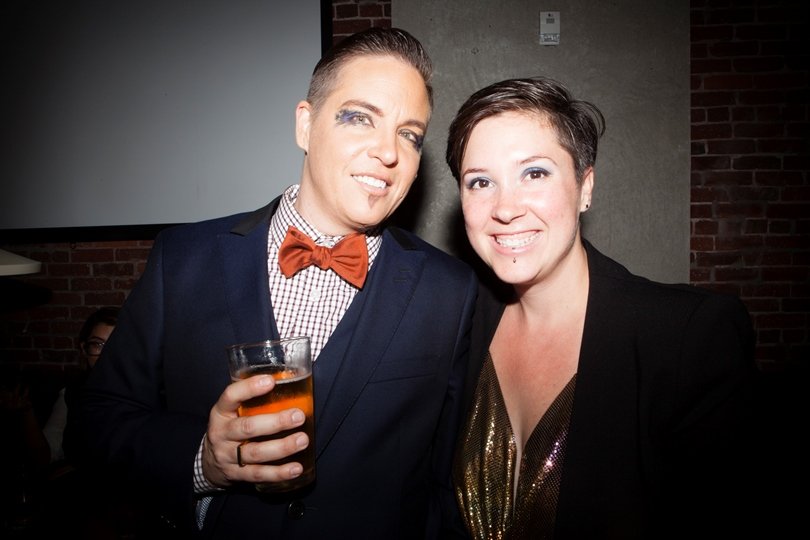 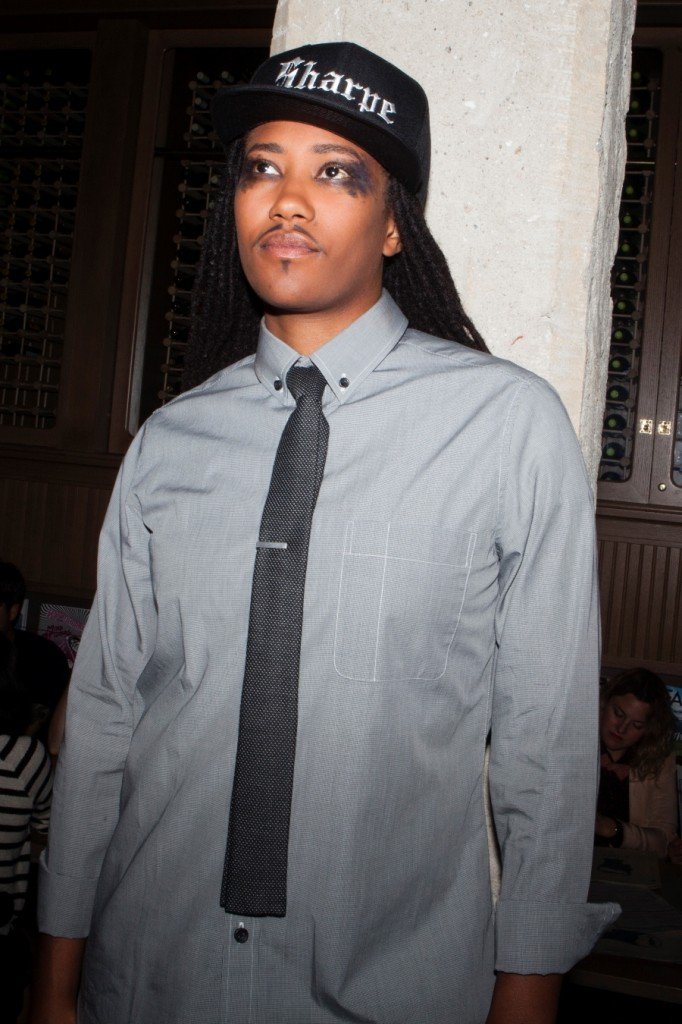 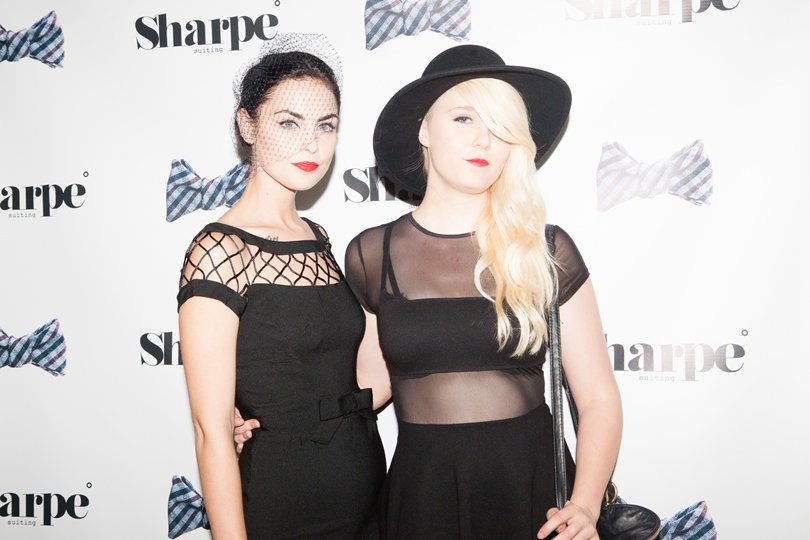 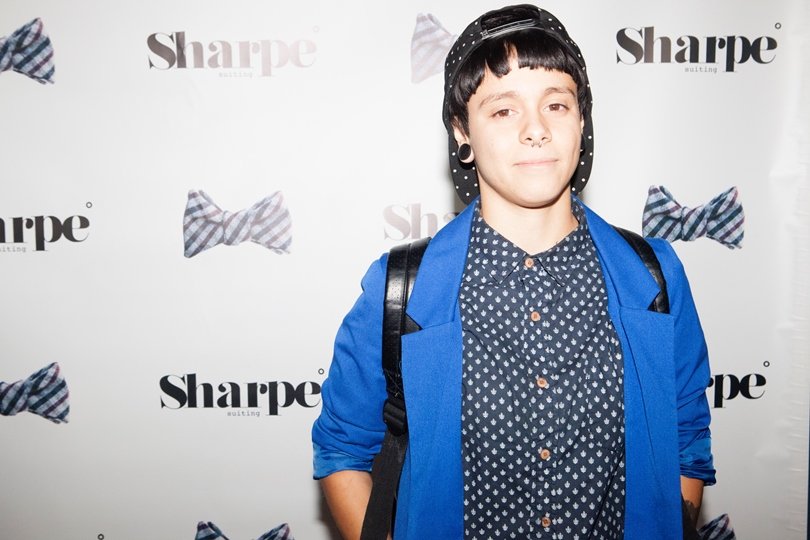 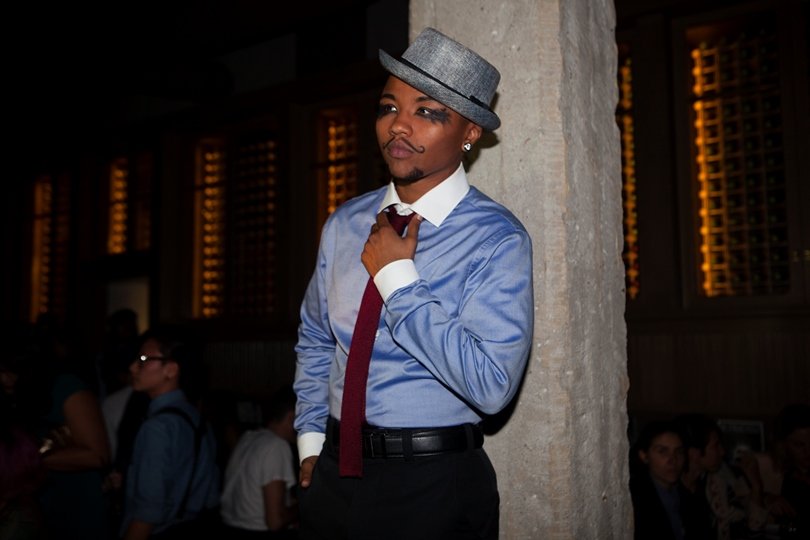 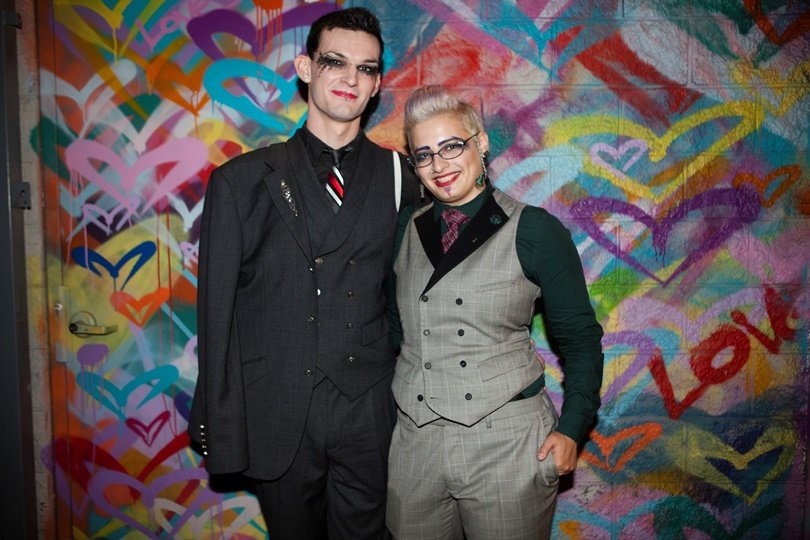 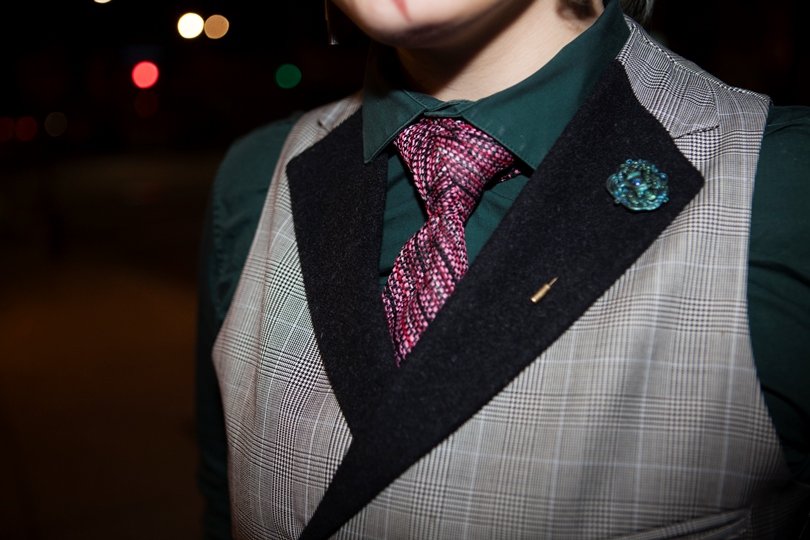 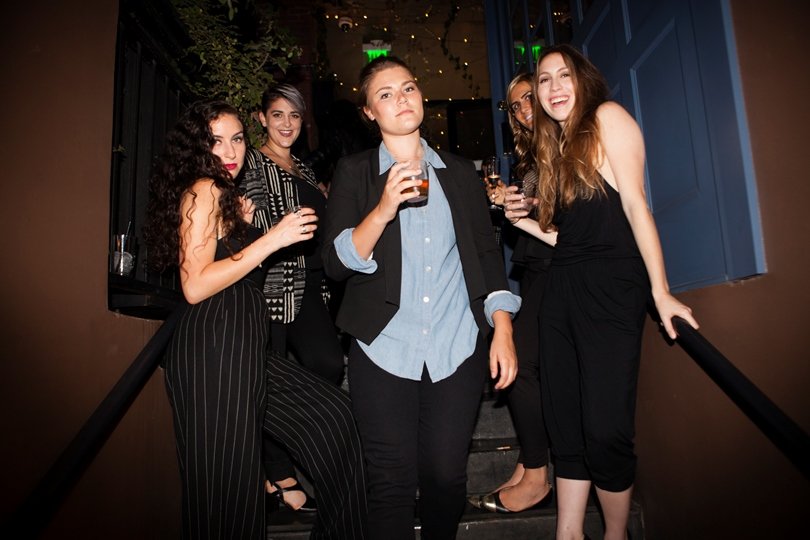 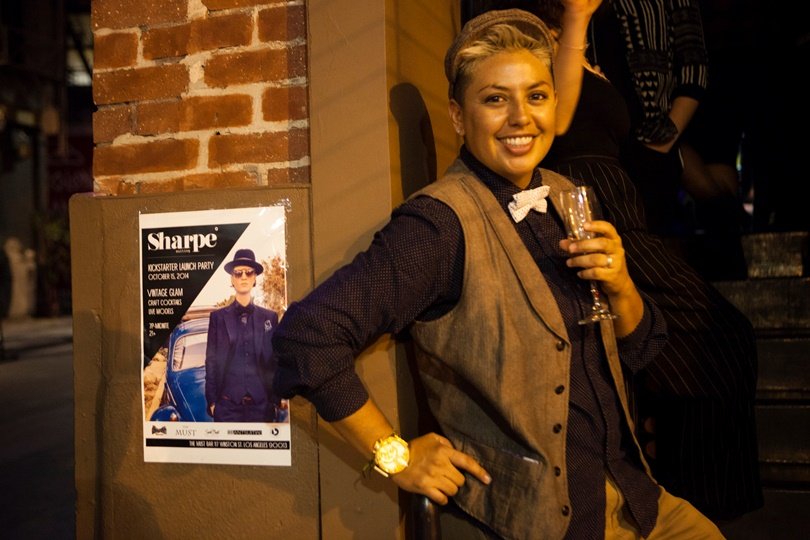 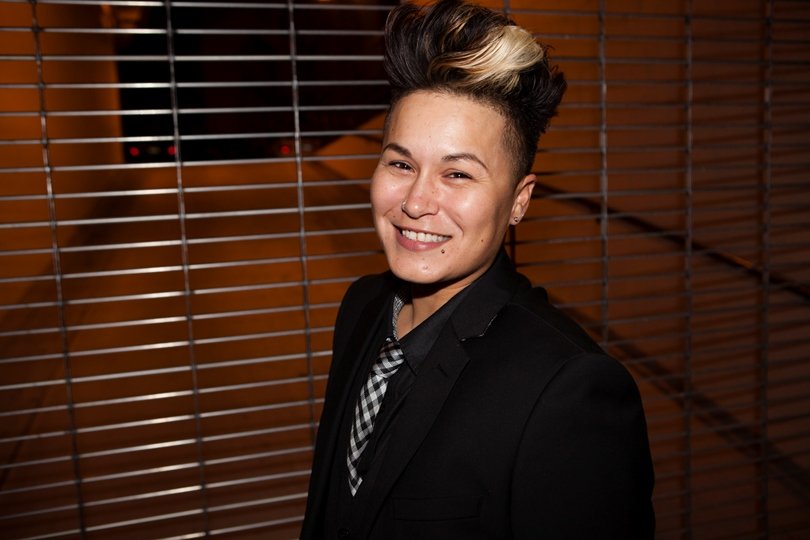 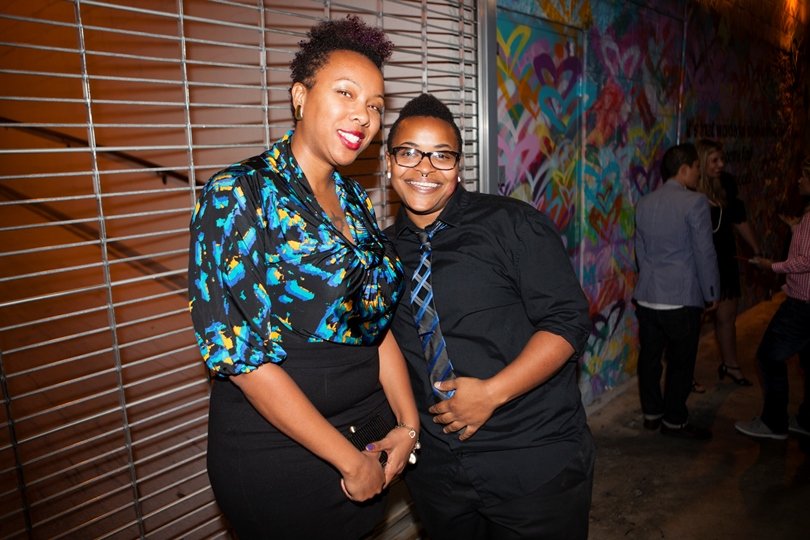 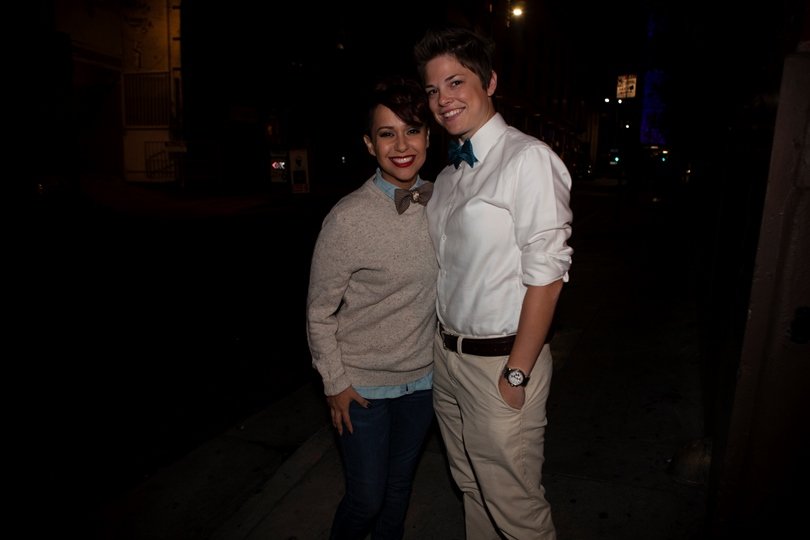 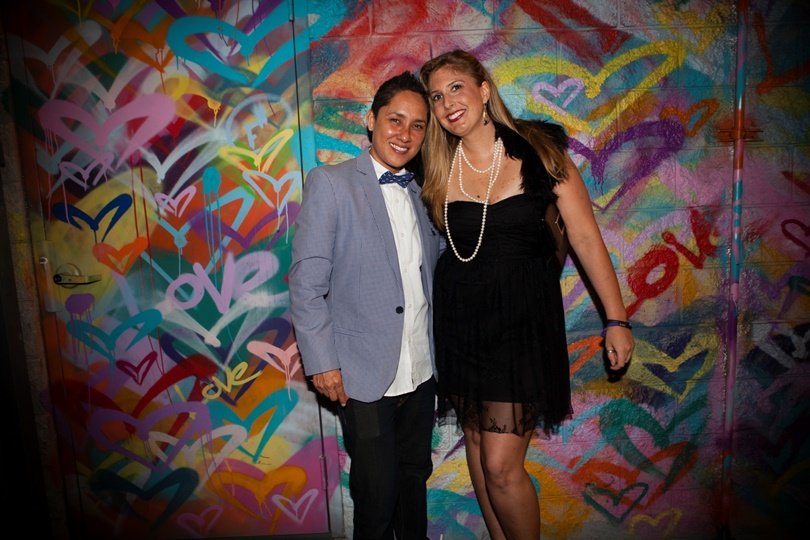 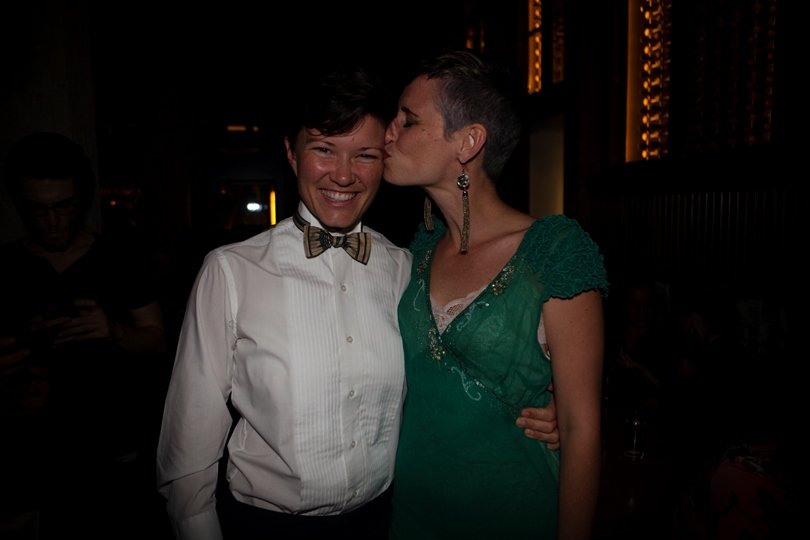 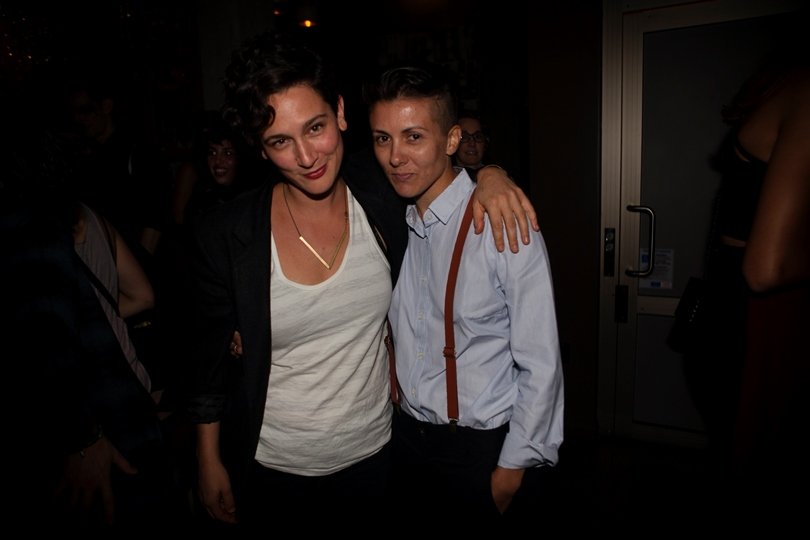 Molly Adams is from Los Angeles and she takes pictures. You can find her on instagram @mollyktadams if you want.

Written By
Alex Samuel
More from Alex Samuel
Whether you’re headed back to high school, gearing up for a year...
Read More