dapperQ is proud to present our fourth annual New York Fashion Week queer style show, the largest fashion event celebrating LGBTQ bodies and fashion during NYFW. This year’s show is titled R/Evolution in defiant resistance to the attacks being waged against our community and our stylish unified resistance against those attacks. 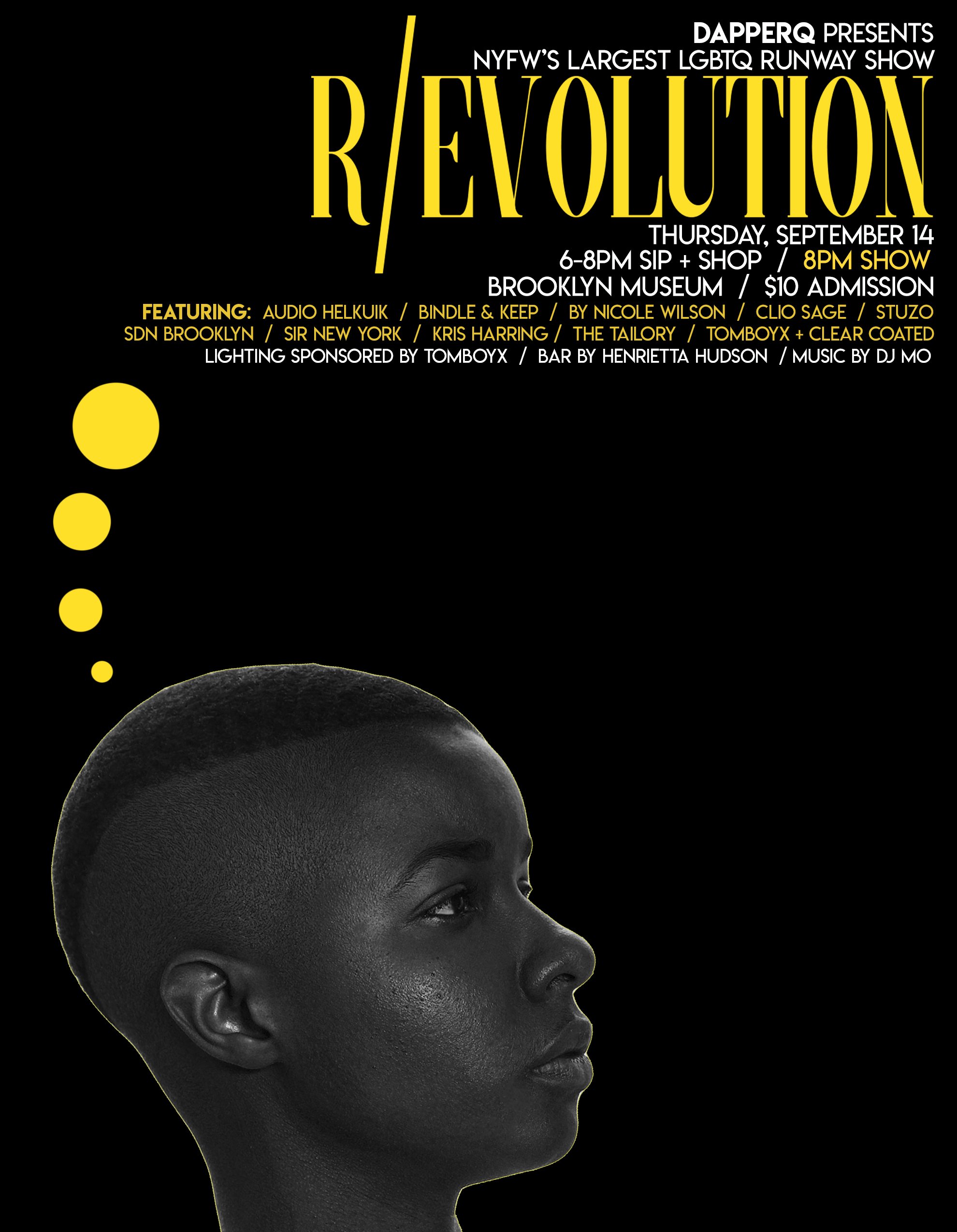 ALSO: Remember, designers, models, volunteers, and anyone who pays for museum entrance to the show will receive free admission to Hot Rabbit // Bad Habit — DapperQ ••R/Evolution•• AFTER PARTY !!, our official after party. Just show your the receipt your museum provides you at the door and slide ride in for round two of NYFW queer partying.

☆ MC Gabby RiveraWe are so thrilled and honored to announce that the show’s official MC: Gabby Rivera!
Gabby Rivera is a queer Latinx writer living in Brooklyn, NY. She is currently writing the sold out smash solo America Chavez series for Marvel. Her critically acclaimed debut novel Juliet Takes a Breath was called the “dopest LGBTQA YA book ever” by Latina. Put simply by Roxane Gay, it’s “F***ing outstanding.” Gabby’s been featured nationally on SyWire, PBS News Hour and publications such as The New York Times, Vibe Magazine, Refinery29, and The Advocate. She’s represented by New Leaf Literary & Media, Inc.

☆ Safewordsociety – A QTPOC Visibility Podcast crew will be our official Step and Repeat hosts. They are going to be asking you some fashion questions and making sure your best threads get Snapped! #SafeWordSociety is a Brooklyn-based podcast about the nuances of living, loving & thriving as #QTPOC. Creator & host, Kristen McCallum and co-host Lamika Young, use interviews & discussions with thought leaders, influencers and everyday people to navigate the authenticity of identity. Their mission is to create a safe space for versatility and self-definition while uplifting the stories of those that aren’t often heard.

► Audio Helkuik (NYC)
Audio Helkuik is a queer/trans designer with an obsession with leather and an intentional disregard for traditional gender norms. Knowing each body is uniquely beautiful, every garment and leather harness is handmade according to the customer’s measurements. This brand’s mission is to make their customers feel powerful and brave through the act of getting dressed and accessorized.

► Bindle & Keep (NYC and DC)
Recently featured in The New York Times, Bindle & Keep is a bespoke tailoring company for all genders and is currently the subject of a documentary that is being produced by Lena Dunham, the writer, creator, and star of the hit HBO series Girls. The documentary, titled “Three Suits,” will “follow several of Bindle & Keep’s transgender clients as they go through the process of having custom suits made, examining the significance of the process for a set of customers with complex gender identities.” – Vanity Fair

► Nicole Wilson (Los Angeles)
The mission is to create a product that gives in many ways. Through the connection of Ugandan Organizations such as HRI, Nicole Wilson will spread the message of equality and liberty, through ready to wear pieces. www.bynicolewilson.com

► Clio Sage (Brooklyn)
Graduate of Barnard College, Columbia University, Clio majored in architecture but applies her technical spatial training to artistic mediums. Her interests include human presence and interaction through the digital realm, reconciliation with emotional trauma, sensory environments, and empathetic user experiences. Her latest and now primary focus has been using her architectural background as a point of influence for fashion design, building clothing out of unconventional apparel materials through a fusion of laser-cutting and rigorous hand work. Full-time, she works as a professional architectural model-maker at Radii Inc, though she dedicates the majority of her spare time to expanding her collection. She is currently located in Brooklyn, New York and open to inquiry, sample loaning, and artistic collaboration.

► Kris Harring Apparel Group (Brooklyn)
Based in Brooklyn, New York, Kris Harring is a gender neutral eveningwear brand taking a softened approach to traditional tailoring. Based around the deconstruction and re-imagination of the classic tuxedo, the brand looks to explore the ideals of a world in “uniform”; where open-ness, vulnerability and freedom of self through wardrobe transcends.

Women owned and operated, TomboyX is a genderneutral underwear brand offering designs in a diverse range of sizes.

Clear Coated is a rainwear brand built to create rainproof clothing and accessories that enhance and compliment, rather than hide, an outfit or personal style. All products are designed and developed by Miriam in her Seattle workspace. All pieces are handcrafted by Miriam, and occasionally with the help of a selected maker, all within the Seattle area.

Stay dry and stay tuned, as the future will be unexpected… and wet! 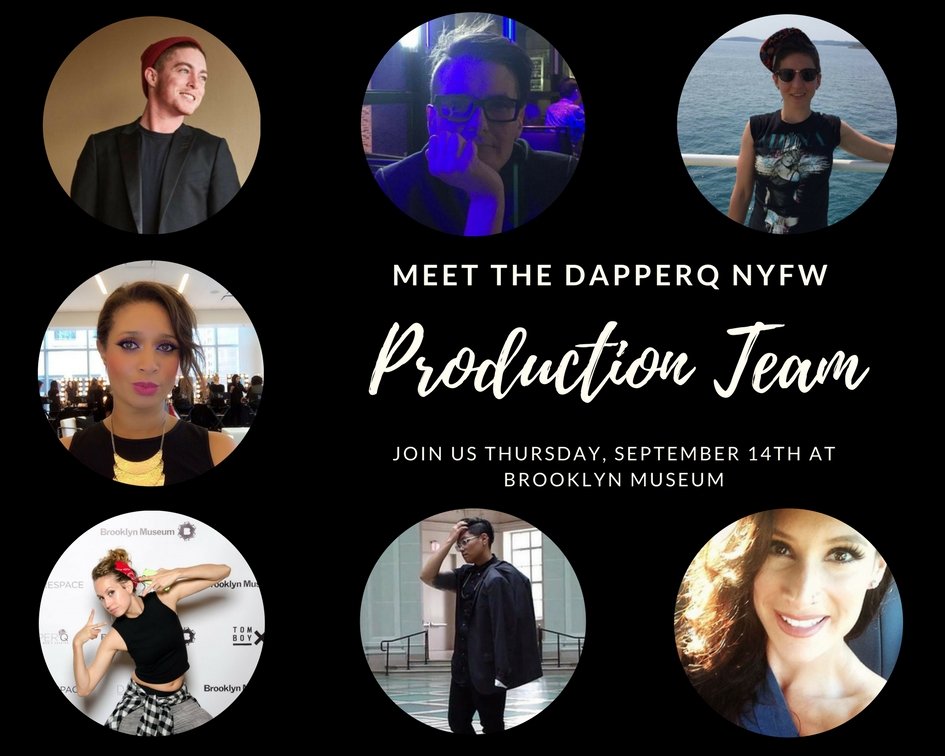