Model and body positivist activist KhrystyAna produced the third consecutive “flash-mob” style “The Real Catwalk” runway show in Times Square last Saturday, December 1st. The vision of the show, which was first held in December 2017 and again in London in August 2018, is to help raise a growing demand for greater diversity and representation in fashion. 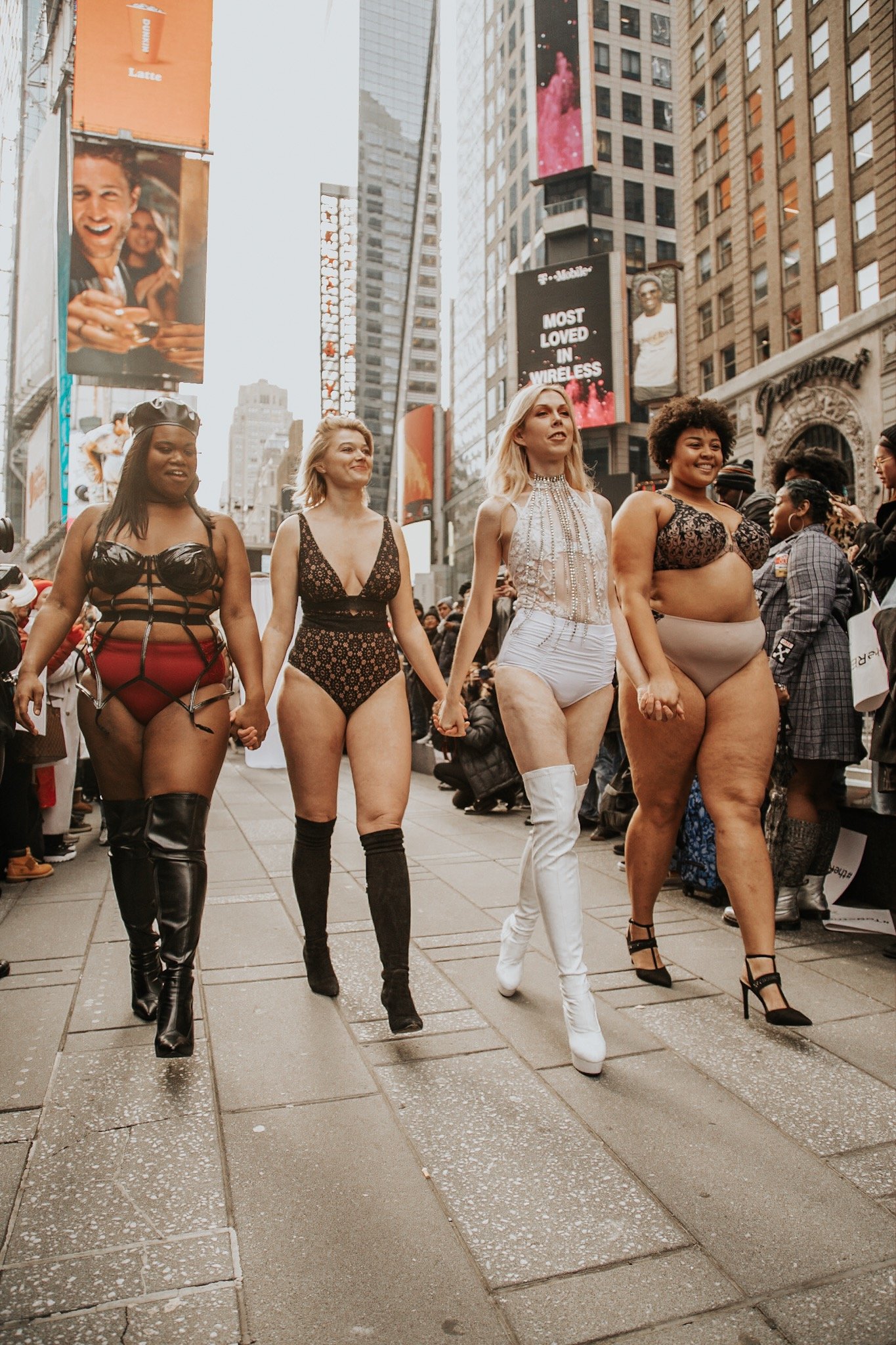 The event was intentionally scheduled the night before the Victoria’s Secret show aired. (The VS show has sunk to its lowest ratings ever.) Khrystyana stated that over 200 participants from the U.S., Italy, Canada, England, and more walked the runway in a show of siblinghood solidarity. “I hope we inspire many people to feel more confident in their bodies, because everyone is allowed to celebrate themselves even if the media has told us not to unless we look or act a certain way,” Khrystyana told dapperQ. We caught up with 10 models from the show to get their perspectives on what #theREALcatwalk meant to them, because the models’ voices about their experiences in leveraging the runway as a form of liberation and empowerment is just as, if not more, important as the experiences of those watching the show. 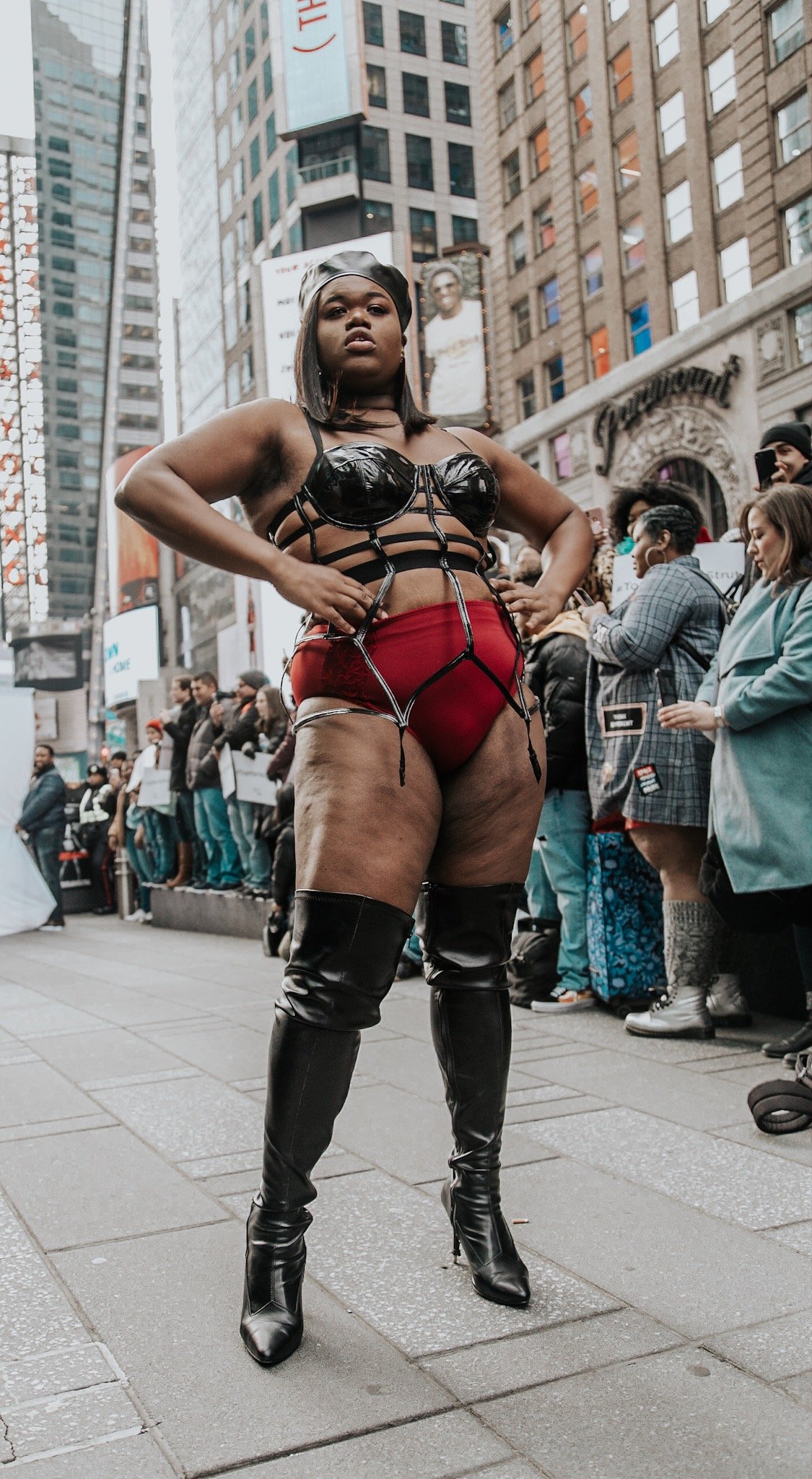 “The Real CatWalk centered the most marginalized body on this planet by allowing a black trans plus size woman (me) to open their runway show in the middle of time square. It is important that we recognize and celebrate this act of love , this act of reclaiming power , this act of resistance in this very moment, in this political climate, in the wake of the broadcasting of the most narrow and toxic display of “ Fantasy “ called the Victoria’s Secret Fashion Show! The Real Catwalk represented everyone who has spent the entirety of their lives pushing against the standard that’s caused women for years to hate and harm their body, and that runway , in a major way , combated against those harms . It’s time we that we clip our wings!” 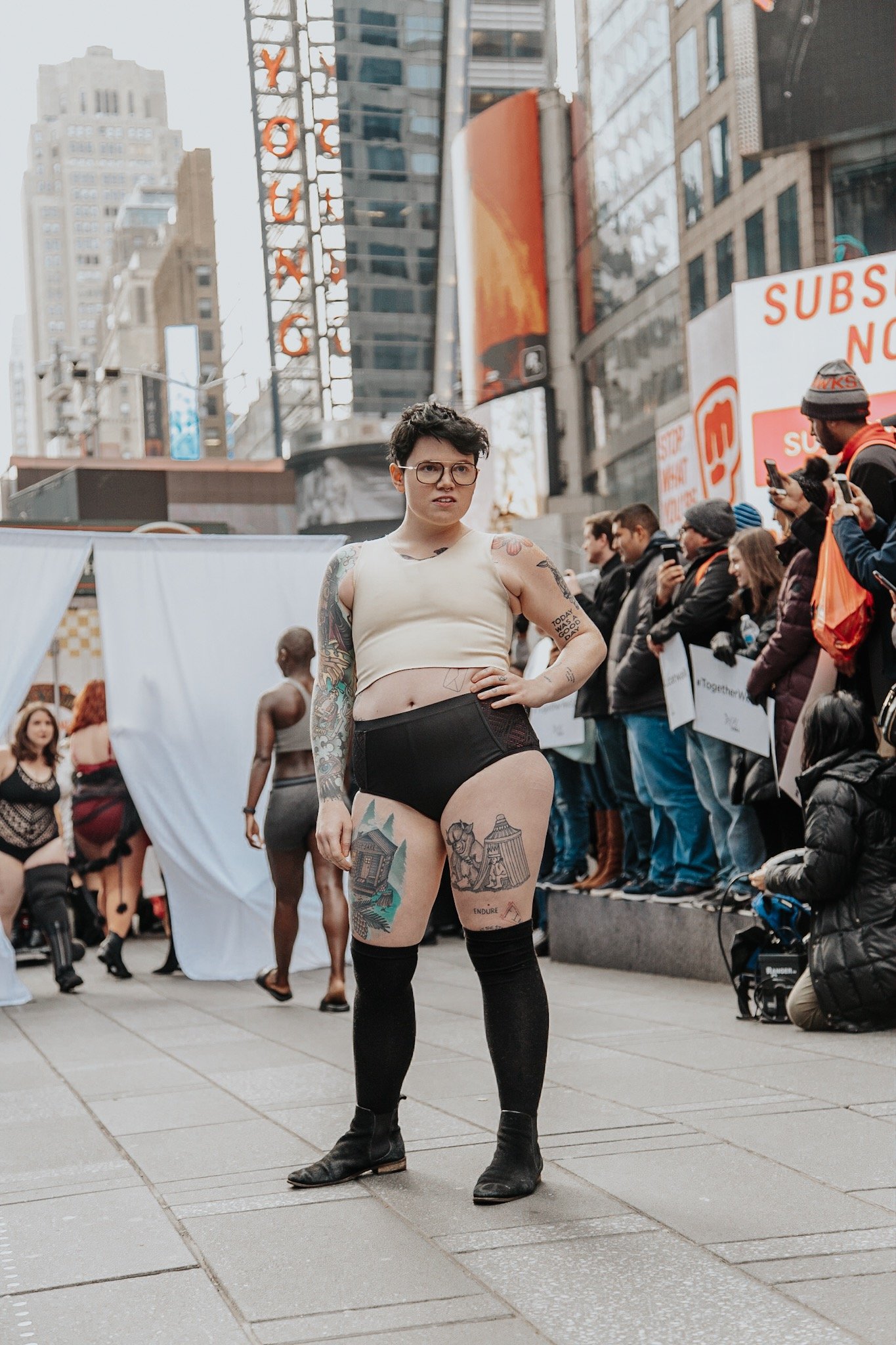 “For me, being a part of The Real Catwalk meant celebrating inclusivity and visibility. I wore a binder for the walk because representation and visibility mean something; to be able to see someone you can relate to and connect with is so empowering. My binder makes me feel one with my body and makes me feel comfortable in my own skin and if someone can see me and think ‘Okay, I can do that!’ or ‘That person looks like me!’ – that’s all I can ask for. The walk included such a diverse group of bodies, ethnicities and gender identities and I was and am so honored to be a part of something that celebrates that diversity and is working to change beauty standards.” 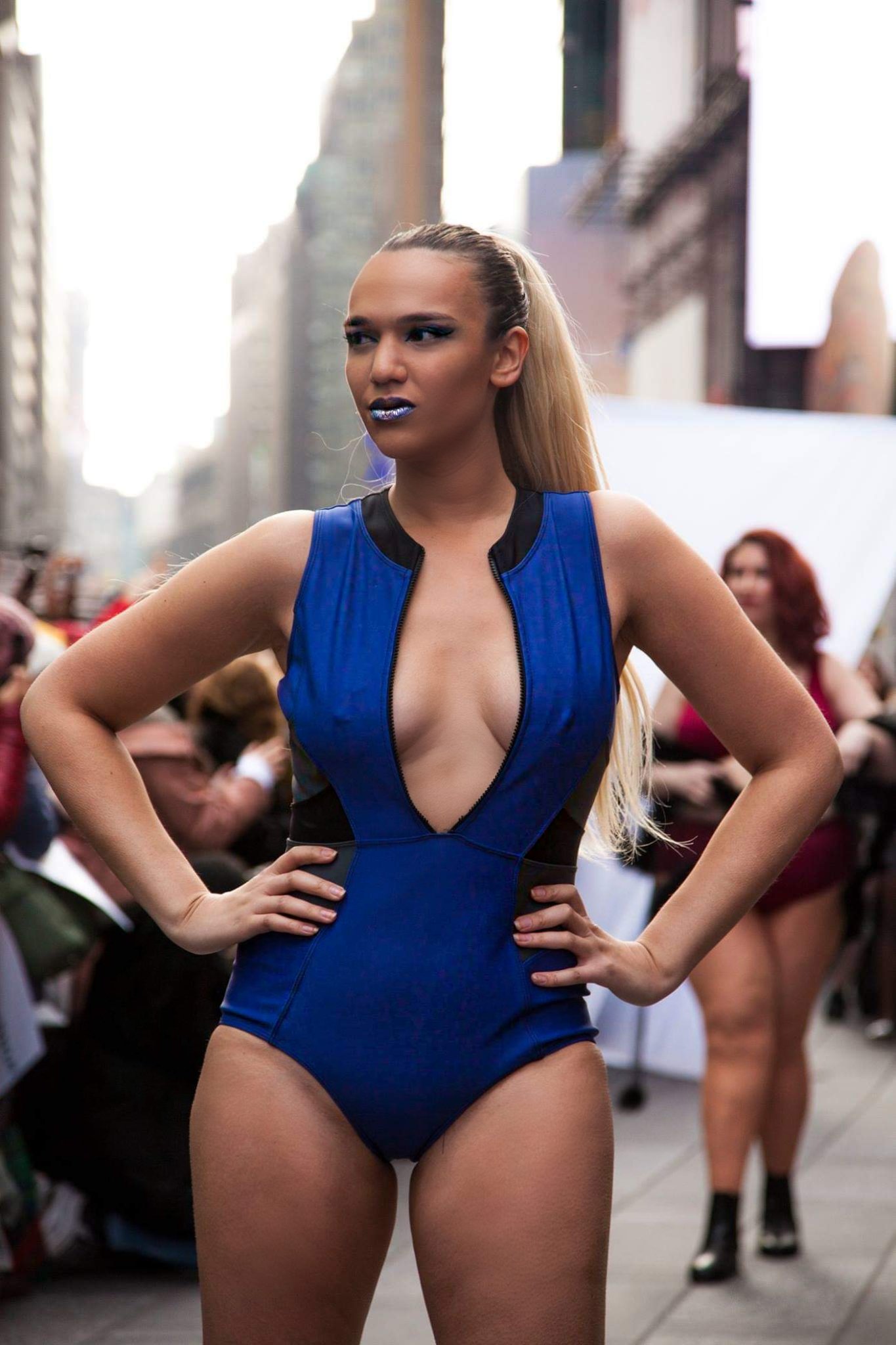 “As a proud trans woman of color who lives with mental health issues (depression, anxiety, PTSD and body dysmorphia), I felt it was my duty to join The Real Catwalk this year. I see my queer family, my trans brothers and sisters, my gender non-binary friends suffering everyday due to living in a society that degrades, derides and brutalizes us simply for living in our truth unapologetically. Personally, I’ve attempted suicide numerous times in my life as being a trans person comes with a great deal of emotional, mental and physical violence from those that do not understand us. My mission in walking TRC was to prove to myself, and others, that we are WORTHY of being seen, heard, acknowledged and loved for the beautifully different human beings that we are!” 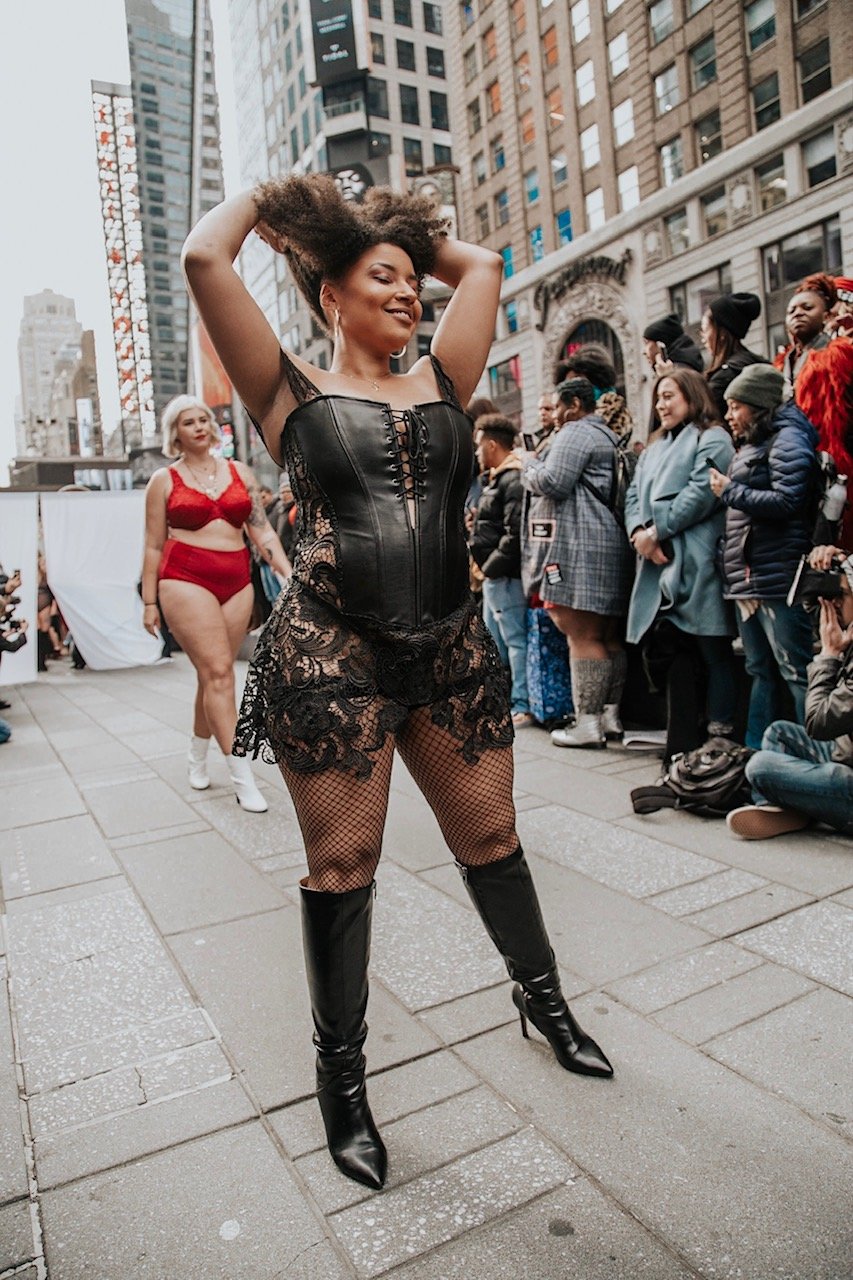 “Participating in this show meant that I can be seen in my true authentic form without the fear of backlash. I mean sure, you’ll get negative commentary with anything you might do, but the Real Catwalk was a safe space because it included people from different backgrounds and was founded on love, easily becoming siblinghood. In order to make any real change in the world, you must connect with people on a genuine level and give them the energy you want to see reciprocated throughout the world. We say the world needs love, but are you doing your part? That starts with loving yourself and TRC was a reminder of that. I struggled regularly in life with depression and anxiety, my body not being small enough or tall and big enough to fit into a standard, and trying to figure out if I was straight, gay, or bi growing up. I know I am worthy enough to represent the petite curvy community and am glad to be able to have done that this weekend! Also, sexuality was just as inclusive here as gender, race, size, and more. To be pansexual means to love without labels. It isn’t about whether you’re a man or a woman, it’s about who you are, accepting you, and loving you as you are. That is something everyone should remind themselves of.” 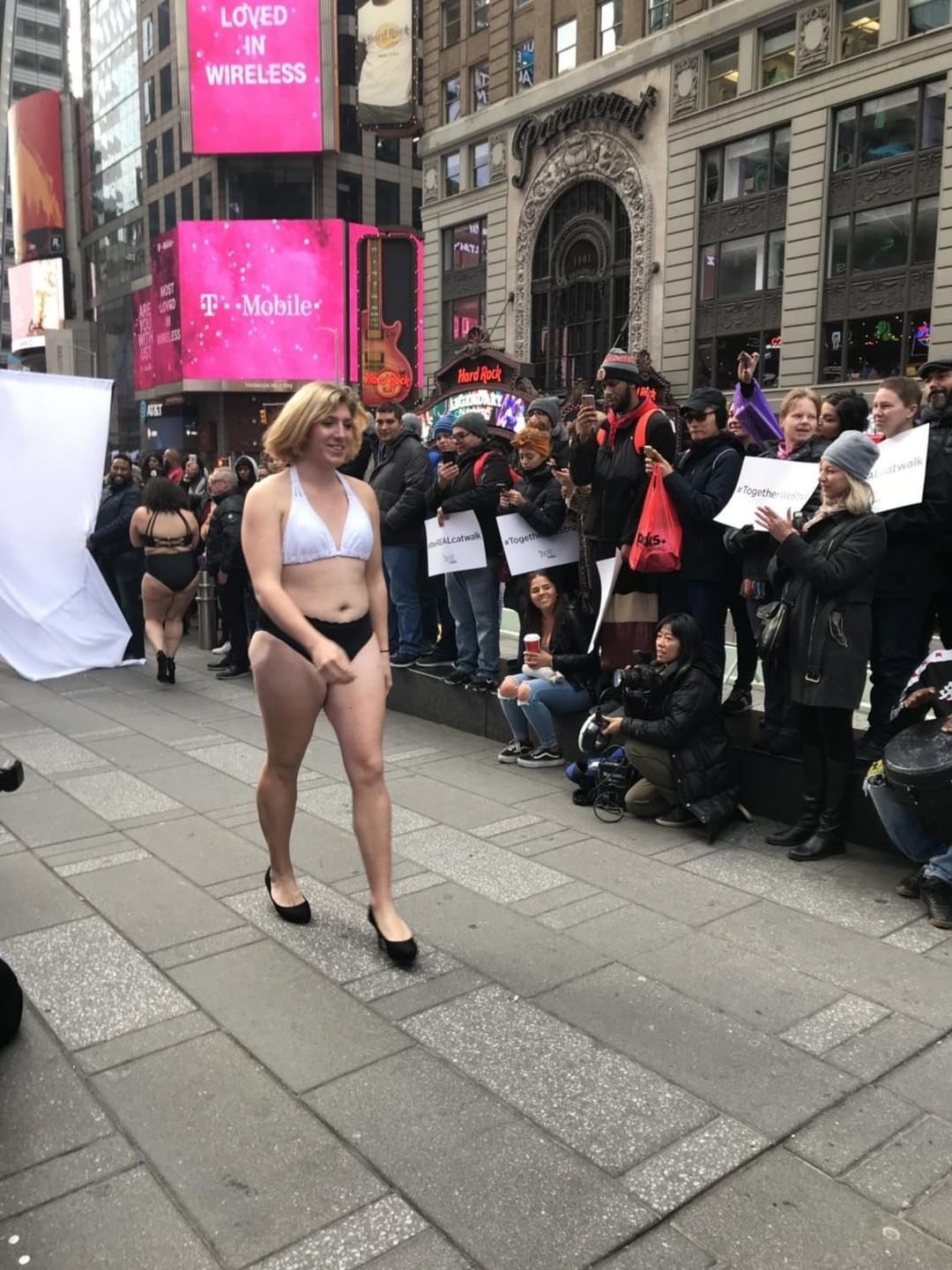 “What matter is we all came together and included people that represent every face of oppression. To be an ally in this world, you need to be an intersectional one. Today, I’m so proud of what we did and came together as one of the most beautiful sibling hoods in the world.” 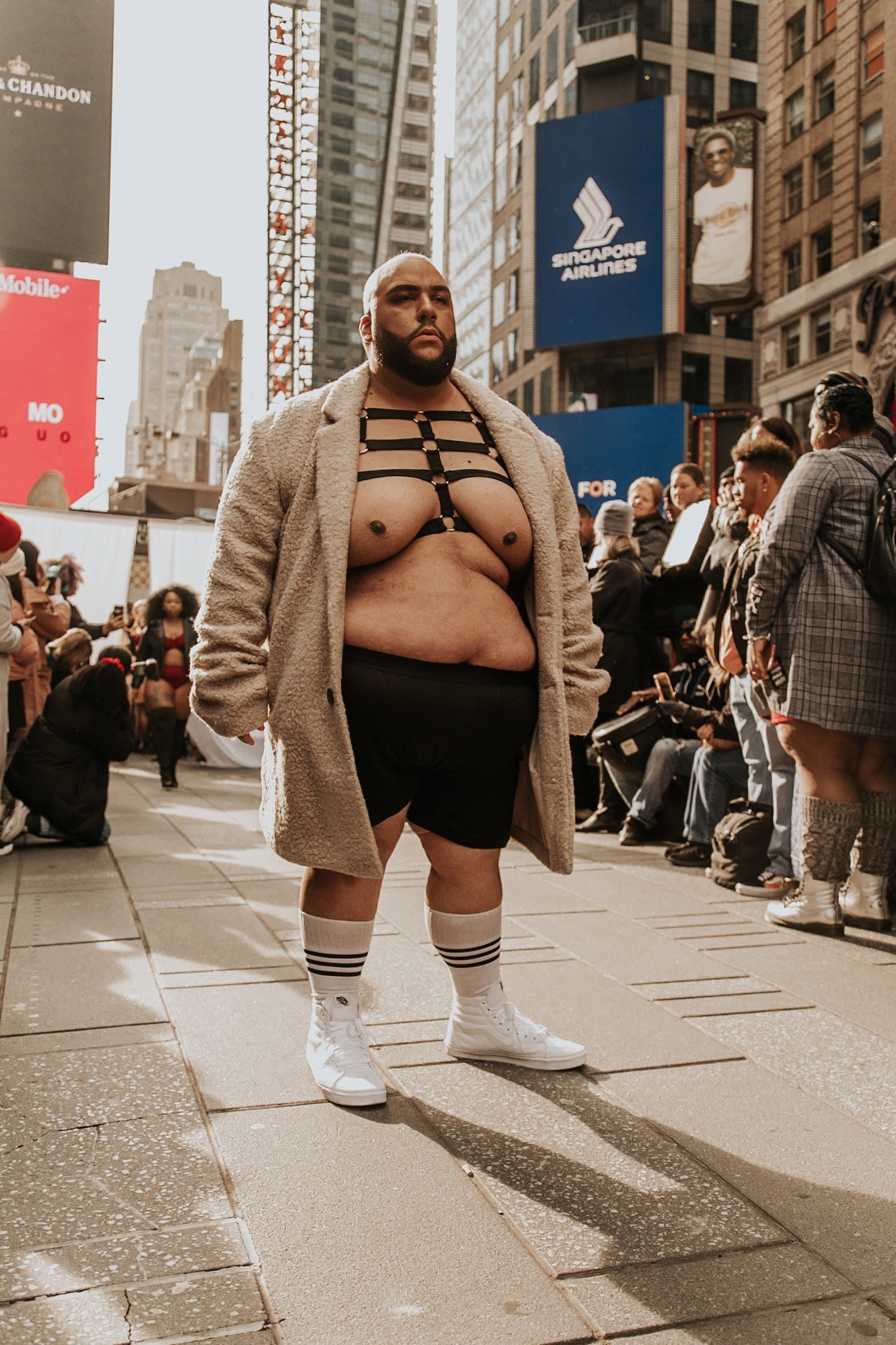 “Participating in this runway meant I was able to be the representation we don’t see or have in media and fashion, me being the largest in size active in the industry currently there’s no public representation for people like me and I wanted to be that, that day in raw form. I walked for everyone, my Latinx, LGBTQ community, visibly plus people of Size, the disabled and mental health. All of these are a piece of me in some shape or form.”

“Fashion is not a label, it is way to express ourselves as we came to this world with imperfection.” 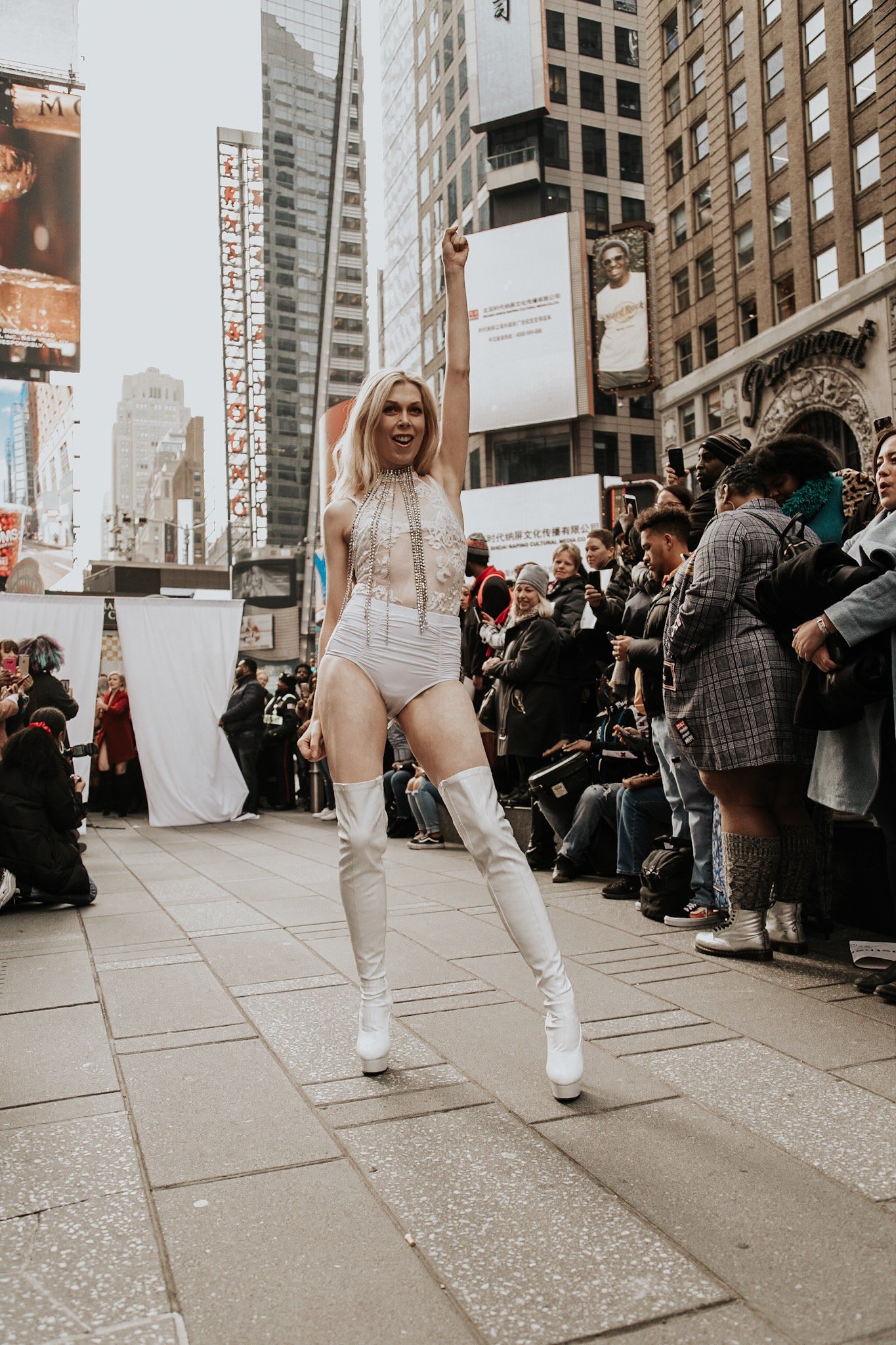 “I believe that we all should love ourselves exactly as we are. As a woman of trans experience, this is something I used to struggle with and by participating in and being able to close The Real Catwalk, I want to show the world that we should be proud to be who we are no matter what our identity is.”

DevDoee
Pronouns: Honestly all of them or none of them. Just don’t call me dude. 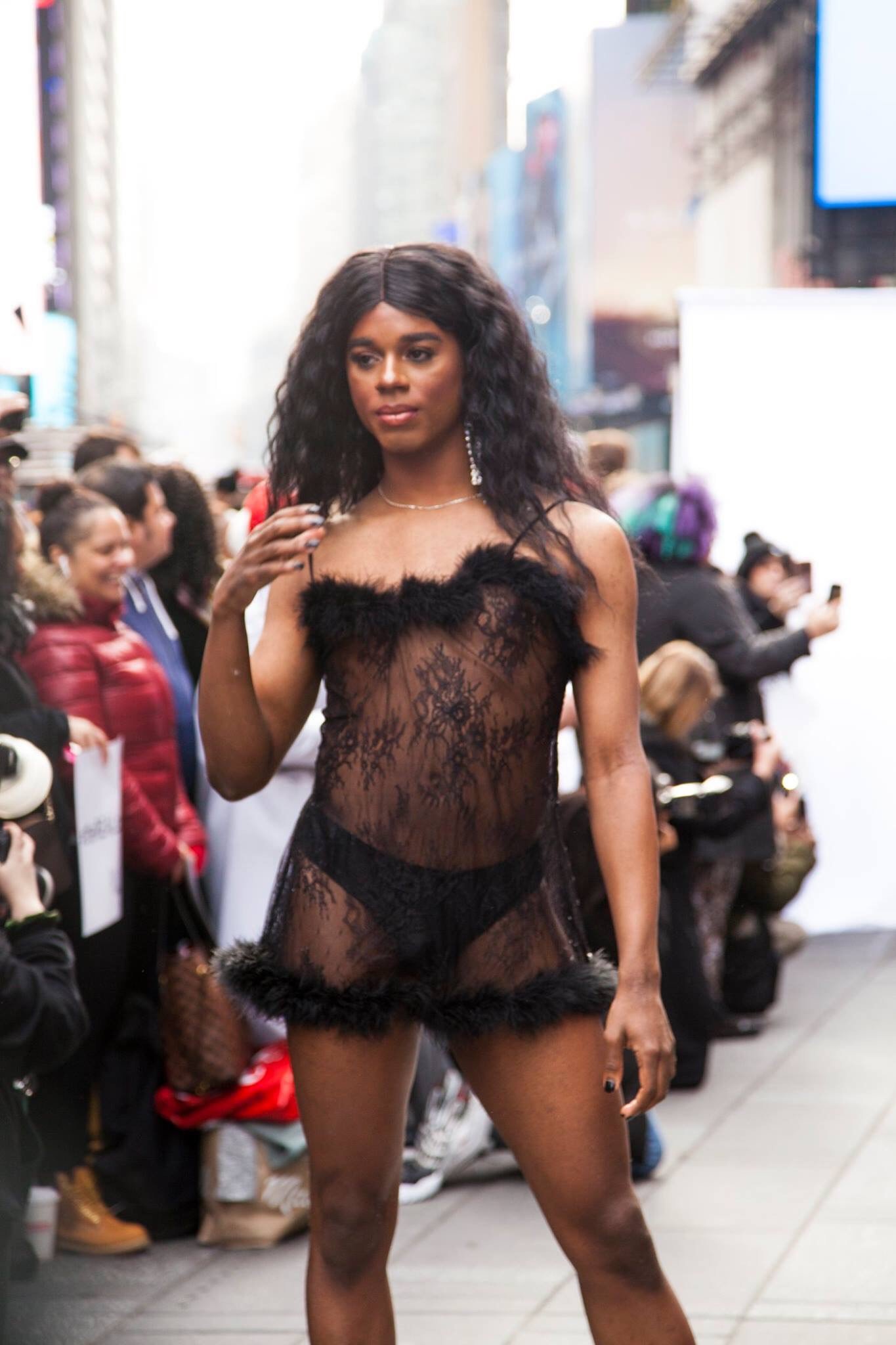 “Walking this runway being unapologetically myself in the middle of Times Square is a dream. I felt so empowered and inspired by all of the beautiful, diverse, and important bodies that were represented. I hope that my presence is able to let people see that it’s important to own your truth loudly and proudly. We only have one body so let’s love it fully!” 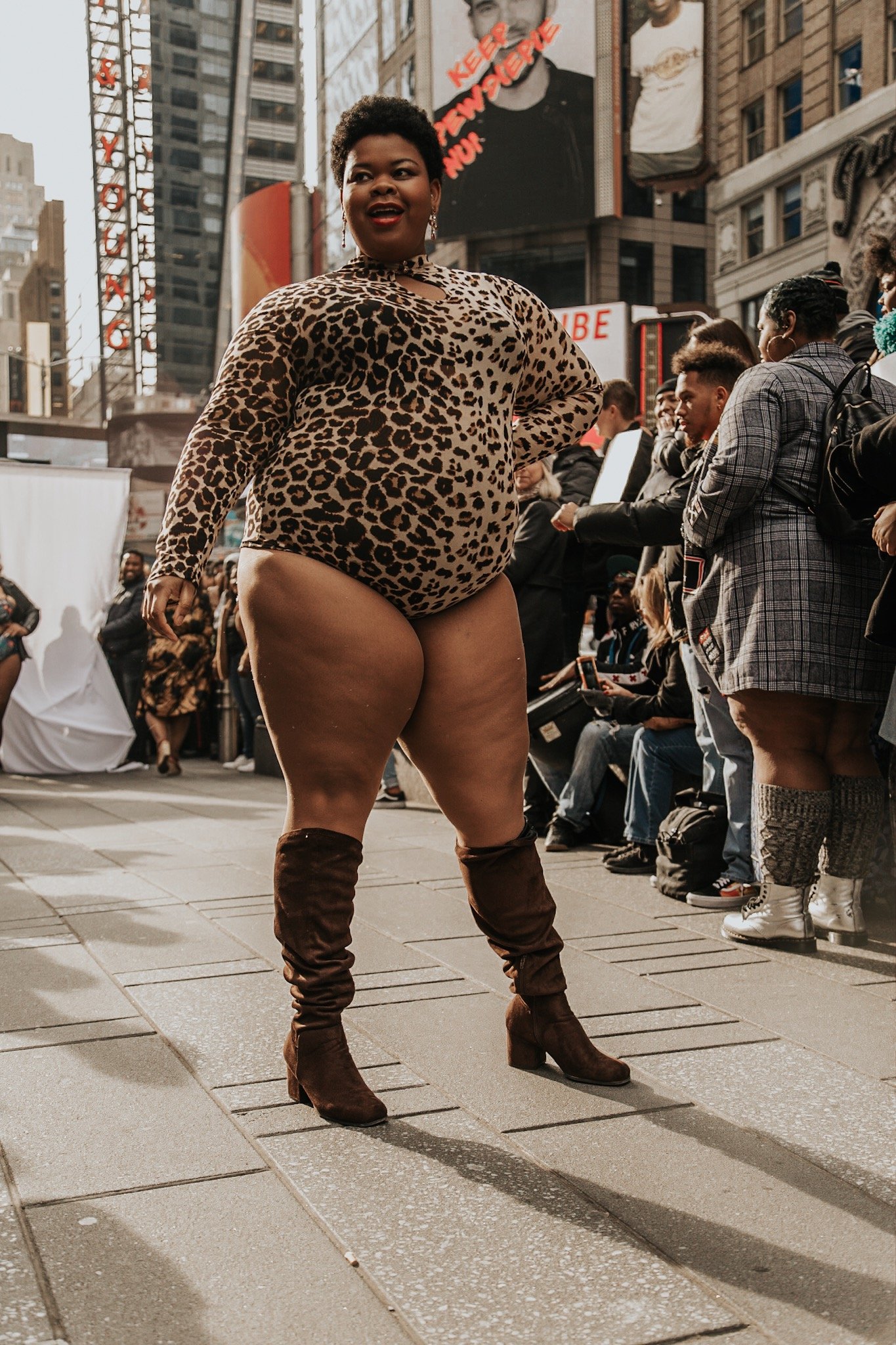 “Being a model in #TheRealCatwalk was such an empowering and uplifting experience. The show for me was about inspiring others to accept themselves! I was so grateful to have crossed paths with such beautiful people representing all walks of life!” 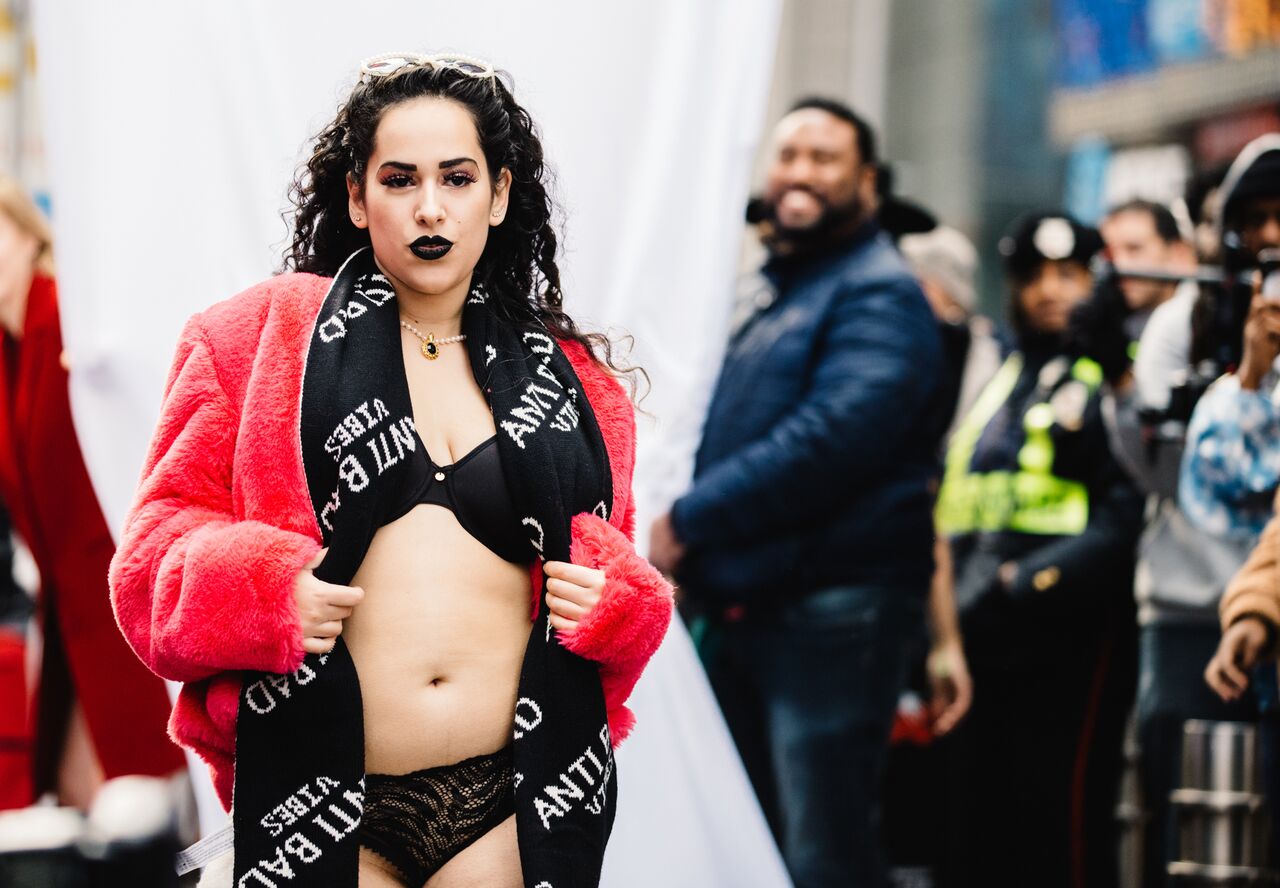 “Participating in The Real Catwalk allowed me; a 21 year old, Greek American, non-exclusively open bisexual female; to be featured on a platform in which my intersectional diversity and raw beauty was celebrated. My main focus; while strutting down Time Square, one of the most notable domains in the World; was to highlight the organic glamor of our eclectic, wide ranging society. The overarching goal of The RealCatwalk was to present to the public a rewritten standard of what “true beauty” looks like coming from a multitude of differing backgrounds including people of color, lgbtq+ folk, and immigrants; who, unfortunately, do not fit the provincial ideal of the conventional beauty standard. By walking half nakedly down our makeshift runway, I felt as though I had brought forth a deceleration of liberation against the adherence of archaic ideals of beauty.” 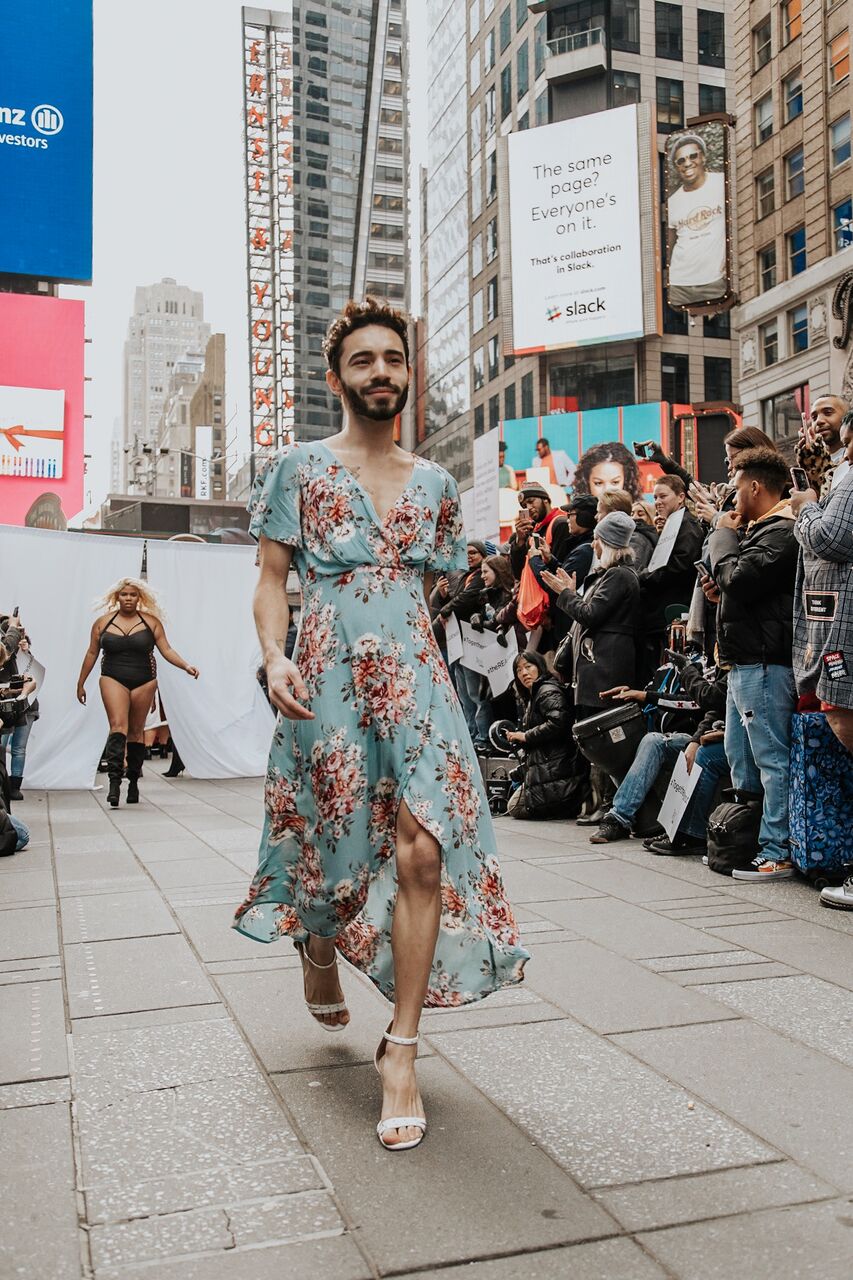 “The Real Catwalk to me was an opportunity to show the world that gender nonconforming individuals are valid and beautiful. What little trans/gender nonconforming representation we have in the media is very focused on either side of the binary, and though I respect and enthusiastically support such individuals who brave the other side of the binary, there is a middle grey area for those who are in the process of transitioning or simply don’t follow the rules of gender at all that is completely ignored. And so, I felt it was my responsibility to proudly don my beard while strutting down the runway in a dress, heels, and tiara. You don’t need to shave, wear makeup, or change your body shape to be a princess; you simply need to have courage and be kind.”