Nothing pleases us more than when a legitimate androgynous, tomboy, and/or masculine clothing company that caters to our readers pops up. dapperQ is regularly bombarded with aspiring brands that want us to feature their new t-shirt or snap-back line. And, while we support these brands in general, they do not address many of the fit and style needs of our more fashion-forward readers. Enter Scout’s Honor, a new tomboy-style line based in San Francisco. Founded by Clare Marie Myers, Scout’s Honor defines tomboy in a way that is refreshing and different from very stereotypical notions. Their current collection focuses on button-up shirts, but they intend to expand. We caught up with Clare Marie to find out what inspires her line, what makes her collections different from other tomboy brands on the market, and what we can expect from Scout’s Honor in the future. 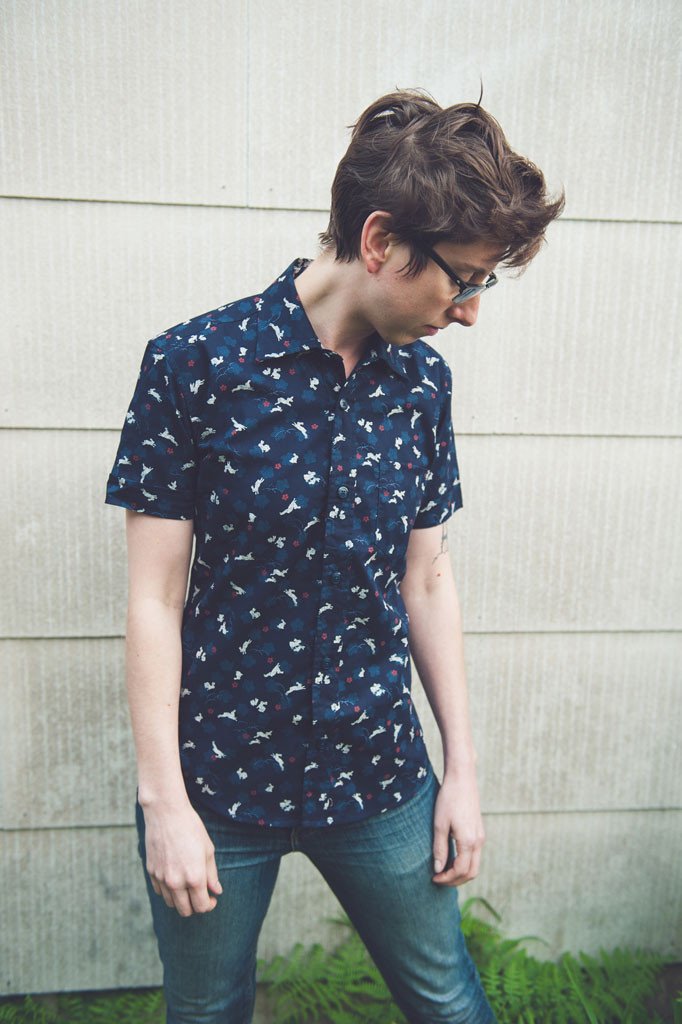 dapperQ: Can you tell our readers about the history, evolution, and mission of Scout’s Honor?

Clare Marie: Scout’s Honor is the result of me deciding to stop putting off my dreams. I’ve been fascinated by clothing all my life; I love to design and style and sew, but I’m also really fascinated by how much work it does in communicating who we are, where we stand, what we stand for. I’d originally planned to pursue a Masters in Fashion Journalism at the London College of Fashion, but then life happened, and that didn’t. I kept telling myself, “Work a few more years, save some money, then you can finally go to fashion school full time.” But it was always “not yet, not yet”—not enough money saved, not enough security. In my day job, I work with students with disabilities at City College of San Francisco, and occasionally I’d find myself working with a student from the fashion department. They always had great things to say about the program, so I decided to check it out, and it really is great. The equipment and technology isn’t as current as it might be at the private schools in the area, but the professors are world class.

I started taking classes part time—pattern-making, illustration, whatever I could squeeze into nights and weekends. Pretty early on, I jumped into a class called Creating a Garment Business, more because it fit my schedule and I knew I wanted to start my own business eventually. But, by the time I was done with the class, I had a blueprint for how to proceed. One step in front of the other. So I took the steps. I’d already designed a collection; now I needed to figure out how to have it produced. My limited resources meant I needed to seriously narrow things down, so I decided to focus on button-ups. (Someone once said to me “The world can never have too many button-ups,” and I’d like to think that’s true.) Over the summer of 2013 I ran a successful Kickstarter campaign that allowed me to produce these first three styles. I worked with a small, family-owned apparel factory here in San Francisco to complete my first production run. At this point I’m looking ahead to Fall 2014 and dreaming a lot about flannel.

My mission is multi-faceted, but it is always about connection. As a designer, it’s my goal to make clothes that people will connect with, relate to, clothes they didn’t yet know were missing from their lives. This may sound a little strange, but I want to design clothes that are like new friends who immediately feel like old friends.
As a small business woman, and as a creative person in general, my mission is to connect with others, to learn from them and to give back to them whenever I can. I organize a bi-monthly networking and support of about a dozen female entrepreneurs in the early stages running a businesses, which has been incredibly beneficial to all of us. I love collaborating and skill sharing—I say yes to way too many projects, but they are always so rewarding. My big project this year was collaborating on a video Lookbook with director Ryan Peters Castañeda (www.bluedecember.com). I’ve learned that creativity and goodwill compounds upon itself. You go out there, you do things, and people want to do things with you. Create, connect, support: that’s Scout’s Honor in a nutshell. 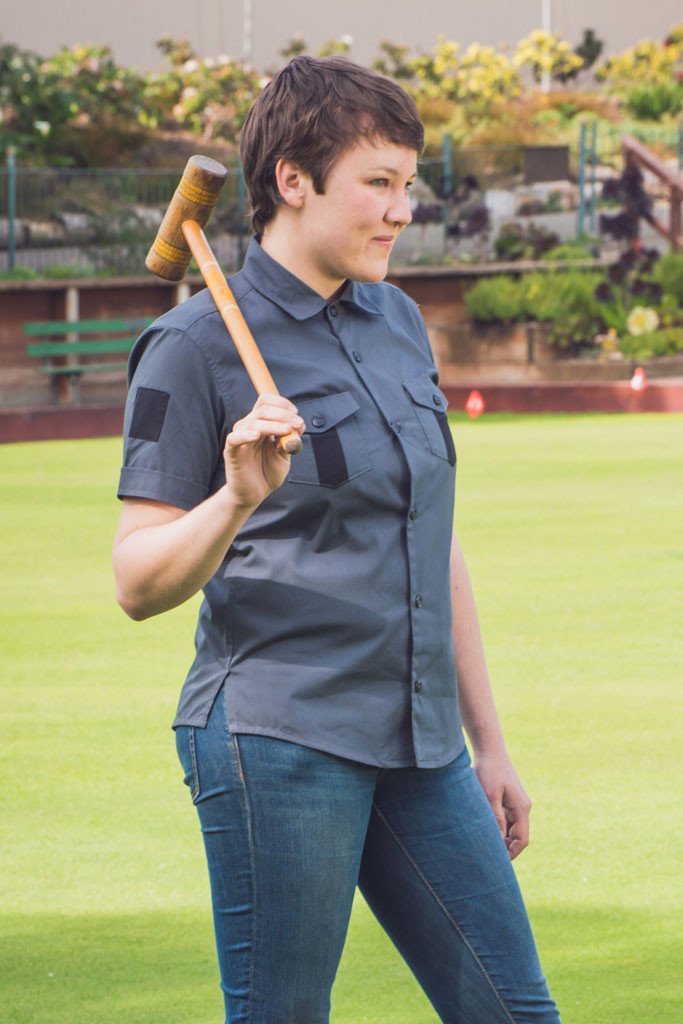 dapperQ: How did you come up with the name “Scout’s Honor?”

Clare Marie: Writing and literature are my first loves, and Scout Finch, the narrator of To Kill a Mockingbird was an inspiration for the line since before it had a name. I considered naming the company after some other iconic, literary tomboy—Jo March, Anne Shirley, Pippi Longstocking, Idgie Threadgoodee, but—perhaps because they’re all a bit older?—none of them are as quintessentially tomboy as Scout. So Scout’s Honor is a reference to Scout, both her style and her (sometimes complicated) spirit of gender outlawry. It’s also a reference to the scouting movement, again, both its aesthetics and its mission. For as problematic as the modern day BSA might be, there’s a lot to admire about its origins, especially in the writings of Lord Baden-Powell, the founder of the scouting movement (who may or may not have been into dudes). So basically, I’m a big nerd.

dapperQ: How would you describe the Scout’s Honor aesthetic?

Casual, classic menswear. Uniforms. Books. The Tomboys of tumblr. Walking around San Francisco—the busy neighborhoods, the quiet neighborhoods, the parks. Thinking about how small changes can make a big difference. A deep and abiding love of plaid.

dapperQ: How does Scout’s Honor stand out from some of the other tomboy lines that have been launched over the past few years?

Clare Marie: Well, it depends on how you define tomboy—I just wrote a big piece about this, and concluded that tomboy is a lot of different things. When it’s related to butch, it might be more feminine, or more youthful, but it doesn’t need to be (and often isn’t) both at once. It’s also not exclusively a queer term in the way that most of probably consider butch to be. So for me, even though I’m coming at my designs from a queer perspective, I’m happy when they appeal to queers and non-queers alike.
My aesthetic isn’t as edgy or trendy as some of the new queer/tomboy lines, but design is just as important to my line as fit. There are other folks who have the basic button-down covered, which is awesome. My goal is to play with that, to approach it from a more light-hearted place. Scout’s Honor has a youthful spirit—which doesn’t mean the people who wear it are, or should be, young. In fact, I’ve found that my customers have a much wider age range than I’d initially expected, and I love that.

dapperQ: Many of our readers have problems finding masculine clothes that fit them properly. How is Scout’s Honor addressing this issue?

Clare Marie: There are a couple different problems here (all of this is specific to button-up shirts; we can talk about pants another day.) For folks like me, who are slight and small-framed, even small menswear tends to be over-sized, and large boy’s wear just isn’t proportioned right—the sleeves are always way too short, for one. There there are curvier folks, who find that menswear is too tight in the hips and/or bust, or else over-sized in the neck and shoulders—or both! I’ve worked to address both those concerns with this line.
Currently, the Scout’s Honor line runs from XS (roughly a 2-4 in “standard” women’s sizing) up to an XL (roughly 18-20), and the neck and shoulder measurements are in line with this sizing. All the styles are specifically patterned to accommodate curves without the use of darts. The shirts have bowed side seams, vents at the hips, and some tension had been released at the armholes—which translates into more room in the chest. The Wrangler in particular is constructed so that the style line does the work of a dart without looking like one, so it fits folks with full chests without strain or the dreaded button gap. 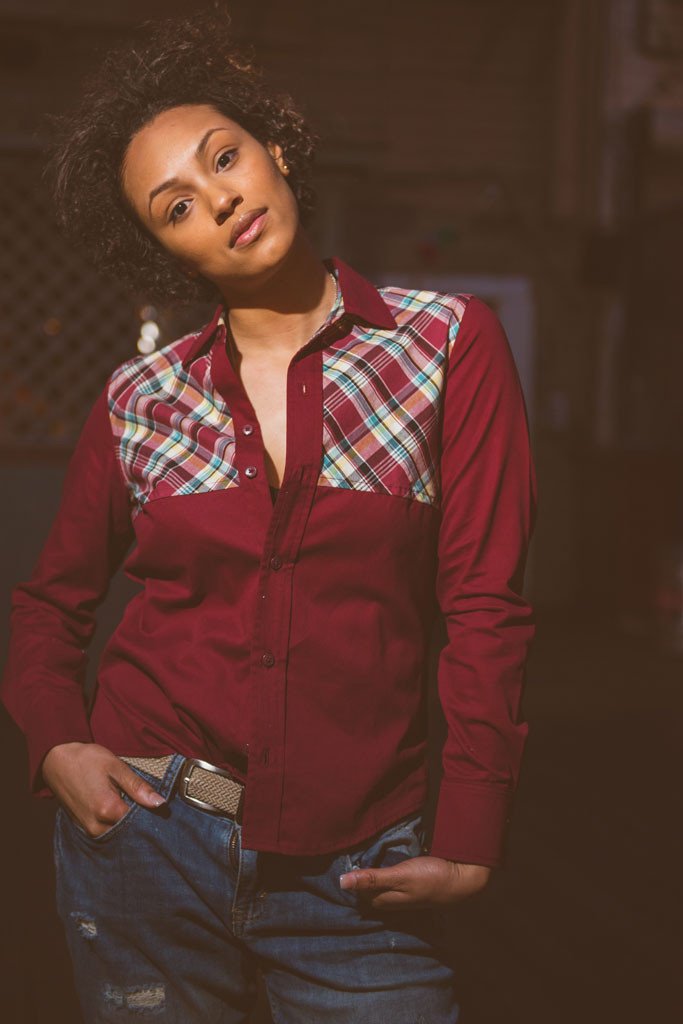 dapperQ: What can we expect next from Scout’s Honor?

Good questions! There are so many project I want to pursue, so many places I want to go in an create well-designed, well-made, well-fitting tomboy things. Jeans! Shoes! Bags! And I also want to continue to play with and push the button-up. Over the last six or eight months, I’ve been so caught up in production and merchandising—not to mention the video project—that new product development has taken a back seat. Now that things are up and running, I plan to take a couple months to just design, design, design, and allow that process to tell me where to go next. And of course there are always those pesky questions of time and money. So I guess the short answer is: wait and see! (and support the company so that it can continue to grow!)