Feature image via Where to Get It

… I swear I do. Which is why I am always shocked when I am mistaken for straight. Even if someone misses that distinctive ‘queer’ scent on me, I figure that my outfit will always be the giveaway… but apparently that is not always the case.

Though I do not necessarily categorize myself under any of the typical labels, most of my friends would call me ‘femme,’ meaning that am comfortable in dresses/ skirts and present more on the ‘feminine’ side of the spectrum. While I do not completely disagree with this assessment, I would more accurately call myself a boho tomboy. I look to Jimi Hendrix, Patti Smith and those who prefer the nomadic lifestyle for inspiration.

I see the way I choose to dress as very different from mainstream, heteronormative style. Somehow, even when I ‘femme it up’ I’m still a little edgier, a little less traditionally feminine. I might wear a super sweet soft flowing dress, but it only looks right if I pair it with combat boots and tons of spikes. The newish phenomenon of ‘boyfriend jeans’ (although, dapperQ is not a fan of the term) is right up my alley because I’ve been wearing men’s jeans… well men’s clothes in general, forever. I understand that I am read as ‘quirky’ or ‘different,’ but, outside of the LGBTQ community, rarely gay. 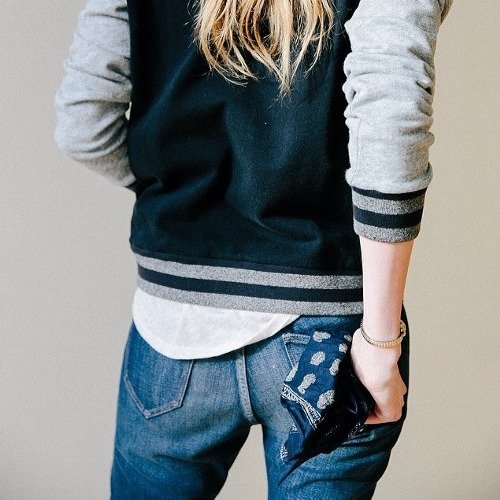 Historically, LGBTQ people used physical signifiers/ fashion items to be able to identify one another, for example the subtle pinky rings, without ‘outing’ themselves to the heterosexual mainstream. As a recent Autostraddle article pointed out, femmes, who are often assumed to be straight, use signifiers even when they are ‘out’ in order to be more visible within the LGBTQ community.

So the question is now what makes a person ‘look gay?’ I mean, is there such a thing as ‘queer style?’ (Our Editor in Chief and Sonny of Qwear attempted to define the enigma of queer style for Posture magazine here.)

While, I do recognize that for the most part no clear distinction between straight and non-straight individuals can necessarily be acknowledged, I have observed certain queer style signifiers:

I realize that as it is with every rule, there are exceptions to this list. However, these are things I think of when defining the vastness that is queer style.

Written By
Cee Sando
More from Cee Sando
Aside from perfect weather that causes some major East Coast envy on...
Read More