It’s official! No one on the corner has swagger like dapperQ, as evinced by the group of sweltering hot models I lined up for this edition of He Said/We Said.  The March 2011 HS/WS roster reminds me exactly why it is that dapperQs make my heart thud (a reaction that Susan Herr inspired me to examine more thoroughly with her “Butches Conceit” performed recently at Boxer’s Off.) This posse is my response to anyone who has ever asked me that predictable and lame question, “Why don’t you just date a man, then?” 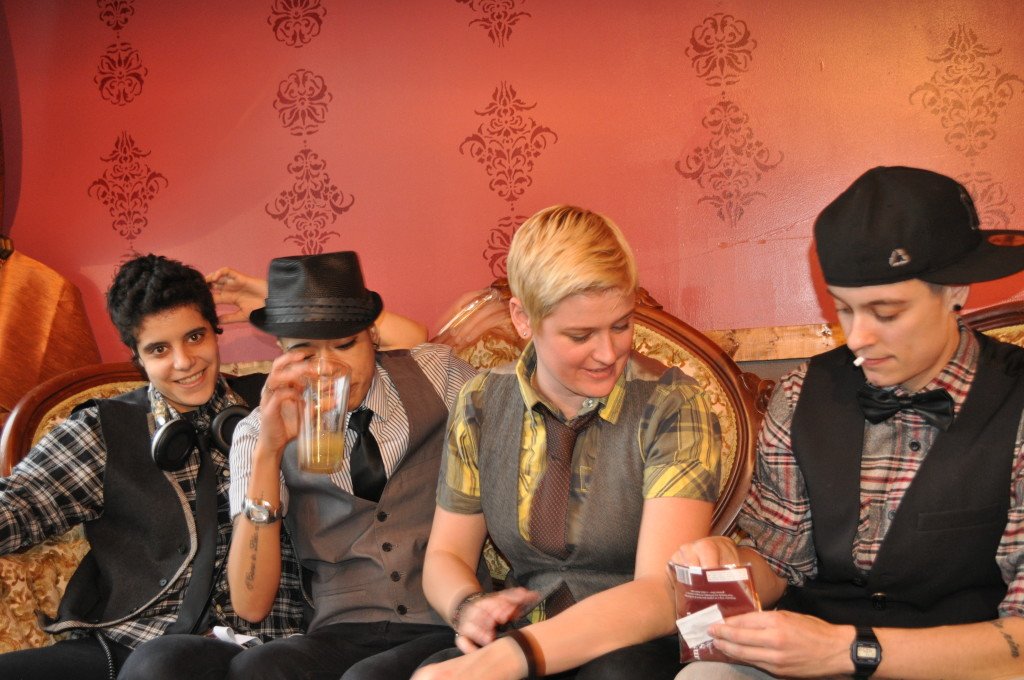 WHY? Well, first off, because I’m a lesbian. But, the question is usually stated in such a way that it comes off as being a criticism of my “type”, to somehow imply that, regardless of sexual orientation, a woman in “men’s” attire is inferior to a man and less desirable than a more feminine woman. This narrow, rigid point of view prevents some from seeing that dapperQs posses a mysterious ruggedness and exude a type of confidence that is earned only by those who proudly march to the beat of their own drum. And, let’s face it. In a traditional patriarchy, the hetero-normative male has the prizes handed over to him on a silver platter. But, those of us with taste know that nothing worth having comes easy.

These models’ fearless courage gives them a sexy edge that cannot be easily purchased or imitated. Or, as Diva Magazine put it, this particular (and now coveted) look “is more about intangibles such as posture and attitude than it is about clothes.” Not convinced? Just take a look their individual dapper interpretations of a Spring 2011 John Varvatos men’s ensemble (pictured left.)

Special thanks go out to model and photographer Sabrina Haley, whose photos have been seen in Physics Today, GO Magazine, IKEA, Curve, OSTV, AfterEllen, Time Out and many other publications. Her unique portraits have been used as publicity for musicians, album covers, fashion designers, actors, theater companies, menus, events and more.

Thanks, too, goes to Branded Saloon, for providing space for the shoot.  Branded is owned by Deborah Bicknese, a sexy dapperQ who also owns one of the most excellent restaurants in Brooklyn known simply as Beast.  It has  earned notice as a  Top Pick in The New York Times, inclusion in the Top 5 Brunch Spots in New York City from New York Magazine, and was nominated in the Reader’s Choice Awards for Best New Brooklyn Restaurant in Time Out New York.  Eat at Beast and walk across the street to party at Branded.  Tell Deb dapperQ sent you!