Set to launch in September 2015, Eden’s Garden will be the first scripted web series about trans men of color. Writer and producer Seven King created the series to address the lack of trans, racial, and ethnic diversity in both mainstream and LGBTQ media. dapperQ sat down with Seven to get the inside scoop on the inspiration and style behind the series. *Feature image by Asher Torres.

Seven: Eden’s Garden is an independent film project in the LBGT community. Our goal is to connect to all different walks of life, by sharing the unspoken realities lived under the radar. Eden’s Garden is a story told from the perspective of transgender men. This impactful drama web series will change perception on many levels, as the viewers get to see the daily struggles, accomplishments, relationships realities, and the general journey of men of trans-experience. Eden’s Garden is focused on many socially relevant topics, such as trans-reality issues and struggles: dating and relationships; HIV and AIDS; discrimination; friendships; and betrayals. This will be a suspenseful journey in each of the lives of the starring trans-men in the series.

Eden’s Garden will be launching September 2015 and is starring all transgender men who are Black and Latino, who’ve done an amazing job bringing these characters to life. I am also so grateful for the hard work of my creative team: Marin Watts, who has been producing and directing with me; Ebony Felder, our Assistant Director; and everyone on my team that made this vision come to life!

Seven: I’m an artist. I am a visionary. I am a revolutionary at heart. I am also a transgender male. Expressing the story of my own personal experience, which also represents the story of millions of transgender people regardless of color, is an intimate project to produce and I’m excited to showcase Eden’s Garden for the world to see. I feel in the media, there is a trans revolution going on and the timing is perfect for a show like this. Even though the transgender story is being talked about a lot more now, the story of the trans-male is less visible. America is a culture that has a dynamic story when it comes to humans, race, and politics, and transitioning as a man of color is just one of the stories that needs to be told.

dapperQ: Why did you name the show Eden’s Garden?

I decided to name the show Eden’s Garden because the Garden of Eden is a story known across the world. Whether it’s a story you believe in or not, I liked it conceptually as a story about origins. I feel that gender identity has an origin for every person who may be trans. For me it was at age four, when I identified my gender to be male. The Garden of Eden has a mystery that carries on to this present time. In that garden, there could have been anything; Then, I think to myself, the story of trans men or transgender people could have been a story in that tale that’s never been told. Eden is one of the main characters within this series. Eden’s Garden is how I connected the two for the title name of the series.

dapperQ: Can you talk a bit about the lack of visibility and storylines for trans men of color in scripted television and how Eden’s Garden is addressing this?

Seven: There is a need for more visibility for trans men of color and I feel the lack of scripted shows in general for people of color is prevalent in both the mainstream and LGBT communities.

Right now, transwomen have been the forefront of most conversations and media due to the fact that they are suffering from high murder rates and the violence that has been done to them. Transwoman have always been the forefront in activism and the fight for justice and it’s carried over to the media. But, the trans experience is a very different experience for someone who was assigned female at birth and transitioned to a Black man or Latino man or any man that happens to be of color. And we would like to explore this perspective. America is a culture that has had its own history of oppression and racism, and there is an entirely different storyline for a Black man in this country. And life for a trans-male can be very different from a cis-male. There are different hurdles to overcome: health factors, employment factors, disclosing your trans identity or not disclosing, family acceptance or rejection, document changes, and just the process of manhood is in different stages for every man, cis or trans. 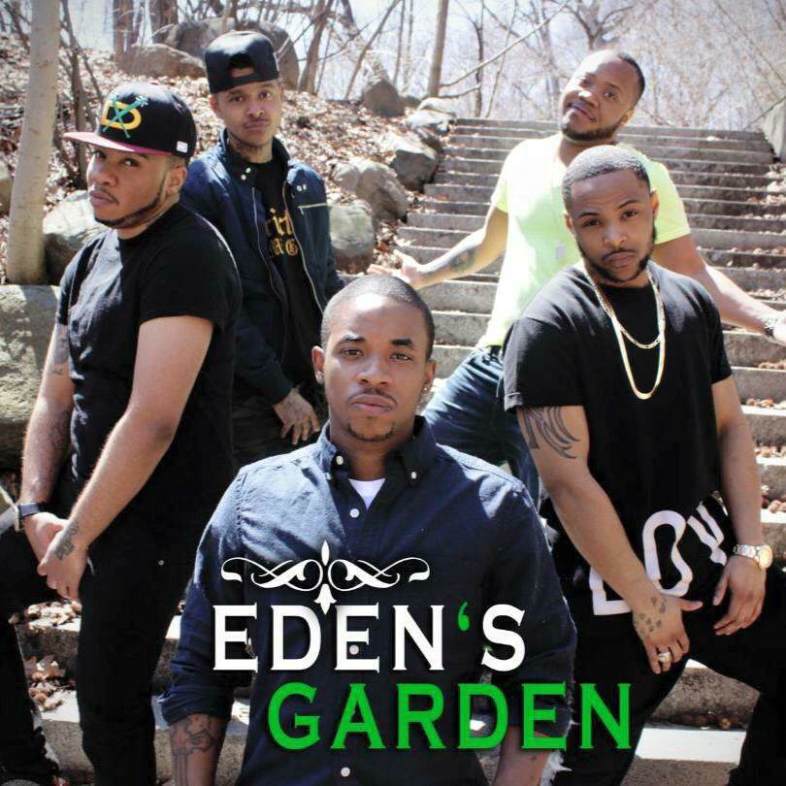 Seven: I never noticed how much subconsciously I put of some of my experiences in my writing until I have read it back. Writing is very therapeutic. Eden’s Garden has a few situations that I have gone through. I’m attracted to women, transwomen included. Before I even got comfortable to actually date and be open about my attraction for women that happened to be trans, I was mentally once oppressed by a former girlfriend who had hate for transwomen and had me emotionally conflicted for being attracted to transwomen as a transman.

dapperQ: Filmmakers are acutely aware that wardrobe stylists and costume designers are paramount to enhancing the characters’ personalities. How has Eden’s Garden leveraged style to tell the stories of its characters?

Seven: Eden’s Garden leveraged each characters’ personality when dressing. In this show, we actually let the main characters pick their wardrobe personally to make it as close to home or their character as possible. DJamel Young and Chance Lombardi, or Papo and Angel in this first series, style their snapbacks, loose fitting tee’s and gold jewelry on the regular and Bryce Richardson and Kamar Porter, or Jacob and Dre in this first series, are a little more clean cut, and tend to wear collars and polo’s. And for me, in the show, I tend to dress somewhere in the middle, clean cut or classy with a mix here or there. The style of the characters in the show are urban/hip-hop culture.  The clothes the men tend to wear are what make them feel comfortable.

Seven: I like everything clean. I like old fashion. I like fashion from the 60’s and 70’s when men use to be in suits on the everyday basis and not just for a special occasion like today. I like button downs and skinny ties. I like nice tailored clothes that are comfortable. My style represents how I feel about myself so dressing carelessly I’m not into especially as I get older. As I get older, my style seems to evolve more and my preference is to represent who I am and growth with my age. 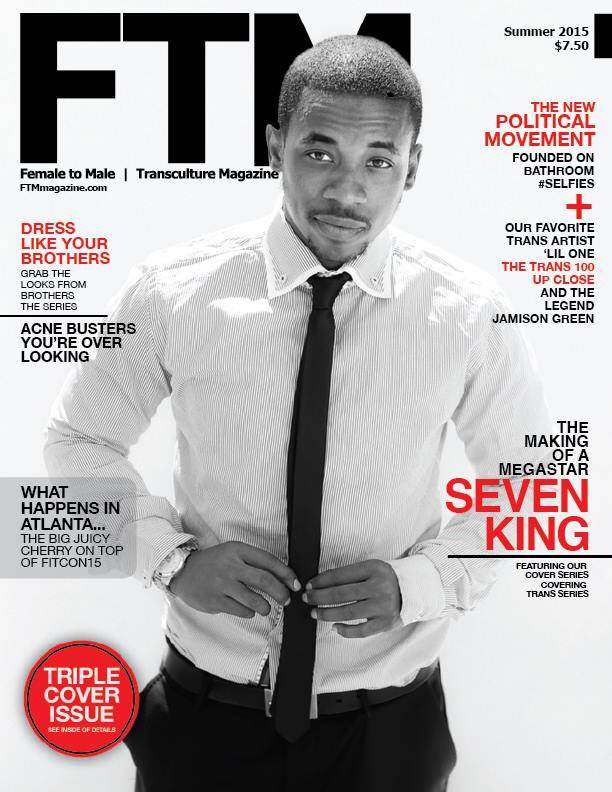 Seven: Style is an expression of personal identity. Everyday when I dress, I represent how I feel about myself inwardly. Self-love dictates the presentation I put forth in style, fashion, actions, choices and more. We live in a world where first impressions are important, significant. Even before we speak, in our heads we are sizing people up. I’m intentionally dressing masculine, that is part of my politics. It is the politics of representation. Representing my gender identity not only through my mind, my body, my spirit is the reflection of my LIFE. This is not only generic, but it is reflected in my apparel, in my style and in my dress. I believe my style represents what I believe in, how I feel and how I respect myself and want to be respected in return.

In fact, it is my assertion that the personal is always political. It’s a political statement for me to call myself Black and trans in the same sentence. It’s a statement of my somebody-ness. What it means to be Black, trans and human… It is my radical subjectivity. I feel this series is personal, intentional and political. Life we will experience all of the above. I’m intentionally bringing the story to the forefront of transmen for the media and world to see the visible face and story of the human being that happens to be a transman.

dapperQ: Where can our readers find you when you’re not working on Eden’s Garden?

Seven: I was born and raised in New York City. You can find me in the Village, where I love to spend time at the pier an just write, think and people watch. Especially since I create films – inspires some of the characters in my work. I’m always on the move. The boroughs that I visit the most, are Brooklyn, Bronx and Manhattan.  The Bronx that’s where I was born, that’s where I live and that’s one place you can find me. Last year, I completed a community level project as a documentary of the house ball community called the Rebirth of Paris; You should definitely check that out! I’m one of those people who at times gets lost in my reading; At the moment you can find me lost in one of my books. I’m an artist: anything with creating, filming and writing is who I am and what you can find me doing. I’m a traveling man, I travel a lot. You can also  find me at a studio or my home constructing screenplays that I have written or behind a camera producing film. Last, but not really last, I have a multitude of film projects streaming in my consciousness waiting for the right moment, the opportune time, where they will come into fruition. In fact im putting this in the universe, 2015 is the year of expansion

Seven: My goal is to have Eden’s Garden picked up by a major network and to expand this show globally and increase the funding for this project. We actually have a fundraiser going on right now to raise funds for our cast and crew, which you can support here.

We’ll be launching Eden’s Garden and premiering our first show in September of 2015 at The LGBT Center in NYC. Beyond Eden’s Garden, I plan to create additional revolutionary projects as well as expand my focus.

Written By
dapperQ Team
More from dapperQ Team
Welcome back to our regular feature, The #dapperQs of Instagram, where we...
Read More