dapperQ has a very extra special very dapper wedding we’re featuring this week, as the couple is an extended part of the dapperQ family: Emily and Nina! 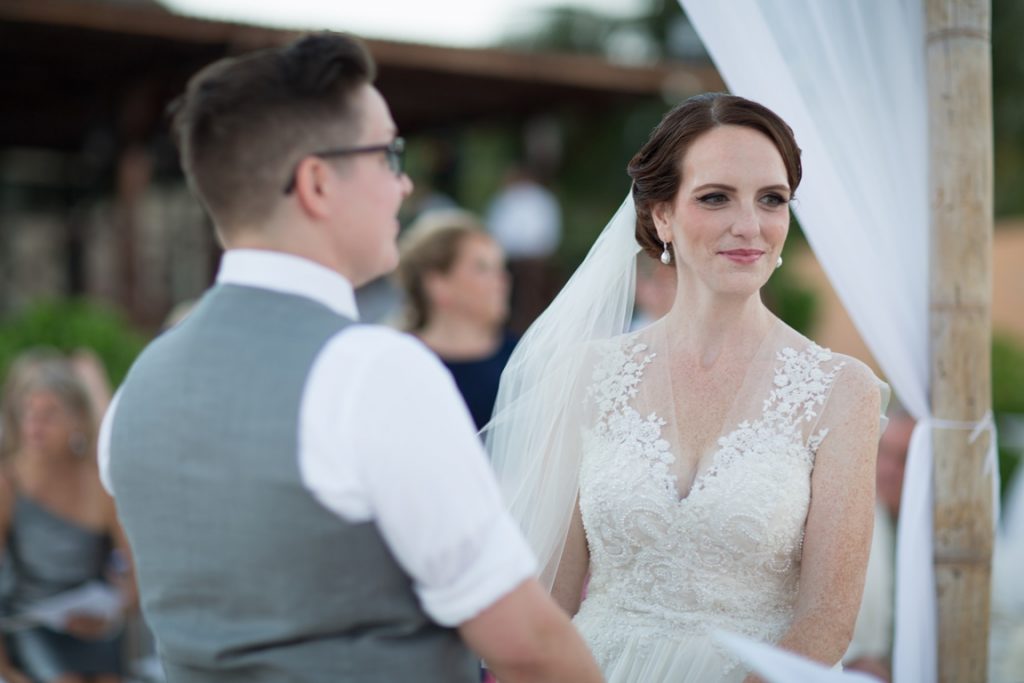 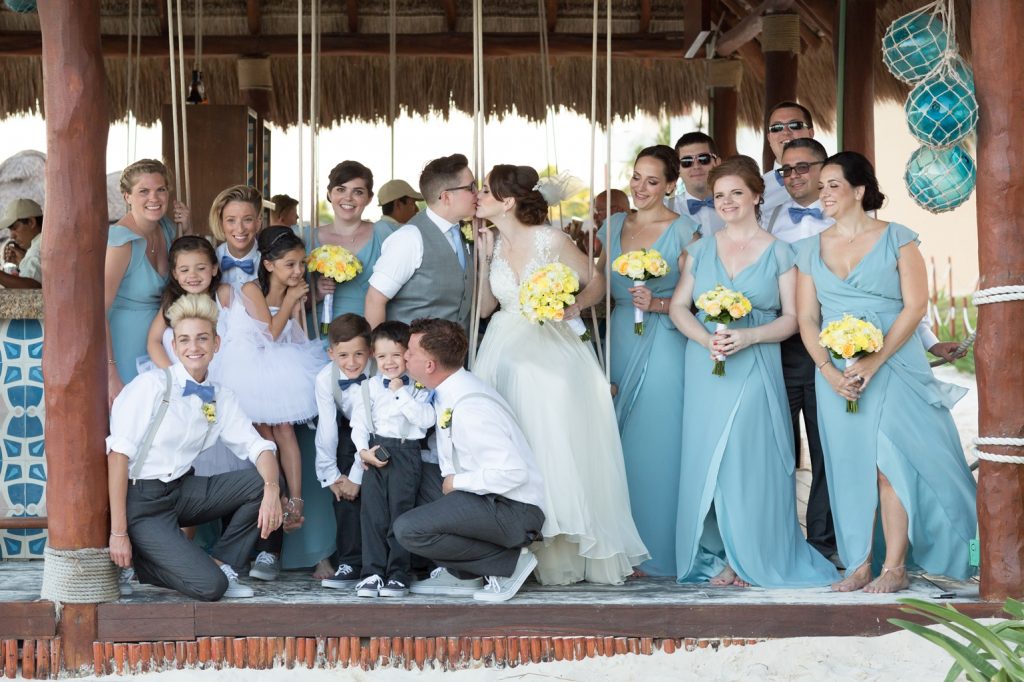 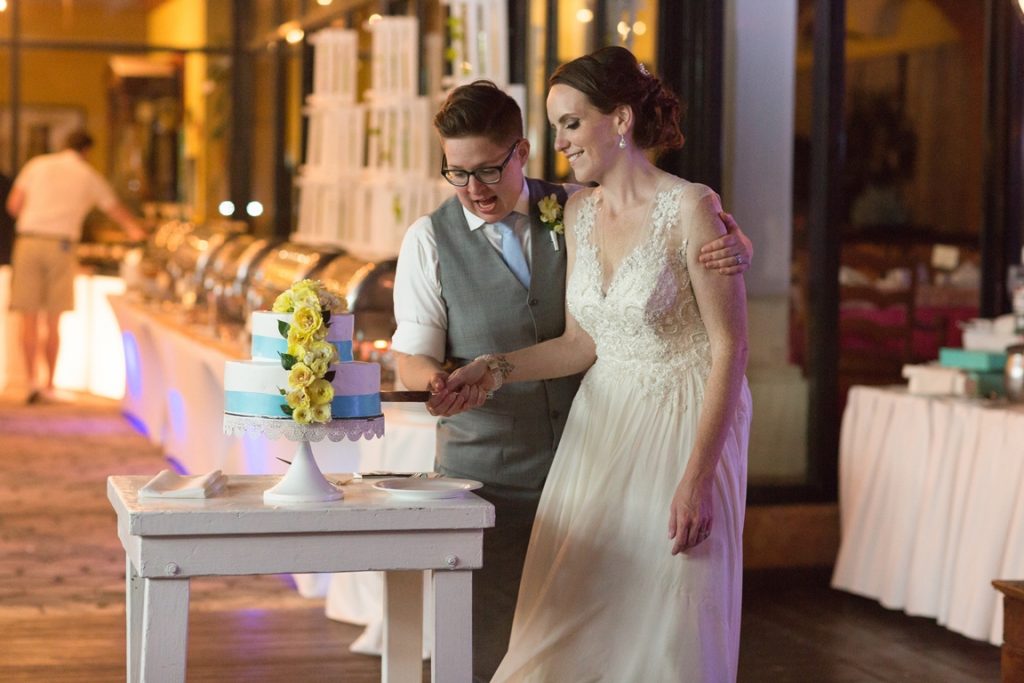 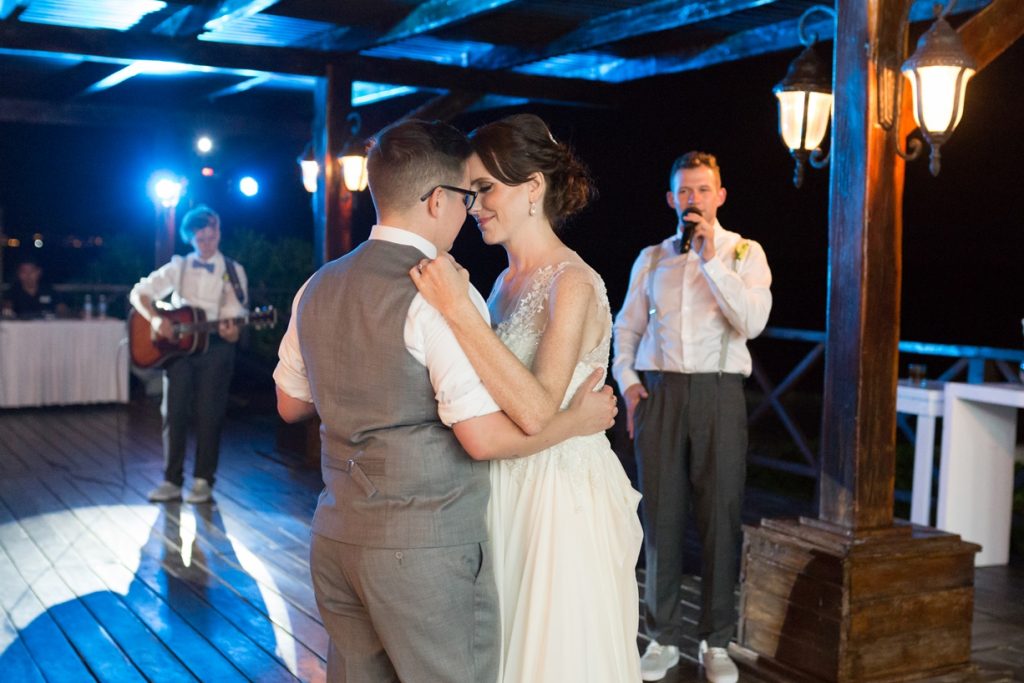 Emily: We met on OKCupid! And although Nina almost squashed the whole thing before we met up because she found out I had two cats, I convinced her that maybe we should just have a drink first.

Nina spends so much of her time taking care of other people that I wanted to give her the big romantic gesture proposal that I felt she deserved. So I asked my friends’ band Shirley House to help me orchestrate a fake concert, and still invite enough of their fans that it wasn’t suspicious. I convinced Nina this would be a great event to invite her sisters to, and a few friends were in the audience too. After Shirley House performed two songs I checked my stage fright, jumped up there, and sang a cover they had helped me remix of Nina’s favorite – “Thinking Out Loud” by Ed Sheeran.  Then I got down on one knee and had to beckon her over to me cause she still didn’t realize what was happening.  She said yes and all our friends and family came streaming in from the bar across the street and Shirley House was kind enough to continue the performance for all of us after that. Nina says I totally punked her, she had no idea.

We spent a lot of time discussing our bridal party looks but we kept our own outfits a secret from one another until our wedding day, which was fun and added some magic to the day.  Shopping for the feminine people in the bridal party was fairly easy and straightforward, especially since Nina loves weddings and would sometimes look at wedding fashion for fun long before we even met. It was much harder to shop for the masculine people because we had to get matching clothing for a whole range of sizes and genders, from very petite women to very tall guys. Pants and shoes were the biggest challenge.  Ultimately we found exactly what we were looking for but it took a long time and the selection was definitely limited.

I really enjoyed having a suit custom made for the first time. Both the process of getting my suit made and the process of picking outfits for the bridal party taught me a lot about formal wear and what my own personal style is. 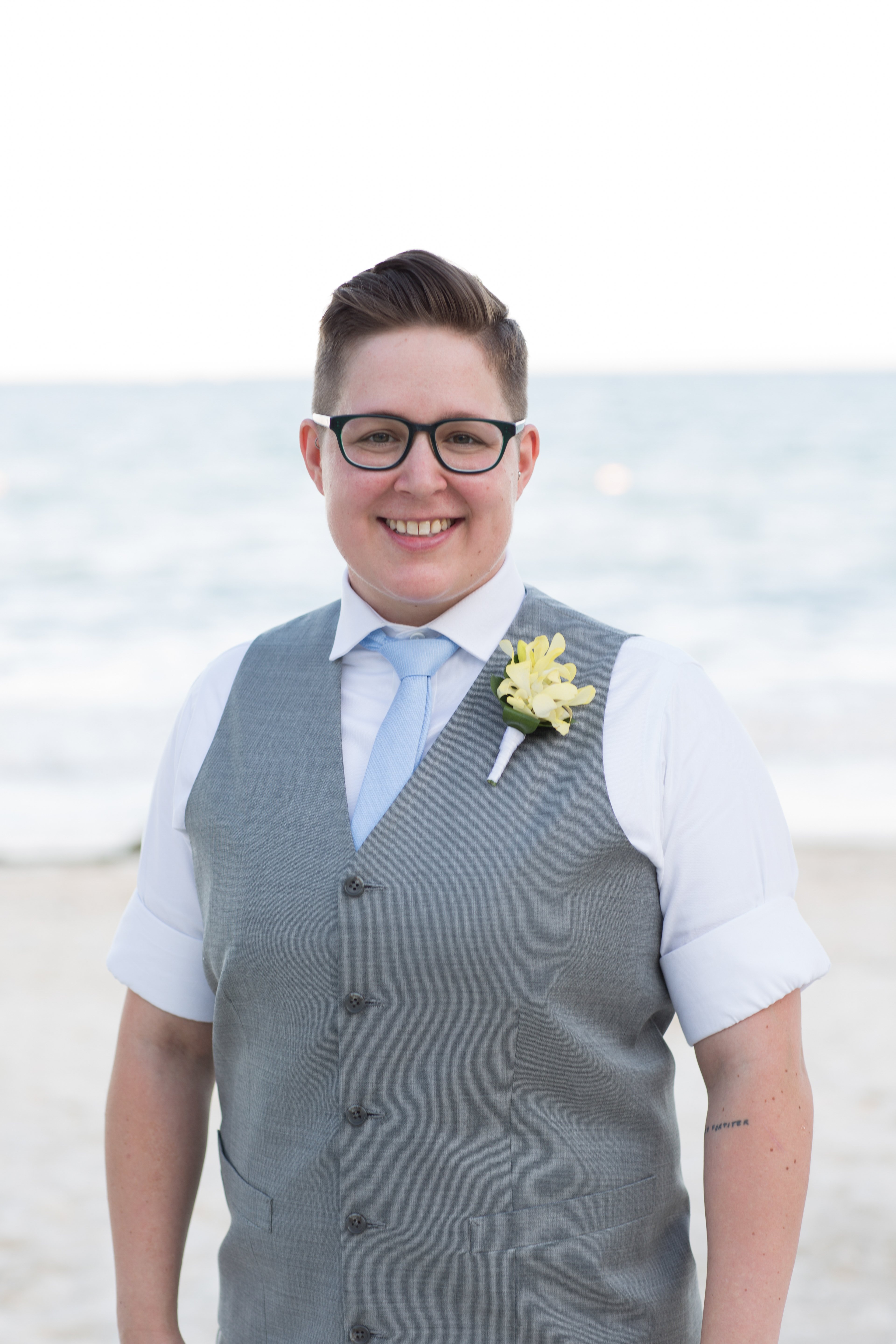 We got married at the NOW Sapphire Riviera Maya resort in Puerto Morelos, Mexico. And we were suggested this incredible, gay-friendly, family-friendly resort by our amazing wedding planner Zackary Leblanc-Amato of Liz Moore Destination Weddings, who specialize in LGBTQ destination weddings and whose resort booking services are actually free! We had done a lot of our own research when we first started looking at destination weddings and everything we found that was gay friendly was either incredibly expensive or adults-only and we knew we needed an affordable and family-friendly resort with all the kids in our extended family. Zack was indispensable and he and the incredible staff at the NOW Sapphire really gave us our dream wedding. 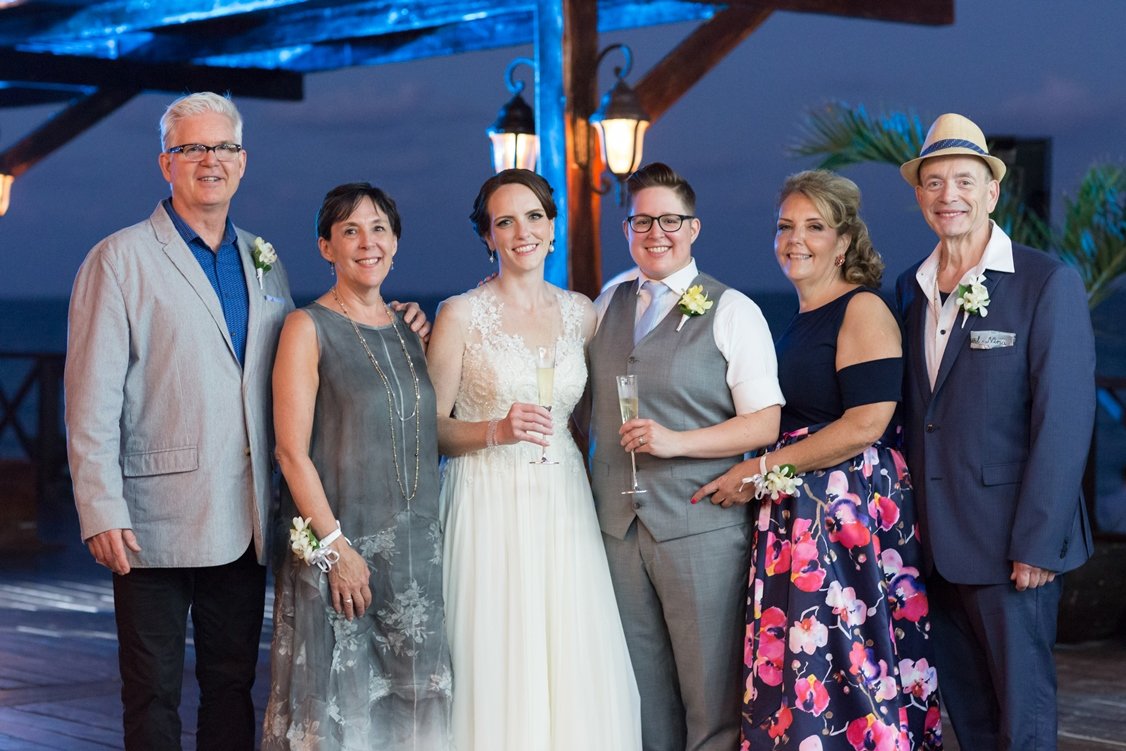 Nina: Overall dress shopping, I had a great experience. I knew I wanted something light and flowy because it was going to be warm on the beach and I didn’t want to be squeezed into a pair of Spanx in the heat! And the one promise I had made to Emily was that I would show off a decent amount of cleavage. 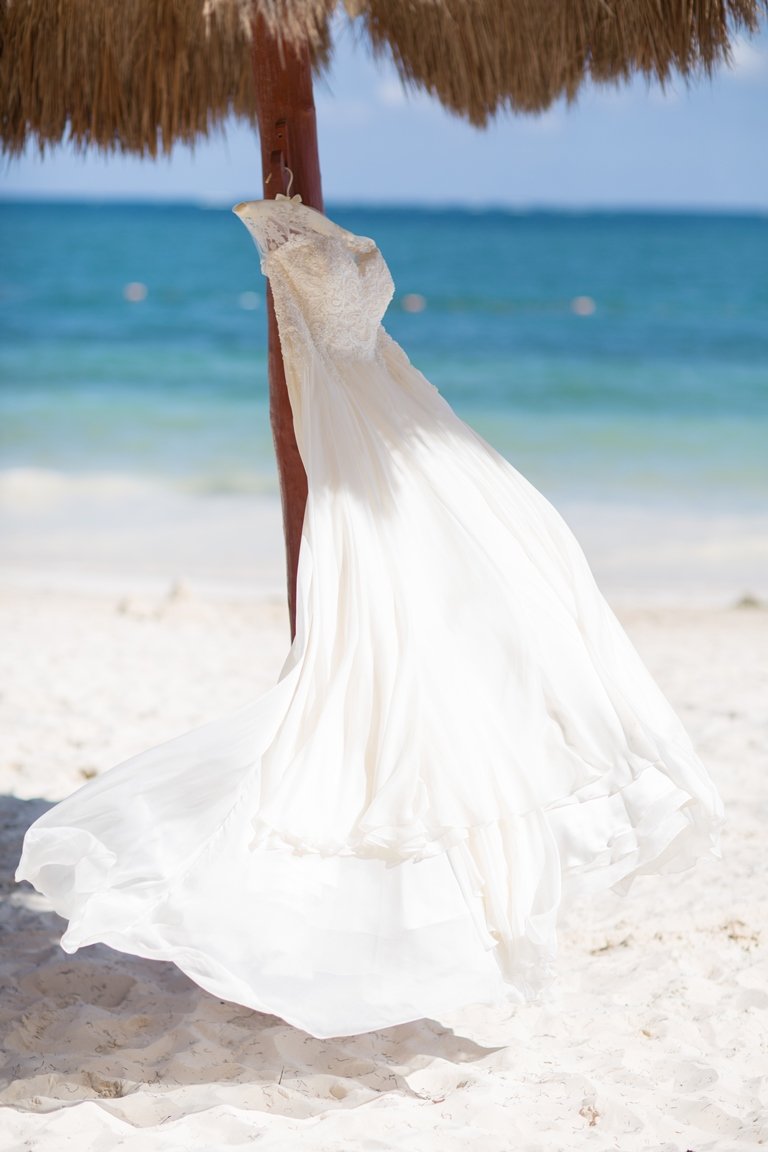 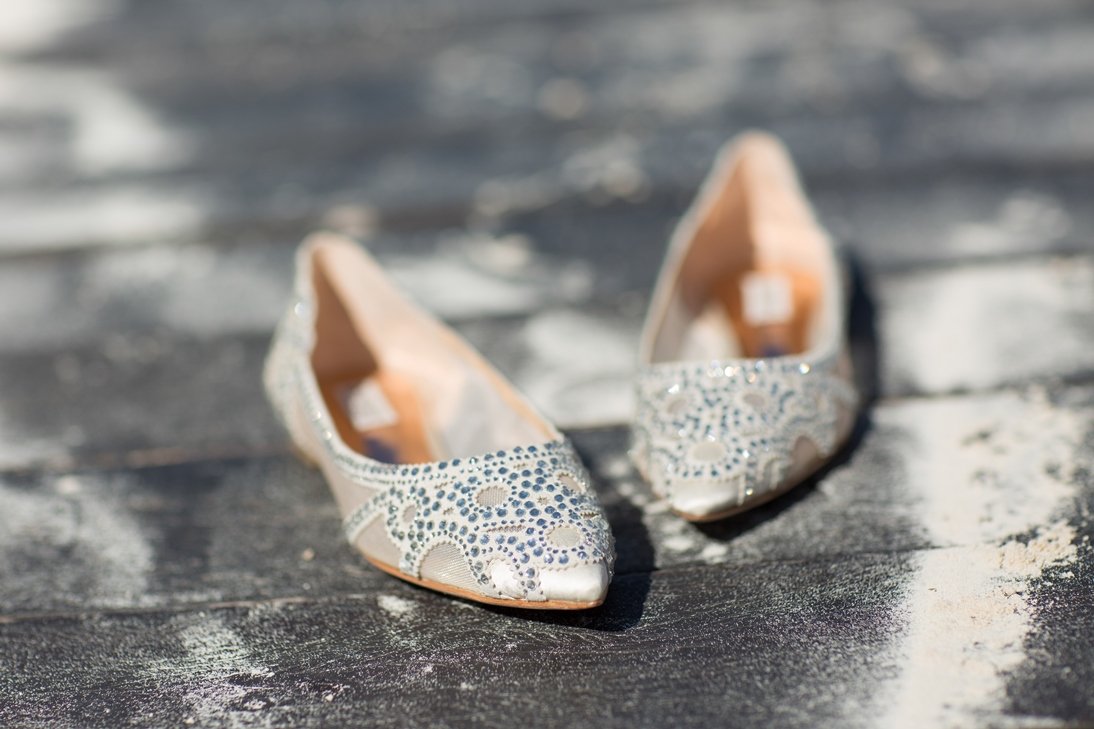 One thing I found difficult and highly uncomfortable was the overarching assumption that I was straight. I initially thought that referring to Emily as my “fiancée” and not my “girlfriend” would feel like a constant validation of the seriousness of our relationship and commitment. Instead it made me feel closeted. As a femme woman, making references to my girlfriend had always been my way of coming out over and over again everyday. When I met someone new at work I would causally slip into conversation that I was “having dinner with my girlfriend tonight” or “my girlfriend and I love that movie!” Suddenly in social situations, and even more so when I was immersed in the bridal world, any references to my fiancée were met with questions such as “What does he do? Where is he from? What color is his suit?” All compliments on my engagement ring were followed by “How did he ask?” or “He did a great job!” 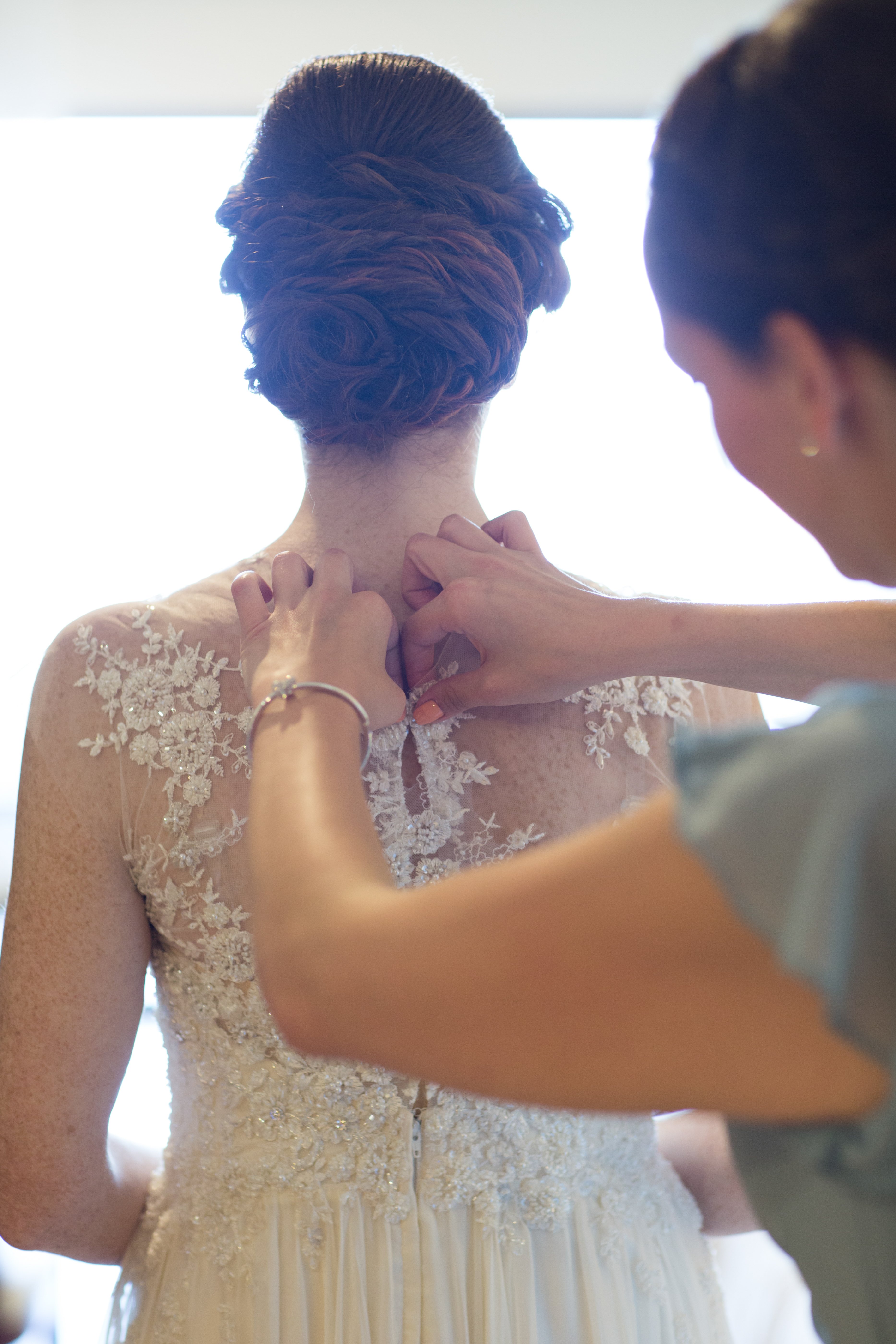 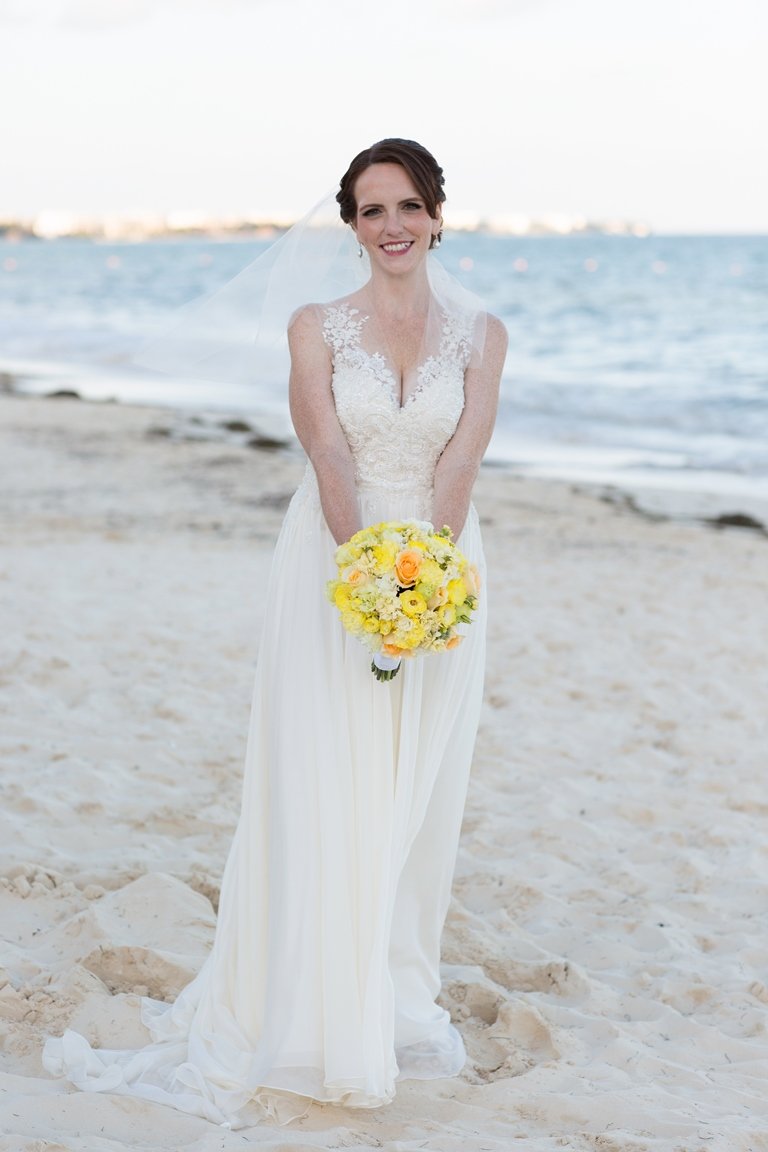 I’m so glad we did a “first look” before the ceremony, and that we took a moment to take some pictures at the end of the night after I had changed and everyone had headed into the nightclub for the after party. Those were the two moments were I felt like Emily and I really got to see each other, and I got to absorb how phenomenal she looked and I could see how much love she had in her eyes for me.

I feel incredibly blessed to be able look back at our wedding, and say “I wouldn’t change a thing. It was truly the most magical experience of my life. As someone who rarely finds herself “in the moment” and not thinking ahead to the next thing on my agenda, for that day, time seemed to go in slow motion and I was able to take it all in”

About the couple: Emily is the founder of Hot Rabbit, an events company that produces some of the largest LGBTQ nightlife events in New York City (and soon Los Angeles!)  @hotrabbitnyc @hotrabbitla

Nina is a nurse practitioner at Memorial Sloan Kettering Cancer Center, a nursing professor at Wagner College, and recently received her Doctorate of Nursing Practice in Disaster Management.

All photos by Jennifer Liseo