As the #MeToo movement gained momentum, so did the opposition against it. Those invested in either consciously or subconsciously upholding structures that allow for oppression, harassment, abuse, and rape culture to thrive are doing mental gymnastics to minimize the reality that our society condones physical and psychological violence against large groups of people. The opposition’s tactics have included, but are certainly not limited to, accusing victims of lying, victim blaming, victim shaming, “no one is perfect” justifications, and #NotAll defending. The #NotAll tactic has been used to delegitimize other activist movements, such as the #NotAllCops response used against protesters seeking justice for civilians murdered by police. On its surface, #NotAllCops is a seemingly innocent campaign in support of good cops, but in reality is a method of downplaying epidemics of police brutality, the prison industrial complex, and police systematically targeting racial minorities to sustain racist and classist social hierarchies.

With respect to the #MeToo movement, the opposition has used #NotAllMen in similar ways as #NotAllCops. The following excerpt from “Don’t Call It ‘Toxic Masculinity.’ They’re Sociopathic Baby-Men,” by Heather Havrilesky, best sums up the #NotAllMen mentality:

“Saying ‘toxic masculinity’ implies that masculinity is the core problem here, and suggests that a tiny bit of masculinity might be poisonous. Using the word masculinity suggest that all men have a toxic core. I don’t buy that…Equating every man with the very worst, most repugnant, infantile robot-men alive is, pragmatically speaking, a very bad idea.”

Failing to examine how society normalizes violent behaviors acted out by one group against other groups is actually, pragmatically speaking, a worse idea. Proselytizing that masculinity equals “male” also contributes to toxic masculinity by reinforcing binary gender roles, which prevents all people from actualizing a broad spectrum of healthy gender expressions. The knee-jerk #NotAll defense is usually rooted in people’s denial and/or guilt that they live in a society where they are likely contributing to and perpetuating cultural norms that allow for others to be oppressed, abused, and brutalized.

Those who discount the role of toxic masculinity in violence (plaguing not only the U.S., but also scourging the globe) have a fundamental misconception of masculinity. Masculinity is a social construct – a set of behaviors coupled with guidelines about how those behaviors are allowed to be manifest – that varies across time and culture. Some of these behaviors include dominance; transphobia; homophobia; cut-throat competition; bullying; sexual prowess while shaming sexual agency for feminine presenting people; physical aggression; and a restricted range of emotions that only allows the expression of anger but does not allow crying; same sex touching for comfort; mourning; fear; or any of the full range of emotions (with the exception of anger) that women are taught they can express. With respect to guidelines about how masculinity is allowed to manifest, society teaches us that there are only two genders and that women must be feminine and men must be masculine. We are told that “boys will be boys” when boys and men behave in ways that are toxic. Further, one of the greatest threats to the patriarchy, and the greatest slights to masculinity, is when someone who is expected to be masculine exhibits feminine behavior, because femininity is (wrongly) viewed as weak and inferior. 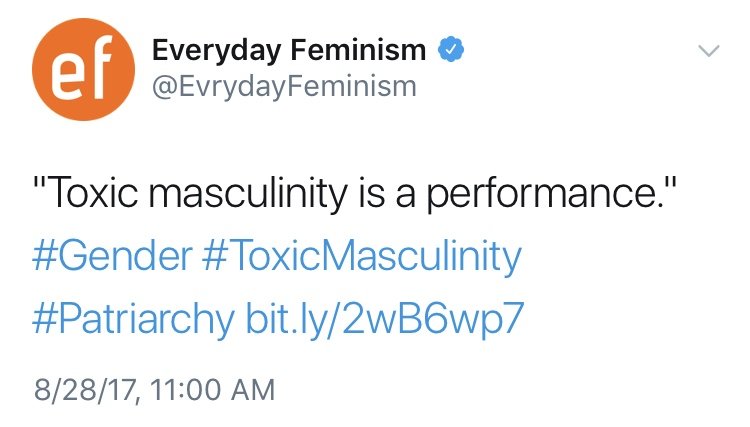 Contrary to what heteronormative society tries to instill in us, masculinity (a construct) does not belong to any gender. This is evident in LGBTQAI+ communities, where masculinity is performed by a wide range of gender identities, from masculine transwomen, to masculine transmen, to cis butch women, to gender fluid individuals who can embody both feminine and masculine attributes at the same time or apart from one another over a course of time. The queer community is less invested in the idea that masculinity equals man and femininity equals woman. (I say less invested, but not entirely de-invested.) The LGBTQAI+ communities have been at the forefront of dismantling harmful, rigid binaries that prevent all people from detoxifying gender roles and being free to express themselves in ways that affirm their identity however they see fit along the feminine-masculine spectrum. Many in the queer community are acutely aware that masculinity as a construct also includes toxic behaviors that are meant to stand in stark contrast to femininity because the patriarchy devalues femininity. Why does the patriarchy devalue femininity? Because under the binary gender structure, men are masculine, women are feminine, the two shall not mix, and women are second class. 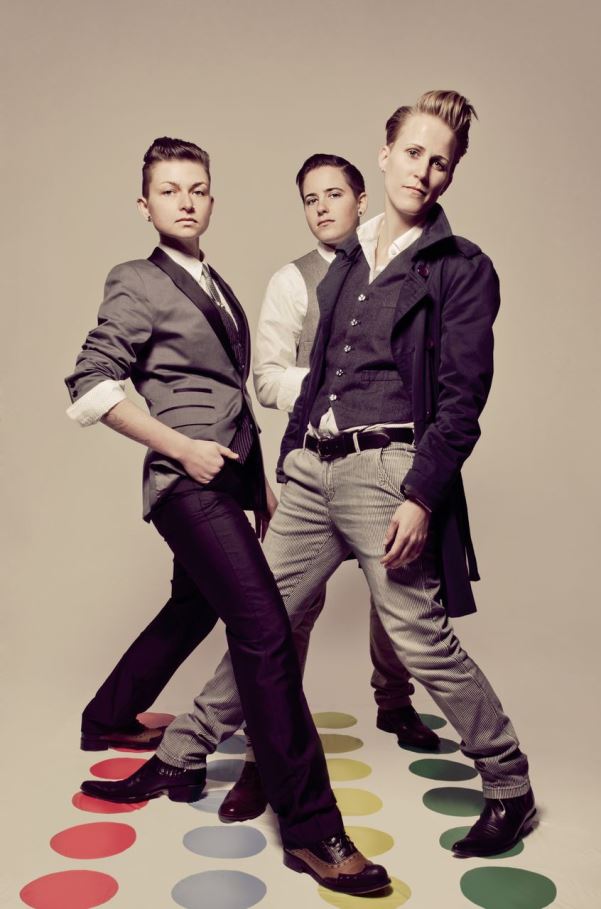 However, queer communities are not immune to replicating toxic masculinity. Society defines what is masculine and for many in the LGBTQAI+ communities, the larger society’s definition of masculinity is the only point of reference to mirror. Additionally, in a society that devalues femininity, masculinity is prized even in LGBTQAI+ communities. Jamal Lewis’ documentary No Fats, No Femmes explores the obsession with thin, masculine bodies in gay online dating communities.  In the HuffPost article “It’s Time for Drag Kings to Detoxify Masculinity on TV,” author and drag king Goldie Peacock documents the experience of fellow performers who struggled with finding communities that weren’t replicating toxic masculinity, including Brooklyn-based king K. James who noted that said toxic masculinity was manifest “by conforming to certain masculine ideals that are in conflict with feminism and respecting women and femmes.”

Toxic masculinity has even played out between dapperQ readers on our social media. For almost a decade, I, a queer Black femme, have been running dapperQ, providing a space both online and in fashion shows where people outside the binary can be visible and leverage style as visual activism. After years of not seeing myself – my body – represented anywhere in fashion, I started Hi Femme!, a sibling project that celebrated the contributions that femme style has made, and continues to make, in fashion and art. After posting our first Hi Femme! style profile on social media, we started receiving criticism that femmes were taking space once reserved for masculine presenting people on the site. Some readers argued that femmes did not need their own fashion magazines and websites because we were already represented on heteronormative platforms, such as in traditional fashion glossies and runway shows. Their complaints ignored the fact that, as Chaka Bachman of The Defiant Femme stated, “We [femmes] do not feel part of an industry that reproduces oppression, that polices bodies in all its aspects, that is not queer nor subversive or critical, that appropriates and dismisses as it sees fit – or as the capitalist maximize-profit-equation dictates and that produces its goods in a way that pushes local and global inequality forward.” As the conversations on our social media devolved into wild theories about how femmes cannot experience homophobia (not only do we receive unwanted sexual advances and harassment, but in fact experience homophobia and transphobia when we come out or are outed), one of the most curious assertions was that people assigned female at birth (AFAB) could exhibit masculine behaviors, but could not possibly exhibit toxic masculinity, and therefore could not oppress and harass feminine presenting people. Yet, there we were, at that moment, with some masculine readers demanding that I, a femme, continue to volunteer my time to provide a space for them while remaining silent and participating in their erasure of femmes.

Masculinity is not inherently bad, but it can be redefined without toxic elements that are detrimental to society at large, including eliminating the notions that masculinity belongs to only one gender and is superior to femininity. How we define masculinity is not fixed. Even colors for “boys” and “girls” have changed over time. Articles in Ladies’ Home Journal and Time magazine, published in 1918 and 1927 respectively,  proclaimed that pink is for boys and blue is for girls. (You can read about the historical shift in perspective on the Smithsonian here.)