In the second of a series of virtual talks/panels curated with a purpose of continuing our commitment to connecting communities, we presented a live digital panel titled “Queer Media in the Time of COVID-19” Moderated by Alex Berg, Host of AM2DM at BuzzFeed News and featuring speakers Merryn Johns, Editor in Chief, Curve Magazine; Eboné Bell Founder and Editor-in-Chief, Tagg Magazine; and Brooke Sopelsa Editorial Director, NBC Out @ NBC News.

Topics included what queer journalists within both queer and mainstream media are doing to provide factual and intersectional coverage on the unique ways this health crisis is impacting our communities; how platforms are curating digital events to provide LGBTQIA+ safe spaces; how readers can pivot and bring Pride into their homes to make global connections digitally; what the community to do to support queer media at no cost; and more. 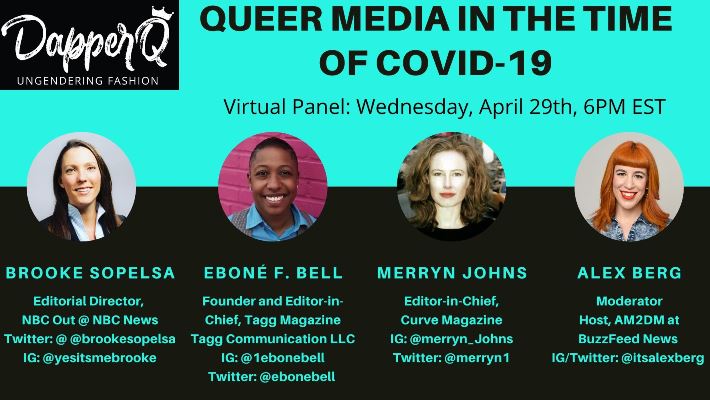 Brooke Sopelsa is the editorial director of NBC Out, the LGBTQ digital destination launched by NBC News in June 2016. Under Brooke’s leadership, NBCout.com seeks to both enlighten and entertain by showcasing enterprise reporting, original videos and other unique content about and of interest to the LGBTQ community.

In addition to assigning and editing LGBTQ breaking news stories, feature articles and video reports, Brooke has also spearheaded a number of franchises and special projects, including the annual #Pride30 list and the digital docu-series “Stonewall 50:The Revolution.” Since 2016, Brooke and NBC Out have been recognized with the Digital Diversity Network’s Impact Award, Out & Equal’s Champion Award, Gay Men’s Chorus of D.C.’s Harmony Award and two GLAAD Media Award nominations.Prior to her return to the NBC family, Brooke was a producer at the Huffington Post, where she developed and produced live news and lifestyle segments. During her time at HuffPost, she created content ranging from business news segments to celebrity interviews — and was awarded a 2015 RTDNA Kaleidoscope Award for her LGBTQ coverage.
Before joining HuffPost, Brooke spent six years at NBC — first as a writer/producer for CNBC.com and then as a producer for MSNBC.com, where she earned a GLAAD Media Award nomination for her multimedia report on the contemporary voguing scene.

In addition to digital media, Brooke has worked in both documentary film production and television news. She co-produced, shot and edited the documentary “Queer Streets,” a film about LGBTQ homeless youth, which aired on MTV’s LOGO channel from 2008-2011. Brooke started her career in journalism as a production assistant and shortly thereafter an on-air reporter at Time Warner Cable Channel 10 News in Bergen County, N.J.

Eboné F. Bell is the founder and Editor-in-Chief of Tagg Magazine and Tagg Communication LLC. After seeing a lack of queer women represented in local publications (around DMV), she decided to start a magazine and website to tell stories, provide resources and create events.

Merryn Johns is the editor-in-chief of Curve Magazine. She is also a digital news producer covering mainstream international news and a contributing writer for EDGEi, Edge Media Network’s investigative department. She is a frequent global public speaker on LGBTQIA rights with a particular emphasis on women and diversity and inclusion. When she is not working as a journalist she is pushing boundaries as a playwright and is a current board member of America’s oldest LGBT theater writers’ group, Village Playwrights.

Alex Berg (she/her) is a host and journalist who hosted AM2DM, a BuzzFeed News show that aired on Twitter, where she interviewed newsmakers and celebrities from Stacey Abrams to Joshua Jackson. She’s covered national news and stories about the lives of LGBTQ people and women for the past decade for an array of outlets. In her free time, Alex skates with Gotham Girls Roller Derby and lives with her wife and three cats.

Written By
dapperQ Team
More from dapperQ Team
Prom is political. It is a rite of passage that ushers youth...
Read More