Editor’s note: TravelQ is a series that documents the diverse experiences of queer and trans travelers as we negotiate dressing our most authentic selves with navigating complex travel obstacles unique to our communities. We have returned with a very special piece on the Albuquerque International Balloon Fiesta’s 50th anniversary.

Everyone has their favorite season. Mine is autumn. For some of you who follow my writing and social media regularly, this probably comes as a shock to you, considering how much I complain about the weather in New York.

Summer has won me over in my adult years, particularly having lived in Manhattan since 1999. That is because autumn is just not the same in the Big Apple as it is in my home state of New Mexico. Many people in New York think I like the summers in the city because I am not accustomed to seasons. They think I have never experienced anything but brutal heat and desert sands.

However, as the fifth largest land mass in the U.S., the sheer expanse of New Mexico’s 121,590-square-mile natural haven offers a variety of climates. On July 31, 2019, temperatures in New Mexico varied an astonishing 61 degrees, from 100 degrees in Tucumcari to 39 degrees at the Angel Fire Airport, according to the National Weather Service. According to the New York Times, “Taos Ski Valley has rightly earned its spot in the pantheon of North America’s most challenging ski areas.” So, I have seen it all. Rain, snow, hail, as well as sweltering heat.

And, New Mexico definitely has four distinguishable seasons in some regions. The key is distinguishable. Growing up in Albuquerque, there was a slow transition from summer to winter. Days became gradually shorter. Air became more chilly day by day. We layered in our comfy sweaters and blankets, because it was not only cooler in the day come fall, but what many people are shocked to find when they visit the desert is that it is substantially colder at night, with dips of 20-30 degrees lower than the daily high temperature. Our local food that is influenced heavily by chile is even more comforting. And, because our autumn is slow and easy, like our general approach to life, the décor for fall festivities actually matches what is happening around us in nature. Things have not yet necessarily completely wilted and turned dark gray when we are sitting around eating our pumpkin pie, sipping hot cocoa, and adorning our homes with Halloween, Día de Muertos, and harvest trimmings.

But, without question, one of the most unique and magical things about autumn in New Mexico is the International Balloon Fiesta, the largest hot air balloon event and one of the most photographed events in the world! As a child growing up in Albuquerque, for an entire week in October, I woke up to the most spectacular skies, curiously cosmic like our night skies, but speckled with hundreds colorful hot air balloons instead of stars.

Even though have I visited home every year since I left for NYC, I have not been home during October since 1999. I was interested to attend the fiesta again, through a set of eyes that had experience and was firm in my identity as a queer Black femme. So, I applied for a media pass to cover the event on dapperQ and was honored that my application was approved.

At 46 years old, I felt that attending the 50th year anniversary of the Albuquerque International Balloon Fiesta as a member of the press was a milestone for me. The event, established just four years before I was born, was something my family and I attended each year in my grandparents’ RV, with us kids running around in the dust and tumbleweeds in the vast desert before there were official parking grounds and glamping tents.

Walking up to Balloon Fiesta Park and seeing the balloons fill up the sky filled me with such joy. Even with the occasional influencer taking photos in a gown, the fiesta is still home-grown, still Burque at its core. 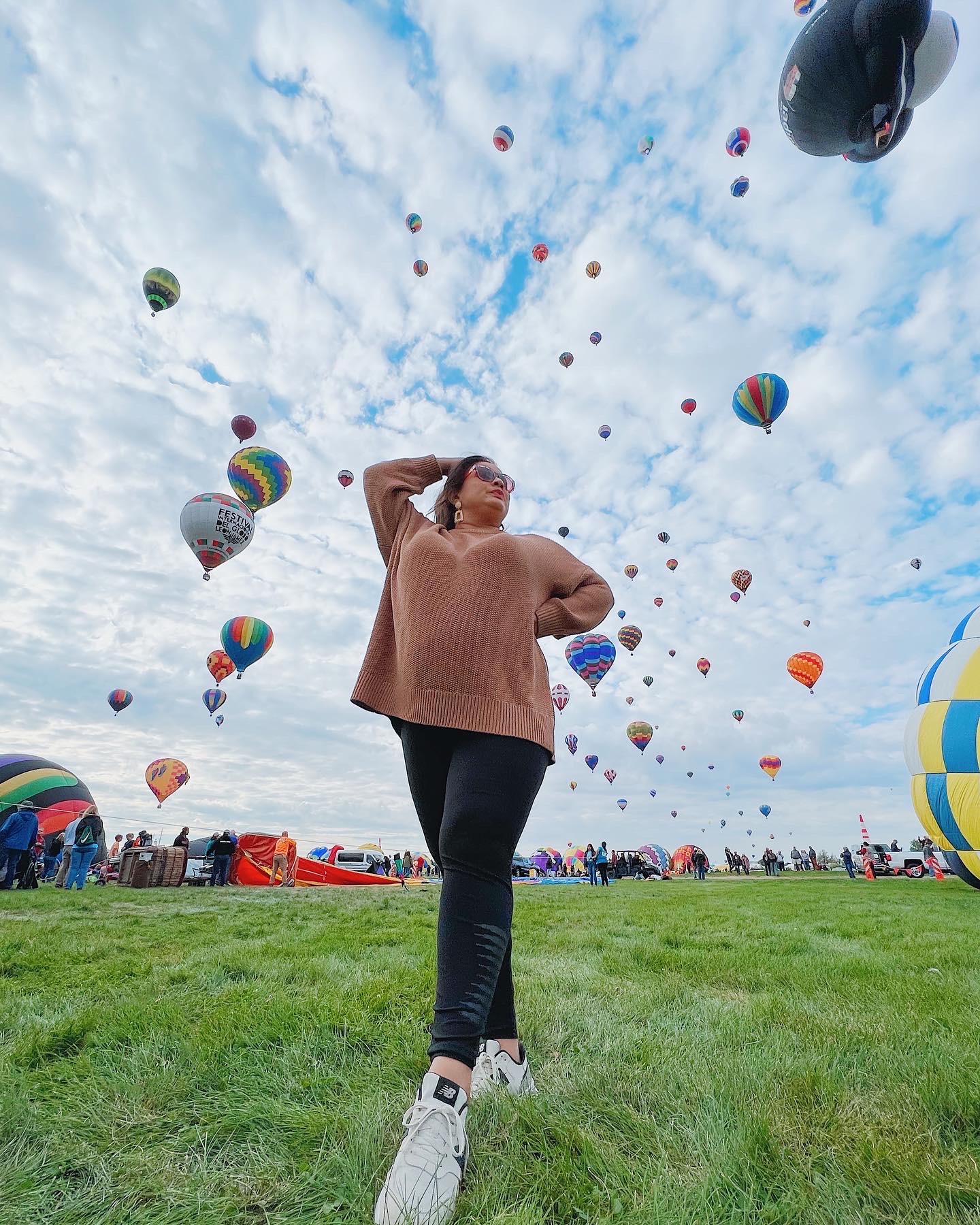 The event welcomes all. The attire is come-as-you-are (literally, GenX Nirvana meets GenZ casual). A magical world where anyone with a general admission ticket can walk amongst the balloons filling up and watch them rise, no VIP, dress code, no fuss, no velvet rope vibes. It’s both for kids, and the kid inside each of us.