Owning It! spotlights everyday dapperQs who rock their own style. The series creator — Candice Comisi —  believes that it  requires a holistic, 360 view to find what makes someone truly attractive. Through in-depth conversation and photographs, she interviews a different dapperQ each installment, sharing their inner and outer beauty with the rest of us.

My personality and my talent always outshines what people think of me just by looking at me. Working in a creative industry here in New York, I think my style has worked in my favor.

Mohawk Kellye is a 24-year-old self-identified lesbian stud from Nashville, TN.  She’s a web developer, loves to play rugby, and breakdance. Mohawk says she has found comfort in living in a big city where she can express herself and her sense of style.

Candice: How did you come into your current style?
Mohawk: Oddly enough, I don’t really think there was ever a pattern. I always had sort of mixed taste and I was always drawn toward masculine things. When I was younger, I had no control over what I could wear, but I found ways to make it work by choosing women’s clothes that were just a little bigger or baggier than they were designed to fit. I liked raver clothes. By the time I was 17, I was working, driving, and I’d go out and try on and buy things that would fit me the way I wanted. I still have and wear some of those clothes. I might have bought from mismatched stores, but that’s my style, a hodgepodge of things that look good to me. 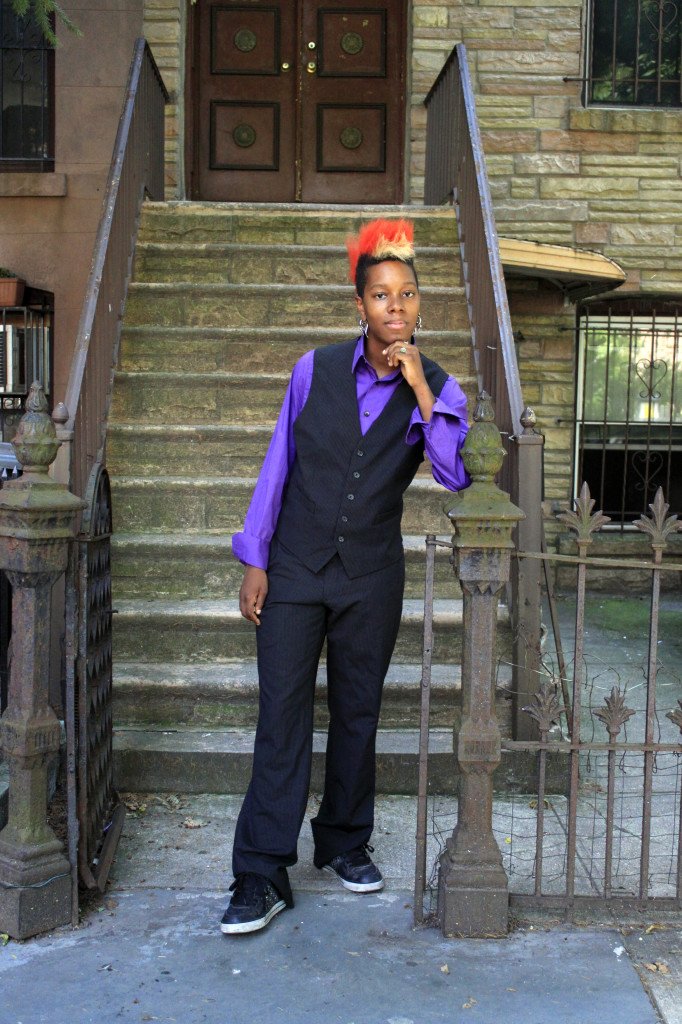 Candice: Do you have any brand loyalty?
Mohawk: I like Express Men, because I don’t like wearing overly baggy clothes, and I like it to look clean sometimes. I like Yellow Rat Bastard since they have a hodgepodge of skatery styles.

Everything else is really kind of random. I’ll go anywhere. If I look in the window of a store and the styles look about right, I’ll just go in there. I don’t even know the name of the store half of the time. I don’t care about brands or names. If it looks like good to me I’ll put it on.

Candice: You have such an eclectic sense of style! It’s really refreshing to see that. Do you like to accessorize?
Mohawk: My watch is my main thing that I never take off, but the battery died. I like plain silver rings. I used to have more rings, but a lot of them have gotten damaged or broken. You know, at this point, I wear whatever is left because I break things and lose things all the time! I like to switch up my earrings as much as possible.

I used to have shoes from every freaking color of the rainbow. Now, I just buy a set of all-purpose skater shoes, like DC brand.  I also like to have neutral color caps to match most of the things I wear. 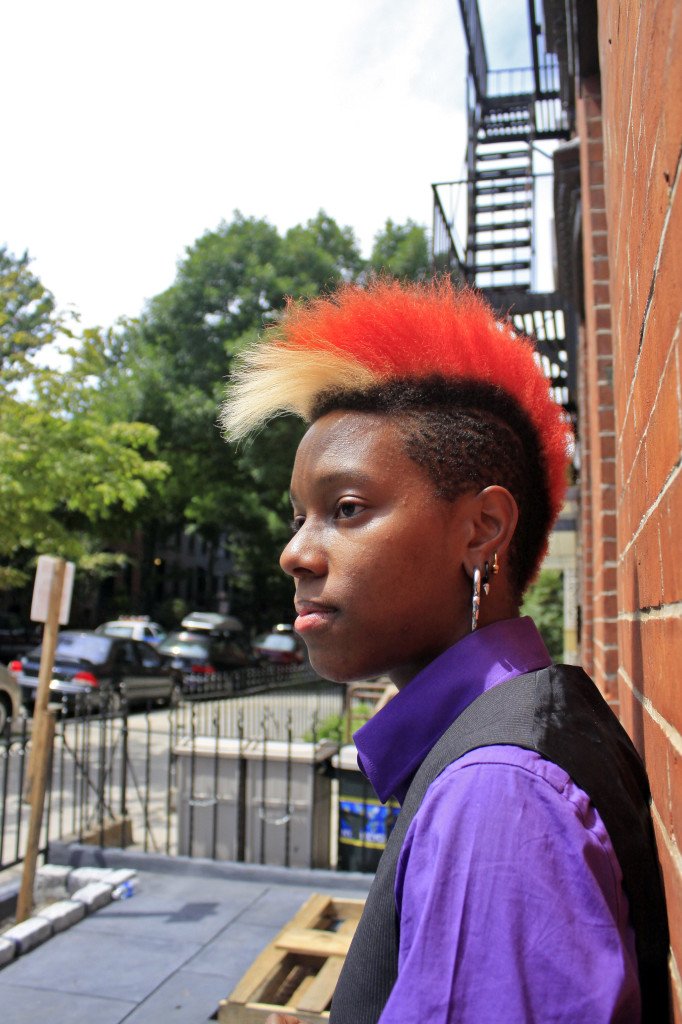 Candice: Alright, now let’s get to the hawk. How do you maintain it?
Mohawk: A pet peeve of mine is people with sloppy mohawks. When mine is a mess, it drives me crazy. Some people like the afro puff thing, but for me, I’m like, “Oh, no, you need to wash that!” I like my hawk to be nice and straight and upright. I go to First Impressions Salon in Brooklyn. They’re probably the best stylists I’ve had in New York because a lot of people don’t know how to do my hair. Come on, just put in a detangler!

Candice: How do people feel about your hair? Do you get positive feedback?
Mohawk: It’s been a lot easier since I moved up North. It’s a very take it or leave it kind of thing. I don’t really give a fuck, I don’t care. It’s super outrageous, and I’m not going to be shy about it. Some people find that attitude attractive, and others find that it’s off-putting.

With me being a minority who has an extreme appearance, other minorities see that as strange, or think that I’m trying to be white. I’m like, “Why is this me trying to be white? A mohawk is a Native American thing. And I mean, freaking Mr. T has a mohawk!” I just can’t think like that. Some people make it seem like it’s a bad thing to be different because I don’t have cornrows or whatever. I feel like it kind of motivated me to keep going instead of being ashamed of it.

Candice: It sounds like people make a lot of assumptions about you. How do you deal with that?
Mohawk: Based on looking at me, a lot of people would assume that I’m a complete badass, and I’m really not. I’m fun, I’m outgoing, and I like to do a lot of crazy things, but I’m really not a rebel of any sort. I don’t break laws or anything. I’m not rude, I’m not on meth, no flesh eating cocaine here.  I’m a hard worker and I like to be an approachable person. I’m really quite gentle and loving and generous.

You know, growing up in the South, my family feels like I need to conform to more traditional black styles so that I have less strikes against me, because I’m already black, and the lesbian thing, oh dear Lord! So for them, my style and my hair, it’s just adding to the problem. You know what, though? My personality and my talent always outshines what people think of me just by looking at me. Working in a creative industry here in New York, I think my style has worked in my favor. I see black people with Mohawks all the time here. At home in the South, even black people are like, “Where are you from?” And I’m like, “I grew up here, I’m not an outsider.” I say fuck ‘em. 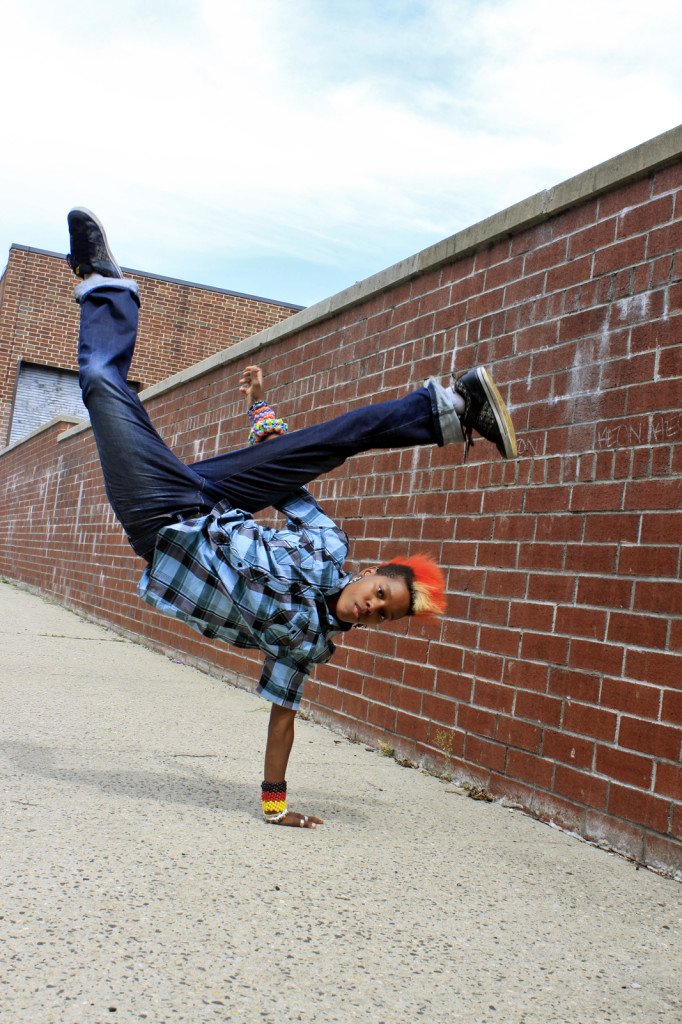 Speaking of people feeling like you should conform, you said that you identify yourself as a stud, but that you also have issues with conformity in general. What does being a stud mean to you?
Mohawk: I’ve looked at other magazines that appeal to studs, and to some effect they do talk about issues in the black masculine queer community, and maybe some Latino or one or two white people would be in there, but I’ve gone through the photos and I was like, “Everybody here looks kind of the same… is this supposed to be your scope of stud fashion?!” Where’s the representation? This is New York City!! There’s more than thugs or hipsters out there. So, dapperQ appealed to me because I saw a vast variety of people. It focuses on people who actually have unique styles.

I mean, everyone’s got different labels, and I don’t really fit perfectly into any of those. Compared to others who identify as studs, I’m not on the same level. I wear very different clothes. I might have a skater appearance one day, or another day I might look preppy. I don’t fall into the very typical look that black masculine lesbians tend to have. I like to call myself a raver. Like I said, I’ve got a mixture of clothes. My identity and appearance changes all the time. Whatever I feel like wearing that day is what I am that day.

Written By
dapperQ Team
More from dapperQ Team
Almost a year ago, we reported that Ellen DeGeneres was launching a...
Read More