This week, dapperQ reached another important milestone in achieving our mission to increase visibility for masculine-of-center lesbians, masculine presenting genderqueers, and transmasculine individuals: We were showcased on Newsweek’s Daily Beast T.V.  in a feature titled “Fashion’s Groundbreaking Gender Benders.”

“When Casey Legler made headlines in November as Ford’s first female male model, she became one of only a few gender bending women to make a mainstream impression. Yet, Legler joins a burgeoning movement of women, transgender men, and gender nonconforming people who adopt menswear as their own on the fashion blog dapperQ. Watch video of dapperQ’s He Said/We Said photo shoot, where transgressors interpret the Hermes men’s spring 2013 collection as their own.” – The Daily Beast 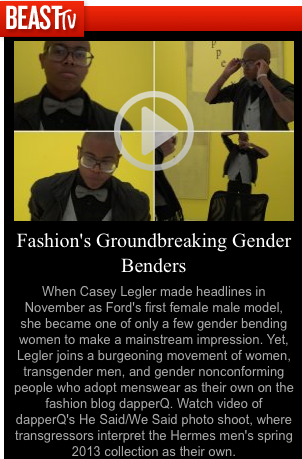 Stay tuned to dapperQ and Autostraddle in February to see the complete set of images from the spring 2013 He Said/We Said shoot.