Since 2011, the He Said/We Said fashion series that I produce for dapperQ has showcased the images of 11 photographers who have volunteered to create an amazing catalogue of sartorially smart masculine gender rebels, adding to the bank of images that are redefining menswear and increasing representation of our market in fashion media. Photographers have included Neville Elder, Sabrina Haley, Vito Fun, Yi-Ching Lin, Maro Hagopian, Yann Feron, Leslie Van Stelten, Bex Wade, Syd London, Katya Moorman and Sophie Spinelle. To date, the catalogue includes over 500 original images.

This week, I had the privilege of publishing some of these images on the Huffington Post. 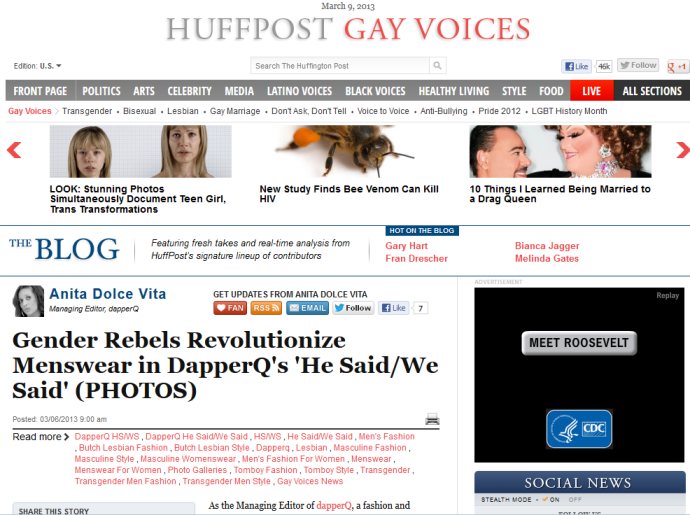 In the article, I mentioned that we still have a long ways to go with respect to the gender revolution in fashion. Huffington Post readers left the following comments, which further supports the need for the work that dapperQ is doing:

“I think the photos are well done. I have to question though, the claim of gender rebel? What exactly is particularly rebellious about women dressing in typically male clothing? True rebellion would have covered males dressing as women.” – JD

In response to JD:

Of course, there were folks who jumped in to take these two readers to college:

“There is a big difference between “a woman wearing pants” and a woman (or female bodied person) who doesn’t express their gender in a normative feminine way. You honestly believe that gender queer women/transmen don’t get harassed? That’s very naive.” 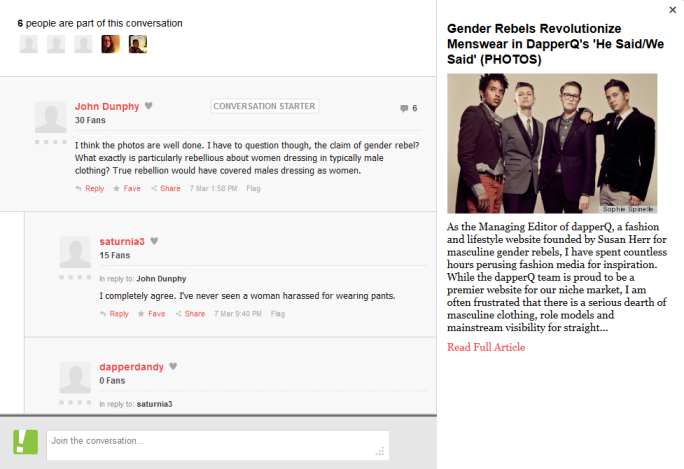 We invite you to take a look at the images and join in the discussion here.