Note: This is the third in a series that focuses upon how masculine presenting gender queers are bringing their dapper selves to the workplace.

Susan: Thanks for making time for this, Bo. Can you start off by telling me how long have you identified as a dapperQ and how would you describe your sense of style?

Bo: My sense of style is all over the place. I have days when I wake up and want to put on a shirt and tie, but I also have days where I feel most confident in a solid t-shirt and jeans. Regardless of the formality of my clothes on a particular day, I try to always look put together. Everything has to be cohesive or I’ll feel “off.” 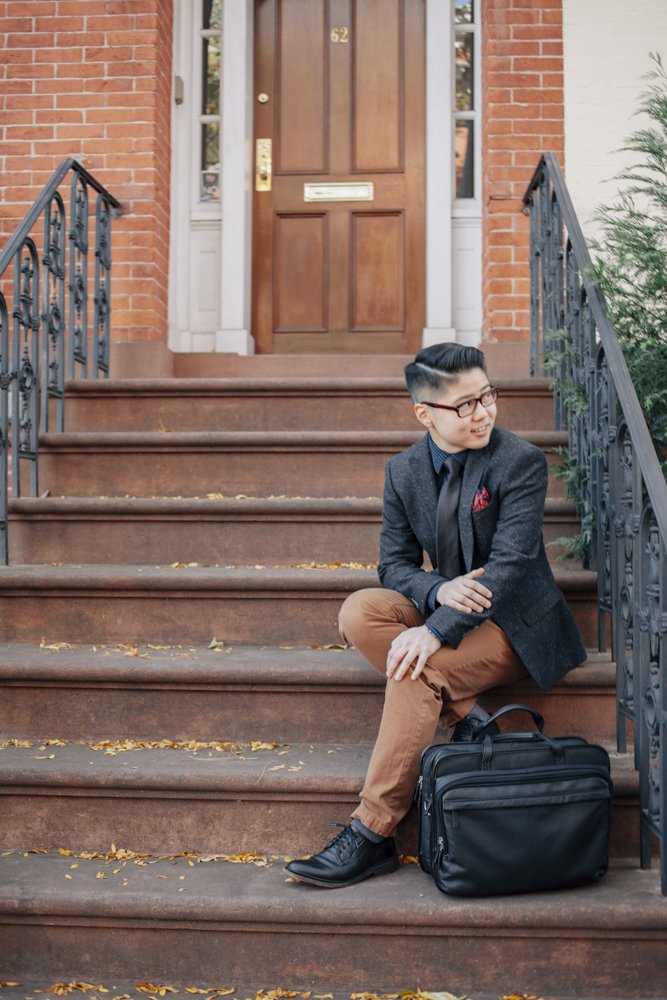 Susan: What can you tell me about your experience of being a corporateQ?

Bo: So, I’m no longer in the corporate world as of this past April, but I worked as an analyst at a government-contracting firm in the DC area for about three years. I wore button-ups and ties most days, sometimes with sweaters or blazers. I know that a lot of people complain about having to wear ties to work, but I actually loved it. I often got compliments from coworkers and even business partners regarding my attire.

Susan: What kind of compliments? Did they like the edgy choices? The traditional choices? Any comments on your technique?

Bo: I often received compliments on my necktie choices. I have a feeling that I got more comments because I was a woman wearing ties and bow ties, since that was nontraditional. My bow tie tying skills were quite on point though, I must say. So, I received praise on that from time to time. 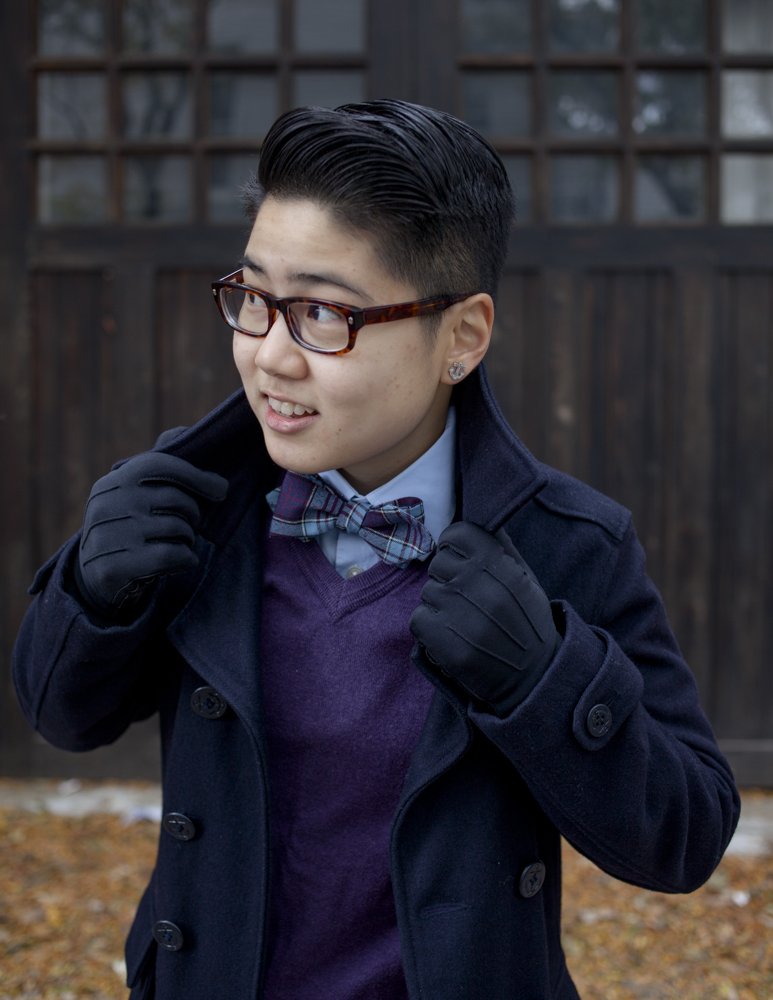 Susan: So you were fully embraced for your dapper style and this is one more reason why those on the fence about being corporateQ should take the plunge, right?

Bo: I was completely happy with the idea of being corporateQ in the DC metro area. I felt as though my dapper style was fully accepted. But, about one year ago, I cut my below-shoulder length hair much shorter. Six months after that, things took an unexpected turn. My bosses (the company owners) decided to have a conversation with me regarding my “look.”

Bo: Yeah. This was something I never saw coming. I had just sat through a performance review in which I got a raise. But, as I got up to leave, my employers told me to sit back down. The door was closed again, and so began the talk about why the way I looked was “a problem” and how it was confusing a lot of people. I was completely blindsided.

Since my bosses were also the owners of the entire company, I could have had a lot to lose if I acted negatively in the heat of the moment. In that half-hour, I sat there and took every offensive thing they said to me.

At one point, my female boss flat out said, “This isn’t what you advertised in your interview,” and told me that interview outcome may have been different if I came into it looking the way I currently did, three years ago.

My other boss, her husband, asked me four times “What statement are you trying to make?” and told me that he didn’t understand why I looked the way I did. He tried to make some analogy about how cops and soldiers wore uniforms to convey certain things. In his mind, I was doing the same, but he didn’t know what I was trying to convey. I wanted to laugh because the analogy didn’t make any sense, but he was serious.

In this mostly one-sided conversation, my bosses also expressed their hesitancy about placing me on a government project because they weren’t sure if I could garner respect from project staff or clients, and if would make them uncomfortable

Some quotes that will forever be engrained in my head:

“I know gay and lesbian people, but I don’t know what you are. What are you?”

“What does your mom think of your appearance?”

“Do you have any issues when you go into bathrooms?”

It was a loaded meeting where I felt cornered, to say the least.

Susan: Wow. That’s all so offensive on so many levels.  It’s so easy for those of us who live in big cities to believe that world is different, that we are much more safe. But, this sounds like nothing short of an assault.

Bo: Definitely. I was highly upset. But at the same time, I couldn’t figure out how to respond. When I made attempts to stand up for myself by stating that this had nothing to do with the dress code or my performance, I got criticized for my attitude problem. At one point, I had to step out of the room for a few minutes because I couldn’t control the tears streaming down my face. The attacks continued once I sat back down.

The message was loud and clear to me – I wasn’t feminine enough. None of this made any sense to me, especially because my bosses had known me for years and I had had short hair for six months at this point. Why were they just bringing it up now?

Susan: So, then what happened?

Bo: That meeting was left very open-ended. Aside from one boss wishing I could be more neutral and the other wanting me to meet her halfway (what do either of those mean, anyway?), there were no real solutions for moving forward. It’s as if they wanted to bring up their discomfort and have me deal with the consequences. I ended up e-mailing my bosses after a period of contemplation and distress to clarify what they said to me. It sounded like they wanted me to dress more feminine, so I asked if that was the case. This is when things got even more infuriating…

I had a feeling they recognized the severity of our meeting and that the company’s anti-discriminatory policy was clearly violated, because the response I got back was definitely written by someone else. (After working for someone for years, you become incredibly familiar with his or her writing style.) They must have spoken to a lawyer or someone in that position, because they did a complete 180 on their position and told me that the meeting was supposed to be a “casual conversation” to clear up how I would like to be addressed. They told me they brought things up because they cared about me, and that I got unreasonably upset.

Susan: Jesus. I’m no lawyer but this sounds both infuriating and wildly illegal. In the coming weeks, I will be speaking to two lawyers who represent clients experiencing workplace discrimination based on gender presentation and I’m eager to hear what their response to what happened.

Bo: Me too! I had several follow-up meetings with my bosses, both individually and together, and they had the nerve to tell me that I misheard everything because I was so upset. They said that they just wanted to clear things up and didn’t understand why I got defensive. I was told that I experienced that meeting through a “colored lens” because I had been so upset, and that I misinterpreted everything that was said.

So after being accused of misconstruing everything, it was clear that my bosses were going to stick to their lies. I quit ten days after that initial life-changing meeting. The decision to resign was one of the most taxing decisions I had to make, especially because I didn’t have a backup plan in place. But, I knew I had to take a stand. In my mind, I wasn’t just sticking up for myself when I put in my resignation letter. I was also taking a stand for everyone else who has faced, is facing, or will face similar scenarios to what I experienced. It’s not okay to discriminate someone based solely on his/her gender identity and presentation. I may be androgynous, but I can be the hardest worker you’ll ever meet.

Susan: Leaving that toxic environment sounds like the best thing you could have ever done. So, what is your take-away from this experience? Does it affect how you will dress for work in the future?

Unfortunately, this experience has left me a bit shaken up and I am haunted by the vivid memories from time to time. I admired and looked up to my bosses prior to this, and I would have continued to give them 110% at the job if that event hadn’t occurred. But it’s not all negative…

The message I have taken away from these events is that everything happens for a reason. As cliché as that sounds, things sometimes work themselves out. I applied to fashion school after resigning and am now happily pursuing a degree in Fashion Marketing at Parsons. If you were to ask me a year ago if I would quit my job with nothing lined up, I would have given you the “Are you serious? No way!” face. My decision to defend my identity and leave the company has led me to where I am today. I’m finally chasing my fashion career dreams in a city I’ve always imagined living!

This past event, although traumatizing, does not affect how I will dress for work in the future. My outward appearance in no way affects my productivity or highly-motivated nature, and I can only hope that this is obvious to future employers.

Susan:. The business world loves to talk about the value of diversity but for many “leaders” that means: do it on our terms.

This is a harrowing tale, clearly an example of the potential costs of transgressing gender in the workplace. I am so deeply sorry that you experienced all this, Bo, but also grateful you are sharing your story and persevering in your pioneering ways. Thank you.

If you are interested in being profiled, please write to [email protected] re: CorporateQ. Give us a few paragraphs describing your experience and include a photo or two if you can.  We are also interested in hearing stories of those of you whose location, industry or circumstances would never allow you to dress in a gender nonconforming manner and we can keep your experience anonymous.