Life of a queer fashion blogger often entails scouring the internet, hour after hour, searching for style that represents those who dress outside the binary. So, there I was on a Saturday morning, pursing Tumblr while I stayed inside avoiding the sub-degree temps and snow currently plaguing the East Coast, when BAM…this: 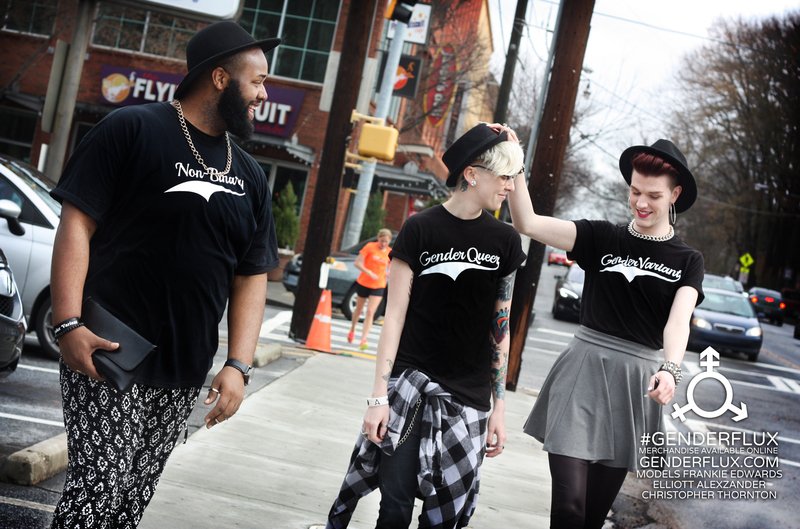 These awesome tees are by GenderFlux, a team of creatives who are not only selling t-shirts, but also raising awareness about gender identity and gender expression via their #GenderFlux campaign. Here’s more from their website:

The #GENDERFLUX campaign is to create awareness for the Gender Variant, Non-Binary & Gender Queer community.

For Pt.1 of the campaign we launched a single t-shirt designs featuring the gender variant symbol. We started with a pre-order period that lasted 10 days, and in those 10 days over 300 t-shirts were sold around the world. No advertising was in place and all promotions came by word of mouth & social media. All in all, a huge success.

On January 12th, 2015, we launched Pt.2 of the campaign with a total of 5 new designs available in black or white. Throughout the year we are planning to launch several more pieces to the Pt.2 collection, while also hosting parties & performances around the world to boost awareness of the brand and bring the gender queer communities together! Stay tuned for more!

dapperQ will certainly be keeping an eye out on this campaign and eagerly await new products. Until then, snag one of your very own GenderFlux t-shirts, follow them on Facebook and Twitter, and show us your GenderFlux by posting up on Instagram and/or Twitter using #GenderFlux.