This is an important year for LGBTQ+ rights. Not only are we celebrating the 50th anniversary of the Stonewall riots in New York City (and in the U.S.), but Sweden is celebrating 75 years since the decriminalization of homosexuality and 10 years of marriage equality in their country! In recognition of these milestones, StockholmLGBT  curated a very special “Stockholm for Lovers” media trip and dapperQ sent two of our collective members –  Alithea and Kim – to visit for the first time and experience some of the city’s best LGBTQ+ friendly attractions. Follow them along on their journey…

We’re Alithea and Kim, part of the #dapperQrew and two digital creatives based in NYC. We were lucky enough to have been invited on a trip to Stockholm by StockholmLGBT. As first-time visitors in Stockholm, we had no idea what StockholmLGBT had in store for us, but little did we know that their carefully curated fashion itinerary that was tailored specifically for the both of us would become one of the most memorable trips we’ve ever taken as a queer couple.

After landing in Stockholm, we arrived at Nobis Hotel and were welcomed warmly, shown to our rooms right away, and received adorable welcome gifts from Christina and Uwern (Founders of StockholmLGBT). We were pleasantly surprised by the thoughtful gifts, but also with the room’s interior and a park view that left us speechless. 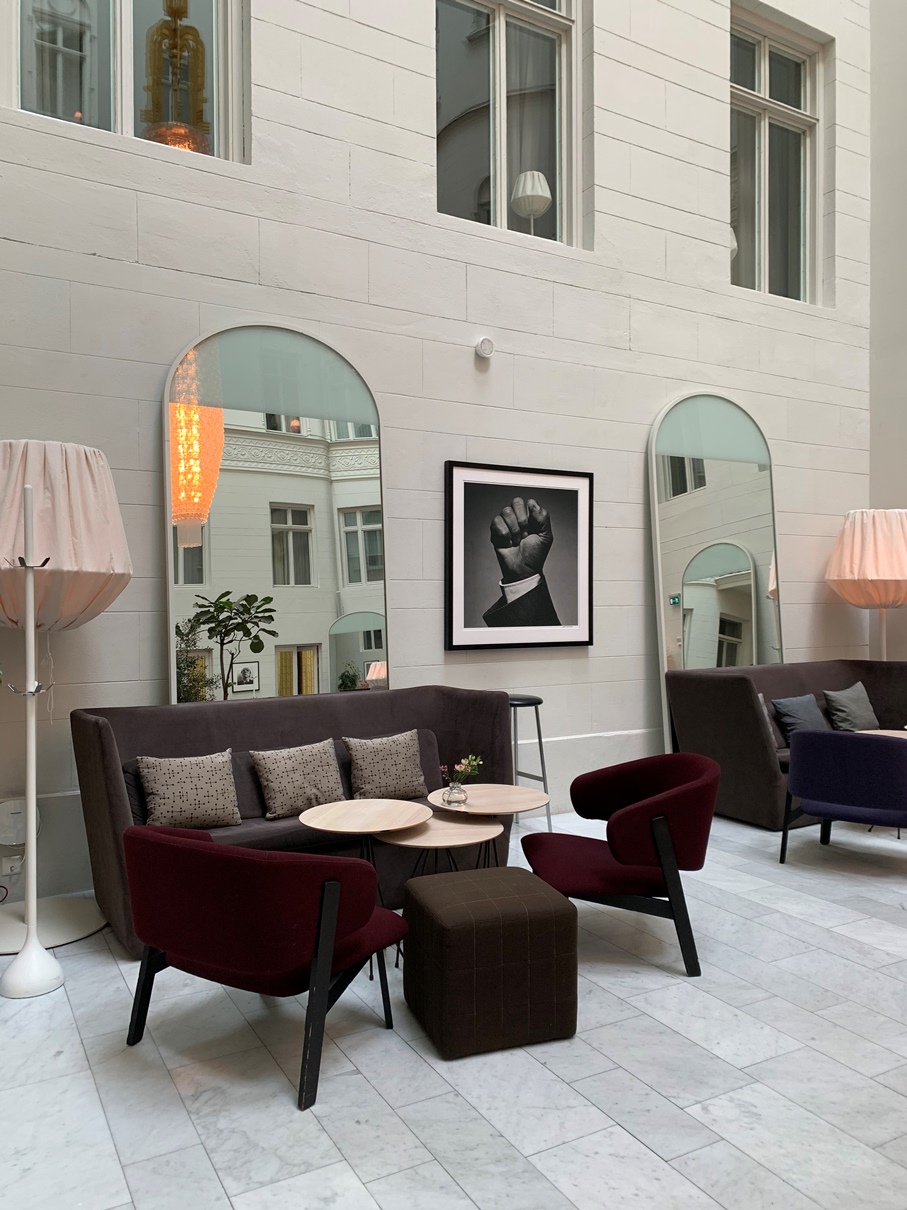 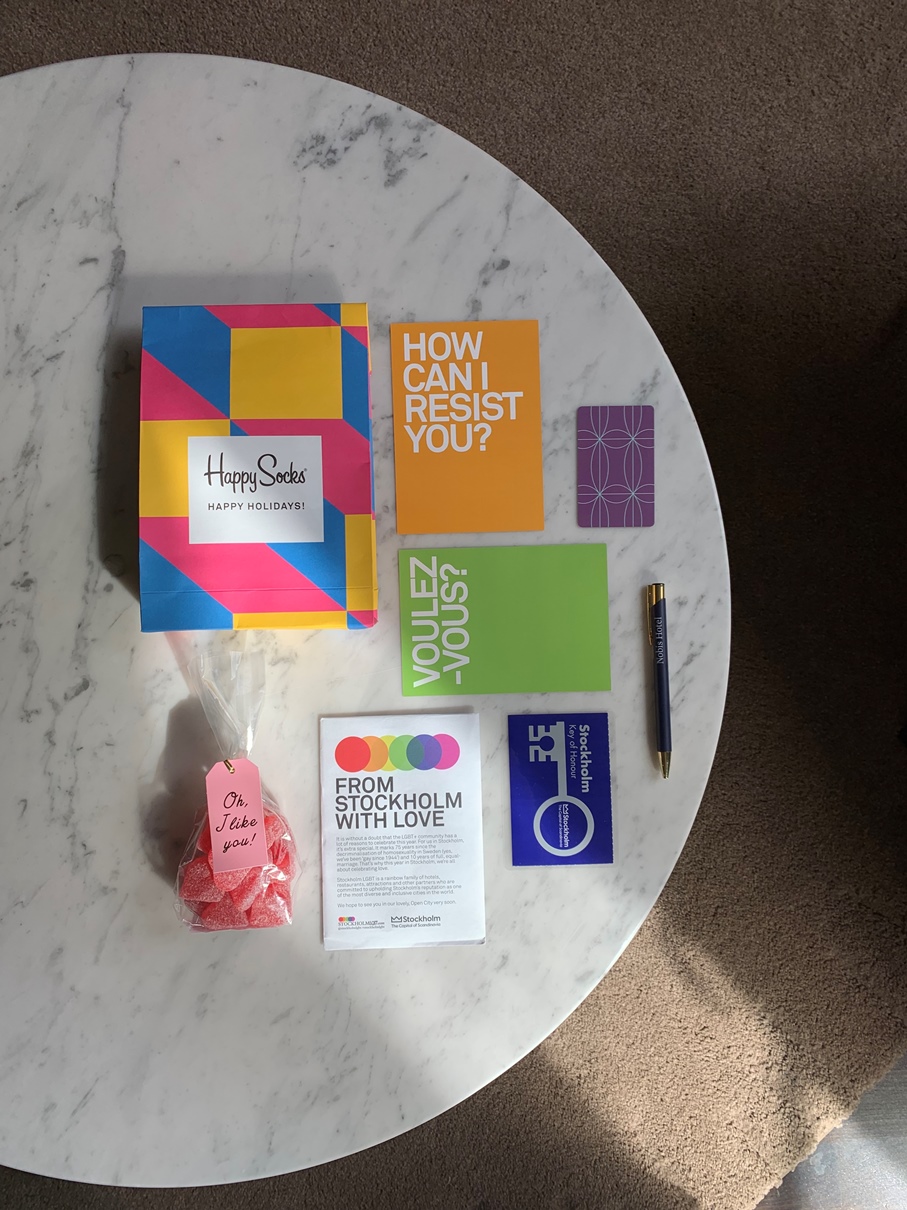 Our first day consisted of a little exploration around our neighborhood called Bibliotekstan, a first-time attempt of taking travel photos with a tripod, and a scrumptious dinner at NOI that left us in a delightful food coma for the rest of the night.

Stockholm’s metro stations that look like caves were the perfect setting for our first tripod travel photo together! We were a little bit nervous about how these would come out, but using this tripod has been a lifesaver. 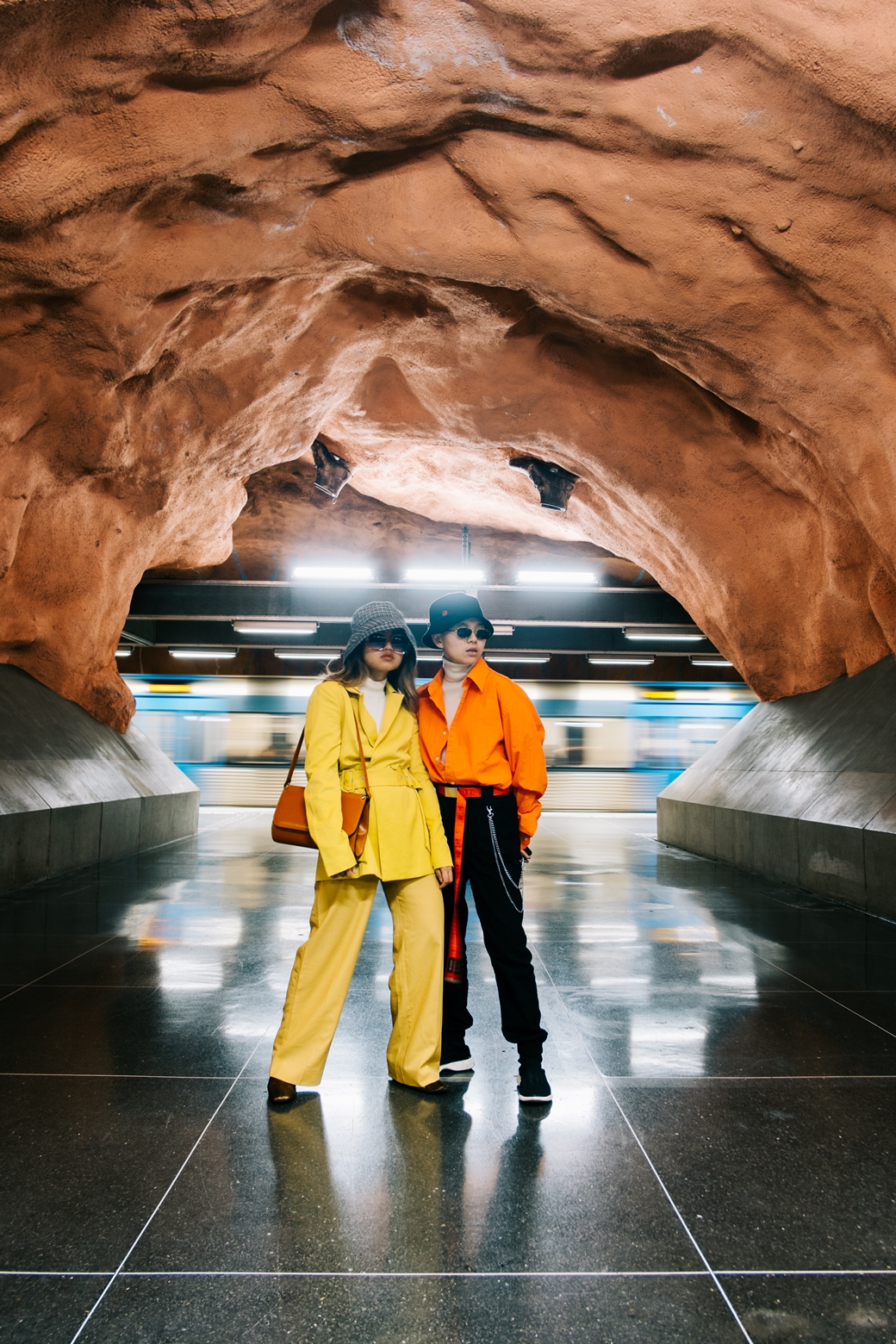 We had such a whirlwind first day with a flight from the U.S., arriving to the Stockholm airport, checking into our accommodations, and exploring our local host neighborhood that we decided to stay close to our hotel for dinner. NOI, located right in the Nobis Hotel, was the perfect distance from our rooms to allow for a lux dinner without the travel fuss. NOI serves modern European food with a Swedish flair. Designed by the pre-eminent Swedish architect firm Wingårdhs Architects, the restaurant has a hip low-lit subterranean aesthetic.

Our hotel room was so comfortable and impeccably designed that we had a hard time getting out of our cozy sheets. But, we knew there was a beautiful city awaiting, so after sleeping in a bit, we met everyone from StockholmLGBT and all the queer couples who were a part of the trip for lunch. We made our way down the docks in Skeppsbron and found ourselves in front of a 100 year old steamship, SS Riddarfjärden. We had a light packed lunch and were impressed with the staff at Blidösundsbolaget who took note of everyone’s food preferences (Thea is allergic to anything spicy) and made separate snacks for us. We were given an opportunity to look around the steamship and learn about its history and why it’s one of the most popular spots in the city, offering live music performances with amazing food and drinks, all while cruising the lake within the island’s labyrinth and enjoying the sunset.

After lunch, our group went on a tour of Gamla Stan (the Old Town) with guides @travellars from @standouttravel. We got to experience all of the beautiful winding streets of the city: the cafes; Chokladkoppen, the city’s first LGBTQ+ coffee shop; and the gorgeous interior of the Royal Palace.

What’s life in Sweden without Fika, often translated as “a coffee and cake break”? And, what is LGBTQ+ culture without our own coffee shops? While traveling the beautiful stone streets of Stockholm, we were thrilled to stop for some snacks at Chokladkoppen, Stockholm’s first LGBTQ+ coffee shop located in the heart of Gamla Stan. We highly recommend trying their decadent hot chocolate!

Fueled on cakes and hot chocolate, we made our way up to the The Royal Palace, His Majesty The King’s official residence, which has more than 600 rooms. The well-preserved interior provides historical insight from the 1700s and onwards. When visiting, do not miss the changing of the Royal Guard! Of course, as design enthusiasts, we were in awe of the interior. 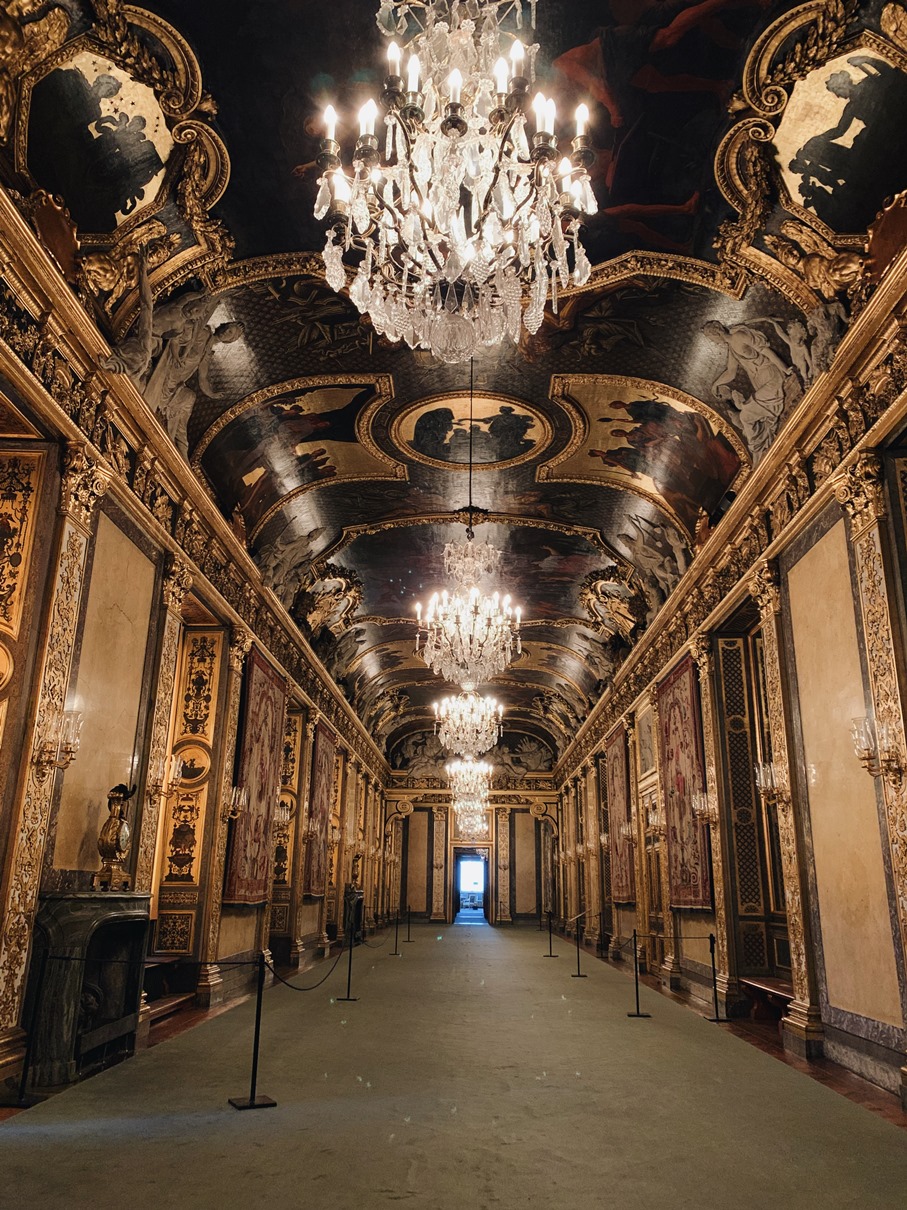 After the Royal Palace tour, it was time to relax our feet and take in some of Stockholm’s views at Mälarpaviljongen, a gay-owned restaurant and bar with a floating patoon! Not only is Mälarpaviljongen one of the most picturesque hangouts in the city, but their own brand of gay-Rose raises hundreds of thousands of dollars for LGBTQ+ causes across the world, and they largely recruit staff who are LGBTQ+ asylum seekers escaping persecution in their home nations.

We finished our second day with dinner at Södra Teatern with the rest of the amazing LGBTQ+ writers and content creators that  StockholmLGBT flew out for this trip. With stunning views, amazing parties, delicious comfort food, and extraordinary concerts, Södra Teatern celebrates love, equality, freedom, and community all year.

As we mentioned before, StockholmLGBT curated an itinerary specifically for us, which demonstrated their commitment to diverse LGBTQ-travelers. The list called for an exploration of all the epic sights in the city, while also catering to what we all love here at dapperQ — a look into Swedish lifestyle and fashion. 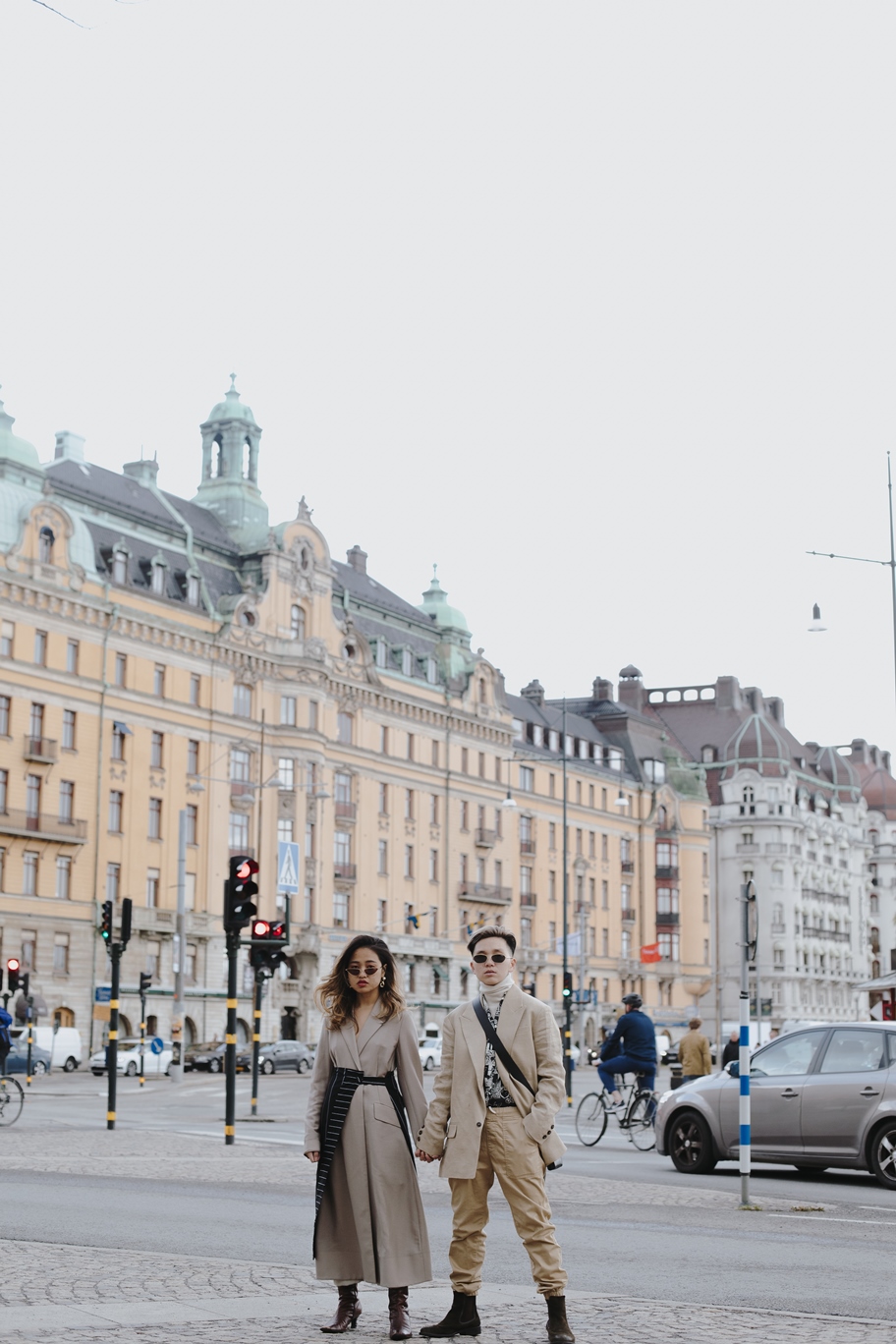 StockholmLGBT arranged interviews and tours with three fashion brands located in Bibliotekstan, Stockholm’s most affluent shopping district. Bibliotekstan is a pedestrian street lined with incredible boutiques, and eventually heads towards Humlegården and the Royal Library. So, of course we couldn’t resist checking out a few more shops in addition to those listed on our itinerary along the way.

But, before we ventured out for a long day of fashion tours, interviews, and shopping, we definitely needed to grab some food. We had brunch at Berns Asiatiska, the first Chinese restaurant from 1940’s Sweden that now boasts an incredible buffet with an impressive selection. And the decor?!? Gasp! The luxury put us in the right mood to shop in the high-end Bibliotekstan district.

Now for the first brand: We stopped by HOPE, where designer Patrik Guggenberger gave us a tour of the shop and spoke with us a bit about their vision. Founded in 2001 by Ann Ringstrand and Stefan Söderberg, HOPE’s collections feature clean, cool looks with clear nods to classic menswear and utility pieces. While the brand does have separate “menswear” and “womenswear” collections, their passion for tailoring and utility established the brand early-on as one that offered pieces that could be styled more fluidly across the gender-spectrum. HOPE is also very active in the LGBTQ+ communities. They believe in fashion with a purpose through financially supporting LGBTQ+ rights organizations and creating dialogue within our communities to learn and grow with us!

The second stop on our agenda was Byredo. Founded in Stockholm in 2006 by Ben Gorham, Byredo is a European luxury brand that creates and develops a range of products such as fragrance, home, leather goods and accessories. We fell in love with their unisex fragrances. The brand does not focus on gender when it comes to their scents, but rather on evoking individual “scent memories.”

The third brand on our itinerary was Rodebjer, which was established in 1999 by native Swede Carin Rodebjer. What we loved most about this brand is that the collections are all about women’s empowerment inspired by counterculture, the human rights and feminist movements, music, film, art and literature.

Being in Stockholm’s most infamous shopping districts, we couldn’t help but stop by three additional brands that were not listed on our travel itinerary. The first was Filippa K, a minimalist brand established in 1993 by Filippa Knutsson and Patrik Kihlborg at their kitchen table in Stockholm, Sweden.

The next brand we visited was J.Lindenberg, a Scandinavian fashion house founded in 1996. This was definitely one of Kim’s favorites, as the brand is known for bridging sport and fashion, fusing sharp silhouettes of high fashion with the functionality of activewear!

The last stop on our fashion tour was Acne Studios, one of Stockholm’s most popular brands. Acne Studios was founded in 1996 in Stockholm and has grown into a global fashion house with retail stores around the world including Paris, London, New York, Los Angeles, Antwerp and Tokyo. Acne is also famous for their collaborations ranging from bike and furniture designs with some of the top creatives in the industry. Of course, we loved Acne’s collaboration with transgender magazine Candy, where the two brands teamed up to create a series of three shirts aimed at causing “gender confusion” that were available in denim and silk. The capsule pieces are named after characters in 80s soap opera Dynasty, and called Alexis, Krystle and Sammy Jo. How very Pose.

We spent our last night indulging in a seafood and carb heavy dinner at Riche, which is known as “a legendary kitchen with an equally legendary bar, all filled with legendary guests and legendary staff, every day of the week.”

Stockholm was a wondrous city that welcomed us with such warmth as a QWOC couple! Stockholm now holds a special place in our hearts and you should definitely bookmark it for your next LGBTQ+ friendly Euro-trip!

Where to Shop:
Biblioteksgatan District
Brands:

What to See:
Vasa Museum
ABBA the Museum
Secret Garden

Written By
Guest Authors
More from Guest Authors
The comments are beginning to flow (blame sunshine for the glacial pace?)...
Read More