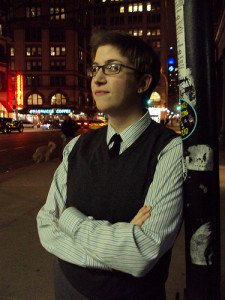 I met Erica Kagan at the Girlyman concert and asked her to step outside (for a photo!)  Here’s what this young attorney at Kurland, Bonica & Associates (home of notable dapperQ Yetta Kurland), had to say about her outfit that night and where she gained her sense of style:

The button-down shirt is from the Gap (similar ones might be this or this), the sweater vest is Banana Republic (similar one), the tie was given to me by my father who bought it for himself in Ireland many years ago and gave it to me as one of my first ties because he doesn’t wear skinny ties anymore but I surely do. (Aldo sells some great, inexpensive skinny ties, the belt is Kenneth Cole, the pants are women’s pants by Calvin Klein, but I bought them at Bloomingdale’s, and I think the shoes are Cole Haan something like these).

My style has developed from different sources over the years. Part of my inspiration is from my father, who is a shirt-and-tie professional guy and he gave me some of his old ties many years ago and taught me how to tie them. He and I have often talked about our professional styles…from the different types of tie knots, types of shirt cuffs and styles of a collar to the difference between oxfords and loafers. I also just observe the styles of many folks I see…whether it’s other attorneys in court or people on the subway or around town, if I think someone looks sharp, I take note of styles, colors and patterns they’re putting together and think about ways I can incorporate them into my wardrobe.

Erica is pictured outside Joe’s Pub on Astor Place in NYC.

Written By
Guest Authors
More from Guest Authors
Here’s the first (coming to you from gritty winterized Brooklyn) of what...
Read More