Owning It! is a new feature series which spotlights everyday dapperQs who rock their own style. I believe that examining ourselves through a holistic, 360 view is what makes us truly attractive, to ourselves and to others. Through in-depth conversation and photographs, I’ll interview a different dapperQ each episode, and share their inner and outer beauty with the rest of us.

“I changed my gender presentation sort of abruptly. I had thought about it for a long time and finally reached a point where I was like, ‘I will not dress like this anymore!’ It was really hard, because I just wasn’t comfortable wearing anything that I already had.”

Adrien and I met in a quaint restaurant in Boerum Hill, Brooklyn during Sunday brunch. A perceptive person who is both thoughtful and “slightly silly,” Adrien’s story is one of a gender nonconforming, masculine-of-center, first-generation person of color who prefers to be referred to as “Adrien” rather than by a particular pronoun. Adrien works at a racial justice policy organization and is on the steering committee of The Queer Commons, a New York-based organization dedicated to developing and supporting free educational events by and for LGBTQ folks.

Adrien likes to dress like a “dandy gay man. It’s what I aspire to in life. I feel like I am kind of bookish and a nerd, too, and that’s what [my look] represents, as well as being very obviously gay.”

Candice: Let’s start out with some basics- do you think you’ve always been a dapperQ?

Adrien: I think I’ve wanted to dress like a boy pretty much always. I feel like other people’s coming out stories are like, “I knew [I was gay since I was] in kindergarten,” but I didn’t have that experience at all, I came out pretty late. But I did always know that I wanted to dress differently, that I wanted to dress more boyishly, though it took a very long time before I felt I could present the way I wanted to. When I wanted to cut my hair short in high school, my family said, “If you cut your hair, you’d look a boy, so you’d have wear a lot of make-up to compensate.” They were very supportive of me in general and they weren’t saying it to be discouraging, it’s just not normative to look the way I do.

I went to a private high school and there was not an enormous amount of diversity there. Most of the kids dressed in this very wealthy way, and I was never going to look like that. I wound up being friends with the weird kids, the kids who didn’t participate. 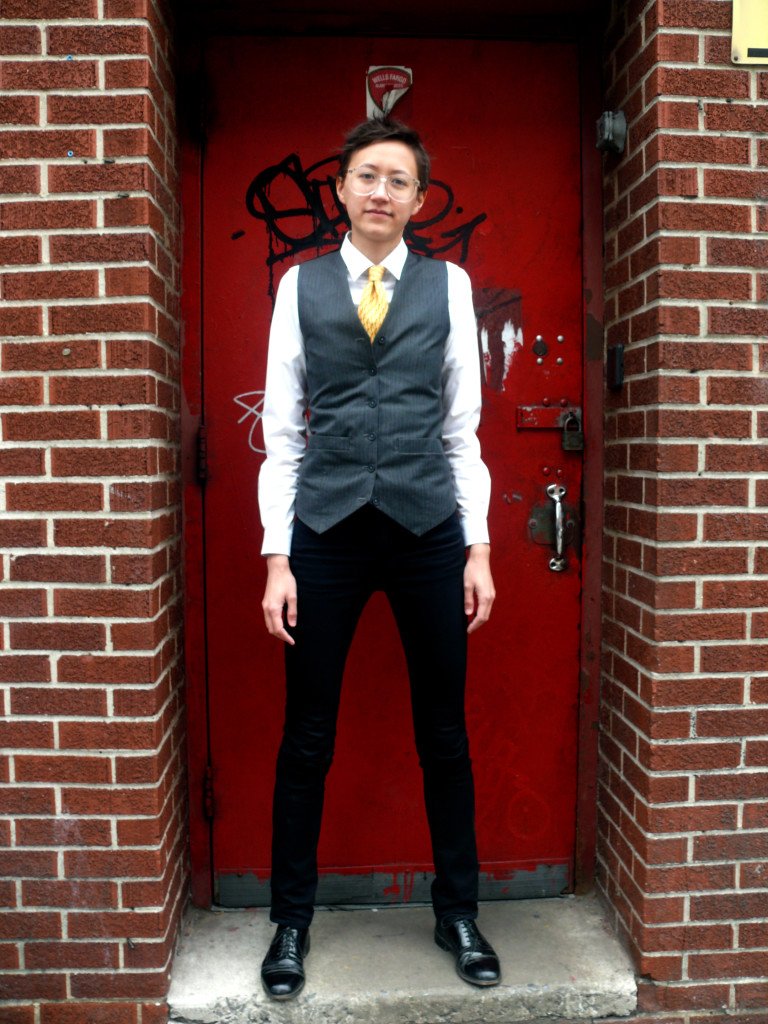 Candice: Are their certain brands you particularly like to wear?

Adrien: I actually don’t shop that much, but I like shirts from Uniqlo. They’re more streamlined than most women’s shirts, relatively affordable, and always look exactly the same. I like that I know how everything is going to fit when I walk in the store, so I don’t have to spend a lot of time there. I also like Club Monaco because they have men’s extra-small sweaters and really good sales.

Adrien: When I first changed my gender presentation and wasn’t making a lot money I went to Beacon’s Closet in Brooklyn a lot, and I actually still go there pretty often. I also like The Brooklyn Circus. The staff are always impeccably dapper, incredibly friendly and up for a game of ping pong, and they have men’s extra-small sizes that fit and look really sharp. Usually, they are  a splurge, but they have great sales, and I mean, how often do you get to shop at the same store as Mos Def and Talib Kweli?

Candice: Can you talk to me a little bit about what you’ve got on today?

Adrien: Sure! My shirt is from Uniqlo. It’s simple, plain and I got it from there because it’s affordable and easy to replace if I get it dirty.  This vest is part of a suit I had made while visiting the Philippines with my family. I’m so glad I got this, because it’s impossible to get a three-piece suit in my size in a regular store in the States.  My friends say that these are my hipster glasses, but I feel like they’re about me being willing to be seen as slightly weird. They’re not professional glasses, but I wear them to work anyway. My dad gave this to me as a present. It represents that slightly silly side of me. It looks really fancy and professional, but if you look more closely, you’re like, “Huh, are those cartoon giraffes? And are they… windsailing?” Yes, yes they are.  And these pants are from gilt.com. They have a lot of name brands that are normally too expensive, but this site has great sales.

Candice: I like that you’ve got so much style while also being able to operate on a lower budget. How about your hair, who cuts it for you?

Adrien: I started going to a barber in Park Slope, Brooklyn called George’s Barber Shop. It’s this classic barber shop, with the striped pole and the incredibly old barber and everything! There’s no such thing as an appointment at George’s, people just drop in. The haircut is only $7! And the barber Kostas is so nice. Another boyish queer I know told me about him.

I love going here because not only does Kostas give me the haircut I want, with no pushback or questions about the hairstyle being too masculine, but I went with my girlfriend (who is very obviously my girlfriend) and he was incredibly nice to both of us. It was a very positive experience, and I highly recommend this place to all the queers!

Candice: Do you wear any accessories or jewelry day-to-day?

Adrien: I wear a wishbone pendant under my clothes. It’s not really consistent with other things I wear. I kind of had a hard few years, but I guess I believe in luck to a certain extent. Some of my friends have said, “Maybe it’s actually unlucky, because you’ve had such a bad run, and it’s only good luck if you get the bigger part of the wishbone.” Well, I survived, and this [pendant] has both the good luck and the bad luck together. I think that’s important. That’s life. 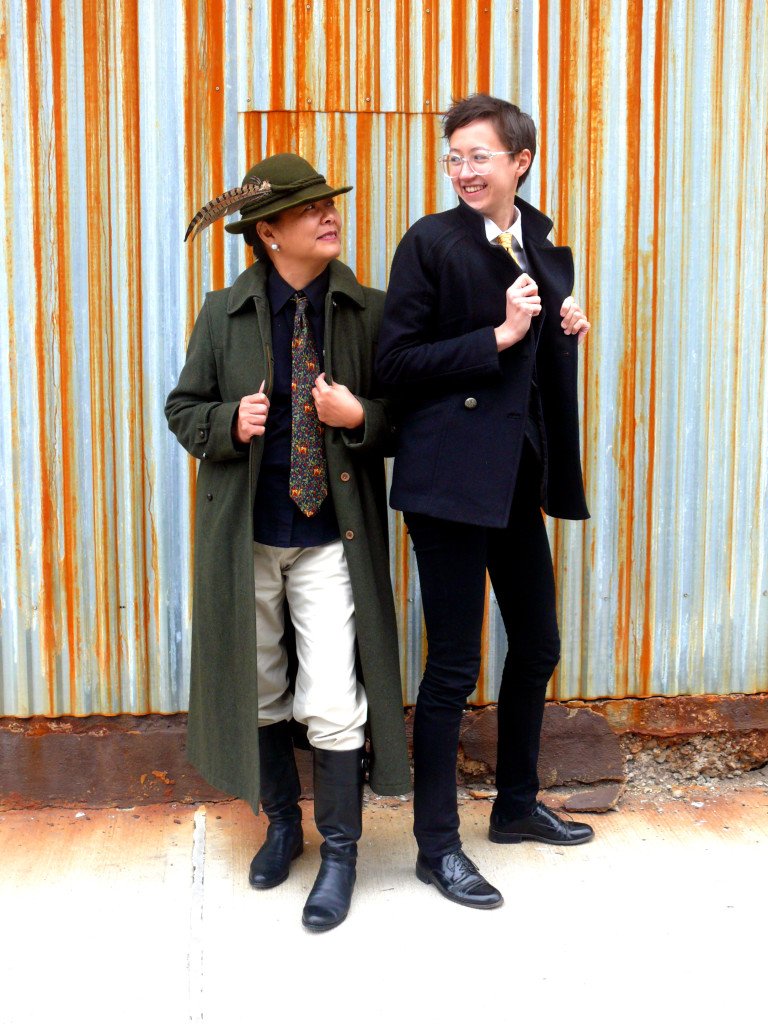 Candice: Something great about Owning It! is that you can bring someone with you, someone who means something special to you. Why is your mom here with you today?

Adrien: My mom is very dapper. Just like today, she often wears a button down shirt and a tie, and she totally doesn’t look masculine at all; it’s just part of her aesthetic, too.  My parents have all been very supportive of my coming out, changing my gender presentation and changing my name. Sadly, I think that’s quite rare, so I think it’s nice that she would be here with me today. She’s excited about it.

Candice: It’s so wonderful that you’ve got support from your family. I think this story is going to inspire many of our readers out there. What does dapperQ need to do in order to be supportive as well?

Adrien: It’s just so good to have this website as a resource. If you’re genderqueer or gender non-conforming, there aren’t really any resources at all. That’s one thing I particularly like about dapperQ. It’s not just any masculine-spectrum fashion, it’s also about being dapper!

I changed my gender presentation sort of abruptly. I had thought about it for a long time and finally I reached a point where I was like, “I will not dress like this anymore!” It was really hard, because I just wasn’t comfortable wearing anything that I already had. So, there was a period of time where I had thrown away all of my clothes, and I had just graduated college and was working at a nonprofit so I wasn’t making a lot of money. It took years to find places I could go to regularly and find something that fit me and looked the way I wanted it to look.

Fashion magazines often assume that you have limitless amounts of money to buy fancy clothes, or go to a tailor. Even though it was hard for me to find things that worked for me, it was a huge privilege that I had the resources to be able to eventually get a bunch of new stuff, and as much as I find myself thinking Jesus, who the hell can afford this? when I look at most magazines, I know that the things that I now consider “affordable” are completely out of reach for a lot of people. I think it’d be great to see even more affordable resources on dapperQ, and maybe suggestions of how to use what you already have creatively or to modify it to fit a new style. You know, if you’re changing your gender presentation, it’s hard to know where to go to find what you want, and on top of that to find things that are in your budget, whatever that is.

I was really excited to learn about dapperQ, not only because there was this website to promote visibility but just as a basic resource of “Where the hell do you get shit?!” There are no magazines that cover this. If I had known about all the stores I had known about now when I first started changing how I dressed, it would have been a lot easier.  It’s encouraging to see people of color, people who have different body types, and people with somewhat different gender presentations on this site. Being a part of the queer community in New York and being able to see other boyish queers definitely helped me feel more comfortable dressing the way I do, and I think it’s great that there’s this resource online now too to help other people have that experience.

Written By
dapperQ Team
More from dapperQ Team
*This article was originally published on Find Your Strength: Words from...
Read More