This is the first in an ongoing series exploring dapperQ fashion in the workplace – how we do it, how we feel about it, and how we are changing our workplaces and culture simply by being ourselves.

You’re a contributing member of America’s workforce.  Maybe you sit in an office analyzing facts and figures.  Or you might teach the country’s youth history or how to construct a grammatically sound sentence.  Or perhaps you’re in the creative sphere, decorating every corner of our world with words or images.  You sit there almost like everyone else…almost since you are a queered version of the same thing.  You are a far cry from a wolf in sheep’s clothing.  Instead, you are a dapper and somewhat masculine woman or genderqueer draped in creatively adapted men’s clothing.

Congratulations!  Being the gender blender in your workplace can be quite the adventure.  It took me years to find my ideal workplace fashion and be completely comfortable with it.  And still, my workplace fashion changes with the seasons and with what’s “in” or “out” at any given time.  I also find new ways to adapt the pieces of men’s clothing that I find and love on an ongoing basis. It’s not easy being “different” from what seems to be the standard for the general population, but what fun is it being like everyone else anyway?!

For years, I was a somewhat feminine lesbian.  By somewhat, I stress that I was by no means a femme.  I was sporty with my somewhat long hair being pulled back in a ponytail most of the time and wearing only women’s clothes much of the time, but often mixing in a man’s shirt or accessory here or there.  As I came into myself, however, I recognized that this sporty femme was not me…or rather, I was not this sporty femme.

I knew that I needed to break out of that uncomfortable person to become the “real me.”  After all, I had it in me.  In my childhood, I was the quintessential tomboy.  As I became more comfortable with that ten-year old tomboy (pictured below) actually being the same person I was as an adult, I felt more comfortable going back to the same style of short hair and boyish clothing that I was comfortable in as a child.  This was a liberating process, but it was indeed a process that took place over a few years. 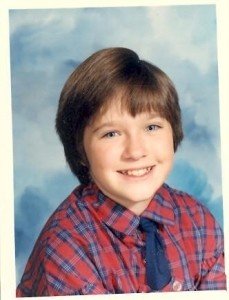 As an adult tomboy/soft butch, changing my fashion in my private (i.e. non-work) life to one incorporating the men’s clothes that I feel comfortable in was no problem.  However, I initially had my reservations about taking this mode of changing fashion into the workplace. My primary concern was, “how will people react?”  I had been dressing a certain way for years, and although I was uncomfortable dressing in somewhat feminine clothing almost the entire time, this very public transition in the workplace was difficult.  But the process began.  I started wearing the men’s shirts and sweaters that I wanted to wear.  Then I added into the ensemble the men’s pants and belts I felt most comfortable in, followed by an occasional men’s blazer or jacket.  Next, I began to add in a tie now and then.  Through it all, I grew to realize that nobody cared.  I was the only one who was concerned with my change in fashion.

One day in the office, I realized just how little other people cared about how I dressed, and beyond that, even supported who I was.  It was after hours in the office, maybe around 6 or 7pm, and most people were gone for the day.

At this point in my fashion transition, I didn’t wear ties in the office at all out of fear that it might make me stand out and look “too gay.”  However, on that night after work, I was heading to an event – one that required me to look as dapper as possible – and so the proper tie for the occasion was in order.  But, I had to put on my tie before the event so I could walk in fully prepared and fully dapper, and didn’t want to have to resort finding a Starbuck’s bathroom in which to finish getting spiffied up.

I went into the ladies’ bathroom in the office to get ready, which of course included putting on my tie.  I knew there weren’t many people left in the office and that I could probably avoid any awkward looks if anyone saw me wearing a tie at this point in the day.  However, as I walked out of the bathroom, the company CFO passed me in the hall.  “I like that tie,” he said.  I know he could see the surprise and discomfort on my face.  I had seen him only hours before though, sans tie.  His comment, however, was sincere and his look was without one bit of surprise.  The encounter was pleasant and, in a way, liberating since I saw that someone in our office, and in a high level position at that, had seen me in my full “real” style and seemed to be absolutely accepting of everything about it.

A couple days later, my boss, who was also an executive at the company, made a comment to me during a casual conversation. “We should have a tie day, when everyone wears ties!”  And he smiled.  He was one of the most amazing, genuine, and open people I’ve ever worked with. I figured at this point that the CFO had told him about my tie and that it was his way of saying that it was okay for me to wear what I wanted (within acceptable business dress code, of course).  The experience made me realize that I cared more about “filtering” my style for what I thought other people would accept than people actually cared about what I was wearing.  After this, I felt exponentially more comfortable being myself in the workplace.

While I can’t guarantee that all workplaces will be as open and accepting as the ones I’ve worked in, I can guarantee one thing – you can never go wrong with just being yourself.  As I became more confident with the “real me” I am and the way I want to dress at work, I became less concerned with what others thought.  With my acceptance of the way I feel comfortable dressing at work, I have become much more confident in my attitude of “this is who I am, and if you don’t agree with my style or with any part of who I am, please just leave me alone.”  If you’re true to yourself, things will usually work out.

In the next installments of the “dapperQs in the Workplace” series, we’ll take a look at the mechanics of transgressing men’s fashion in the workplace and what to wear, as well as other hot related topics to follow.  In the meantime, we can all take pride in being the dapperQs in our workplaces.

Written By
Jody Mousseau
More from Jody Mousseau
In the first installment of “Queering the Workplace”, I talked about my...
Read More