dapperQ is proud to present the fourth installment of He Said/We Said, based on the Fall 2011 line from Moschino.  HS/WS is the brainchild of its series editor: Anita Dolce Vita. Photos for dapperQ by Yi Ching Lin.

During the process of choosing the inspiration outfit, I could identify only vague themes of opposing dualities in the collection. I started to feel as if GQ’s description was more a clever play on words than a spot-on review. However, I was still intrigued by the theme and curious to see how our models would interpret an ensemble from Moschino’s fall designs. 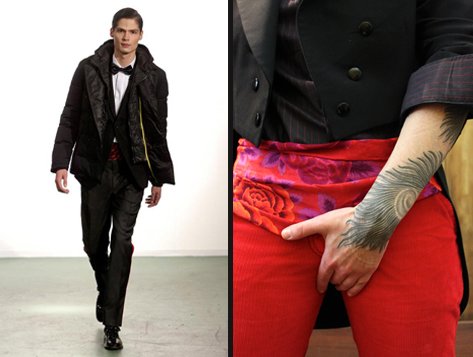 Sure enough, the concept of “everything and its opposite” was more pronounced in our models’ interpretations than it was on Moschino’s very own runway! This was clearly exemplified when Ariel Speedwagon arrived at the photo shoot wearing pink glitter AND a bow-tie. Let me make you privy to another fun fact: I didn’t even mention a word to the models about GQ’s description of the collection, meaning that their interpretations provided more credibility to the assertion that queer fashion reflects “everything and its opposite.”

“Because phenomena are constantly overlapping and change is always being manifested spontaneously, Taoists regard any phenomenon as containing the seeds to its counterpart” (don’t get too excited, folks…I got this from the Complete Idiots Guide to Taoism). Everything and its opposite. The freshly cut lilacs at the flower shop representing life, while also beginning to wilt. Pleasure and pain. Masculine and feminine existing in one space. All expressed here in dapperQ fashion.