Just two days ago, on my hike up Mt. Morgan in the White Mountains of New Hampshire, I was thinking of you, dear dapperQs. I was thinking about how we would collectively work in a six-week, on-line butch meet-up to define our style guide (details soon.) 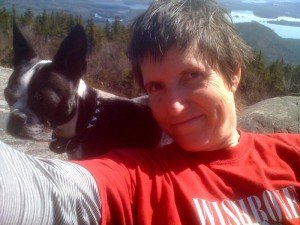 This self-portrait was taken and e-mailed to my wife in Hawaii at 1:30, five minutes after I had consumed a banana – the only morsel of food I took on this journey that was supposed to take 2.5 hours.  The shot was taken of me and my buddy Animae at the summit ten minutes before I stepped into frozen snow and water and lost the trail. Twenty minutes before we were scrambling through more piles of bear poop than you can shake a stick at, or ought to take time to do so in such circumstances.

But since it was a lovely day, and only by that time 2 pm, I tried to convince Mae that there was no need to panic. As we bushwhacked along a stream whose downward flow seemed to me a sure route to the bottom, the brambles began to tear. Mae fell into those cold waters twice. I slipped and slid through mud that had (did I forget to mention) officially closed the trail.

I had a map but no compass. A jacket for me and one for Mae. A water bottle. Why worry? Why not instead see this as a metaphor – such as Plutarch’s morally instructive ascents –  rather than another bullshit example of how I can’t navigate my way out of a paper bag?  Because I am a Leo and a butch, I always think, “this time will be different.”

We bushwhacked for about 90 minutes before we spilled onto a logging road. Since surely loggers must take their logs to market, I knew we would be fine. Shannon managed to find me in a cell phone hotspot when I had finally stumbled upon some summer cottages. I explained my situation and that, having found houses on this dirt road, we must surely be on our way out.

Mae and I walked hard on that dirt road for three hours. Then we came upon a gate that I recognized having turned away from near the summer cottages.  I groaned loud enough to make Mae turn around. We had gone in a circle. By now it was about 6:30. (Remember Gilligan and his THREE-HOUR TOUR.)

I knew how to get to back to the summer cottages but not how to get beyond them in any way more productive than I had done. The one other option had a big fat sign that said, “Dead End. Do Not Enter.” We started back in the opposite direction on the logging trail until I accepted that night was falling fast and we had best find shelter.   Then I remembered cell phone service near the houses.

To make a long story only a little shorter, I called 911 for the first time in my life. The dirt road wasn’t named and the dispatcher couldn’t determine my location. The sheriff’s office and volunteer fire department dispatched teams. Unfortunately, none of us knew what side of the mountain range I was on. (Ah, the river that gently flows to the other side of the range without me noticing and thus eliminates even the slightest chance I might have to get my bearings via the map and a setting sun.)

Fortunately a fish and game warden recognized the name, Brunelli’s Camp, etched on the sidewalk of the ramshackle barn. He called me on the cell and informed me that he would mount his  sturdy four-wheel drive with an ATV in back and drive on over.   Fortunately, he had relieved those drunken Brunelli boys of their snowmobile on at least one occasion. Then there was his suspicions of what they did with the fish he used to stock a nearby pond.

My savior, Ranger Brad, also told me he pulls about 20 bodies a year out of the White Mountains. One guy drowned whitewater rafting last week. Two days ago, another slipped in mud and ice and fell 150 feet. Brad found him by the waning light of his headlamp.   His face was swollen shut but he was able to walk out once they got him down the frozen ledge, inch by inch, using crampons.

Brad also told me, when houses and civilization of sorts became apparent about ½ a mile past the dead end sign, that it was meant to stop snowmobilers, not me. It took him 45 minutes to drive us to my car.  I started the hike at 11:30 am and arrived home at 10 pm.

What does this have to do with dapperQ? Little I suppose. But here’s a poem I penned one spring long ago that reminds me in this New Hampshire spring of you, friends I have only soon to meet:

Spring rains won’t be denied
coaxing, instead, reluctant blossoms
from overripe buds
with an intentional inevitability
even God ain’t fool enough to resist.
And you?