Magnetic attraction is a powerful ally for those looking to love our mates for the long haul.  But equally important, methinks, is consistent appreciation for the alchemy of small synergies that can make union with another so profound.

Aaron, 25, and Shelly , 30, bring to their newlywed life a thrilling combination of each.  These adorably queer theologians were wed on September 25, 2010 at St. Mary’s Episcopal Church in Manhattanville, NY where Shelly first served as deacon.  Their ceremony was followed up later that week with a backyard reception in Shelly’s hometown of Zillah, Washington. 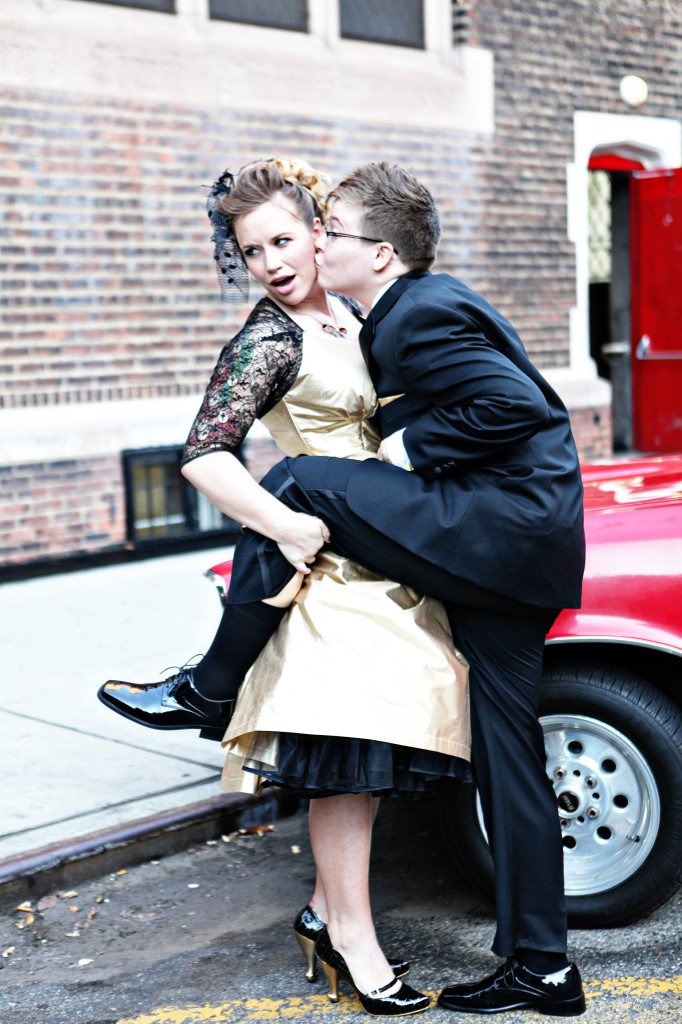 The couple met three years ago at the seminary they both attended.  According to Aaron, “Shelly sidled up to me at beverage night.  Within half two and half minutes, I knew she was queer, femme identified, fresh out of a long-term relationship, and available.”

Not surprisingly, Shelly’s clarity about what she wanted in a mate was equally strong when it came to what she wanted for the dress in which she would wed that mate.  Her distinctive vision?  A“40’s cocktail dress that was hi drama, hi femme and a little rockabilly.”

Custom made by a Val Mayse — a costume professor at the University of Washington — it was gold and sparkly, with a giant square dance petticoat underneath.  Look closely under the sleeves — made of lace in a bell-shaped flower pattern – and you can see Shelly’s tattoo of the Virgin de Guadalupe shining through.

Aaron, who told me they both felt  “a lot of love” for the Virgin, echoed that image in cufflinks she mined on Google.  Augmenting the two-piece Jones New York Elements tux she bought from Men’s Wearhouse (guided by advice from Sartorial Butch) was a pocket square cut from the same fabric as Shelly’s dress.  That square was ably folded by one of NYC’s most dynamic and dapperQ performance artists, Ariel Speedwagon, who also participated in the ceremony.

The black and gold color scheme for Shelly’s dress was determined by these amazing spikes which are from John Fluevog Body Parts Family, created ten years ago, as John’s Anti-AIDS shoe. 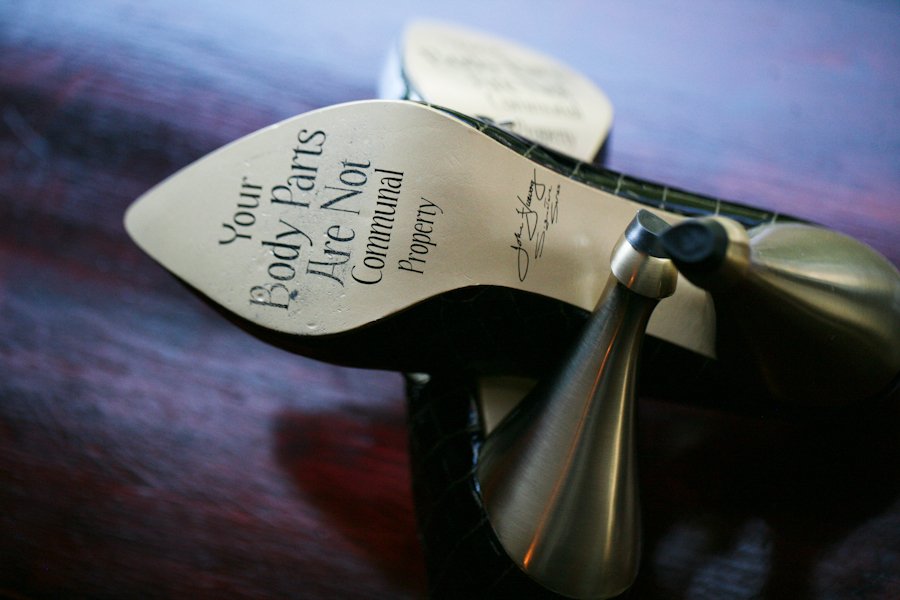 The line written on the heel –“Your body parts are not communal property”  — also had a very personal meaning for the couple. Shelley told me, “Both of us are freaked out by erasure of identity when folks use word ‘marriage’ because there is so much history around chattel and property.“ Responding to those realities, the couple counted on more than John Fluevog.  tweaking traditional liturgy so that it could both acknowledge their religious traditions and, as Shelley told me,  “…the butches and femmes that came before us.”

CONSIDER YOUR OWN DETAILS

When it comes to planning your fashion expression, what elements can be incorporated to illuminate the power of your union?

Consider cues from your birthplace. Are their cultural markers that can be included in your accessories? Sunflowers for your bouquet? Rockabilly hairstyles?  Ethnic textiles? A Stetson?

Echo those who came before you. Accessories sported by your parents or grandparents provide a great way to honor your lineage.  For my wedding, I wore the diamond-encrusted initial ring my mother made for my father.  Robin Cloud wore her grandfather’s Panama.  What about wedding photos from your blood relatives or chosen family?  Do any styles resonate and beg for your bold reinterpretation?

Claim queer precedents. Whether it is colors, patterns, textures, styles or accessories, fashion options for your big, old gay wedding are limited only by your imagination.   For Aaron and Shelly, that meant butch/femme fashion.  Shelly told me, “Second wave feminism described that dynamic as super destructive, — an imitation of patriarchy.  But I find it sexy, liberating, and authentic.” Aaron added, “If you are gonna plan this date that is in some ways an expression of your life together, take the time to go really deep in to what makes you most honest and most sexy.”

As originally published on GayWeddings.com.

Written By
Guest Authors
More from Guest Authors
Here’s an e-mail I recently received from a dapperQ that expresses feelings...
Read More