Apparently I’m about two months late on this story. But, if you’re like me, your busy schedule does not allow for much reality t.v. consumption. For the past six months I have been drowning in a sea of work: exams, papers, grant writing projects, planning activities for visitors who couch surf in my Manhattan apartment. So, the other night I decided to indulge in some reality t.v. and let my brain just rot away. While channel surfing for the perfect hot mess to watch in horror, I came across some reality t.v. that was surprisingly nourishing.

The Learning Channel was re-airing an episode of Cake Boss, which originally premiered on October 3, 2011, in which the star of the show and owner of Carlo’s Bakery, Buddy Valastro, agreed to custom make a wedding cake for Dee Smith and Kate Wrede, one of the first lesbian couples to be legally married in New York after Gov. Andrew Cuomo legalized gay marriage.

Valastro recommends that the top of the cake be adorned with a sculpture of the lovebirds. When they explain that Wrede will be wearing and dress and Smith will be wearing a tux, he says “ok, then that’s how we’re going to sculpt you guys” without batting an eye and follows with “alright, I love it.” 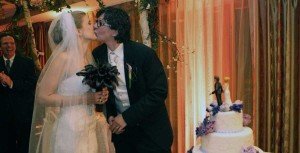 While my Cake Boss accolades may be two months behind, it is never too late to share a resource with our dapperQ readers and to express appreciation to our allies.