You’ve found the one. You are ready to take the plunge. But you will be damned if your biggest day forces you into a dress. You know who you are and you know that your reasons for “transgressing bridal fashion” are as unique as you are.

At dapperQ — my site for those transgressing men’s fashion — I’ve spent the past year exploring options for those of us who look our best in clothes that are either androgynous or “masculine of center.” And, frankly, worthy ones are limited. If you are plus-sized or constrained by a tight budget, it can be even tougher.

But, got a little scratch? Then, consider having a suit made just for you.

That’s what I helped Robin Carson Cloud do for her wedding to Sarah Carson Cloud who I featured in my first post for GayWeddings.com. In an article on “suiting” gay brides, Washington Post reporter Monica Hesse quoted Robin describing herself as “the Ellen of the relationship. ” In addition to being what I would call a soft butch – like Ellen – Robin is also a comedian recognized in, among other places, Go! Magazine’s 100 Women We Love. 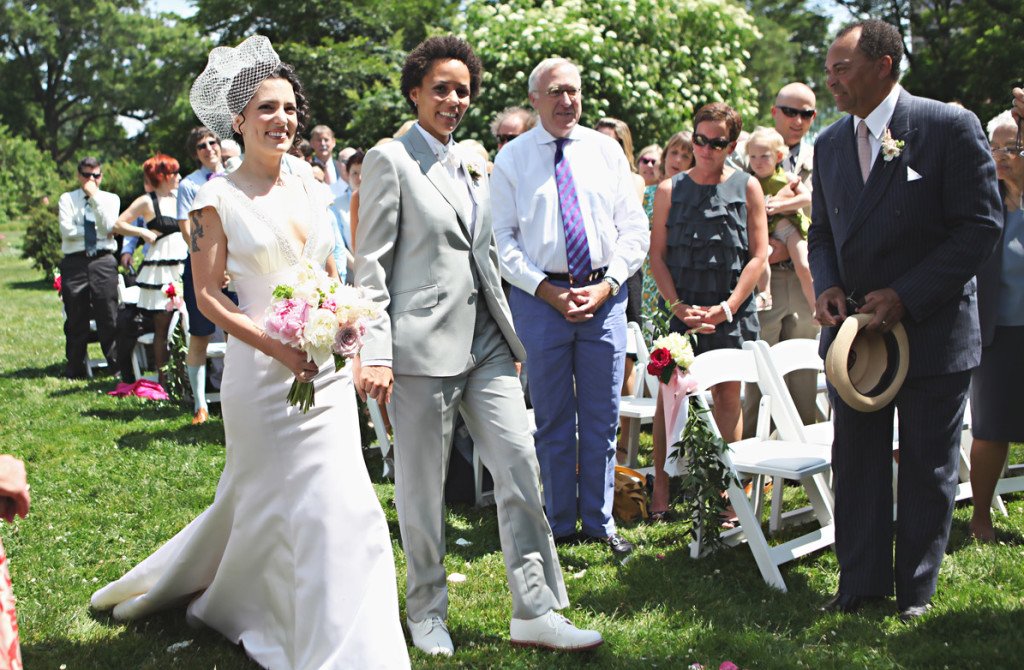 Because Robin is a celesbian and because she knew Sarah’s gown was formal, she wanted something elegant. The couple decided they wanted to surprise one another with their outfits, so this funny lady also knew she was on her own. (That was my lucky break because, when Robin called for help planning her outfit, I gained a friend for whom my admiration and respect grows daily.)

Because Robin’s requirements included accommodating but not accentuating her curves, I suggested we try MySuitNY (locations in NYC and White Plains, NY. ) For a base price of $495 — which includes 70% of the fabric choices – she was able to customize wide-ranging details for a suit based on the results of more 30 measurements.

I had met our salesman, Chike Walker, on a previous visit to the store and made our appointment with him not only because he was eager to help but also genuinely puzzled when I asked if MySuitNY was open to taking money from my brethren.

During our appointment, Robin and I both learned about the many choices available to men who custom build their suits. For instance, there are four buttons and corresponding button holes on the sleeve of most suit jackets. When Chike has a suit made for himself, he always uses a blue highlight thread on the third button hole because he is the third son. One of his clients always outlines the first button hole in gray because he has gray in his hair. Robin chose to outline one of her button holes with a subtle but oh so hot pink.

Be aware of the fact that MySuitNY is customizing suits based on basic men’s body types. The same is true for Indochino — an internet-based option with a starting price of $295 — which appears worth exploring for those who aren’t in NYC. The folks we met with, and feedback from a reader who contacted Indochino, concluded that neither company could guarantee their men’s suits would work for women.

What I think reps from these companies don’t know is that while many of us want a suit that really fits, we also don’t want it to look like a woman’s suit. (We dread no man but we do dread the ‘dart’— for details check out this dapperQ street fashion video entitled: “What Would Ellen Do?”)

Chike, however, assured us that many men also have hips and big butts. While the majority don’t have breasts, they do have pot bellies. We could easily see how room needed to accommodate a man’s belly could also accommodate our gorgeousness.

Was Robin’s custom suit a success? Here’s what Sarah had to say: “When I saw Robin, I died. She looked so gorgeous, so handsome.”

Robin Cloud and BrideRobin rounded out her outfit with white bucks from Bass, pink socks from Uniqlo, a pinpoint oxford shirt and white silk bowtie from J. Crew.

Strolling from the ceremony and in to her new life, she chose the formality of donning a Barlesoni Panama hat. It belonged to Robin’s grandfather who recently passed away, and was handed to her by her father.

As originally published on GayWeddings.com

Written By
Guest Authors
More from Guest Authors
I’m in Louisville, Kentucky jamming in a friend’s office attic on the...
Read More