Note: CorporateQ is a series that focuses upon how masculine presenting gender queers are bringing their dapper selves to the workplace.

Expectations about how to dress for a corporate gig almost kept Nancy Blaine out of publishing. But a love of books helped her press through to a career that has garnered accolades including “Editor of the Year” from Houghton Mifflin. In this interview with dapperQ Founder Susan Herr, Nancy talks about the intersection between fashion, career and gender identity.

Susan Herr: Buddy! It was at your house in New Hampshire that I came up with the idea for this website and the name: dapperQ. I think I know you pretty well, but I’m eager to use this article as an excuse to learn even more about you.

Nancy Blaine: I remember the morning you came downstairs and described it to us. Proud of you, Bud.

SH: Will you start by telling me how long you have identified as a dapperQ?

NB: The first time I got taken in to the men’s department, it was with an ex-girlfriend. I was about 31. Until then, I had been wearing female clothing that had a men’s look.  I remember it was a revelation. It was the first time I felt finally comfortable in clothes. So that is 23 years I’ve been dressing in men’s clothes. I buy clothes exclusively in the men’s department.

SH: That ex was Rebecca Cole, star of one of the first interior design reality shows on TV. It was called Surprise by Design. Did she just escort you in to the men’s department and leave you or did she stick around to provide a few suggestions about what you should buy?

NB: She did stick around but in the clothing area she always let me have my way—not so with furniture and wall colors. I can’t remember if the first time was the Barney’s Warehouse Sale that became my annual suit shop. I liked it because it was so chaotic you could be a little anonymous. My early suits were a bit ill-fitting. It took me awhile to negotiate the sizes and get a jacket that really fit.

SH: Can you remember any particularly bad outfits you sported prior to that time?

NB: I cringe at some of the things I wore before that. By far the worst was a forest green full-length prom dress with dark brown platform shoes. I looked like a tree. No wonder I drank a bottle of Manischevitz Cherry before I went in. No wonder I threw up most of the night and the next day. Things got better for me in the 80’s when I moved to New York and could be androgynous in leggings, combat boots and a motorcycle jacket (thank you Madonna—for so many things.) It was the 90’s when I started buying men’s clothes exclusively and found a style I could really relax into.

When I look back on my career now, I am grateful that I had to learn how to dress. I would’ve just stuck with jeans and t-shirts if I didn’t actually have to dress up for work. It took a long time to find a style for myself that is corporate but not traditionally corporate.

SH: So tell about your career.

NB: I work in higher ed publishing which I’ve done since I was 29; that’s 26 years now. I’ve been an acquisitions editor in multiple disciplines—Anthropology, History, English and now Engineering. It’s been a great career and I’ve learned a lot—about business and about each discipline. It’s a “soft” corporate world. It’s a little leftie and everyone is quite open-minded. But it is still hetero-centric. And although there are a lot of women in publishing, the majority of people at the top are men.

SH: What kind of representation is there among LGBT and gender nonconforming folks?

NB: For a corporate industry, there are a lot of queers. In my industry I would say I dress more radically than most of the lesbians. I always wear men’s suits. I always wear a white t-shirt and an open collar. Still, the two things I never wear at work are a tie or a man’s hat. For me, those items would put me across a line. I know it is homophobia (internal and external). I know it is my own need to (at least) slightly conform. I imagine that will change for me as the world gets more trans progressive. 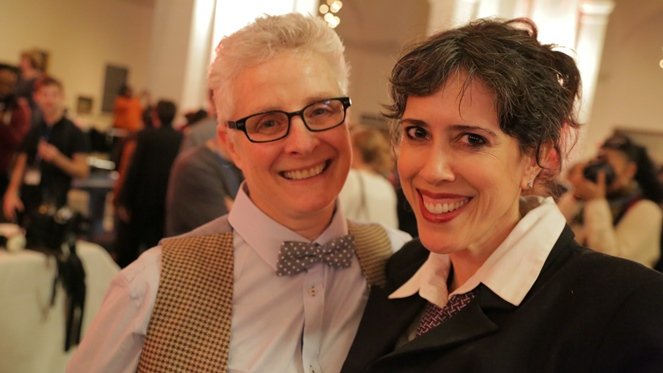 SH: When I asked you to do this interview, you said something like, “…even though I don’t wear a tie?” Which is, of course, why I think your perspective is so important. We are seeing a generation of younger genderqueers who aren’t only out and proud in their social life but who are demanding the ability to bring that pride in to the workplace by wearing outfits that may be considered gender nonconforming. Like you, I often feel like maybe I’m not being bold enough, or like internalized homophobia is something I have to confront and root out. But I think I’d be doing a disservice to anyone reading dapperQ if I didn’t regularly acknowledge the fact that how we present is a deeply personal calculus with very real implications.

NB: So true. Unfortunately I still think there are a lot of judgments being made based on appearance. I have been called out on the street for how I look. At times I have felt unsafe. I am consistently called “sir” and I am often told I am in the wrong bathroom. So that level of being called out has caused me some discomfort. I try to be true to myself but I don’t push the envelope.

Although I acknowledge there is some internalized homophobia, I also think there is still plenty of real homophobia—even in a fairly open minded workplace. If I’m in an interview or trying to sign an author, I have to ask myself, could being in a man’s suit and tie have an impact on their decision? I think it could. That is the area where I am cautious.

But I also long for a world where it will no longer make that impact. I was recently in a restaurant on Park Ave in the 20’s and there was a gender-free bathroom with private stalls inside. It was another revelation. I loved it. But I have a straight friend who was with me who chose to wait until she got back to the hotel.

SH: You’ve apparently walked the line pretty successfully. And you’ve been able to have real impact. I remember when Houghton Mifflin named you “editor of the Year. ”

NB: Higher Ed Editor of the Year. It’s an accomplishment but it’s not NY Times worthy. I’d like to think I have had an impact in educational publishing. In my 20’s, I would say that clothing almost kept me out of the business. I thought I should be a taxi driver or have some other career where I could just wear jeans. Fortunately, I had a strong enough interest in books that I pressed on.

SH: If you had made that choice, as so many of our brethren undoubtedly have, Corporate American would have lost top talent. But let me ask you about masculine privilege. Do you ever feel like part of your success comes from the masculine ways in which you may act, ways that are privileged in our society? And if so, how do you think about that?

NB: I never, ever consider myself as having masculine privilege. I have certainly developed confidence as an editor, but so have many women in my field who are not butch. If anything, I’ve always felt that being a butch put me just outside of the inner circle but maybe I’m just being paranoid.

SH: Us, paranoid?  Okay, I want to ask one last question.   You were suited up from dapperQ’s recent (Un)Heeled event. How did it make you feel about the choices you’ve made and the ways that you have prioritized authenticity?

NB: I had so much pride. I felt like, oh my God, here we are at the edge of the fashion world. It’s never where lesbians have been despite the fact that gay men have been there a long, long time. And so to see these people looking so great…different shapes, colors, genders–it was a revelation—my third in just this interview! Being butch is such an interesting mix on the gender scale; to choose to remain a woman but to have masculine internal feelings and masculine external expression. To not fit the binary and to outwardly express mixed gender. My partner Kate, who is definitely a femme, chose to wear a tie and jacket. She looked fashionable and could pass as straight while I just looked like a butch. But it was a night for us! There was a time when I had so much confusion about being a butch. It is such a pleasure to now revel in it—epitomized by that night at the museum.

SH: You’re a silver fox and I love ya. Thanks for making time for this and thanks for blazing trails…