Welcome back to Fashion Rocks, a series that celebrates dapper musicians across the globe. This week we’re featuring Dinah Thorpe, a Toronto-based music writer and producer who is also currently moonlight as a butch model. Interview and images by Jack Jackson of alljackedup. 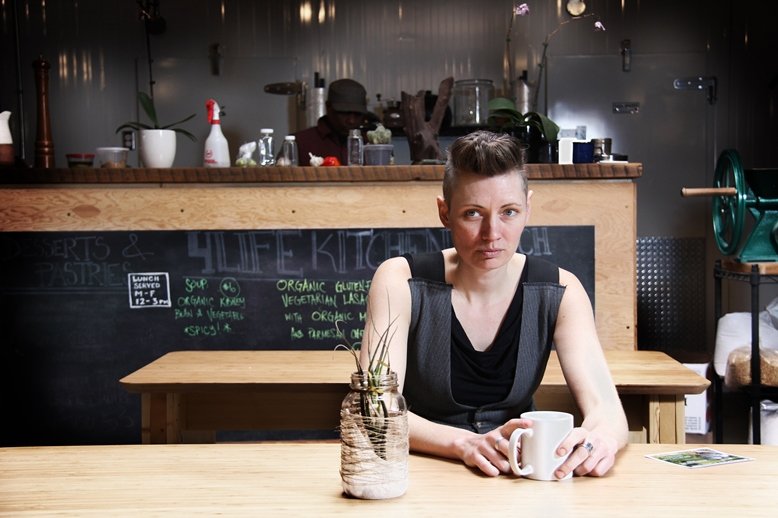 Dinah: I have been performing live since 2008. Sometimes I perform alone and sometimes with other musicians. I had nightmares every night for two weeks before my first show. Eight years later, performing doesn’t terrify me as much as it used to, though I do still wrestle with the discomfort of putting my voice, my body, and innermost feelings on display for people.

I grew up on folk music, Motown 45s, and CBC (our NPR). The first tape I bought was Boyz II Men “Cooleyhighharmony,” and the second was Ace of Base. Michael Jackson, The Indigo Girls, and Portishead were very important to me in high school. These days I listen to a lot of different kinds of music, and I think it shows in my work.

Dinah: I feel like both by doing this work and by constantly studying other people’s, I have improved both as a songwriter and as a producer. But I suppose if I didn’t feel that way eight years in I wouldn’t still be at it. I think I can hear the influence of jazz coming into my work now (in the harmonies, much less linear structures, and weirder time signatures), and trip hop for sure (in the textures and pace).

I feel like I have figured out how to express myself with the tools and skills that I have, for now. There are days when I feel my work is shit, and that perhaps I am, and on those days you have to leave the studio and find something else to do. Or just bang on the drums for a while. And then come back and start something new. I always have at least two songs on the go at once, so if I get stuck with one or don’t like where it is going I can leave it for a while. Being an artist seems to require finding a balance between being hard on yourself and being amazed with yourself. Or maybe that is just life for everyone. 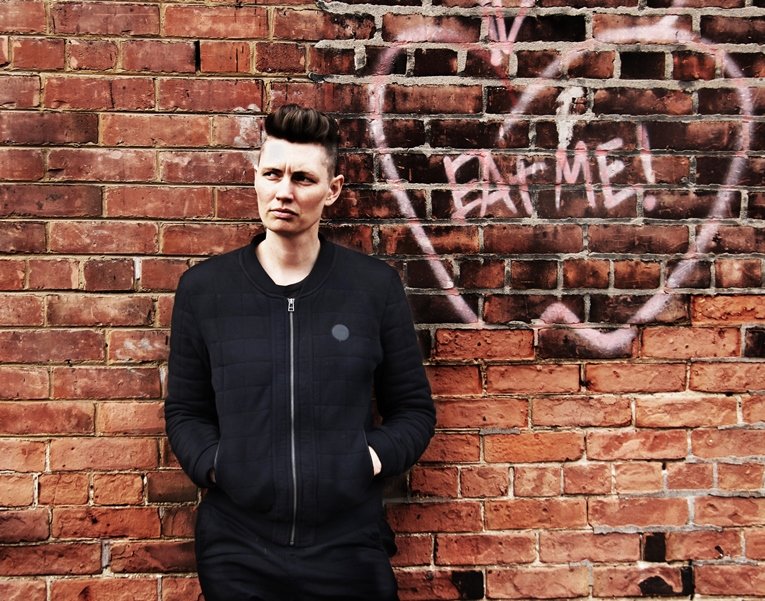 Dinah: I find this question next to impossible to answer. I sing a lot, and layer my vocals. I also make beats. I use acoustic instruments and electronic ones. You can dance to some of my work, but in more of a slow dirty way rather than a fast hyper way. Sometimes I have a lot to say and then I try to rap. My music is definitely alternative, which to me just means it doesn’t sound like mainstream things, and also that I am very queer and so of course my work is too.

Dinah: I live in Toronto, where it is hot in the summer and snowy in the winter. I like having seasons, and they definitely influence my work. When I am writing, I stare out my window a lot and sometimes end up writing about trees or squirrels. I also write lyrics outside a lot in seasons other than the winter, and sometimes in beautiful places when I get the chance to travel. In the winter I tend to get more recording and arranging done because it is not fun to be outside. On a smaller scale, I think my little studio influences my writing too. It sounds really lovely in here and I am sure its size and shape affect what comes out of it. 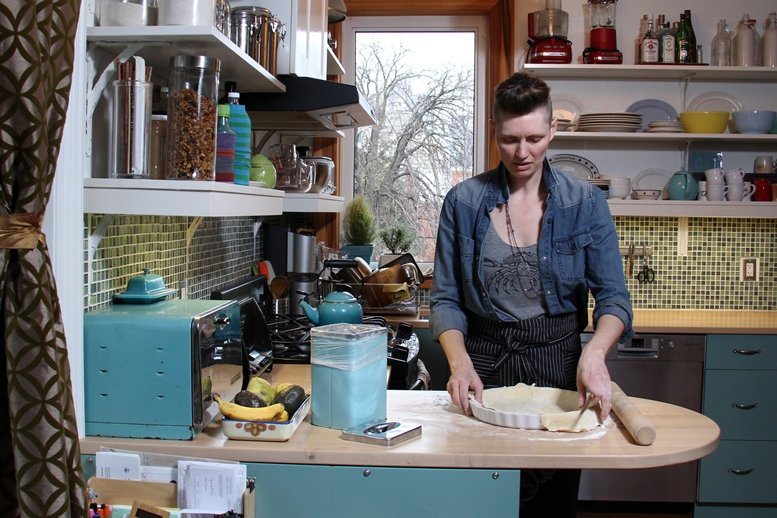 Dinah: Tricky. The XX. Tracy Chapman. Lapsley. Lisa LeBlanc. The Buffy Ste. Marie and A Tribe Called Red collaboration “Working for the Government.” TR/ST. Alejandra Ribera’s “La Boca.” Kim Harris’s “The Weight of it All.” Cat Power’s “Hate.” Nina Simone, as always. Her version of “Trouble in Mind” is so cheerful that you can almost pretend it is not about lying down on the railroad tracks.

Dinah: Interesting question. And yes I think the two things are entwined—the styling of yourself and the styling of your artistic work. Not just musicians but artists of all kinds, and maybe especially those of us who are performers of art as well as makers of it. People end up either choosing to or having to look at us a lot. So the way we present ourselves I guess becomes an act of art-making. Not that there aren’t days when I throw on whatever is on top of the pile or least stinky, because there are those days too.

I have begun thinking about style and fashion only recently in any kind of concentrated way. I guess it is part of a larger process of figuring out and becoming comfortable with who I am and what I look like. For a long time, I think I tried to blend in, and was pretty unsuccessful at it because of my height and my gender expression. Lately, I am attempting to embrace the fact that I tend to get noticed, even though some kinds of attention are more welcome than others. I don’t mind curiosity or desire, but confusion and disgust can be hard to take.

Buying clothes has always been fraught for me, because it is nearly impossible to find clothes that I like, that fit me, that I can afford, and that I feel okay about ethically. It’s a wonder I find anything to wear! More often I just leave stores sad and exhausted and determined to open my own store called “soft butch” or “somewhere in between” or something to that effect. I love clothes and I could spend a lot of money on them if I had it and if there were stores that sold what I like to wear. But for me it is all intertwined—being genderqueer, being an artist, being creative and resourceful, using my imagination in what I wear, how I look, and how I live my life. 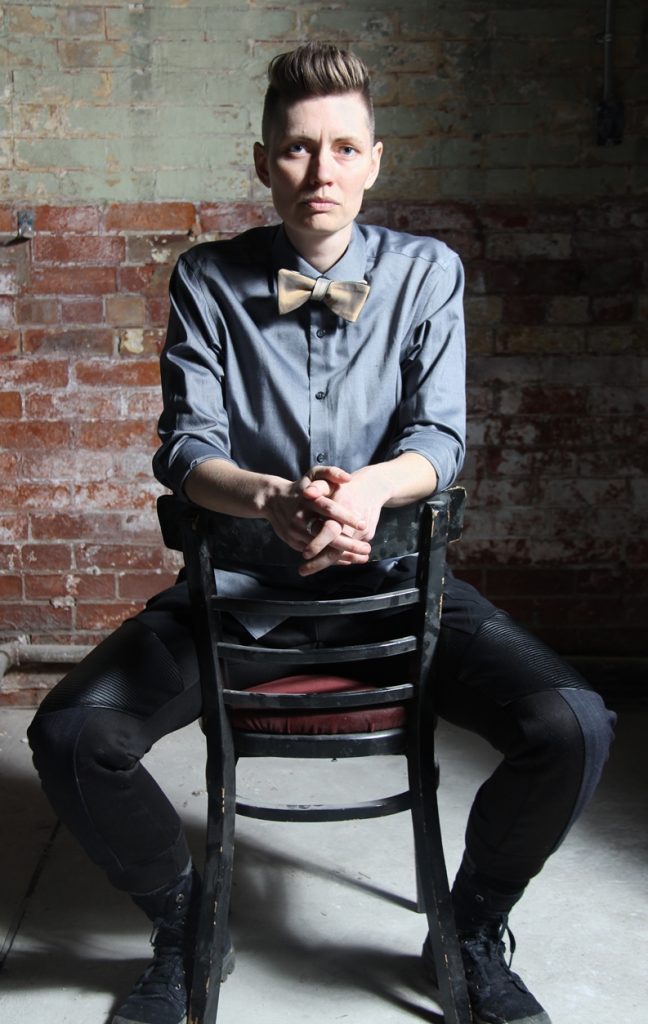 Dinah: My clothes have always had to be functional, and they still definitely are. I like to move around a lot, I ride a bike everywhere, and always seem to be fixing something dirty or carrying something heavy. So my clothes have to be able to do that stuff with me. But I am also paying more attention to what I wear these days. Because if I am already a spectacle I might as well try to be fabulous.

I have an office job part-time and so I have had to assemble a wardrobe for that that is stylish and comfortable and also presentable. For those of us who exist on unusual places along the gender spectrum, office wear can be both a challenge and an adventure.

Dinah: The queers I know. The artists I know. Fabulous people I see in Kensington Market or on Dundas West. I like some men’s fashion right now. I feel it is the first time I have consciously taken my cues from there—skinny rolled-up jean shorts, skinny jeans, drop-crotch pants, long tank tops…But I also like high glam sometimes too, and have been known to pull out a shoulder-padded sparkled blazer that could have been worn by either Bowie or your grandmother.

Dinah: Sneaker boots. The lovechild of two of my greatest loves. 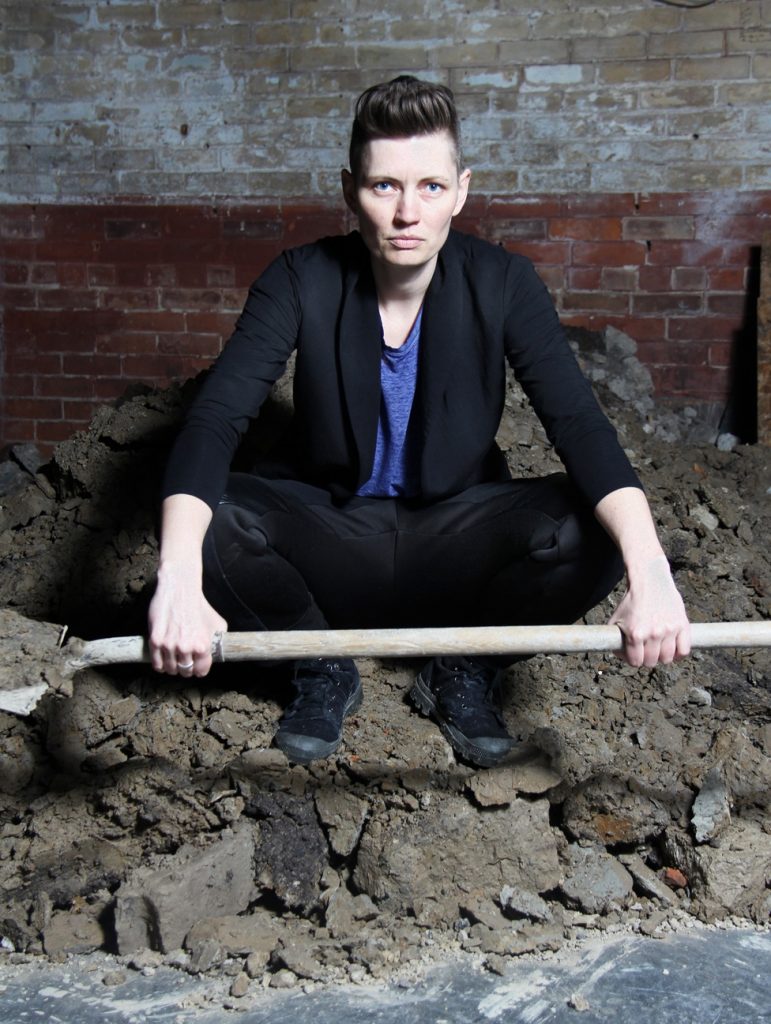 Dinah: Right now I am working on this fashion show called Superbutch, happening May 14 in Toronto. It’s part of Mayworks labour arts festival, and I am working on it with Heather Blom and Jack Jackson of alljackedup. The concept has opened up a space for having a conversation around female masculinity and transmasculinity, and the relevance of butch as an identity category in 2016. And its race and class and cis and colonial histories too. People have really come forward to be part of the event and that is really great and unfamiliar for me. I feel like I often work in a bubble, so it is really fun having a team.

Once that show is done I look forward to getting hot and heavy with writing music again. I haven’t had time for it in a couple of months and, as my friends and family will attest, that makes me a rather grumpy person. I feel another album coming on so that is an exciting cliff to stand on.