Amanda and Katy followed the millennial trend and met through a dating app called HER in August 2015. More specifically, Amanda’s friend, Maddy, downloaded the app for her and started swiping through women, only to land upon Katy.

After a few failed attempts to meet up, Amanda invited Katy to a bar for a “jersey party” where everyone wore sports jerseys (so romantic!) and the two instantly connected.

Since that day, the two have been nearly inseparable best friends in love and spent their time on running dates and sushi dates. They have gone through many life events hand in hand, danced at weddings together, and have stayed sane while moving each other into apartments multiple times.

Katy and Amanda began talking about their futures, babies, travel, and Katy knew that this Amanda was the epicenter of her future and all the adventures that would lie ahead. Without Amanda’s knowledge, Katy had a ring for Amanda that sat in the closet for a month. Katy also designed several signs for Amanda that would one day be a part of the big proposal.

Amanda went out for her weekly “long run” on a snowy day in December with a friend, Jamie. As the door shut when Amanda left for the run, Katy sprung out of bed, got ready in 10 minutes, and left the house with Dee (Amanda’s mom) and all of her supplies. Anna Marie (Katy’s best friend) met up with them to help capture the moment. It was freaking frigid out there, but the three proposal crew members set up signs on trees and in the snow, expressing to Amanda that she wanted to spend the rest of her life with her. Amanda finished up her run, seeing the signs and then Katy standing inside a circle of Siddhartha heads. Amanda was shocked and Katy said a few words about what marrying Amanda would mean to her, and got down on one knee to ask her to be her wife. 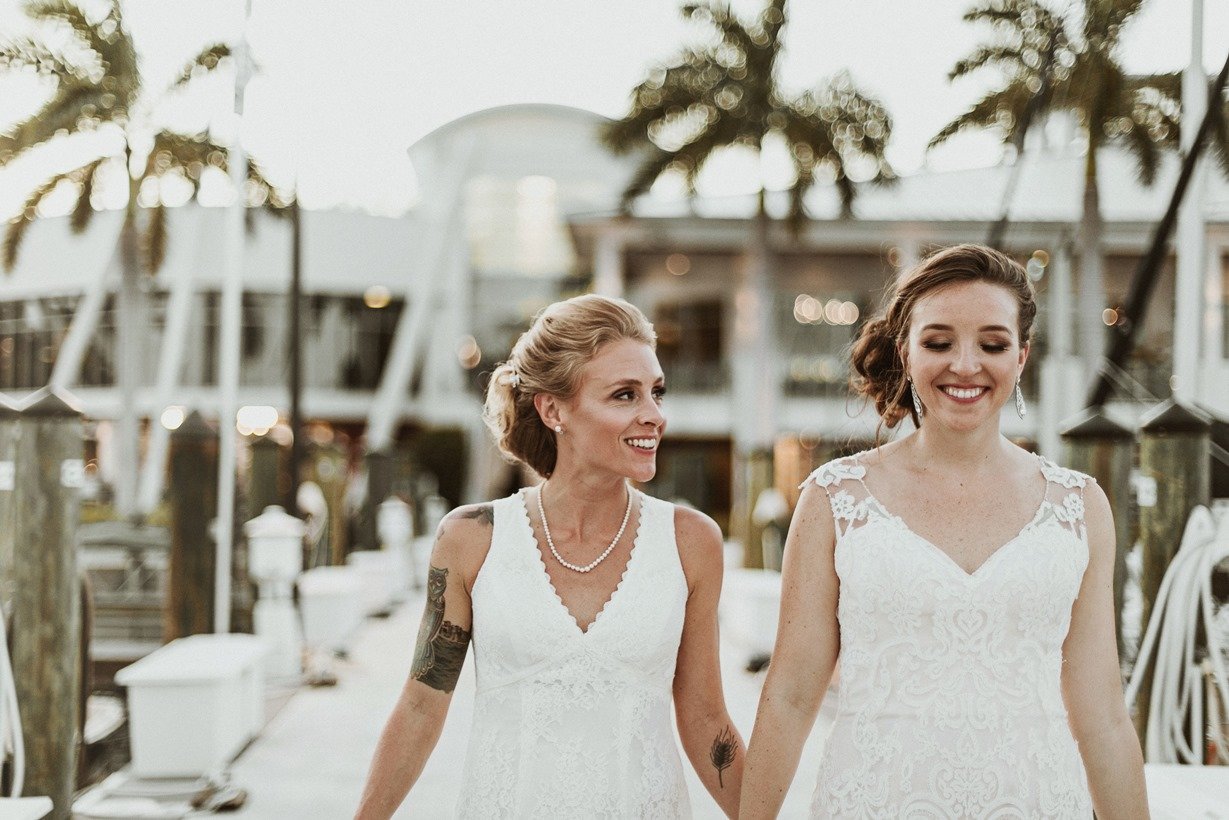 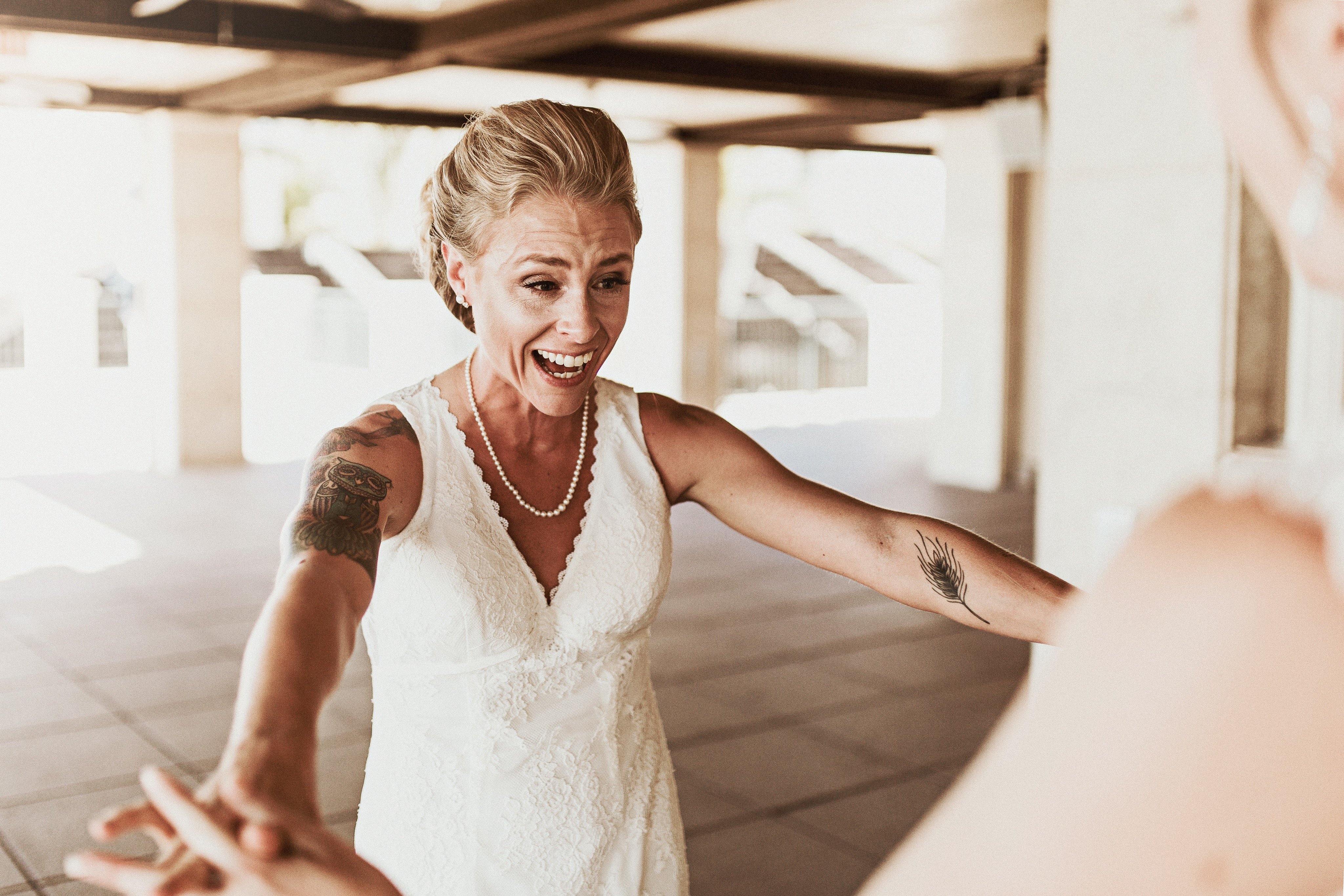 Their wedding theme was beachy and joyful (Katy’s whole pinterest board is here). They wanted pops of bright color with hues from the ocean. The bridal parties wore either a dress or pants/shirt option and they got to choose which. Tying into the theme, they went with an array of blues for the dress option – navy, sky blue, grey-blue, dusty blue – the goal was to create an ombre water wave effect. The pants option consisted of navy pants, brown shoes, brown belt, ivory/white button up shirt, navy suspender with gold outlining, and a floral bow tie to match the bouquets and our their fathers’ ties.

Like most weddings, there finding the “just right” attire took work and was not without any challenges. Katy stated:

Most of the options I saw on Pinterest for pants and suspenders were featured on (what appeared to be) men, and I had to cross my fingers that the same ‘look’ would be rockable by my women friends in our bridal party if they so chose. I had no idea that wearing suspenders and a belt at the same time is pretty much nonsense and a borderline faux pas. So, I learned that the day before the wedding but asked my bridal party to wear the look anyway. Lastly, I was the type whose parents sent me off to cotillion (etiquette class) at a young age. The wedding was hosted at a yacht club… hello wealthy white people who *sometimes* have narrow views of how certain individuals ought to dress. My dad wasn’t too happy when he realized a female bridesmaid would be wearing the same thing that my brother would be wearing, but he got over it. I think it would’ve been even better if I forced my brother to wear a dress in spite of my dad. 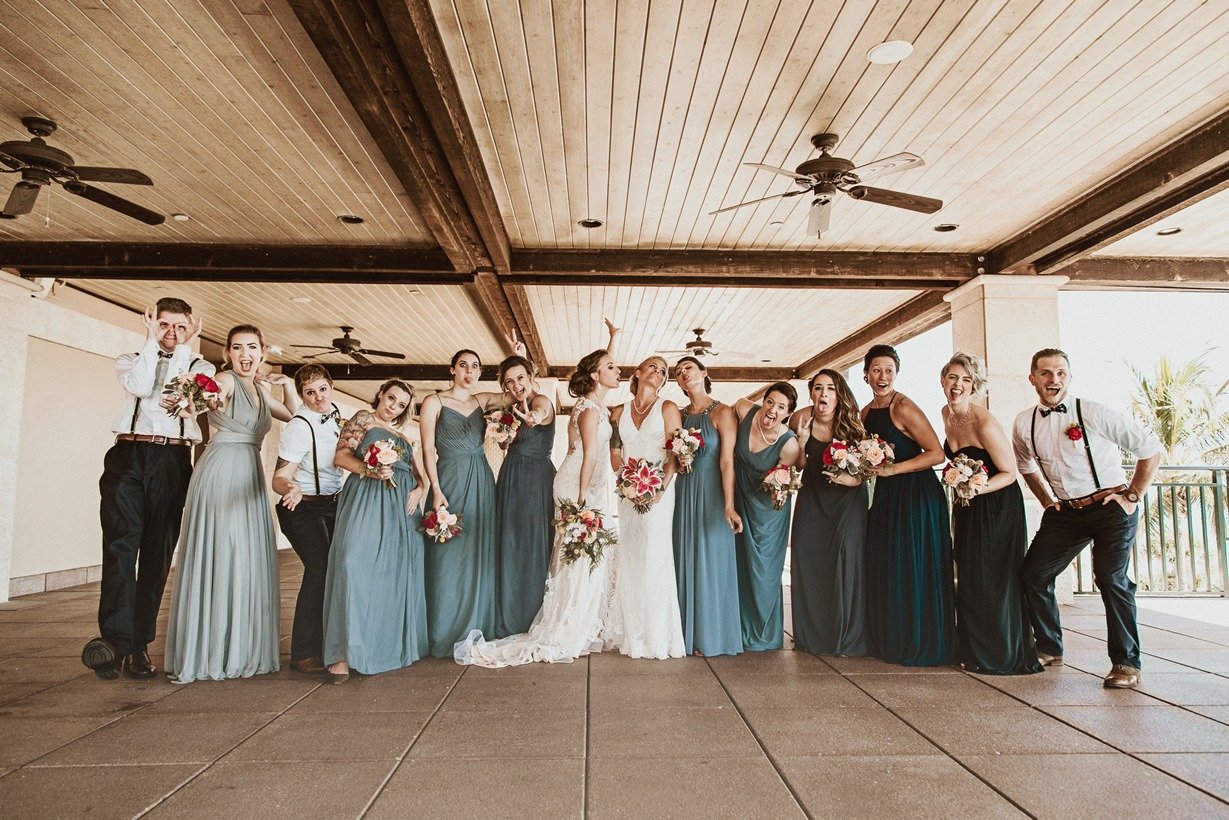