Artist, style icon, and fashion designer Alok Vaid-Menon released their third fashion collection in collaboration with Adrianne Keishing this year. Shot by the photographer Ayush Gupta in Delhi, the collection brings femme fashion to the forefront and challenges gender binaries and transmisogyny. I connected with Alok to chat more about the collection, the inspiration behind the designs, and what makes femme fashion transgressive.

dapperQ: Can you tell us about your latest collection?

Alok: This is the third gender neutral fashion collection I have designed. I hesitate to call it “gender neutral” because I believe fashion should already be gender neutral, but I continue to do so because I think there is something meaningful about taking silhouettes, patterns, colors, and forms like skirts, bras, gowns, and bright colors that we have been taught to associate with ‘women’ and ‘femininity’ and saying these don’t necessarily have to be gendered – they can be worn by all bodies.

This collection is called NATURAL BODIES and each piece is named after a word like ‘BIOLOGICAL’ and ‘INNATE’ that is being used to police trans people – and especially trans feminine people – as counterfeit and unreal. There’s this transmisogynist and femme-phobic idea that if we want to be “taken seriously” then we should just “tone it down,” but why is our authenticity linked to our appearance to begin with anyways? I wanted to show is that for many of us actually wearing a full face of makeup and a dress is precisely when we feel the most real and are the most natural. Rather than whiteness and cisness being able to speak exclusively for nature, I wanted trans femmes of color to be able to have authority to reclaim the natural for ourselves. This collection is an aesthetic argument that queers get to define what is natural to us rather than the other way around. 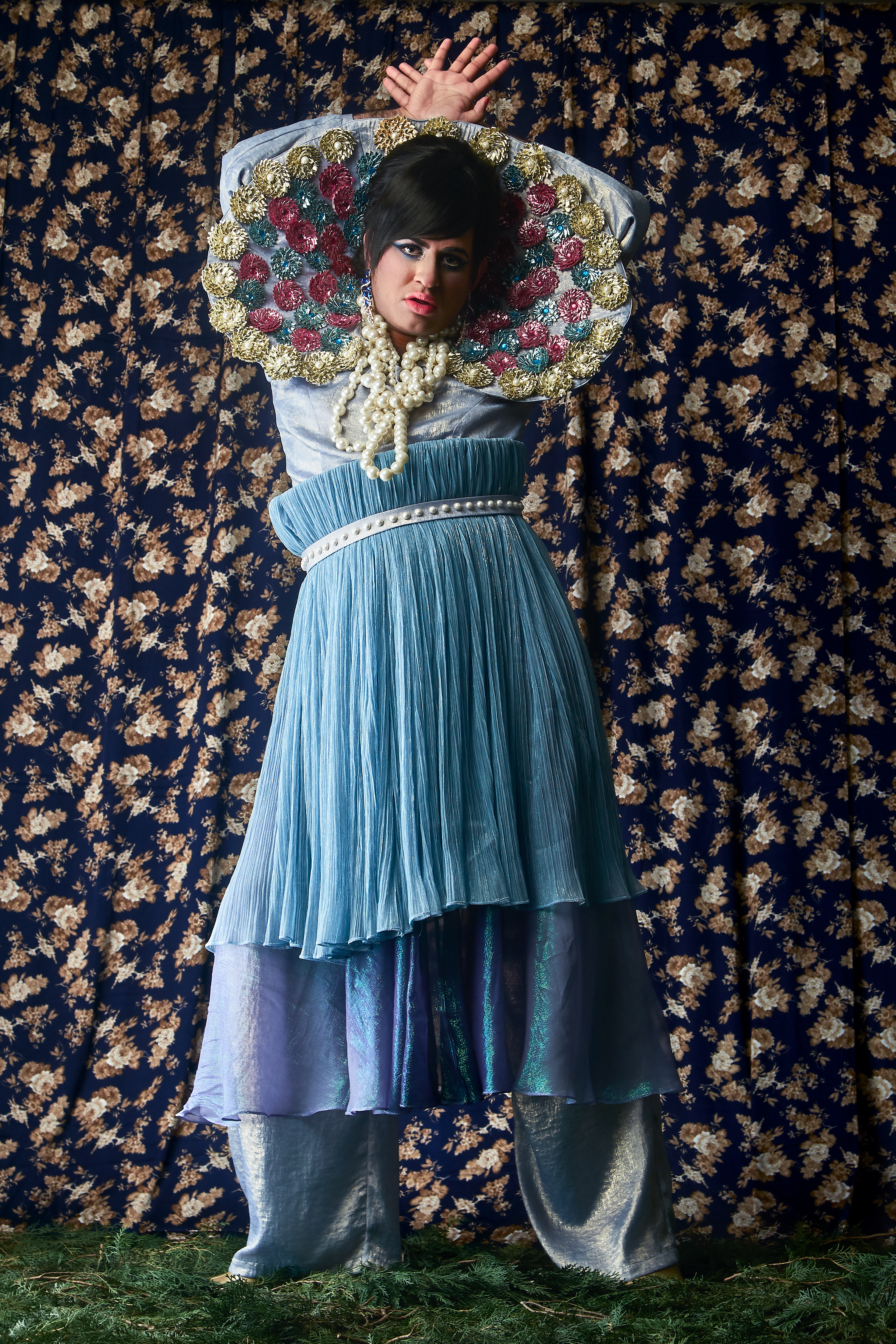 dapperQ:What inspired this collection? What inspires your designs overall?

Alok: In the most practical sense shopping in traditional venues doesn’t really work well for me. Most clothes aren’t designed with my shape in mind – as in, my shoulders are too wide, my arms don’t fit, I don’t have breasts or curves in the right places, etc. When designers are making dresses they are not usually thinking about people like me. Besides – when I go to try on those dresses, I am often harassed in the stores and dressing rooms, such that the very experience of shopping becomes traumatic unto itself. My job – performance – requires me to constantly be pulling a look. I needed fresh outfits — so designing just seemed like a natural conclusion.

I’ve always believed in the power of images to touch and shape the world. As an artist I’m always thinking about how to use my body, my voice, my being as a canvas to create a scene that will stick with people even after I’m gone. An infinite permanence that will linger, despite every attempt at my disappearance. Clothing became an ideal vehicle to hold all of this. That’s what I love about style versus fashion. We forget fast fashion, but true style sticks with us forever. I wanted to design looks that would leave an impact forever, that would encapsulate the poetry that I was writing, the ideas I was thinking, the conversations that I was having – that would do justice to the life that I was living. An imprint of all of that. I guess what I’m saying is fashion design is the materialization of the life that I am living.

dapperQ: What is your design process?

Alok: It’s about cultivating porousness in oneself. Everything and I mean everything is design research. To be an artist is to be a social scientist with a rigorous methodology that appreciates every encounter as ethnography, every interaction as replete with meaning, every being as a universe. I just cultivate receptivity such that when I create I know that I am a conduit – I am channeling so many of the things that I am and the thingsAl that I love.

In the beginning of my art practice I had more of a firm allegiance between the conceptual boundaries between ‘words’ and ‘textiles’ and ‘movements,’ but now it kind of all blurs together. Feelings govern me. And I submit to them. I listen to rage and it takes me to a shoe, a stage, a sermon, and back again. And it’s dangerous work to feel – especially as a femme who is already always dismissed as hyper-emotional and unreasonable. But I try, the best that I can, to live my creative life unfiltered by other peoples’ projections and whims. Which goes to say, I try to flesh-out my inward longings, my pain, and my fantasy in my designs. They are so personal to me because in some sense, they are me. 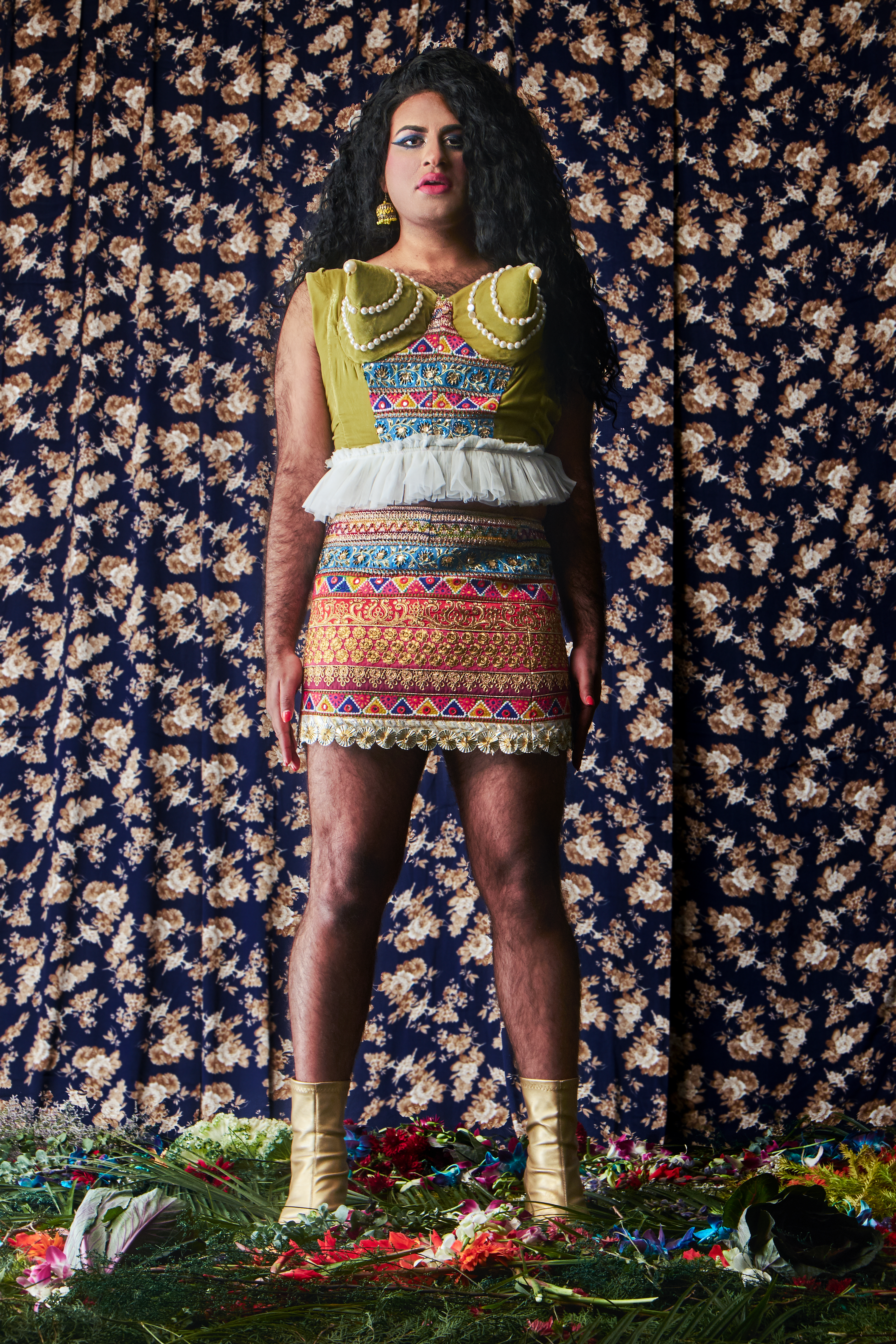 dapperQ: Both mainstream and queer fashion often proffer masculinity is as the gold standard example of queer style. Femme fashion is often erased from the queer fashion conversation, and even androgyny is mostly presented as devoid of any femininity. Why do you think this is? How do your collections challenge this and put femmes to the front?

Alok: The turning point from thinking about designing to just doing it really came when I started to see what the mainstream fashion world was marketing as “gender neutral fashion.” I was irritated by how so much of what was being celebrated as the “gender neutral turn” defaulted into masculinity, drab colors, and whiteness. When all of the glitter settles queerness with all of its rhetorical flourish has yet to challenge the deep and ingrained (trans)misogyny that continues to structure so much of our political and social imagination. There is really no hot take to this conversation: it feels like a new iteration of the same old misogyny. This world just hates femininity so much, detests it. And it especially hates anyone who has the audacity to celebrate it unabashedly, without restraint or apology.

The undoing of this is going to take so much sustained effort. With this collection what I’m hoping to do, in particular, is challenge how the rhetoric of artifice is another home where patriarchy lives. This divide we make between “real” and “artificial” is a patriarchal ruse. Everything is constructed (and that is okay!) Rather than shaming people for being “done up,” we should relish in our mutual constructedness and reject the myth of smooth surfaces. 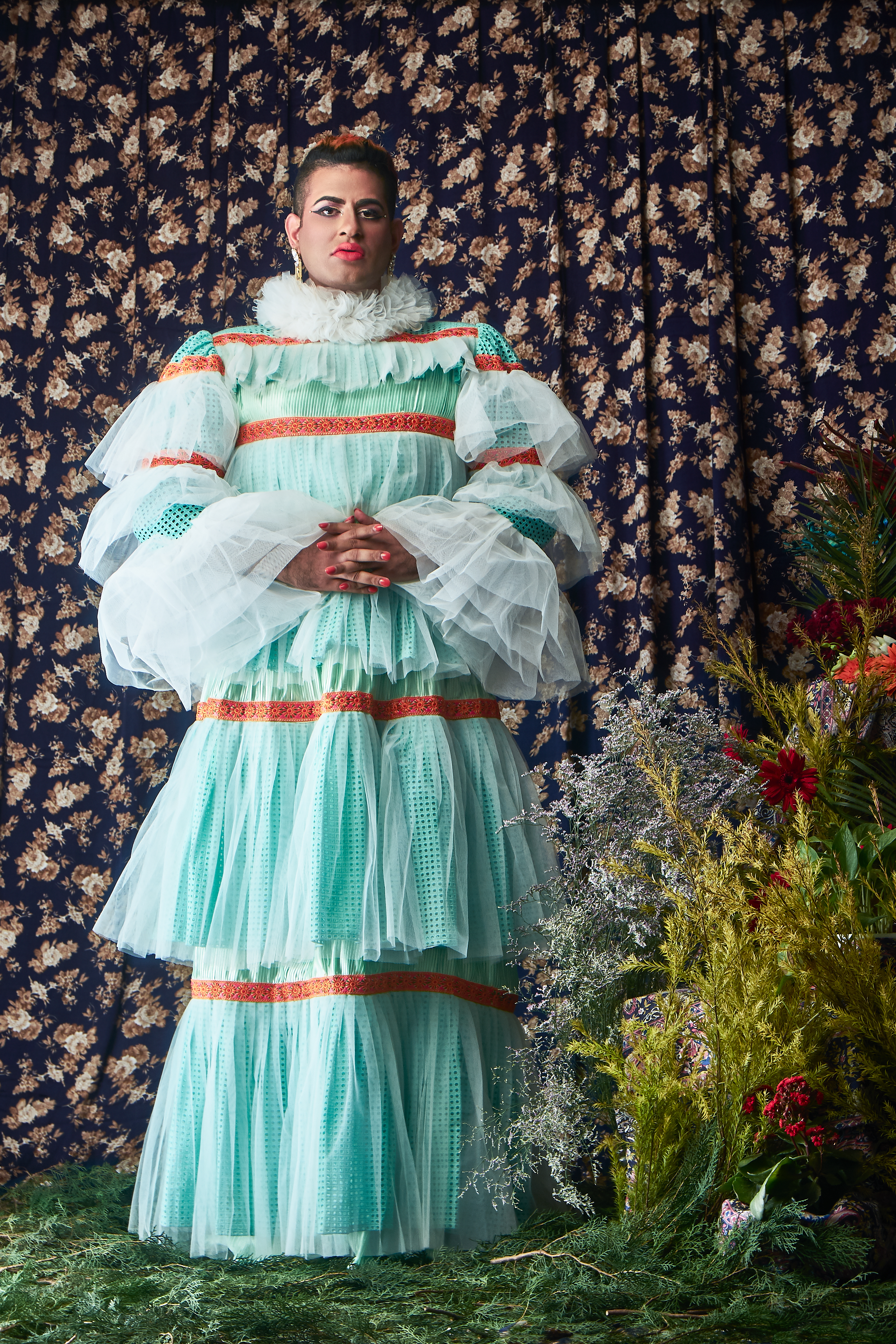 dapperQ: In my conversations with other queers, I have often heard that many in our communities see masculinity as being more radical because femmes lack any real agency to consciously decide to wear lipstick, heels, fake eyelashes, and skirts as a means of communicating power and authority. Their antiquated argument is that we have been indoctrinated to wear these oppressive artifacts and that, try as we might, the meaning behind said artifacts cannot be transcended. What would you say to people who believe that femme style is just a relic of the patriarchy?

Alok: It’s difficult to argue with people who don’t believe that you are a person and fundamentally believe that you are a prop. I understand that sometimes we are in circumstances where we have to do that work, but increasingly I’m recognizing how much it drains and – indeed – destroys me. This is not just about “my politics,” this is about “my personhood.” And the fact that you can’t see that this is about “me” and not “my beliefs,” suggests a chasm that cannot be crossed by mere language alone. I wonder, then, if I am the best person to be having this conversation with you? In instances like this I see a masc person say the same thing I have been saying for the past hour and then the other person is like, “OMG! Great point!” And I’m just like …. “wow.”

So I guess sometimes words don’t work, and it’s about one manicured middle finger, an automated email response, and a commitment to self-preservation. 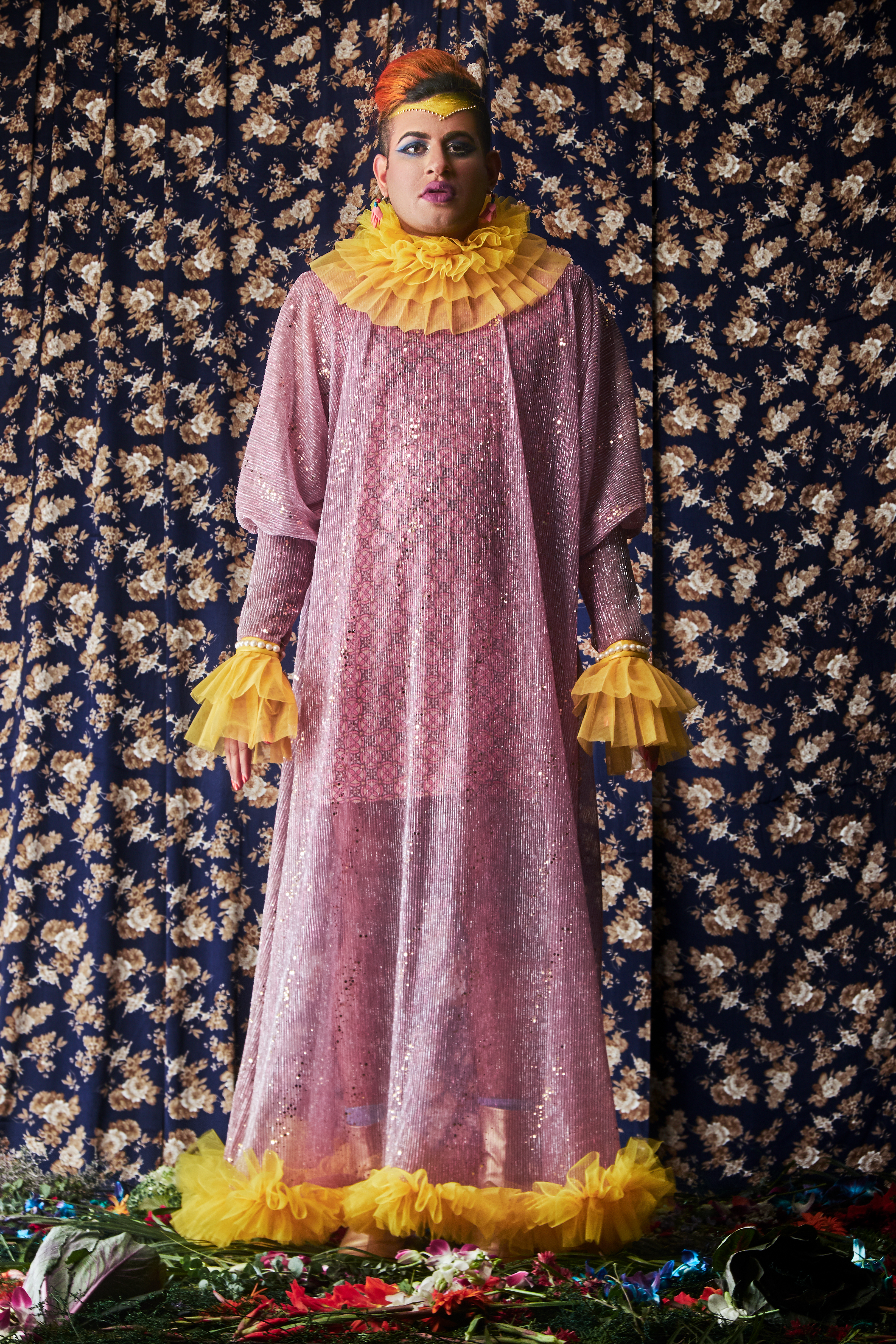 dapperQ: Your collections are absolutely stunning. Do you plan on making them available for purchase and where can readers purchase them?

Alok: Right now the pieces are one-of-a-kind! I hope to make them available in the future but I don’t have capacity or infrastructure at the moment.

dapperQ: Lastly, as you have discussed, fighting for greater visibility comes with risks, because being visibly femme can put people at risk for violence. What do you hope your collections communicate to those who do not want to wear or cannot wear your collections out of safety concerns?

Alok: Yes this is so important. My clothes are not for everyone. I wish that we lived in a world where self-expression wasn’t so rigorously policed. I wish that something so simple as what we wore didn’t have such dire consequences. But we don’t. That’s why I think it’s dangerous to standardize visibility as authenticity. There is no one way to be femme, there is your way to be femme.

Hell – I don’t even look like I do in these photo shoots every day. Some days I can’t even bear the brunt of it all so I wear an easy look and go about my day. That doesn’t make me any less trans, any less femme, any less real, that just makes me a person navigating a complex and profoundly painful world. This pictures and designs are only one incarnation of my femininity, they are not the end-all-be-all of it. Our femininity is multilayered, nuanced, and infinitely involving. It is varied and tremendously different among us. There are as many ways to be as there are us. I hope that we can hold space for the both-and in everyone and everything – that degree of tenderness for one another feels so precious and imperative these days. We are works in progress and we are navigating so much trauma and pain and we have to hold that for ourselves and one another. 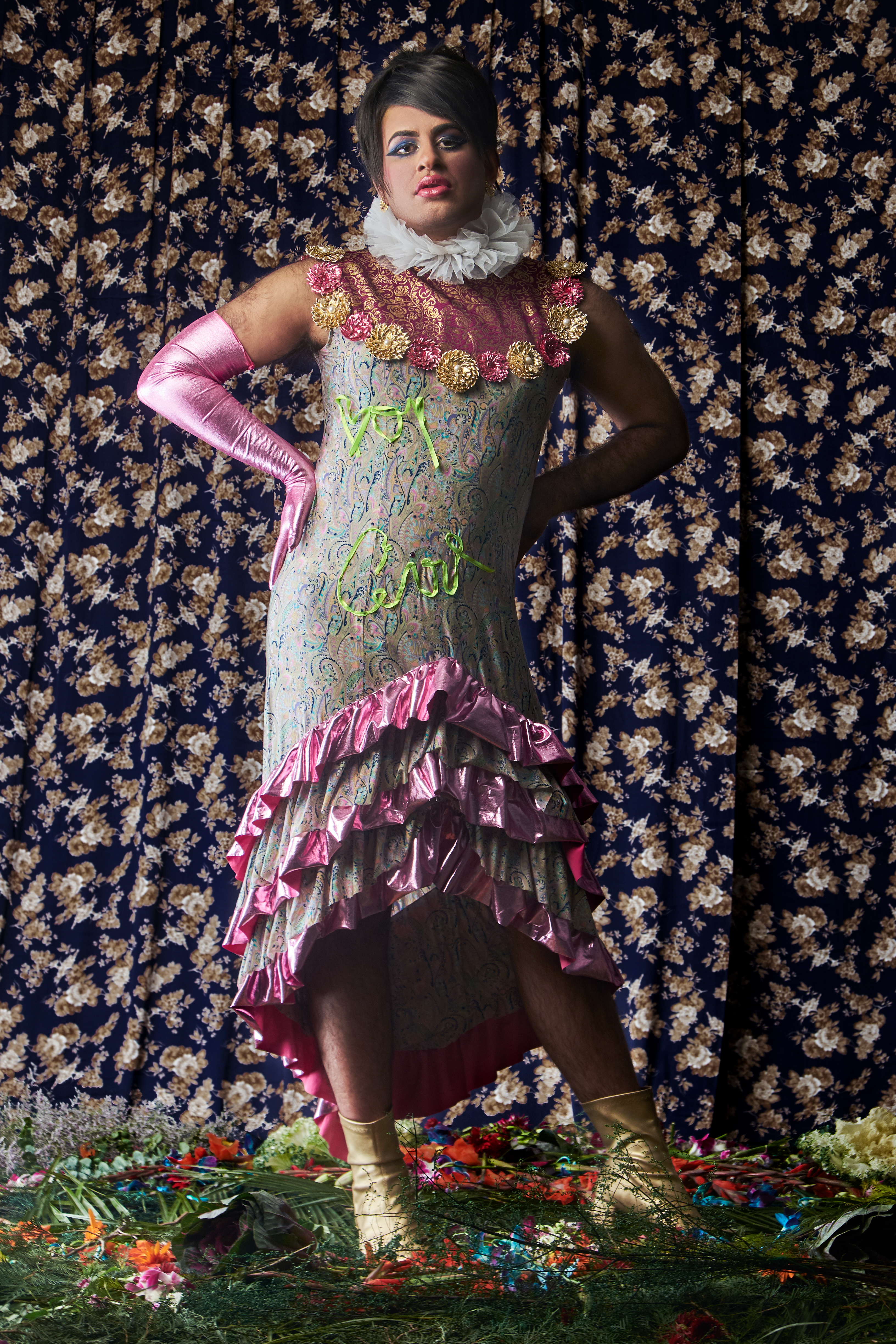 ALOK (@alokvmenon) is a gender non-conforming writer and performance artist. Their eclectic style and poetic challenge to the gender binary have been internationally renowned.