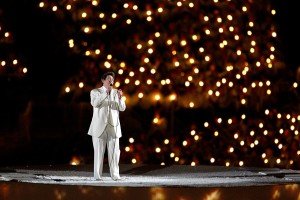 My buddy Danna pegged a pinnical dapperQ moment with KD Lang’s rendition of “Hallelujah” at the Olympic Opening Ceremonies.  While I checking around for it, I saw a fascinating but totally unverifiable comment on About.com’s coverage of the Olympics.  According to someone who goes by “Sierra Dolly”:

“In the United States, k.d. lang’s performance was censored by NBC in a manner that kept her away, as much as possible, from the eyes of American viewers. Compared to how NBC’s camera frequently returned for up close and lingering shots of Sarah McLachlan during her performance, the fact that lang was relegated to predominantly distant shots suggests that homophobia was behind the camera. k.d. lang is not only a gifted and popular singer, but also an out “butch” lesbian who wears ‘mannish’ fashions. What she is and how she presents herself in public did not deter the producers and organizers of the opening ceremony from giving her a prominent role. Yet it was obvious from what Americans got on their television screens that NBC producers did not like what they saw and decided to conceal her homosexual identity as much as possible.”

The attached photo, which is by Robert Gauthier of the Los Angeles Times is sho nuff far the frigg away.  Any chance Sierra Dolly is right?  Anyone got the time to assess comparisons between KD and the equally lovely but more “palatable” Sarah?

Written By
Guest Authors
More from Guest Authors
Since Emma wrote in a few weeks ago for advice on dapperQ...
Read More