*Unless expressly stated otherwise, the findings, interpretations, views, opinions, and conclusions expressed in this interview are strictly those of the author and do not reflect the views of the interviewer, dapperQ, or dapperQ’s community partners.

We may be fashionably late to this party, but what counts is that we arrived looking like Mya’s love—whoa! *simultaneously snaps fingers* I know I’m cheeky.

Which party is this, you ask? This party:

Fashion designer and androgyne extraordinaire, Rick Owens showcased his Spring 2014 line with an army of fierce step dancers. These ladies are an omen for the coming of fashion Jesus – Rick Owens. Hallelujah! He has risen.

Don’t say it. “T, babe, you have bought into the hype.” I know. In my defense, sometimes there is nothing wrong with following the crowd. Growing up in Nigeria, you’ll learn that when you see a crowd of people there is a 50-50 chance that they may save you or kill you. I don’t rebel just for the sake of it. It’s trite.

Rick Owens is just one of those artists and culture producers getting their due. He pushes the envelope, blending contemporary urban styles and high fashion, catwalk outrageousness.

His work is pure fashion, style, and substance.

“Fashion is not something that exists in dress only. Fashion is in the sky, in the street, fashion has to do with ideas, the way we live, what is happening.”

The problem with being around fashionable/stylish, analytic people is that you end up in annoying cyclic philosophical debates about clothes. Take, for instance, this argument:

X: Style is better than fashion. Fashion is all trends, “who wore what better,” and brand names. Fashion is capitalism; it is a competition. Style is personal. It is an expression of your personality, your tastes, and your evolution.

Me: Yes, that’s true; but they are not mutually exclusive. Style feeds fashion and fashion feeds style. People do not develop their style in a vacuum. They are often aware of and influenced negatively or positively by these trends and brands.

The argument usually goes on and on. In its repetition, it sounds like a chorus from a choir of pretentious scholars who took the “which came first, chicken or egg?” dilemma too seriously. No one can answer that. Even Coco Chanel contradicted herself. This is why I believe most in substance—essence.

Fashion and style are kindred souls when they are appreciated for their substance. This is the skeletal matter that lives beneath the superficial, skin-deep division of fashion and style. Of course, there are people who would wear Versace from their briefs out to their coats, but that doesn’t matter. Substance sees fashion and style in their deepest, spiritual form where there is full appreciation for creativity, genius, and evolution. Substance permits subjects to create the story they aim to tell with their clothes. “What does it say? What is the essence? What does that outfit mean to you?” That is the focus. If you can’t say anything other than, “I saw it on Hottie McModel,” then that would be your cotton-picking problem. That would mean that you might have not attained that height of consciousness that allows you to look within yourself for direction.

This leads back to Mr. Owens. Why do I think his work has substance? Simple. I have an idea of the story he is trying to tell and I welcome it. Although there has been criticism from people of colour about Owens fetishizing race, it’s hard to deny the chills most people had from that legion of baddies. Contextualizing the race and culture of the model, it is going to (and HAS to) be hard for (“passing”) white cultural producers to portray black people in their work. That being noted, this cross-racial portrayal can be done right. INDEED.

After reading and re-reading bell hook’s Eating the Other, in my last gender studies class before graduation, I had to re-assess the concept of cultural appropriation in comparison to its more ethical cousin, cultural hybridization. As a woman from southern Nigeria, where Victorian men’s night dresses were remodeled (during colonization) by my ancestors in a stylish manner to become our traditional clothing, I am painfully aware of hybridization and power dynamics. I still can’t say how culture hybridization can be done “right” given racial power structures. But, cultural producers who acknowledge and question this power structure are headed the right way.

Mr.Owens, clearly acknowledged and questioned this power structure, by bombarding viewers with a high fashion stage OWNED by predominantly black women, who refused to perpetuate hegemonic standards of beauty. Yes, it would have been better to see the models rocking the clothes, without the forced edginess, looking as graceful and “beautiful” as other high fashion models. But, maybe we needed to see people mess up the entire system. Owen’s show was not perfect. There are numerous debatable aspects about the show, but it was nothing short of spectacular. 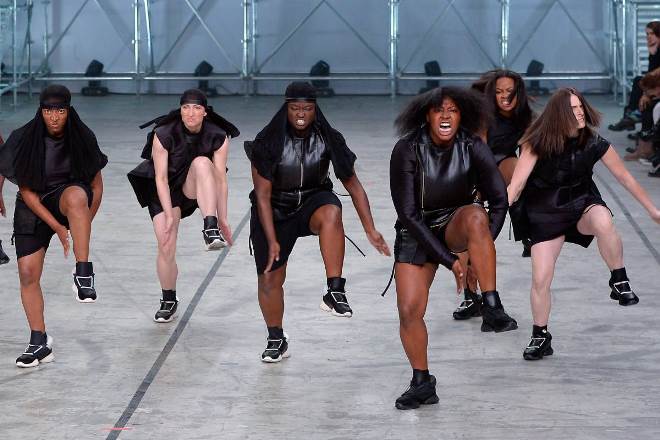 Written By
T'kay
More from T'kay
Zanele Muholi: Isibonelo/Evidence, the most comprehensive museum exhibition to date in the...
Read More