“‘Stylin’ out.’ That’s how Monica L. Miller, an associate professor of English at Barnard College, describes the way black

people have used dress to expand definitions of blackness, gender, and sexuality. Men in particular have “styled their way from slaves to dignified human beings,” she writes in Slaves to Fashion (Duke University Press, 2009).

The first book-length study of black dandyism, Miller’s work is part of a growing scholarly interest in how clothes fashion our lives. It also signals the blossoming of black dandyism—fedoras, silk ascots, flashy socks—on the streets of major cities. Jay-Z, Kanye West, and Outkast’s Andre 3000 have made it cool to rap in Polo shirts, bow ties, nerd glasses, and boat shoes. The NBA’s LeBron James, Dwyane Wade, and Kevin Durant pull off dandyish without being pretentious. And now black dandyism is trending in the halls of academe.” – Stacy Patton via Black Dandies Fashion New Academic Identities.

In our newest installment of “Dress Smart,” we’re showcasing the dapper stylings of Robin Dembroff, a 25-year-old PhD candidate in Philosophy at Princeton University. Here’s what Robin had to say about academia, philosophy, and fashion. 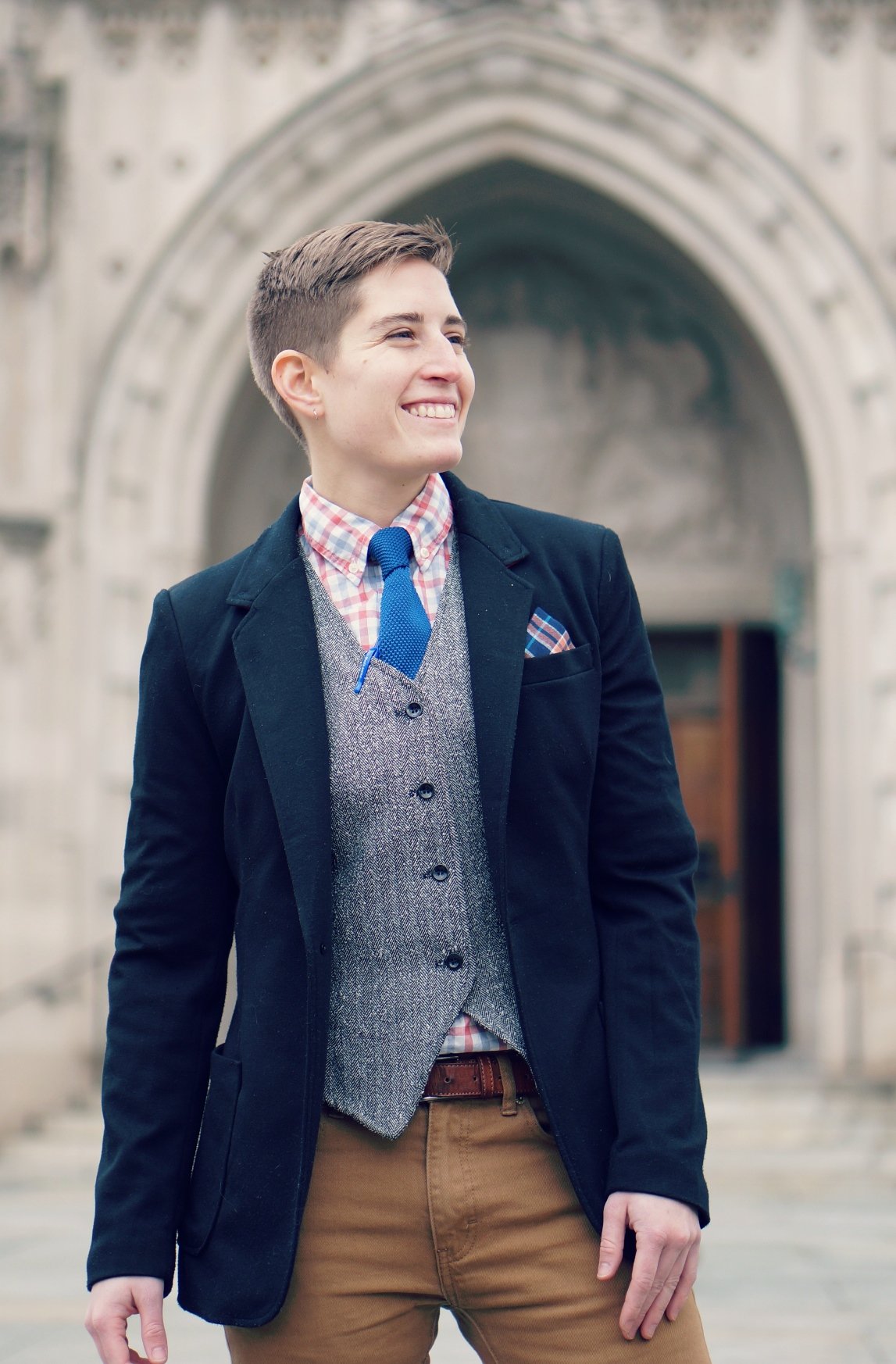 Robin Dembroff: Let’s start with easy. My name is Robin Dembroff0. I identify as genderqueer, and I prefer the pronouns they/them/their, though I make a conscious effort to be patient about this. (Changing language patterns is hard!) That doesn’t mean I won’t make a horrid face at anyone who complains that gender-neutral pronouns are ‘ungrammatical’. I will.

My dissertation is on ‘social metaphysics’ – basically, this means I write about the nature of social categories. (Though I care a lot about many other philosophical issues!) When not teaching or tackling the Sisyphean task of responding to email, I’m often thinking about what we are picking out in the world when we use words such as ‘woman’, ‘black’, ‘homosexual’, and ‘disabled’. Alternatively, I could be thinking about how we – you, me, those around us – can bring new things into existence through our collective attitudes and beliefs. Take, for example, money. Pieces of paper are not money (i.e., units of exchange) all on their own! They become money because we together agree to treat them like money. This is completely bizarre, if you think about it long enough (and I do). 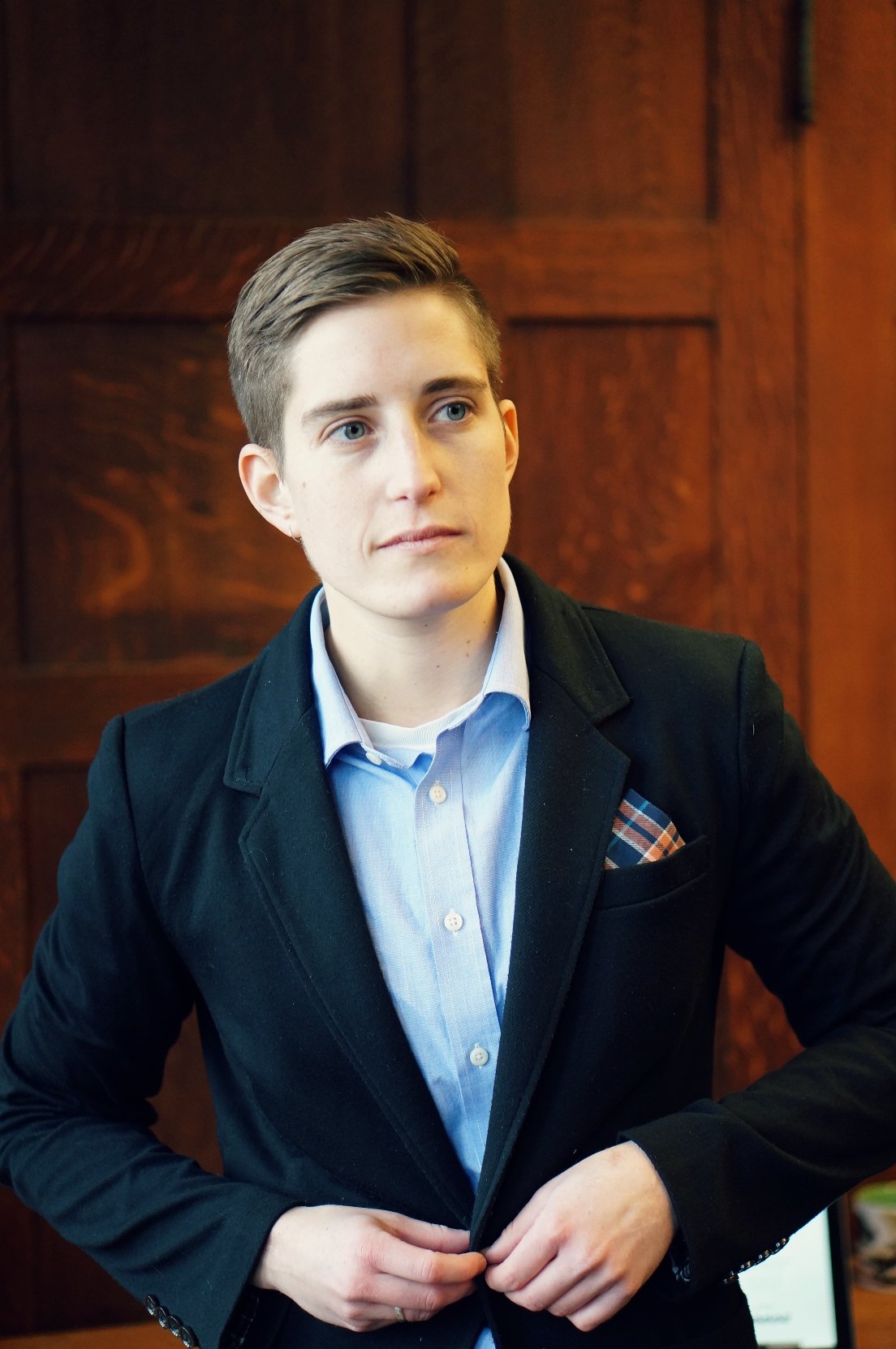 Within the small world of social metaphysics, I have the pleasure of knowing some incredible human beings, such as Sally Haslanger, Elizabeth Barnes, Esa Diaz-Leon, and Ásta Sveinsdóttir, among others. As faculty, they exemplify how to balance being a careful thinker and charitable reader with being a goddamn-intellectual-force-of-nature against a patriarchal world. I hope to set a similar example for my own students someday. (The conservatives might say this means I hope to corrupt the youth. I happily accept this as putting me in good company with Socrates.)

Enough about philosophy! Let’s move on to the fun and hard stuff.

Dapper clothes are a fairly recent discovery for me. Well, except when baby Robin put on their dad’s suit jackets and jammed on the bugle. (Yes, my parents were surprised when I came out. No, I don’t understand it either. But I love them anyway.) 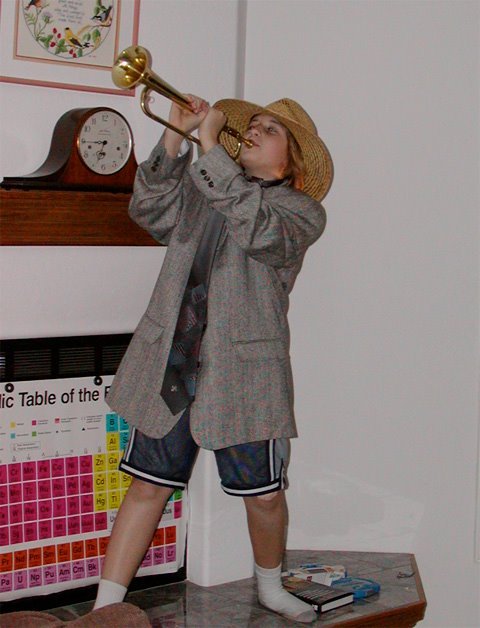 Growing up, I got crew cuts – except the traumatic Summer of Bowl Cuts – wore boys’ clothes, and played sports with boys. Everyone thought I was a boy, which I’m sure caused my poor mother never-ending embarrassment. Even so, because I grew up in a pretty conservative and religious household. My community (including myself) assumed I was a cisgender woman and would end up marrying a cisgender boy. Needless to say, I was a pretty confused and conflicted kid. When I came out/was outed in 2012, I had just moved to Indiana to start my PhD at Notre Dame. I knew no one and had nothing to lose. So I started wearing ties and immersing myself in internet queer culture (including dapperQ). When I looked at my reflection, I finally recognized myself. 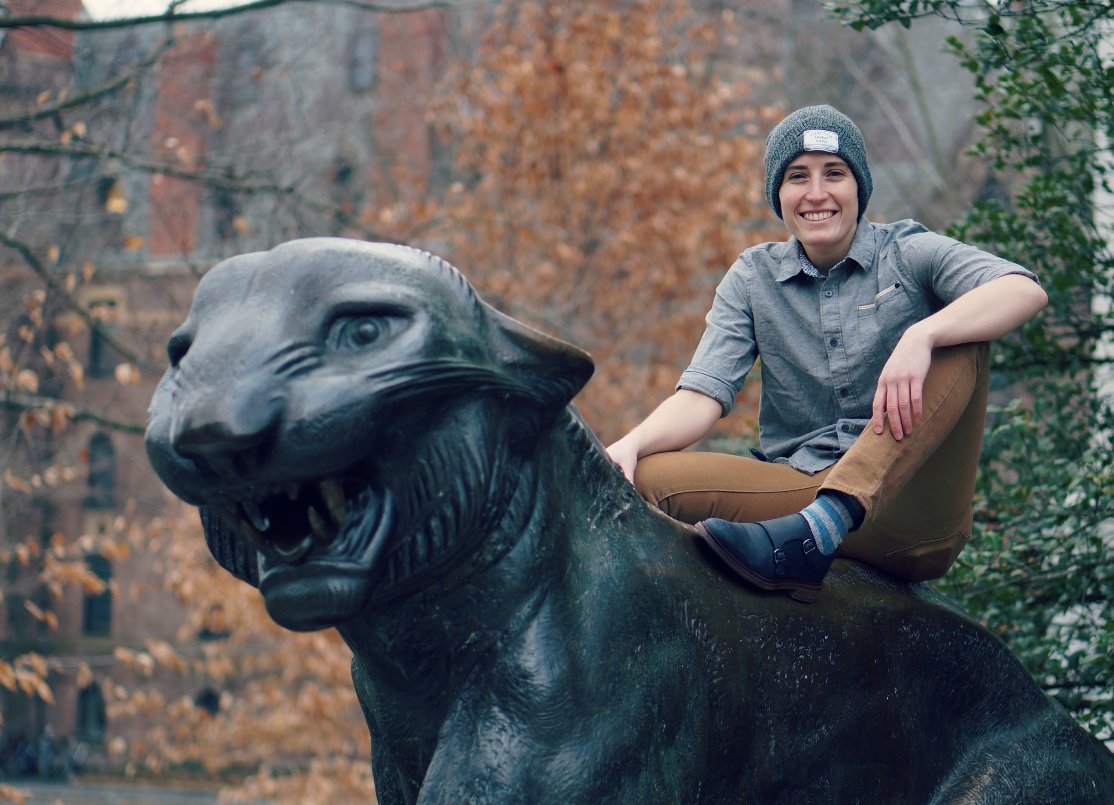 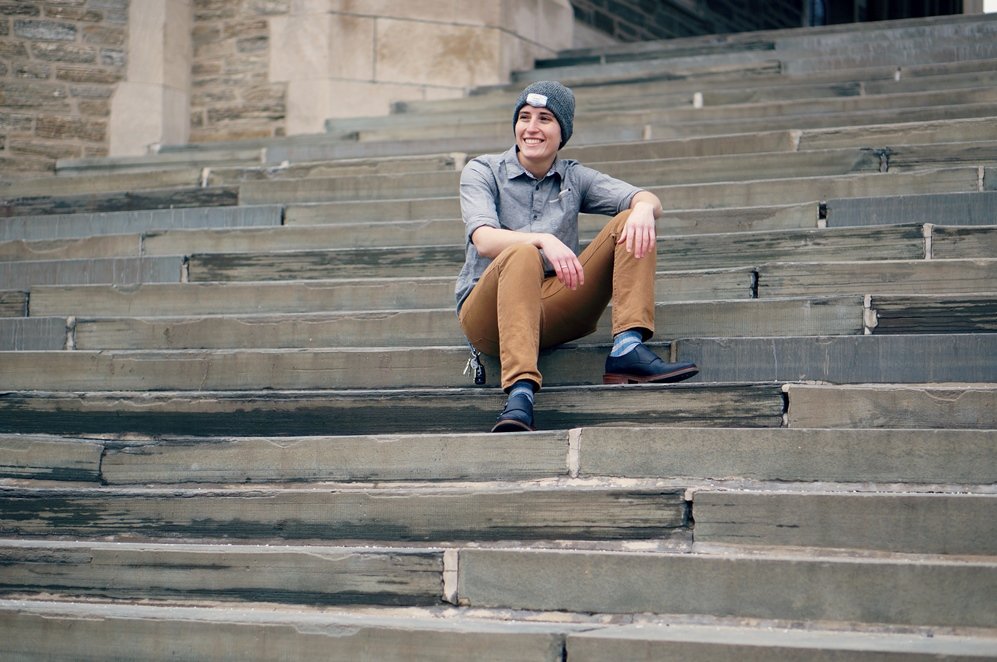 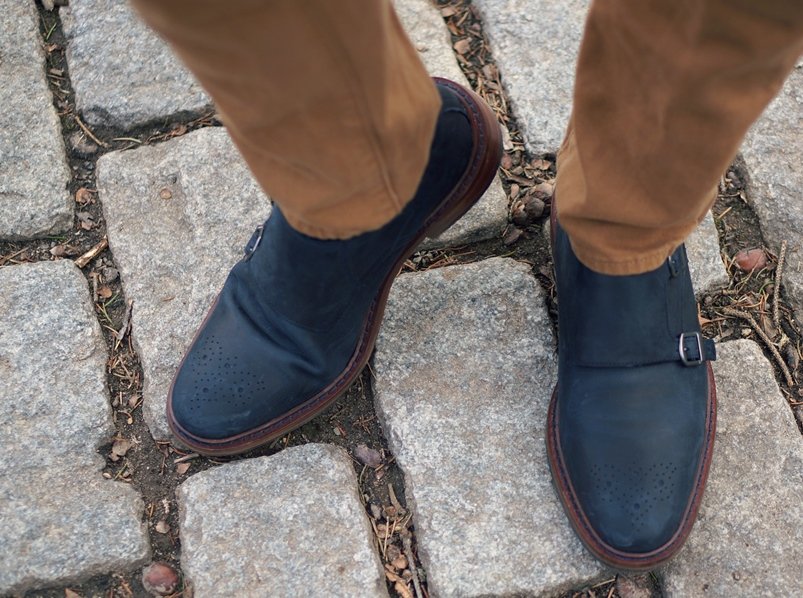 I enjoy dapper fashion as a hobby, as self-expression, and as a political statement. I loathed clothes shopping until the tension between what I wanted to wear and what I thought I ‘should’ wear was gone. Now, I can spend a whole day in Nordstrom Rack, even though I can’t afford 99% of the things I try on. Clothes used to be a source of either guilt or humiliation for me; now, they are a way of communicating my queerness and masculinity on my own terms.

That said (and here’s the hard part), I have a complicated relationship with my style. I love the clothes I wear; I feel five inches taller and five times as confident when I put on a crisp shirt and tie, lace up my Cole Haans, and go teach philosophy to Princeton undergrads. Through color and line, clothes now express my personality and further my goal of cultural resistance. But, and of course I can only speak for myself here, I do not like everything about who I am.

Recently, I have had to think hard about queer misogyny. Even worse, I’ve had to confront it in myself. Like many of us, I grew up absorbing associations between femininity and meekness, physical weakness, ‘irrational’ emotion, and so on. With these associations came an aversion to embracing my internal femininity, externalizing femininity, or sexual attraction to femininity. Now, I’m not claiming that these features are completely due to our misogynistic culture – it’s possible that I would have them in a world with total gender equality. But I kind of doubt it. Or, at least, I doubt I would have these features to the degree that I do. And that’s a hard conclusion to face; I suspect I’m not the only one waking up one day to find these zits in the proverbial mirror. 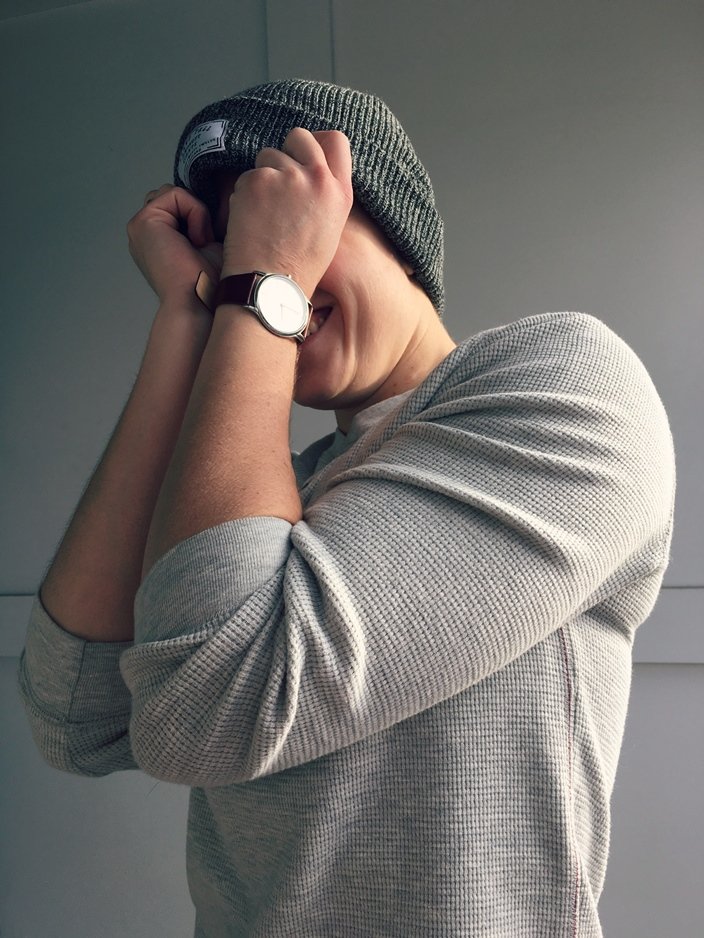 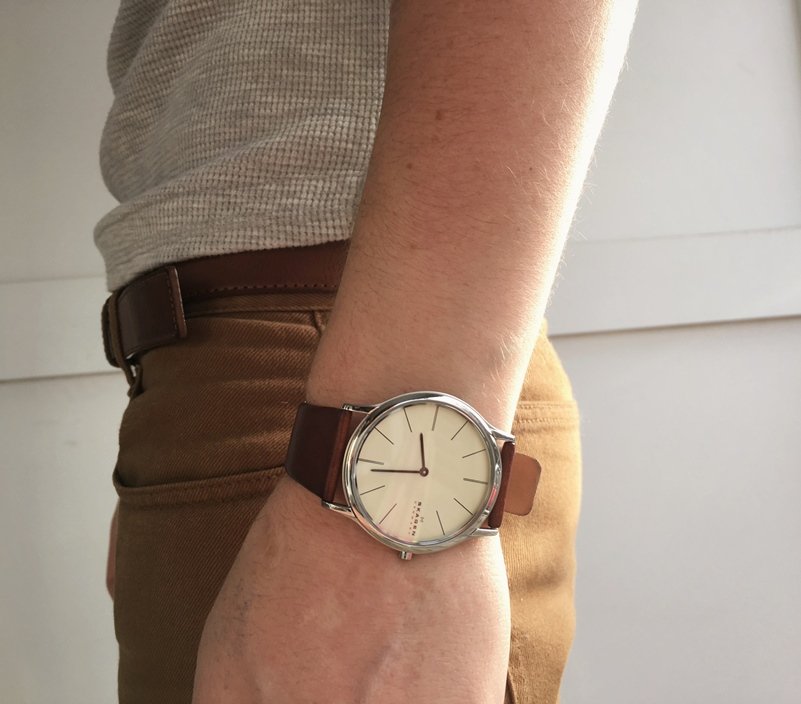 It’s difficult to know what to do with this realization – and dapperQ provides a great forum for thinking hard and together about it. Of course we should celebrate dapper culture. Of course we should embrace andro, butch, and transmasculine, and we absolutely should throw champagne-drenched parties when Saint Harridan releases a new fashion line. But we also need to remember, as Ryn Hodes writes, that “respect, value, validation of femaleness and femininity is a huge unfinished task.” While celebrating dapper – it is phenomenal, after all – let’s not forget also to celebrate femininity [and dapper femmes]. Only together will our queer spaces truly be a smorgasbord of color, personality, and cultural resistance.

Written By
dapperQ Team
More from dapperQ Team
In July 2013, dapperQ published our first ever list of 100 Most...
Read More