Produced by Wolfpack Productions, LLC, PLEZZURE ISLAND, the first and only queer women’s resort takeover in Texas, is slated to take place at the Hilton Island Galveston Resort from September 29 – October 2, 2016. The highly anticipated Galveston, TX event promises to deliver a star-studded, multi-sensory experience that is diverse, welcoming, and inclusive. Weekend events include daily pool parties with DJs and Go-Go dancers. But of course, the dapperQ staff is extremely excited about the Friday night sexy PJ party that immediately commences after an amazing show called BedPost Confessions, which consists of seductive performances and sexy secrets revealed on stage. (I mean, you’re all going to have to post up images of your silk robes and velvet slippers.) Jenny Block (author/writer featured in Playboy) will be a special guest featured performer during BedPost Confessions. 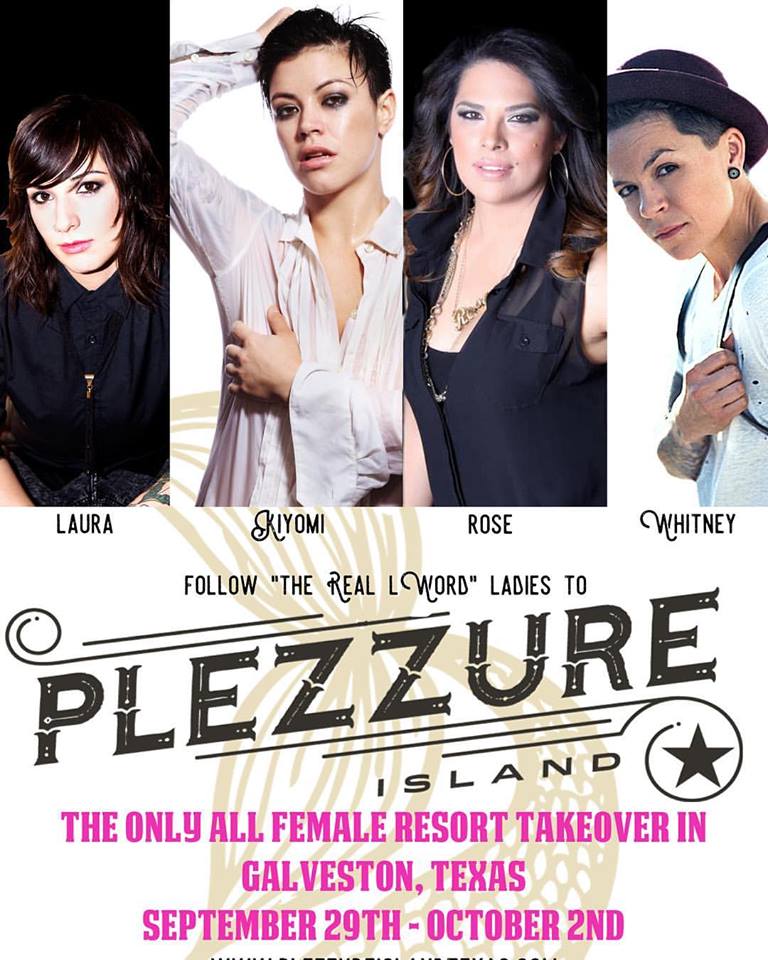 Plezzure Island DJs include top Texas talent such as DJ ATHENZ, STETRA, DJ GirlFriend, DJ Sno White, DJ Rocabye, DJ Kayla Kruz, and their headliner from Miami, DJ Citizen Jane. There will be a DJ BATTLE on Saturday October 1st by the pool featuring DJ KFresh from Houston, DJ GiiQ from Austin, and DJ.2AM from Las Vegas. Saturday night features a Hunter Valentine concert, bringing the New York rock vibe. Sunday, attendees are invited to hit the beach for a day of fun in the sun with a solo set by Kiyomi of Hunter Valentine and additional live performances and local DJs.

Power couple Plezzure Island founders, Kelly Frances West (Austinite) and Michelle Solórzano Daly (Washington, D.C. native), AKA The Lesbutante & The Boss, are not only astute entrepreneurs; They are also known for being style royalty in the ATX. Michelle, a 38-year-old Purple Heart Army Veteran who spent 10 years in the military was medically retired after suffering injuries during a deployment to Iraq. She moved to Austin during the summer of 2012 for a new start after recovering from her injuries. A year later, she met Kelly through mutual friends. Kelly had just returned to her native Austin home after having been gone for 10 years. Kelly had been working as a wedding and event designer for the last 20 years. Shortly thereafter, the two decided to start a lesbian happy hour when the remaining lesbian bars in Austin had closed down and it was becoming impossible to meet quality women without using the Internet. The first happy hour in December of 2013 started out with a bang, drawing in an attendance of 125 women who found out about the event just by word of mouth and a Facebook invite. This is how Lesbutante & The Boss was born. Today, the duo hosts a large ladies night every second Friday at Austin’s newest premiere LGBTQ nightclub, Highland Lounge. Lesbutante & The Boss fill the club with 400-500 women every month. Their monthly events are free because they want to grant full access to the community.

dapperQ recently interviewed Kelly and Michelle to find out what inspires the couple’s work and also get the inside scoop about Plezzure Island and the couple’s coveted style. 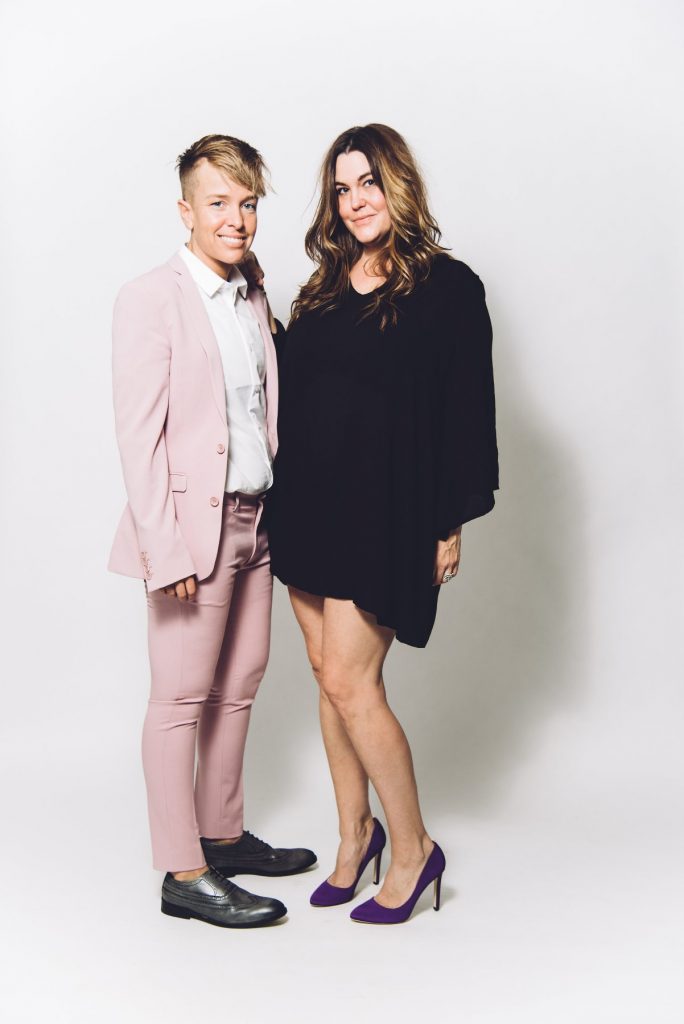 dapperQ: What is Plezzure Island?

Lesbutante & The Boss: Plezzure Island is the only all female resort takeover in Texas. It is a 4-day lesbian/woman centered, trans inclusive event that includes pool parties, beach party, nighttime entertainment, DJs from all around the country, and all different types of lesbian celebrities from The Real L Word, L Word MS: Hate The Sin, celebrity lesbian DJs, writers, authors, and comedians.

dapperQ: Who makes up the Plezzure Island team?

Lesbutante & The Boss: The team consists of Michelle Solórzano Daly, Kelly West, Gabby Ayala, and Ashley Marshall (AKA The Wolfpack). Gabby and Ashley, our two best friends, partnered with us once the Plezzure Island venture was born. They both bring a wealth of varied experience to the table, such as staff recruiting and logistics management.

dapperQ: What inspired you to create Plezzure Island?

Lesbutante & The Boss: Through the success of Lesbutante & The Boss in Austin, we knew that the greater lesbian community was hungry for quality events. The central part of the United States has a lack of multi-day women focused events. Using large-scale events such as Dinah Shore in Palm Springs and Aqua Girl and Girls In Wonderland in Florida, as inspiration Plezzure Island was born. Our goal was to create a multi-day event that would bring a sense of community to the women in Texas and beyond.

dapperQ: There are queer-women’s festivals and circuit parties in California and Miami. What sets Plezzure Island apart from these other events and how does Galveston, TX stand out as a unique destination?

Lesbutante & The Boss: Texas is one of the largest states in the country and home to some of the most amazing lesbian communities: Austin, Dallas, Houston, and San Antonio, just to name a few. The Hilton Galveston Island Resort in Galveston, Texas is a perfect place for a destination multi-day event because Galveston is built for large-scale conventions and social gatherings.

dapperQ: What can attendees expect to experience at Plezzure Island?

Lesbutante & The Boss: They can expect a strong sense of community, women of all ages and backgrounds, to build new long lasting friends, to find the love of their life or weekend hook up, amazing DJs and live music, parties that create an experience for the attendee, and a safe environment to be yourself.

dapperQ: What are some of Plezzure Island’s keynote performers?

HUNTER VALENTINE – all female rock band based out of Brooklyn, NY and featured on season 3 of The Real L Word.

What are some of the showcased parties and meet-ups at the event?

Friday Daytime: Pool party from 11a-5p with an array of DJs from Texas and other parts of the United States

Saturday Daytime: Pool party from 11a-5p with an array of DJs from Texas and other parts of the United States. An hour of the pool party will consist of a DJ BATTLE between 3 DJs. DJ KFresh from Houston, DJ GiiQ from Austin, and DJ.2AM from Las Vegas. Kia Comedy, a comedian hailing from Atlanta, Georgia, will host this DJ BATTLE.

dapperQ: In addition to being amazing event promoters, your both on point with fashion. How would you describe your personal everyday styles?

Michelle: My personal everyday style changes constantly, just like my hair cut (wink face). There are days where I dress extremely preppy in a bow-tie and suspenders, and other days where I like to rock a tuxedo blazer with a t-shirt underneath, and some ripped up men’s skinny jeans. I love a snapback and have an obsession with all types of shoes, from a great Chelsea boot, to a tasseled loafer, chukka boot, or an oxford. I love to push the boundaries and mix patterns. I love to stand out and have my personal fashion be a topic of conversation. 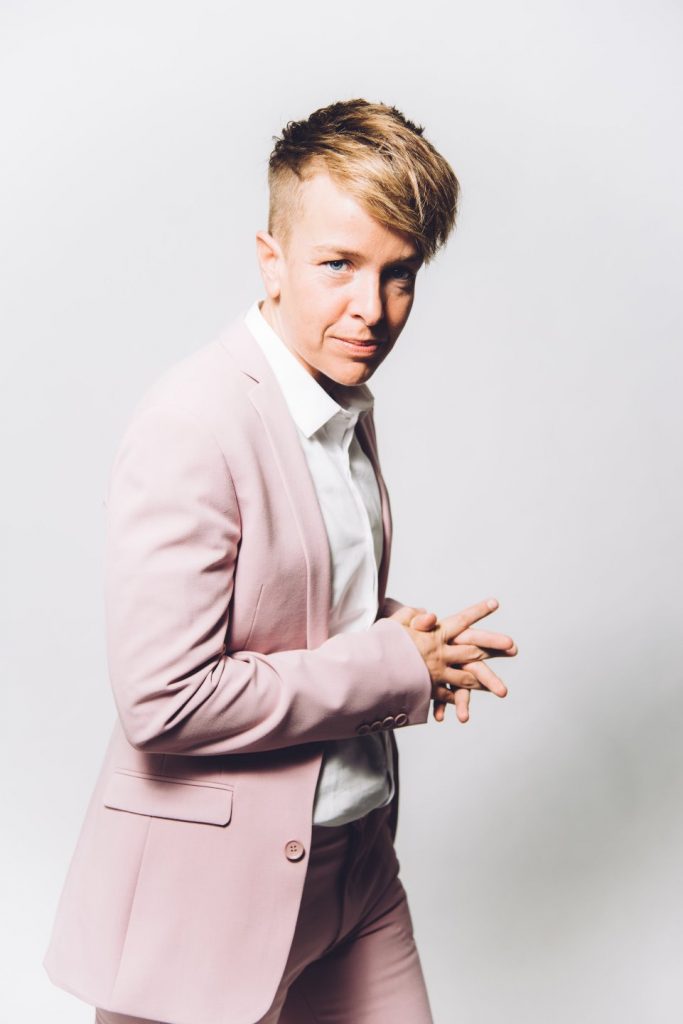 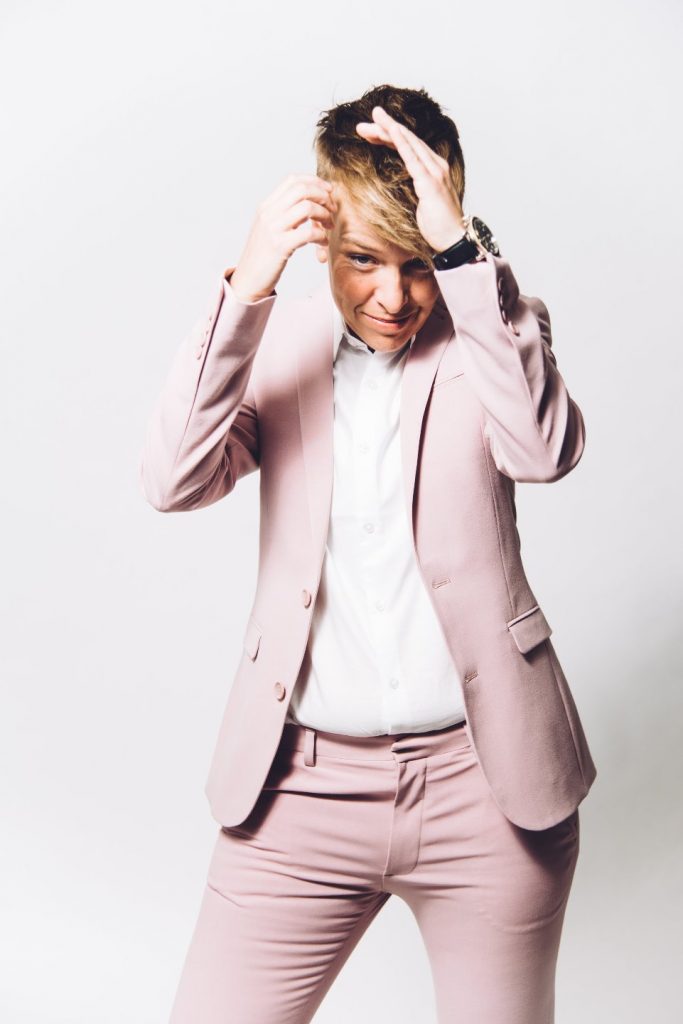 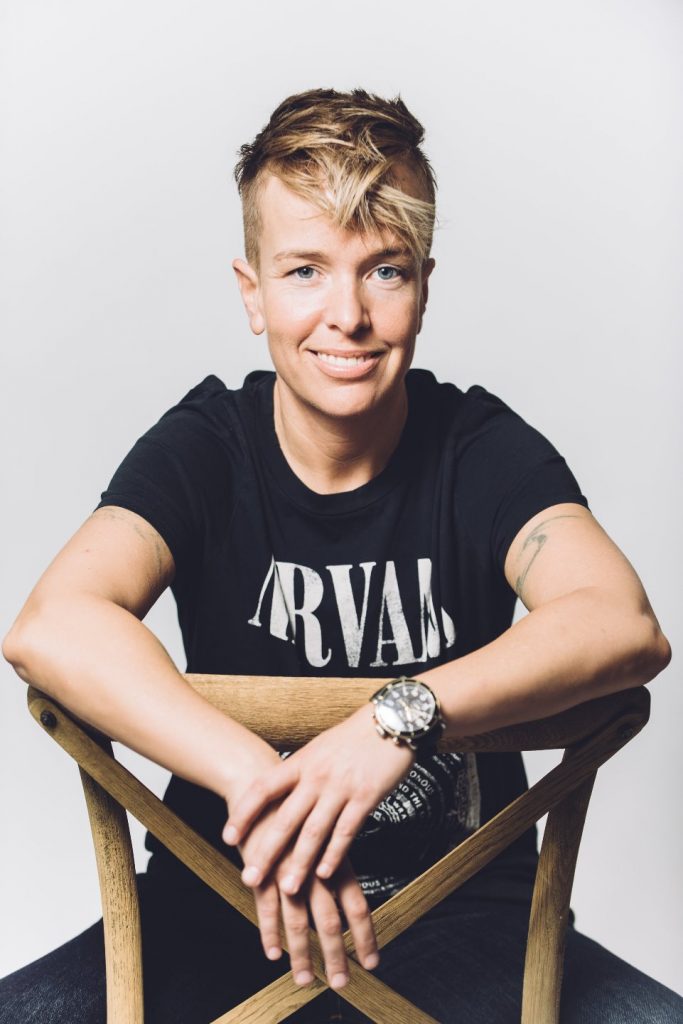 Kelly: My personal everyday style is best known as what I call the SHINY HIPPIE. I love dressing casual with a vintage feel. I dress up my outfits with tons of jewelry that represent nature to include feathers, mala beads, different types of stones and crystals, lots of turquoise, and lots of rings. I love layering in both my clothing and jewelry. You can find me in a short dress from Free People and a pair of slouchy cowboy boots by Frye 90% of the time. 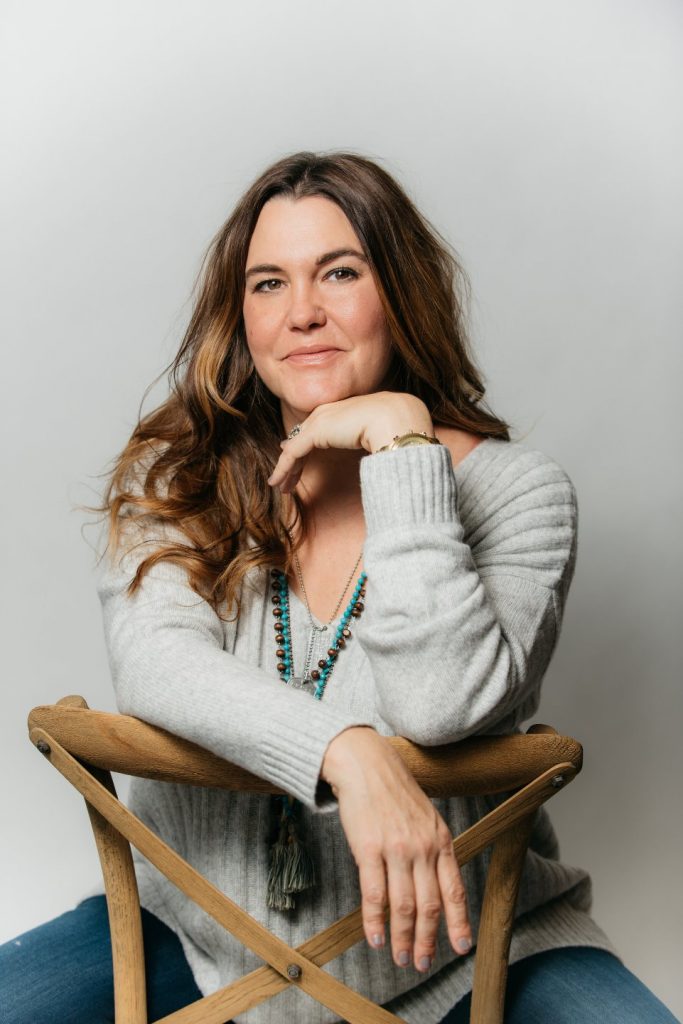 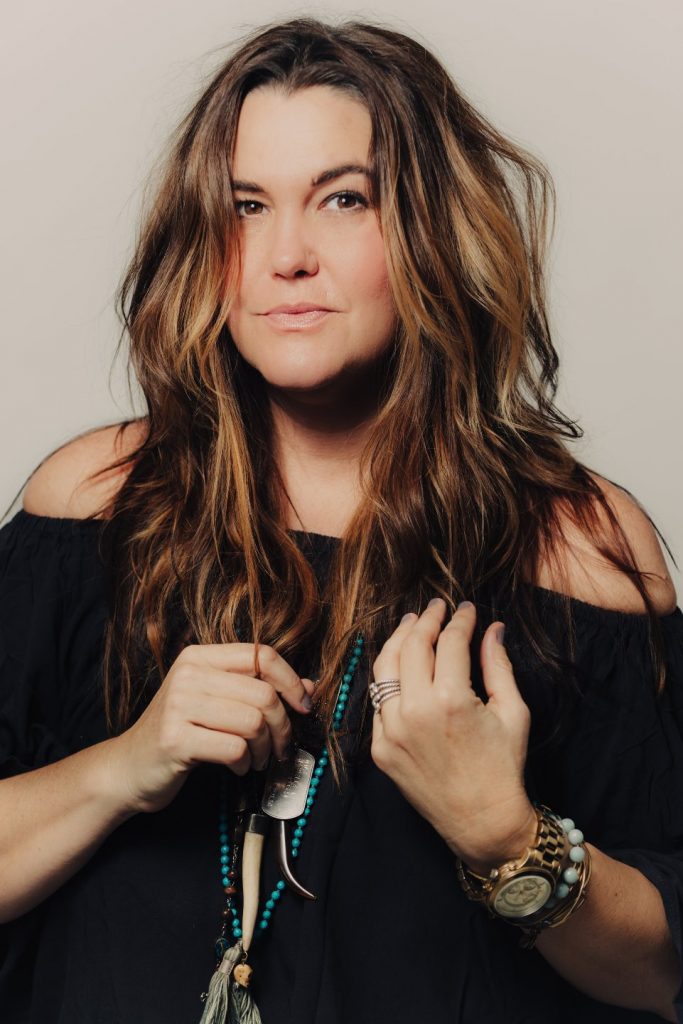 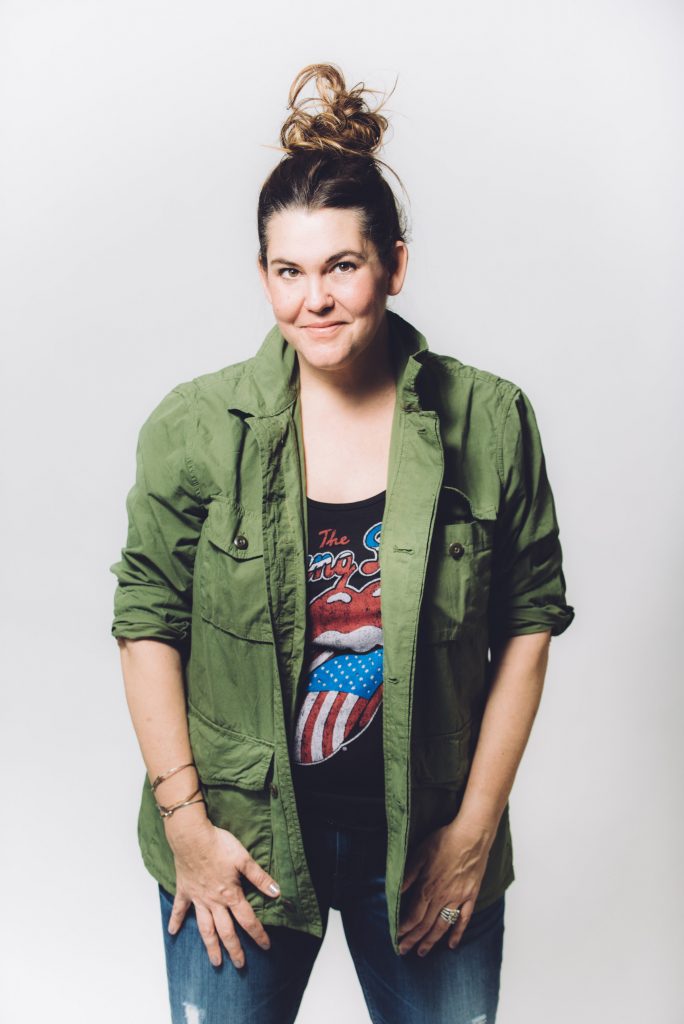 Michelle: My fashion icons are Scott Disick and David Beckham.

Kelly: My fashion icons are Khloe Kardashian because we share the some love for all types of hats. I also love her hairstyles and color. I also love Kate Hudson and Blake Lively.

dapperQ: What fashion advice do you have for Plezzure Island attendees? What should they pack to be prepared for each event?

Lesbutante & The Boss: Galveston is a casual beach community so 2-3 swimsuits considering there are 2 pool parties and a beach party day. Pack a pair of sexy PJs for Friday night’s pajama party. An edgy concert outfit like a cool tank top and some ripped up jeans to see Hunter Valentine on Saturday evening. Flip flops, dancing shoes, t-shirts, tank tops, cut-off jean shorts, ball caps, and a great attitude for everything else.

CONTEST: Plezzure Island is giving away 2 General Admission weekend passes for the first all-female, trans-inclusive resort take over in Texas. A General Admission weekend pass includes all events Friday through Sunday (September 30 – October 2, 2016) and is valued at $200. Plezzure Island will be held at the Hilton Galveston Island Resort in Galveston, Texas. To enter, simply comment below stating which artist and/or party you are most excited to see at the event no later than August 30, 2016, 11:59PM EST. (This contest is run by Plezzure Island.)

To book your hotel & purchase tickets please visit www.plezzureislandtexas.com. If you are flying from out of town it is recommended to fly into Houston Hobby Airport and take a shuttle/cab/uber to the hotel. For any other questions regarding the 4 day event, please email [email protected]