Kara and Genevieve are a Boston-based couple who met online and ironically fell in love through the mile-thick boundaries of the dreaded “friend zone.” Over their first drink, they quickly realized how different they were: Genevieve is an engineer, and Kara is a home birth midwife and doula. Sparks flew in one direction, but were not immediately reciprocated. Thus, they went their separate ways, until bumping into each other at “queeraoke” in Boston.

The organic, real world encounter turned the tables. Kara was now interested, after having seen Genevieve in her natural habitat. Ever stubborn, Genevieve quickly went to work constructing a heavily guarded friend zone, and they started hanging out and getting to know each other over time. Their first “friend date” was making sweet tamales. Genevieve had picked the recipe, which called for chilling the dough for 24 hours. She still insists to this day that she wasn’t plotting for a sleep-over with that “overlooked” detail. They settled on a six hour chilling time and the final product was amazing nonetheless! That six hours provided plenty of time to drink bourbon barrel-aged beers, and to surreptitiously check each other out while playing darts in Kara’s living room.

Long story short, the pair fell madly in love just before Genevieve left for a 10 week cross-country cycling trip. The distance so early on in their relationship was quite challenging, but they picked up right where they left off when she returned. They moved in together after a year, and Genevieve proposed six months later during their road trip vacation in the Pacific Northwest. 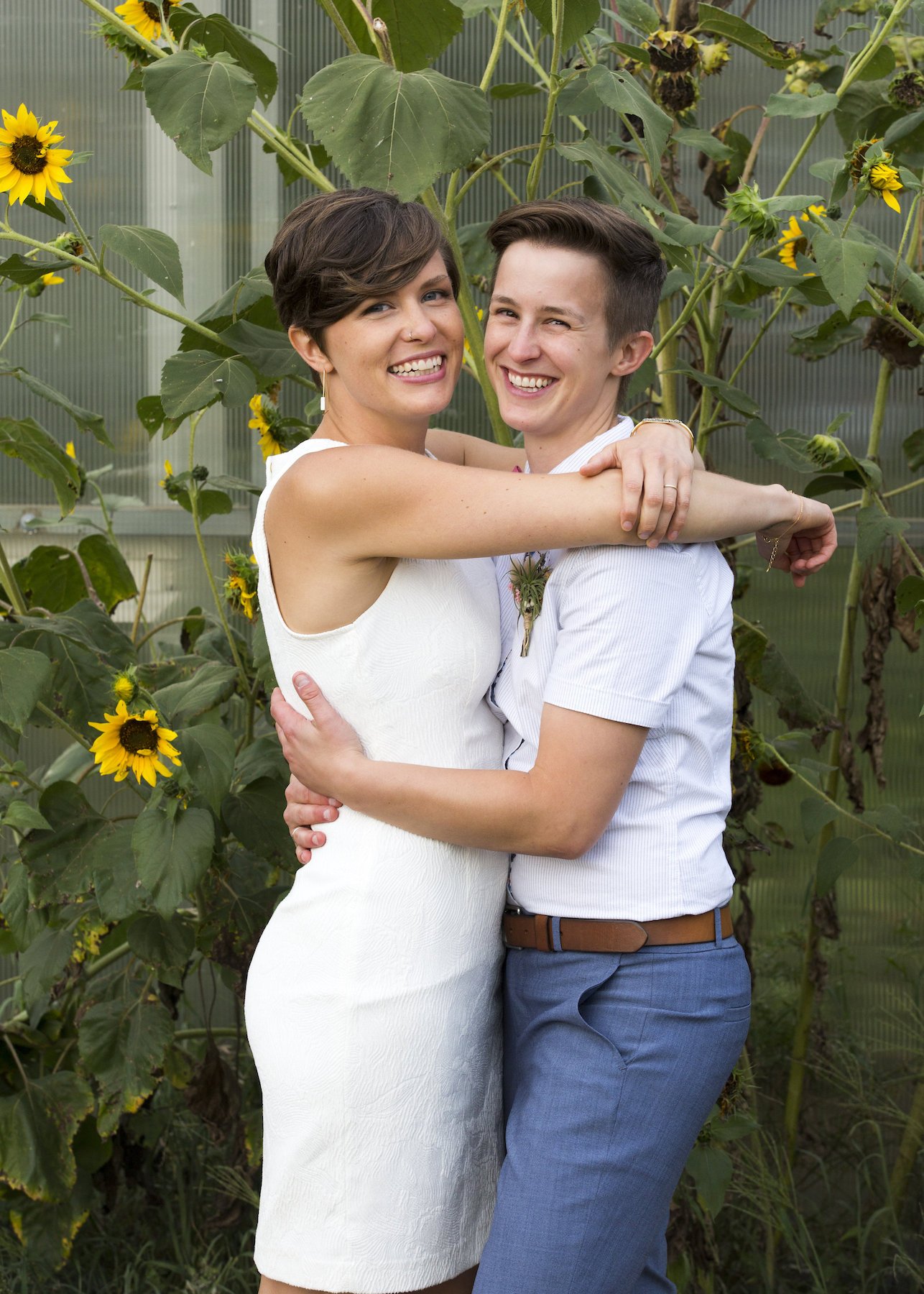 Kara and Genevieve both envisioned a farm wedding, and worked tirelessly over the course of their year-long engagement to bring that vision to fruition just north of Boston at Wright-Locke farm. Avid DIY-ers, they enjoyed making their own laser-engraved giant jenga, concrete succulent holder center pieces, hanging flower arrangements for the ceremony tree, and signs. They wanted their wedding to be a reflection of their relationship and their shared interests and values, so they hired Season to Taste, a Cambridge-based caterer who sources only from local, organic farms.The same degree of careful consideration when into choosing their wedding photographer, who expertly balanced their desire for documentary-style, candid shots with minimal posed portraits. 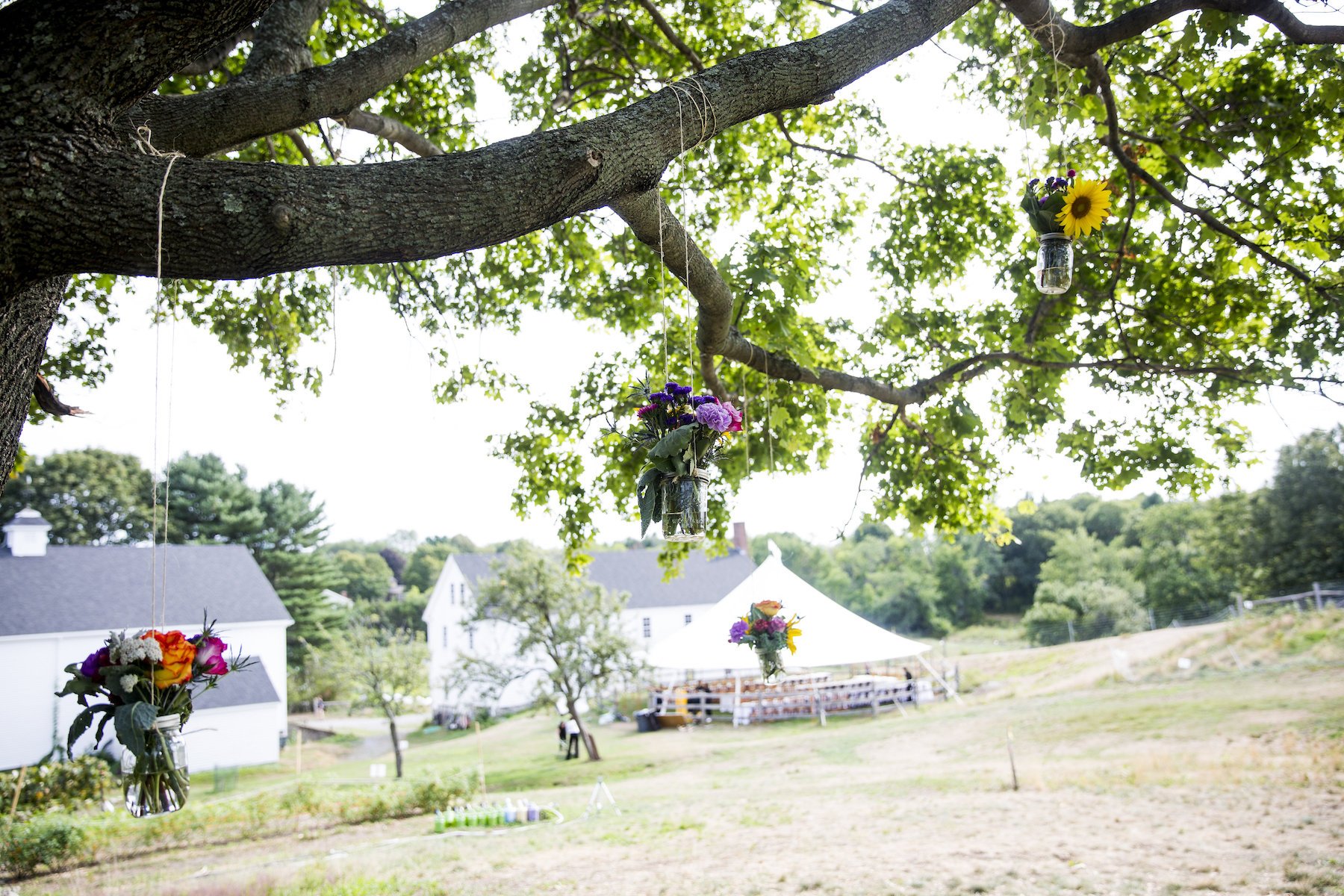 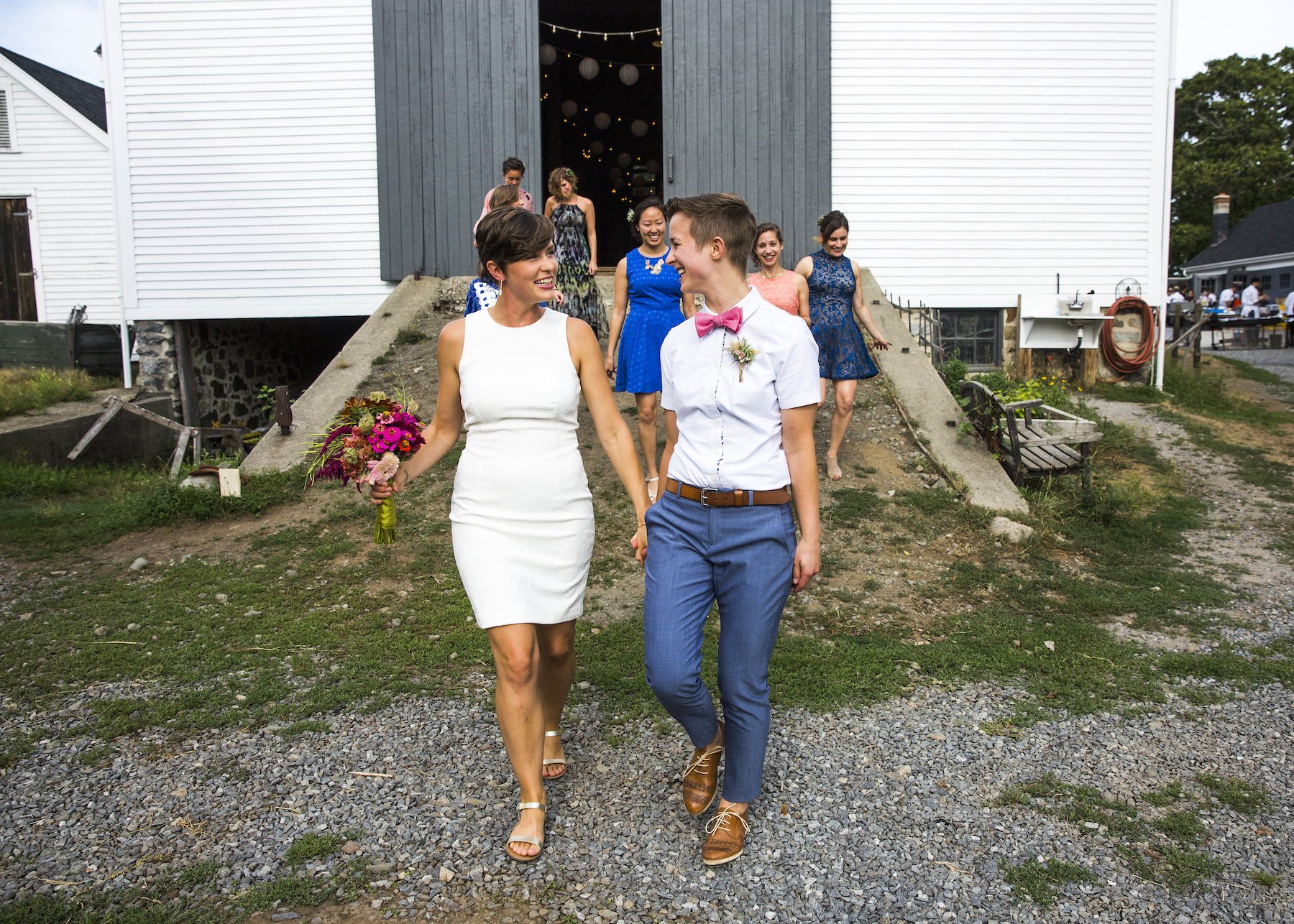 Their wedding day unfolded seamlessly, beginning with a short ceremony under a tree at the farm, which family and friends participated in. They each wrote their own vows: equal parts humorous and heart-felt. The ceremony was followed by a prolonged cocktail “hour” complete with lawn games, whiskey sours, craft beer kegs, and a local blue grass band: Damn Tall Buildings. Family-style dinner was served at three long tables, to encourage folks to mix and mingle with no seating plan, and a few best friends honored the brides with well-crafted toasts. After dinner, folks moved to the farm’s 1827 barn for dancing and dessert. Genevieve and Kara opted to skip a fancy wedding cake and cake-cutting ceremony. Instead, they instead ordered a tiramisu-inspired cake without mentioning their impending nuptials, and proudly saved several hundred dollars. The cake was a formality for the occasion, and they were much more excited about the milkshakes that were served! 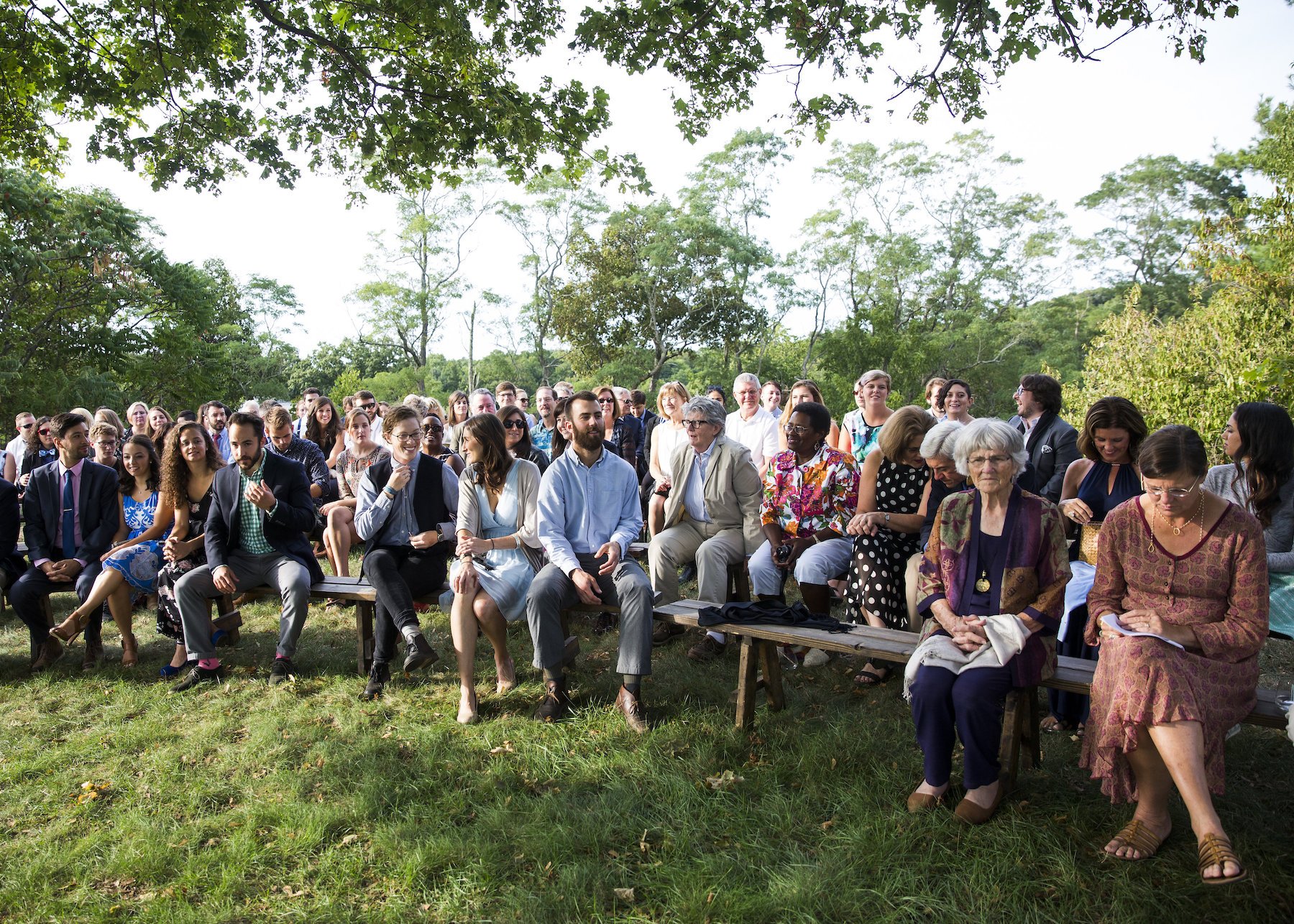 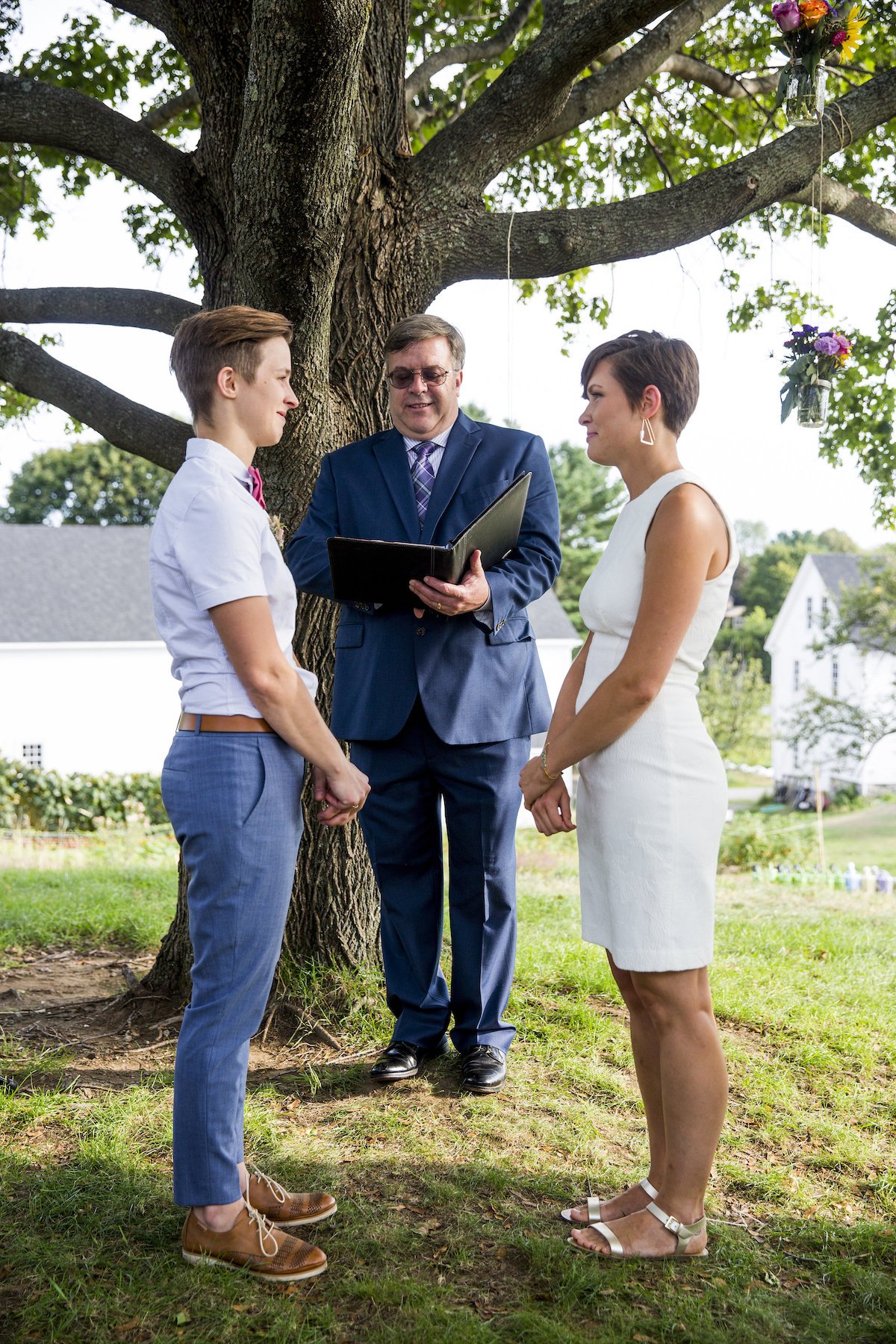 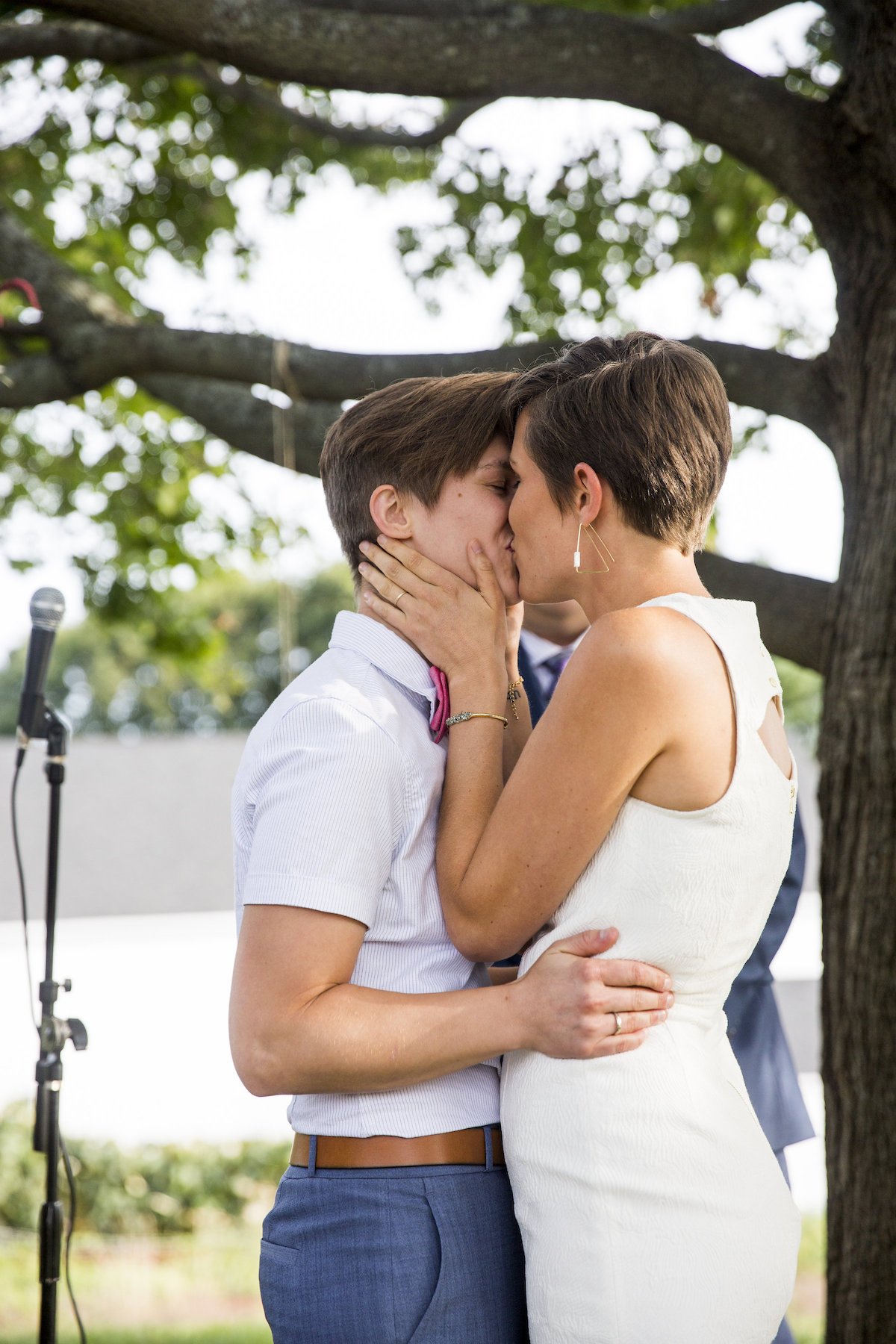 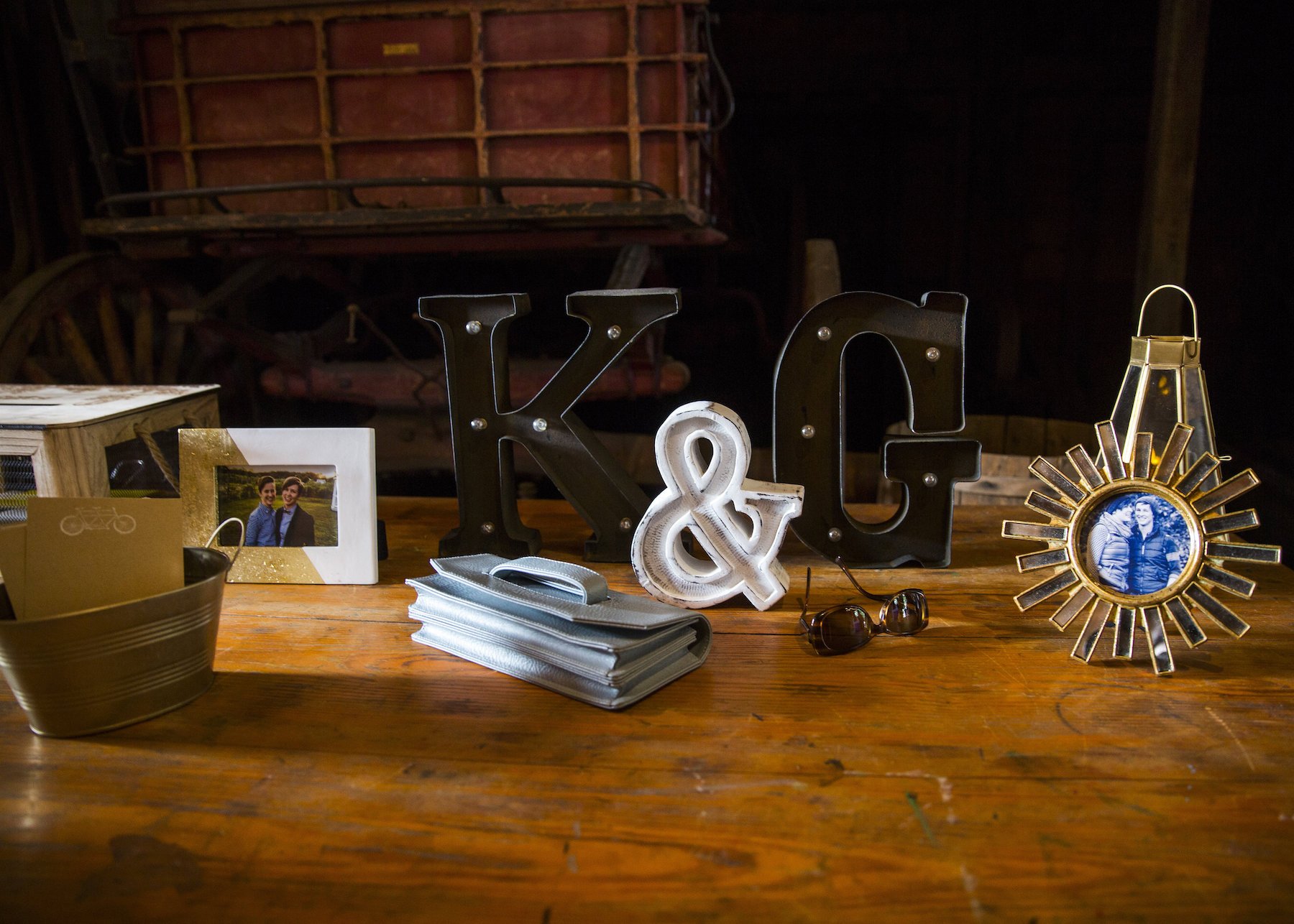 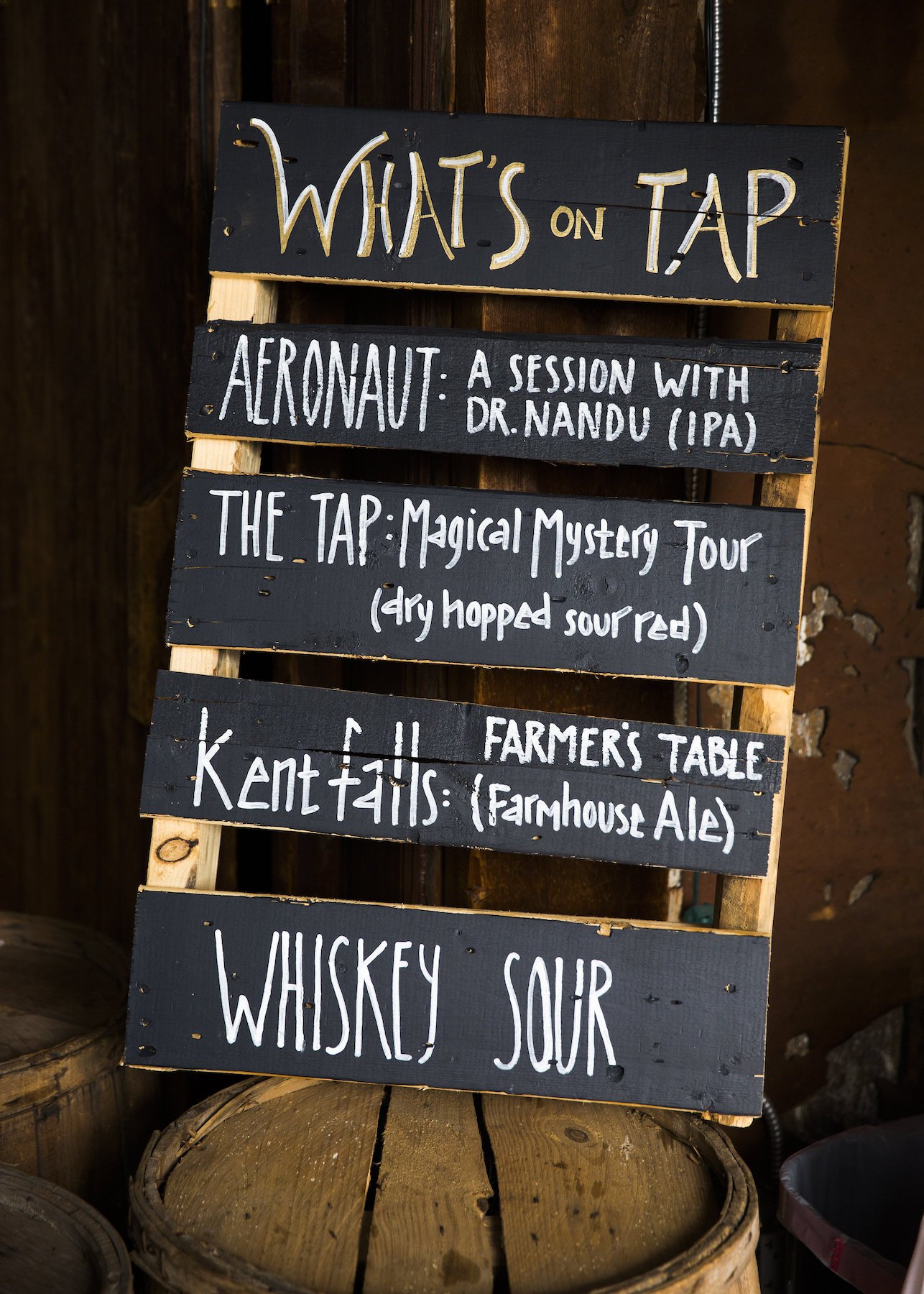 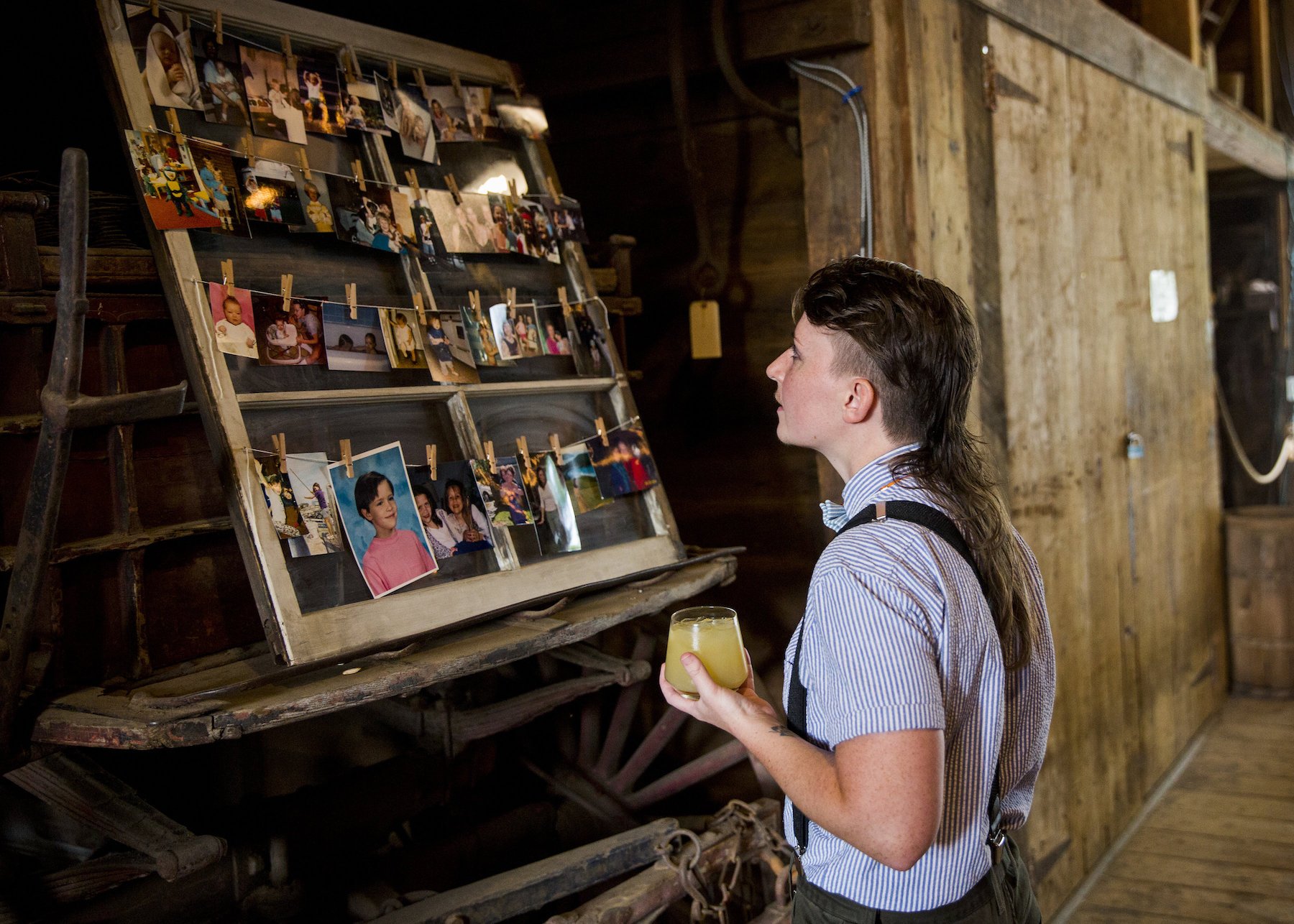 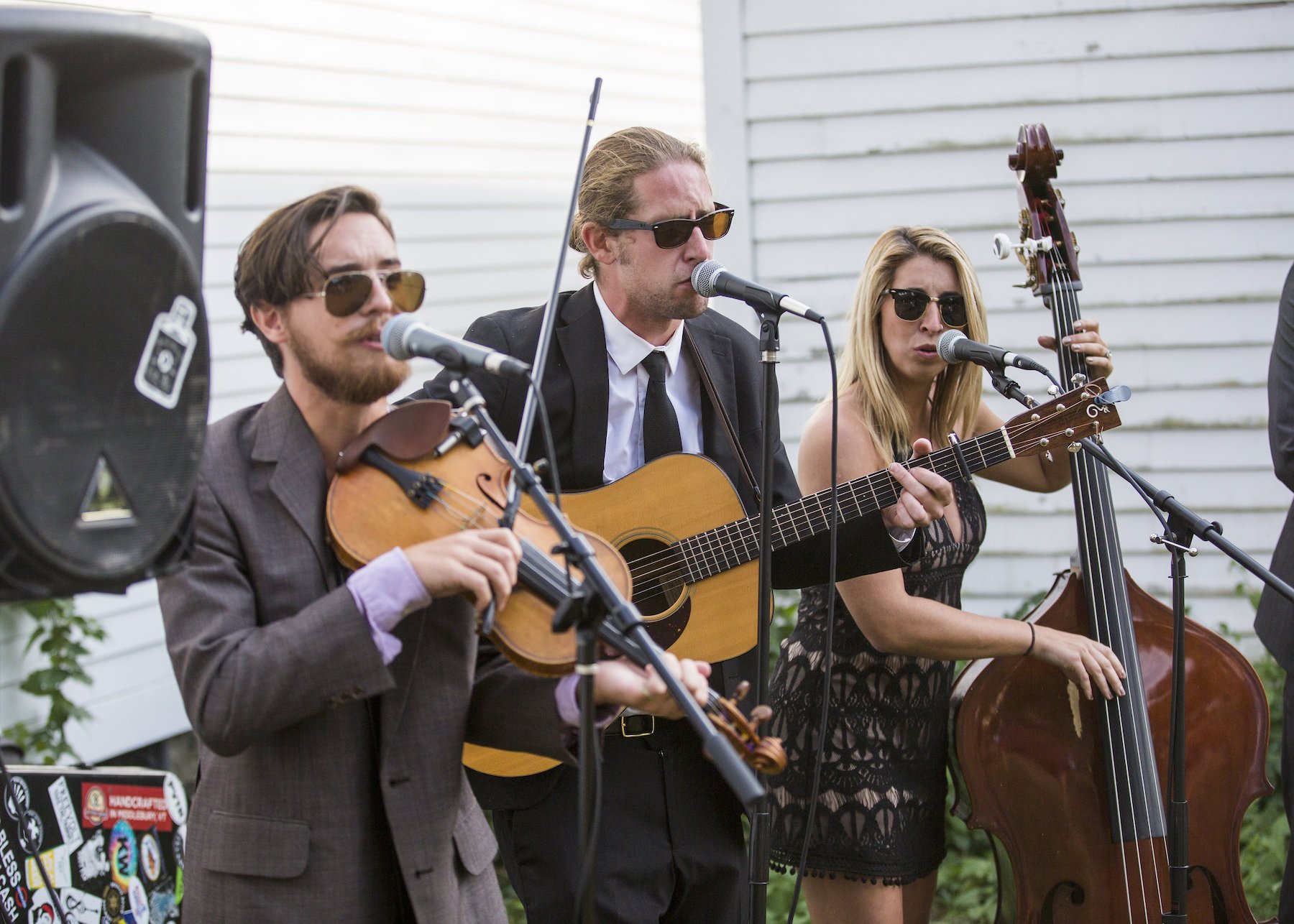 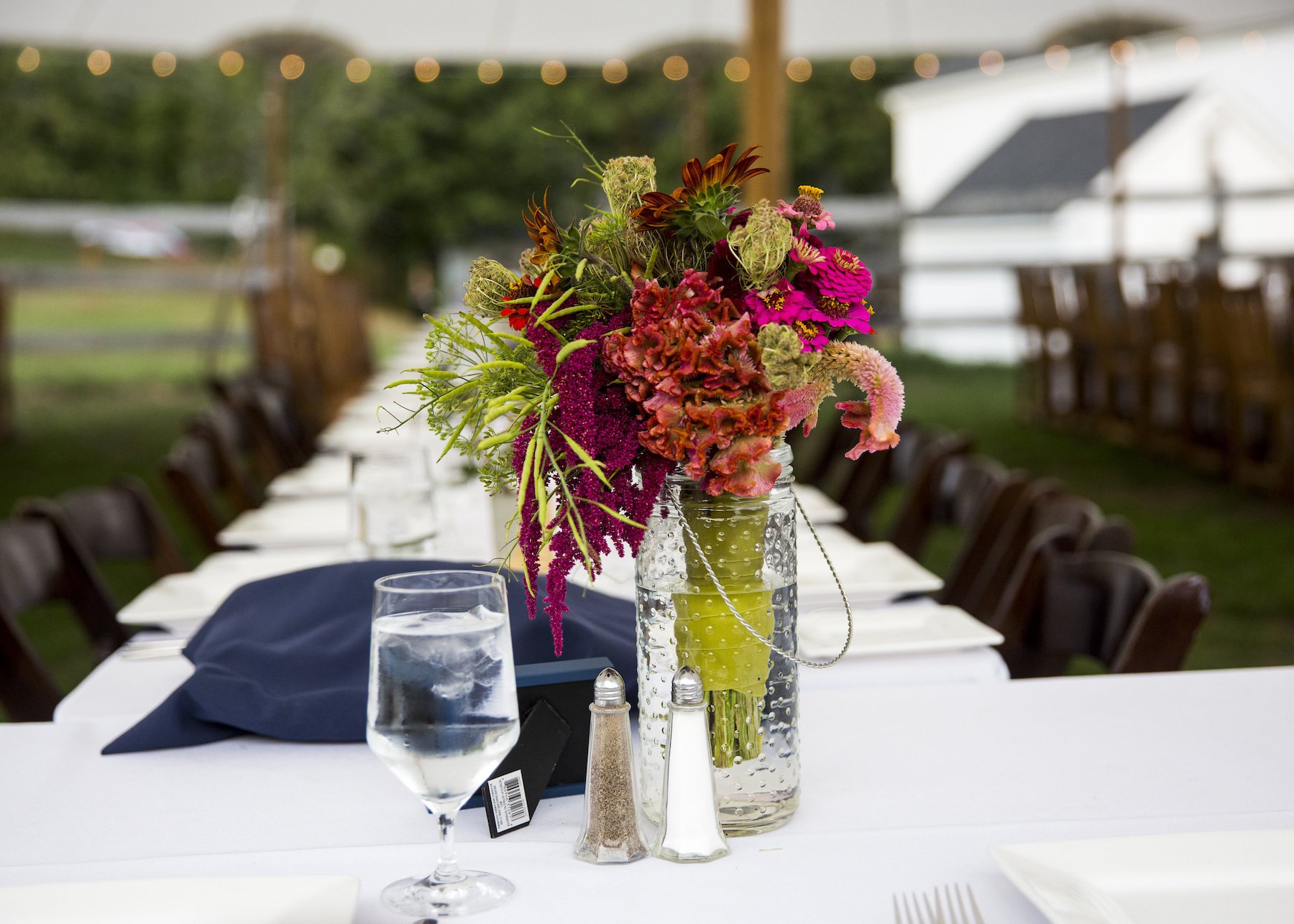 Given their farm wedding vision, Genevieve and Kara intentionally chose wedding attire to match the outdoor setting and laid-back vibe of the day. For the ceremony and cocktail hour, Kara wore gold J Crew sandals and a simple high neckline, sleeveless white dress. Most guests would never have believed it, but she put more energy and money into finding her accessories, which included a pair of gold and white marble earrings. Just before dinner-time toasts, she snuck off with a close friend to change into oxfords, dress pants, a linen dress shirt, floral skinny tie, and leather suspenders. The motivation behind the mid-day costume change was to honor her everyday style versatility, her feminine side, and her masculine side. Kara’s bridal bouquet was lovingly designed by a close friend a fellow-midwife, who worked as a bi-coastal celebrity florist in her twenties. She used only flowers from her garden, and included a hawk feather that she’d stumbled upon while ambling through the woods of Western Massachusetts. The most touching detail of the bouquet were the pins, which were from her own great grandmother’s bridal bouquet. Genevieve’s mother is an incredibly talented seamstress, and had always promised to make her a wedding dress. Once Genevieve settled on not wearing a dress, her mother swiftly changed gears and made a subtly pin-striped dress shirt, which Genevieve paired with a salmon bow tie, blue dress pants, and Pikolinos oxfords. Genevieve wore an air plant boutonniere, and all of their bridesmaids wore succulents in their hair. 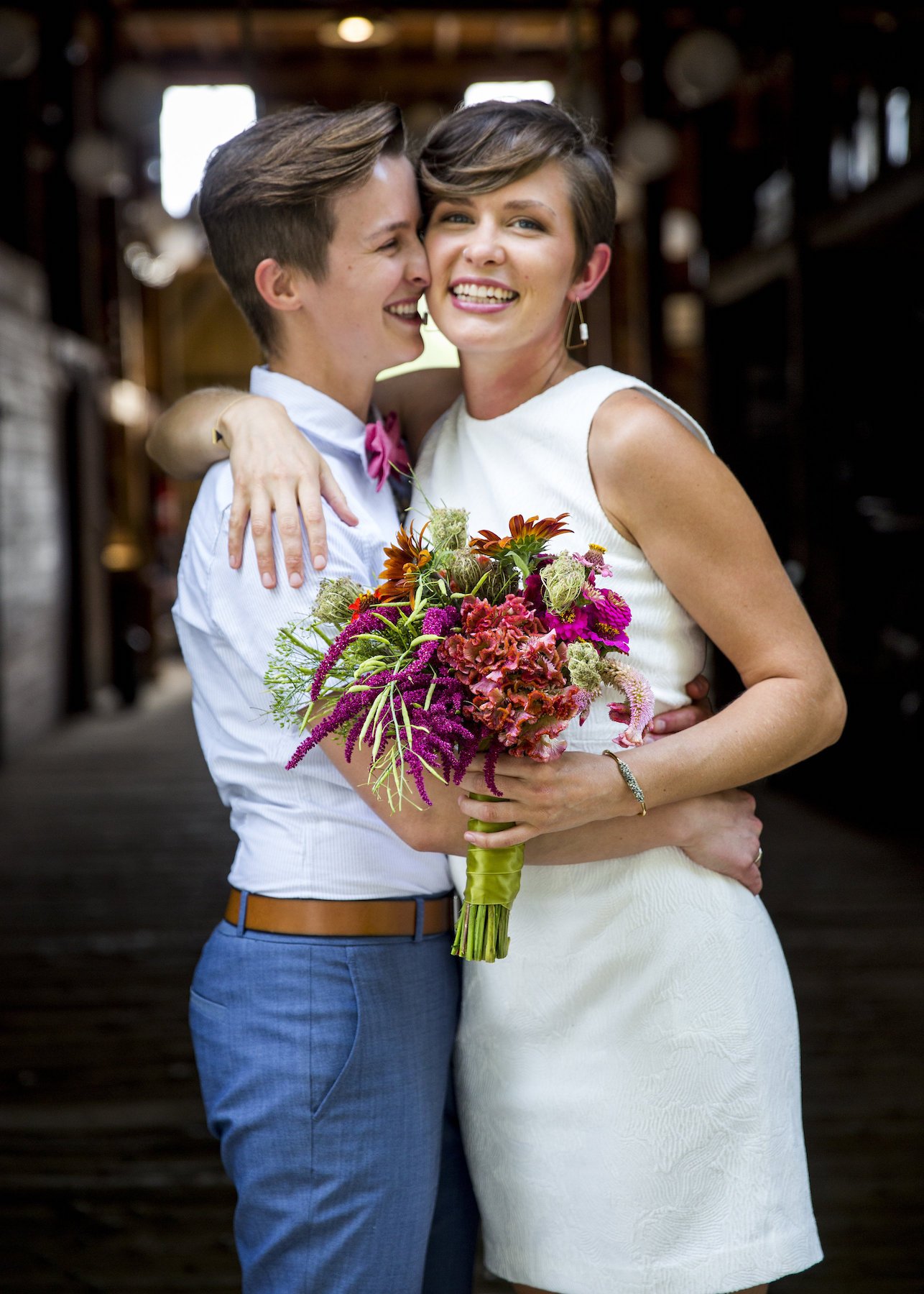 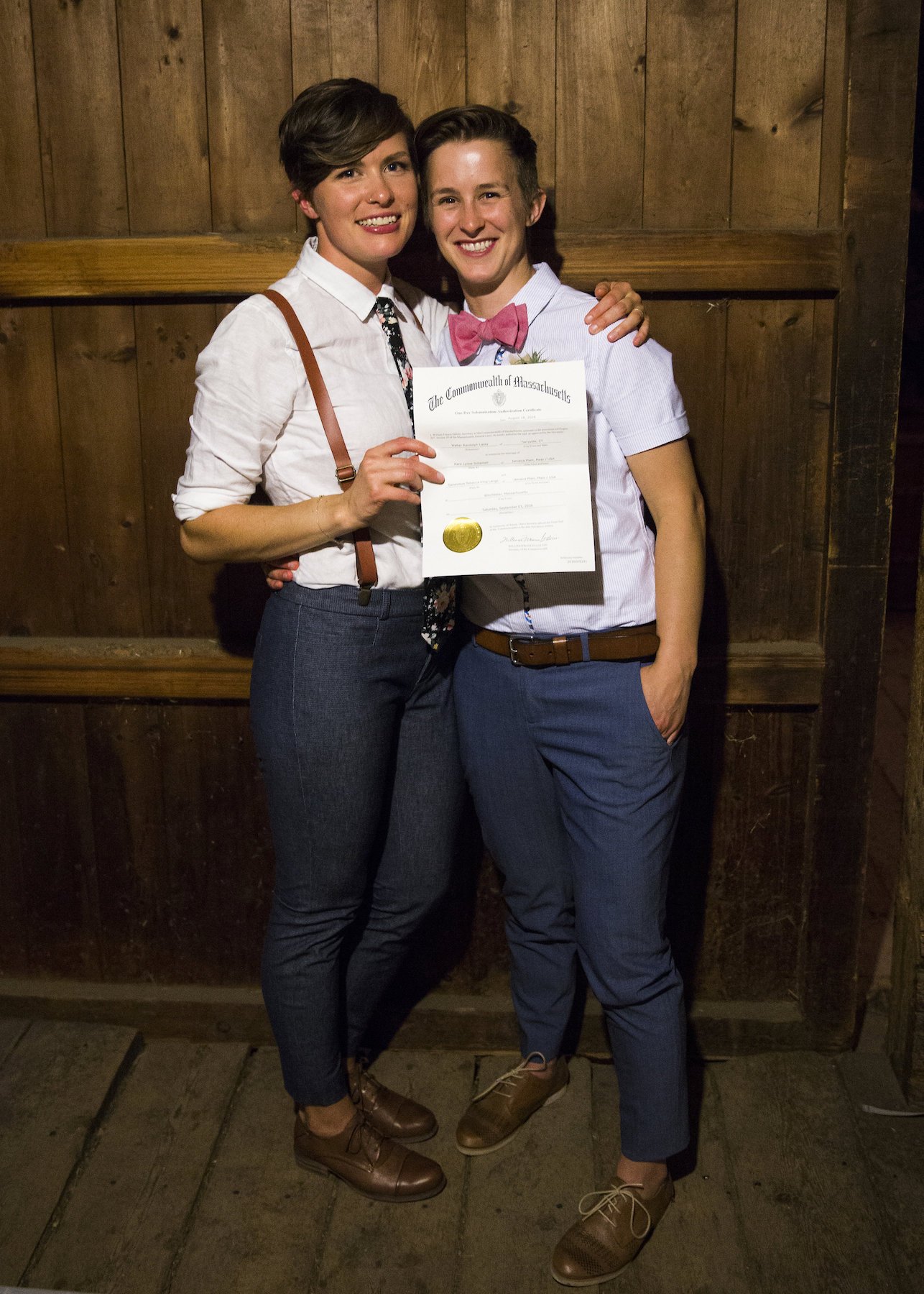 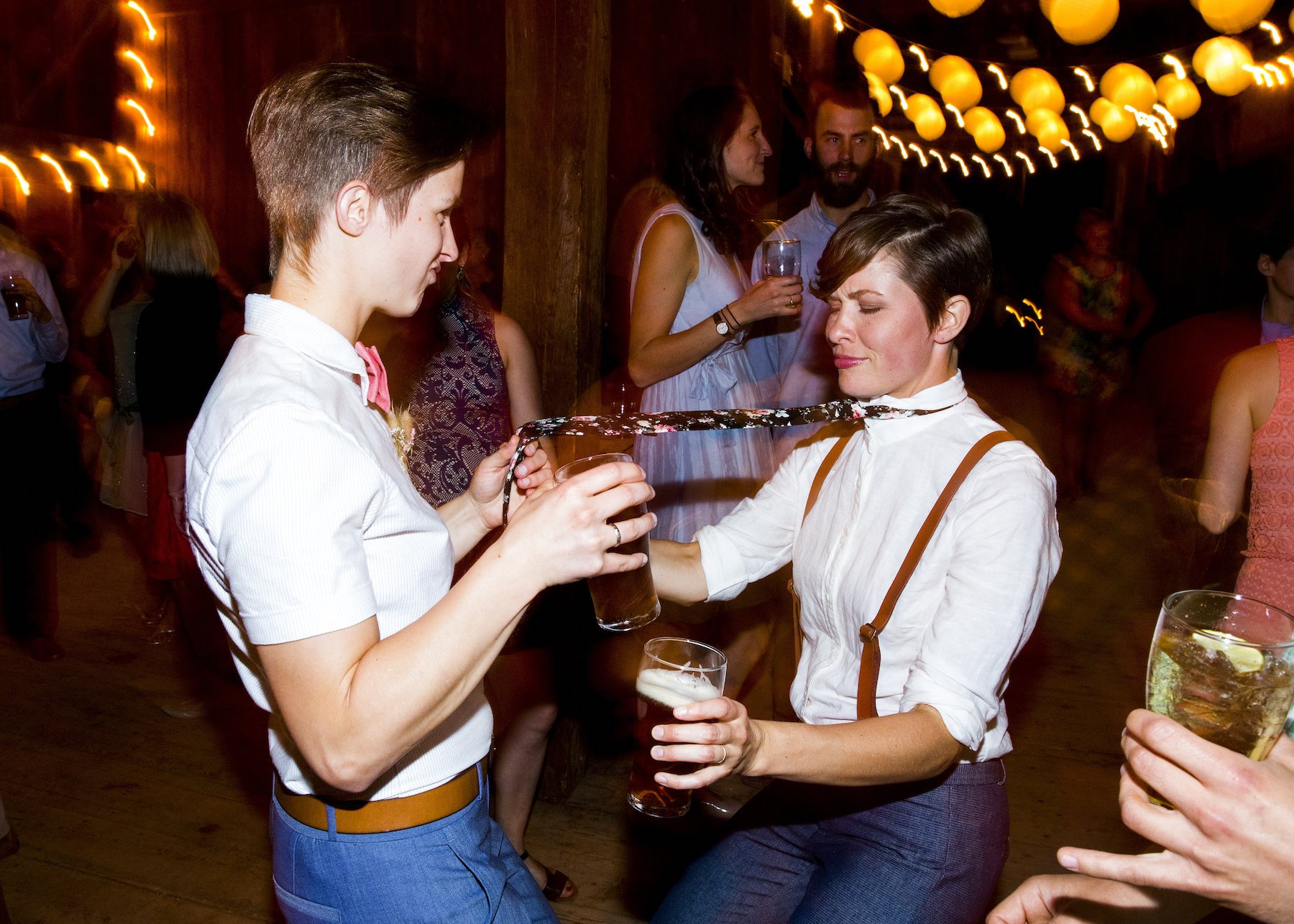 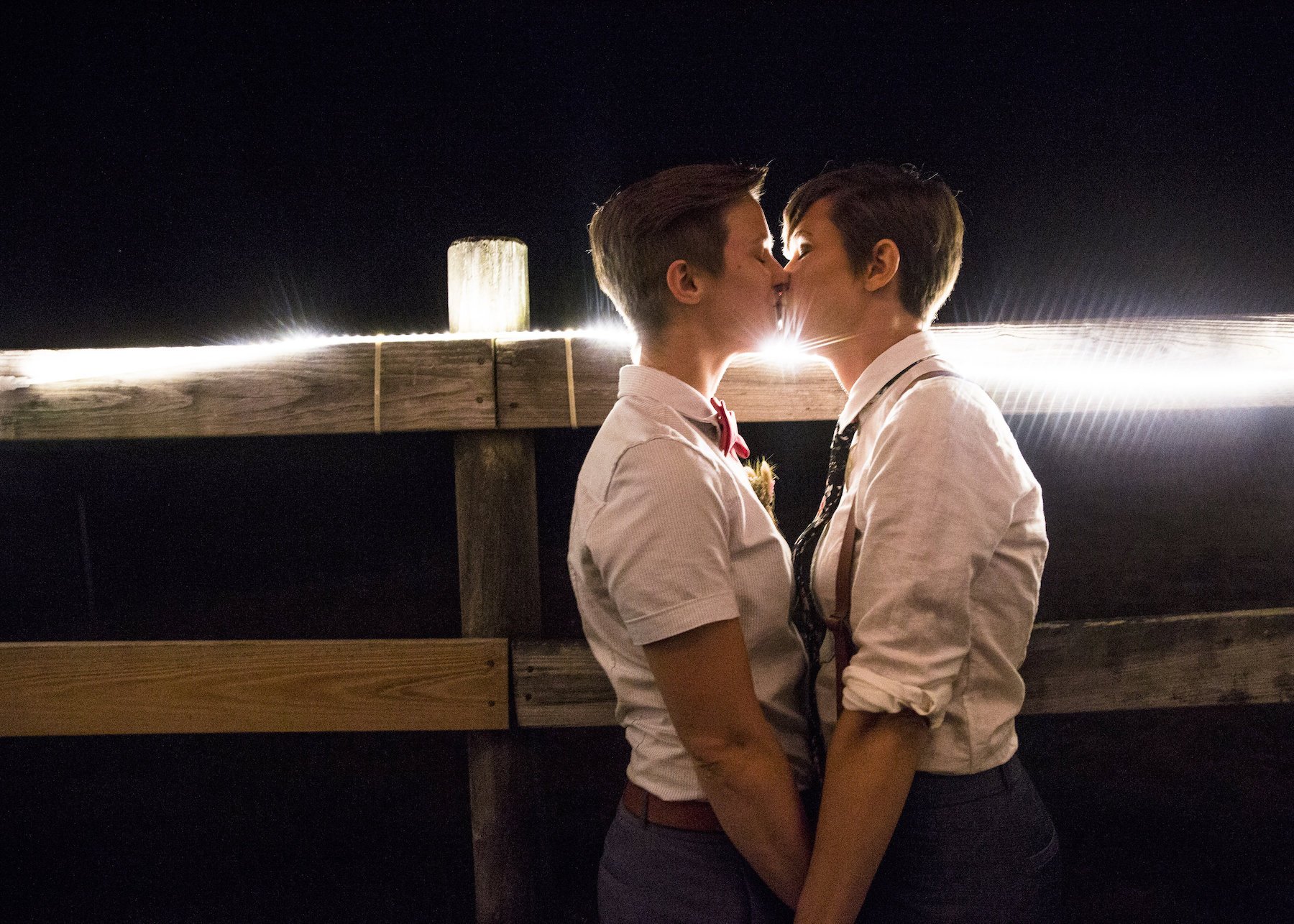