Alien: Covenant, the latest in the Alien film series, was released last month. So, I spent this weekend re-watching some of my favorites in the Alien horror franchise. My favorite is the second film in the series, Aliens (diehards will scoff, but I’m more a Star Wars fan, so I won’t fight you on the cinematic details), which was released in 1986. I was ten years old when Aliens premiered  (feel free to do the math, because my melanin be poppin’) and I recall not being able to take my eyes off of Aliens character Private Vasquez, a tough-as-nails, masculine presenting woman Marine. I wanted to be as cool as her. I wanted to be as tough as her. And, I also thought she was cuter than the teen cis boys in Bop magazine. I mean, for those of you who want to reminisce, or the youngin’s who never knew, just take a look at this YouTube montage of Private Vasquez I found. (Just go with the classic rock anthem…it works.)

At no point in Aliens is Private Vasquez’s sexual orientation ever brought up, but her character became a butch icon. In the 80s, her character, irrespective of any assumed sexual orientation, was a powerful representation for all women – that women could be tough, masculine, muscular, sexy, but not defined by who they had sex with or praised for their sexual availability. For a mainstream audience, Vasquez was a fighter, first and foremost. But, for some of us, she was also a role model and crush worthy. Here’s to you, Private Vasquez. 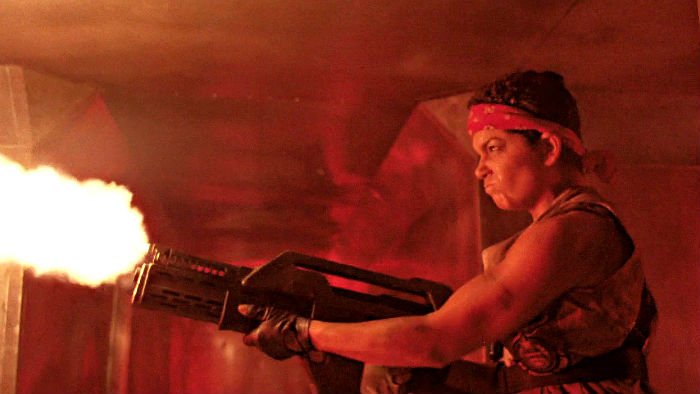