Queer and trans people have always existed, and, although one shouldn’t conflate sexual orientation, gender identity, and gender presentation, LGBTQIA+ communities have a rich history of leveraging fashion to dismantle binary gender constructs. Some people have argued that the mainstream fashion industry has not received this memo given their insistence on reinforcing the notion of “menswear” vs “womenswear,” but they have indeed received, opened, and carefuly studied the memo. In fact, mainstream fashion’s relationship with queer style mirrors its relationship with style from other (often overlapping) minority cultures in that the “other” is seen as “exotic”, then co-opted, treated as trend, scrubbed from its history, fetishized, and presented through a sterile conduit of white heteronormativity that is palatable for mainstream audiences, devoid of any context. Luna Luis Ortiz, activist and father of New York’s famed House of Khan, once noted on Huffington Post Live that he saw firsthand how, several decades ago, mainstream designers would send covert operatives to ball events who would steal ideas that were later seen in major fashion week runway shows without any credit to the original designers or LGBTQIA+ QTPOC communities from which the designs came.

Though it seems that mainstream style is recognizing “gender fluid style” as more of a mainstay than trend, much of this awakening is based on economics. The market is being forced to respond to the fact that Millennials and younger generations are increasingly openly eschewing ridged binary gender norms and/or themselves are identifying under the LGBTQIA+ umbrella. However, time after time we see that, while the mainstream fashion industry understands our communities’ dollars, they do not understand our communities. The French brand Avoc evinces this lack of understanding. According to the Business of Fashion (BOF), “For the Paris-based label [Avoc], mixed-gender runway shows are only the beginning when it comes to unifying its men’s and womenswear offerings.” Bastien Laurent, one of Avoc’s co-founders told BOF, “The idea behind Avoc is to go beyond gender and social conditions, but we don’t call it unisex. We don’t believe in a collection that would fit both men and women. The way we approach it is that it’s one collection created around the same aesthetic, language and creative direction.”

Queer fashion shows are vital to reclaiming the narrative of queer style and honoring queer style visionaries. Though these shows are now getting more mainstream coverage (some mainstream platforms are so confused that they are arguing whether gender neutral style is “here to stay”), queer fashion shows have been a staple of ball culture, which thrived in the mid-80s, but can be traced back to 1869 at The Hamilton Lodge Ball.

This  year, dapperQ wrapped our fifth annual New York Fashion Week show at Brooklyn Museum. While this was our fifth show at Brooklyn Museum, the event actually marked our 12th queer style runway show since our launch in 2009. Even before our very first show, Fallon Davis, who many know as being one of the masterminds behind Oakland’s Queer Fashion Week, was producing stud fashion shows across the country from Brooklyn to Atlanta to Charlotte to Pittsburgh.

More recently, NiK Kacy of NiK Kacy Footwear launched L.A.’s inaugural Equality Fashion Week, which came on the heels of the second annual London Queer Fashion Show. The dapperQ show at Brooklyn Museum, Equality Fashion Week in L.A., and the London Queer Fashion Show all occurred within weeks of each other. But, what was unique about these shows was a demand for greater visibility during each city’s larger mainstream “official” fashion weeks.

So much love, so much queerness, so much inspiration! Thank you to everyone involved and everyone that came 🎉🌈🎉 #lqfs

First part of the London Queer Fashion Show was everything! We can’t wait what fab queer designers are on next✨❤️✨ #lqfs

The designers behind the QWOC owned brand Stuzo Clothing stated, “For Stuzo, our focus is on continuing to create genderless fashion. It was always at the forefront during inception and will always be our mission. Equality Fashion Week has established a voice for queer fashion during LAFW. It is now up to us to continue to show up and elevate the movement. We are delighted and committed to participate on platforms such as dapperQ’s NYFW show and Equality Fashion Week for LAFW. These events continue to celebrate queer fashion in all its glory and we support that. We feel that the mainstream fashion houses have adopted the genderless fashion craze without the credit to the queer community. These practices tend to retire quickly due to lack of originality and being genuine. Stuzo has always designed clothes that represent ‘us’ in every way and we’re not going to stop now.” 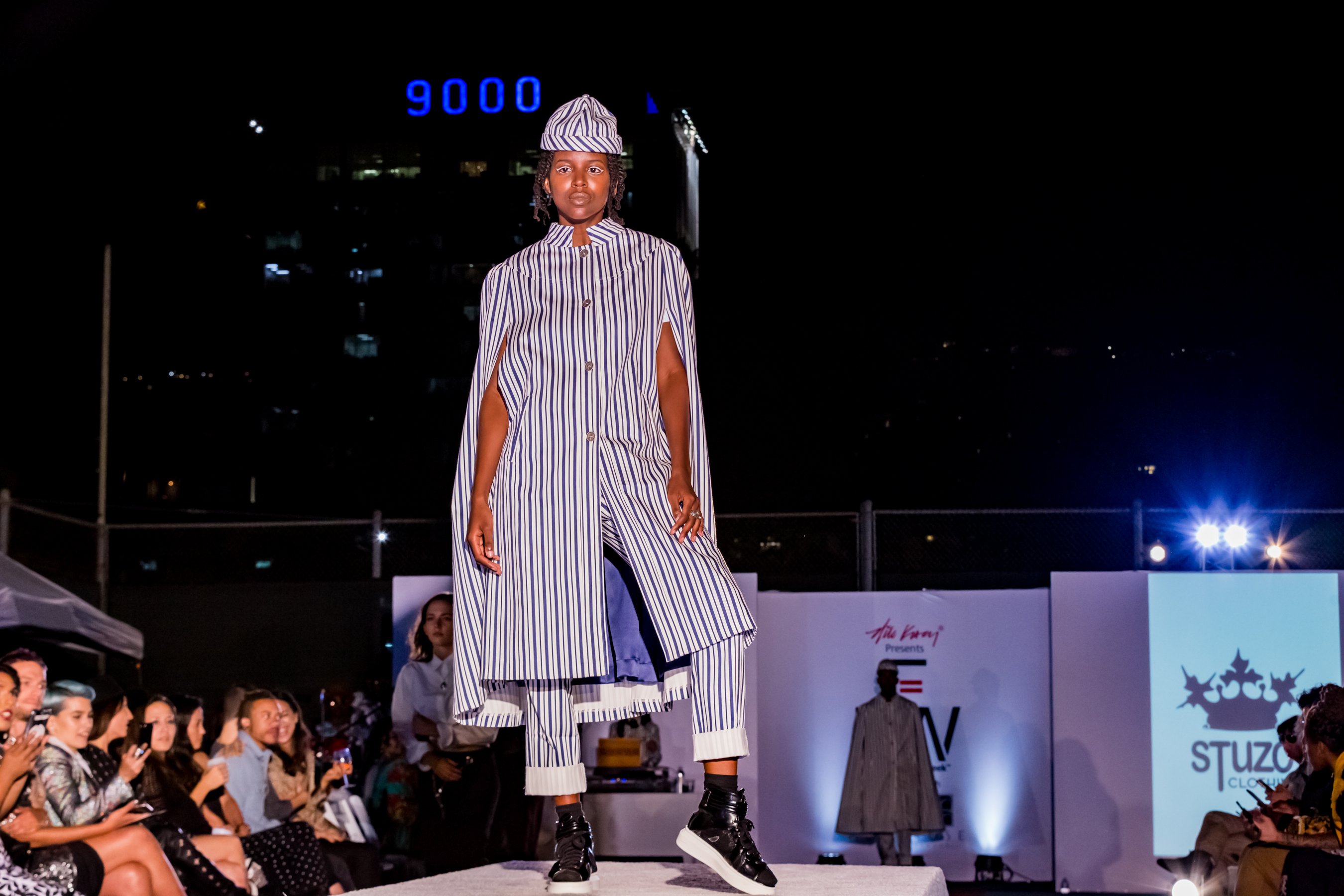 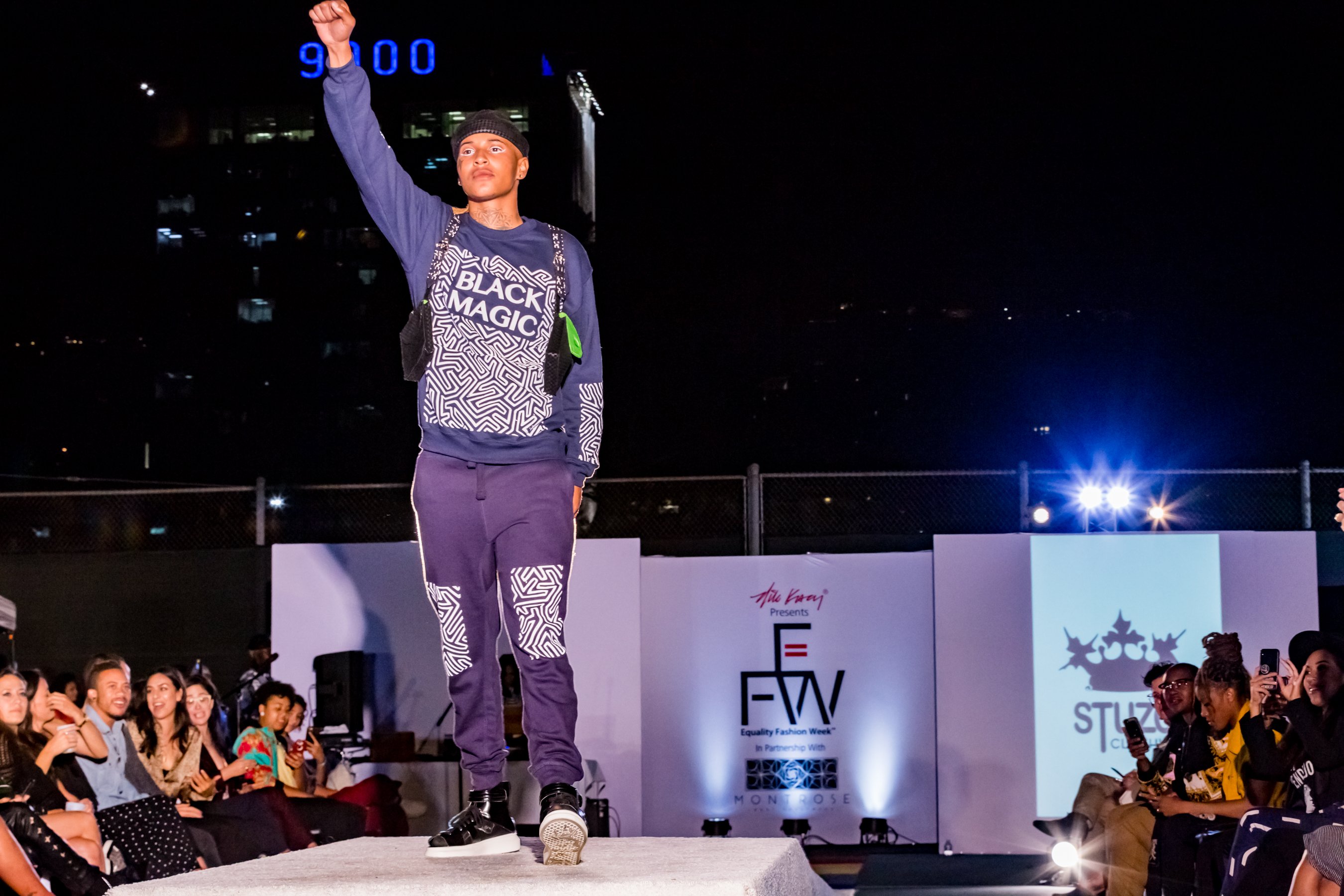 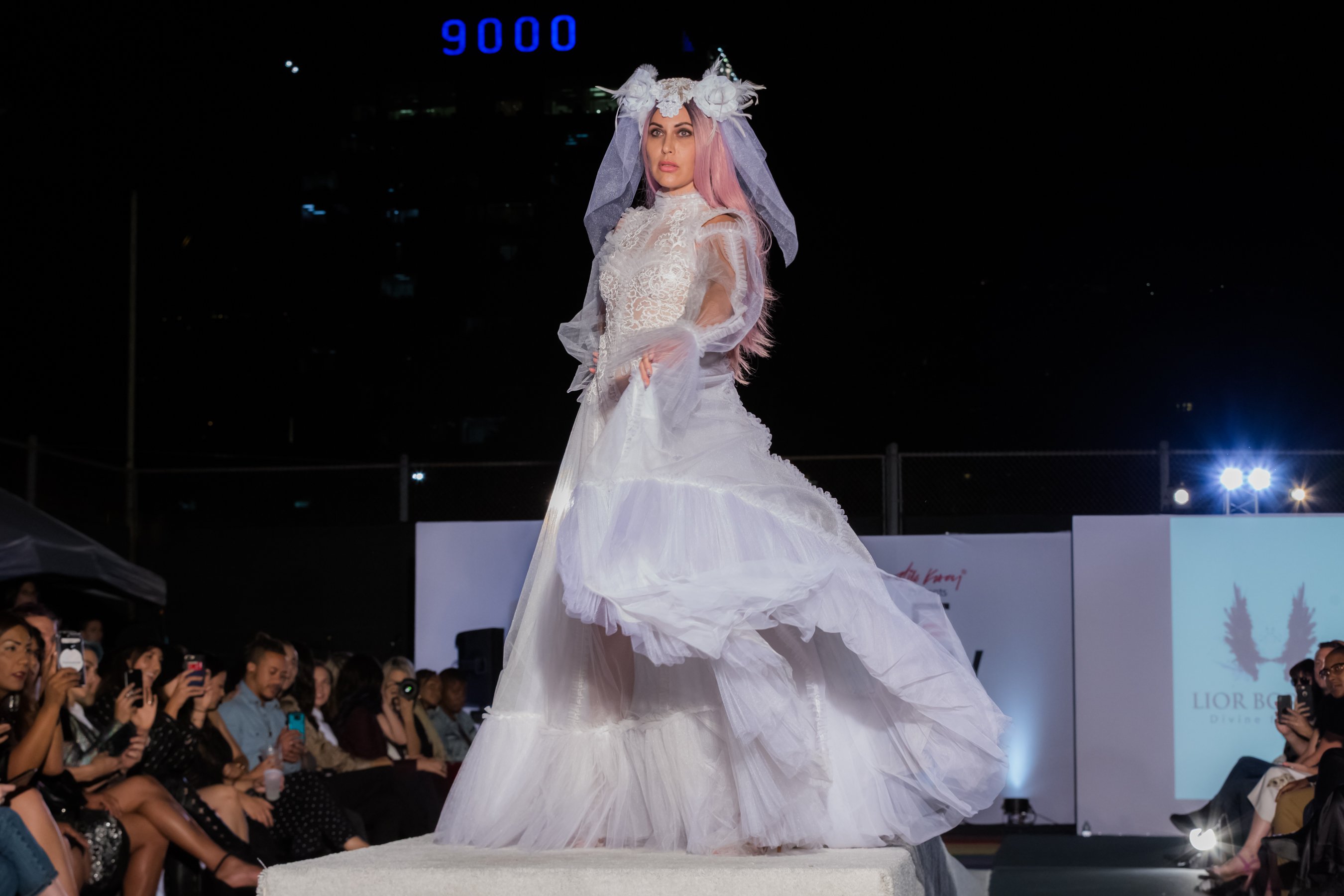 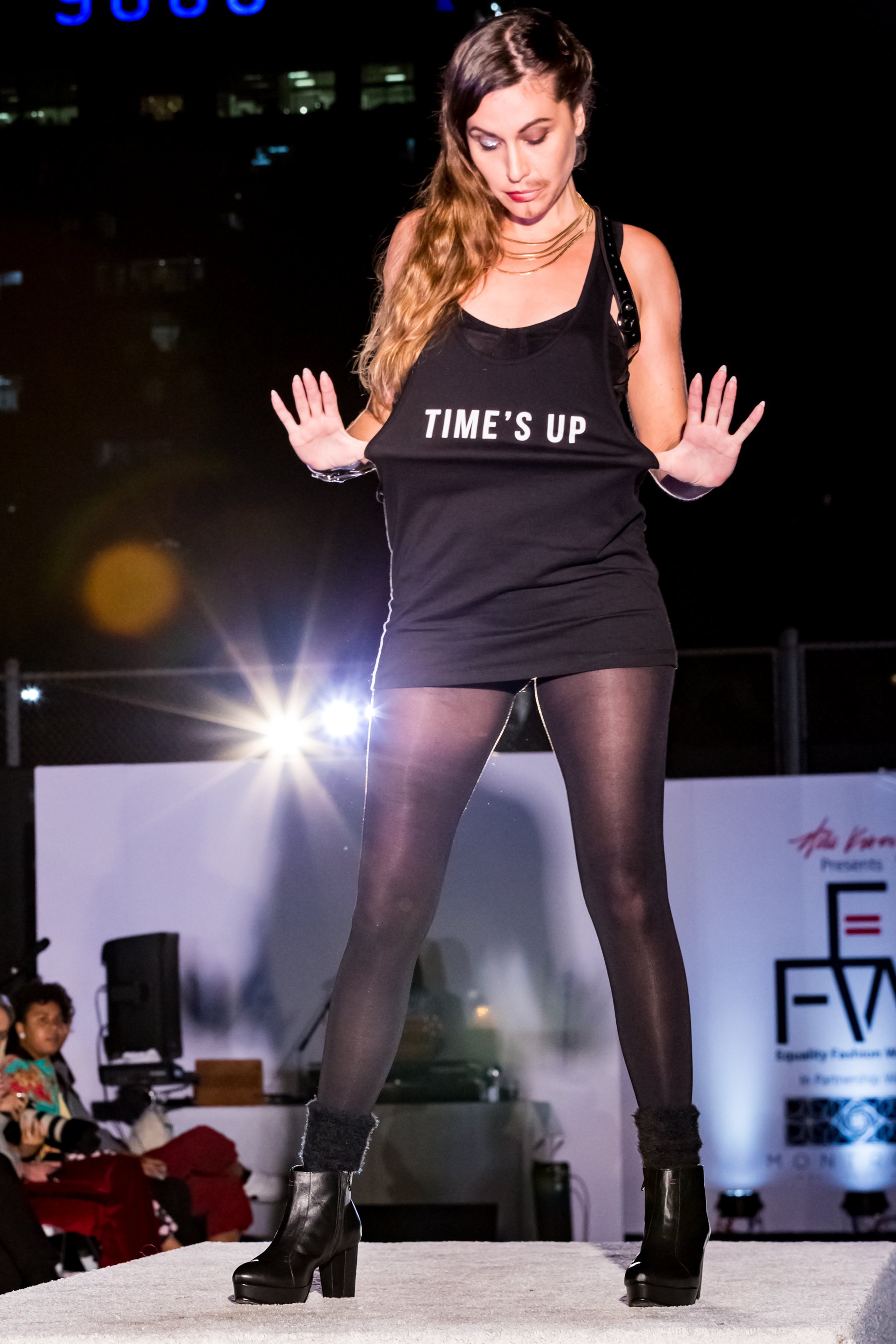 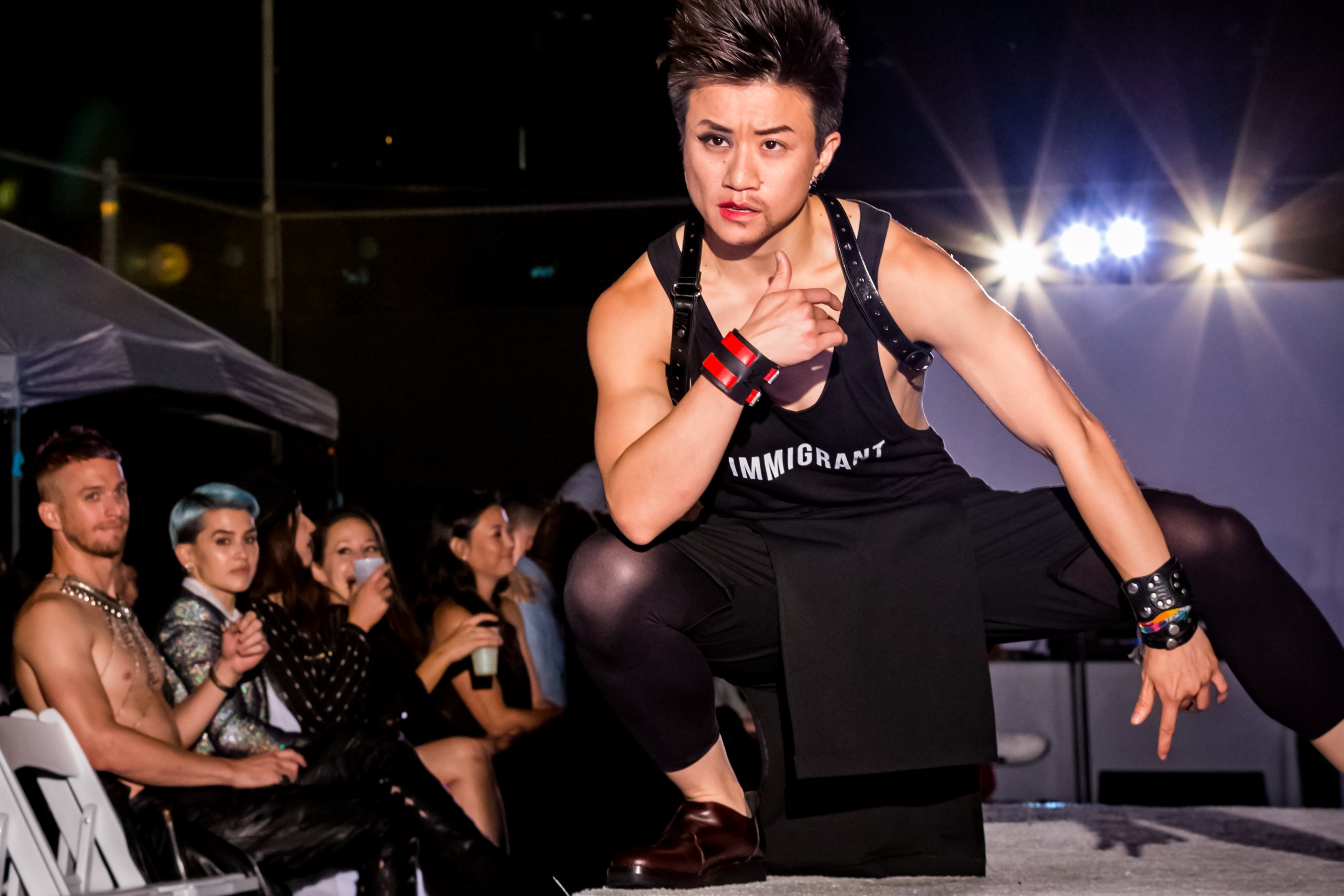 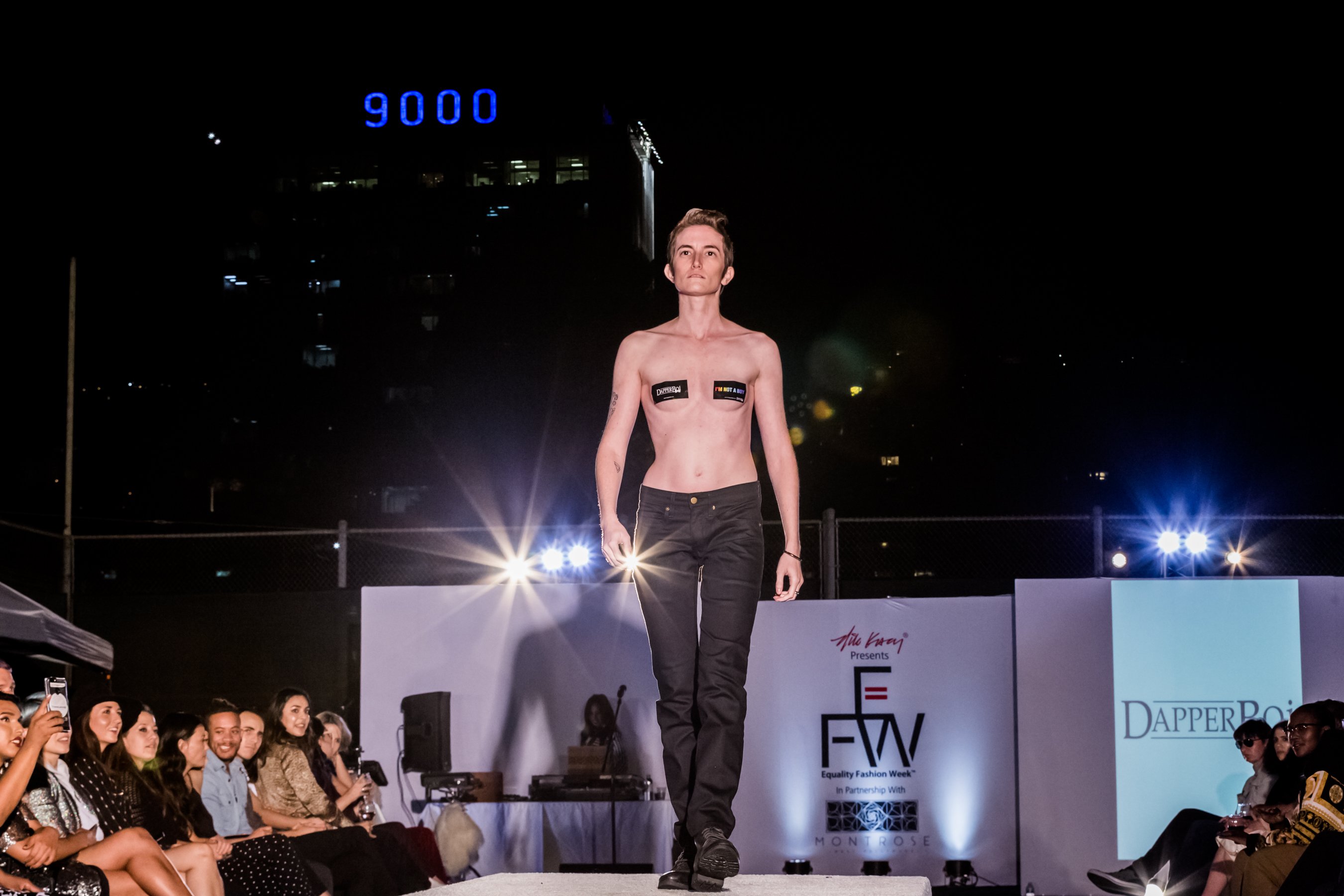 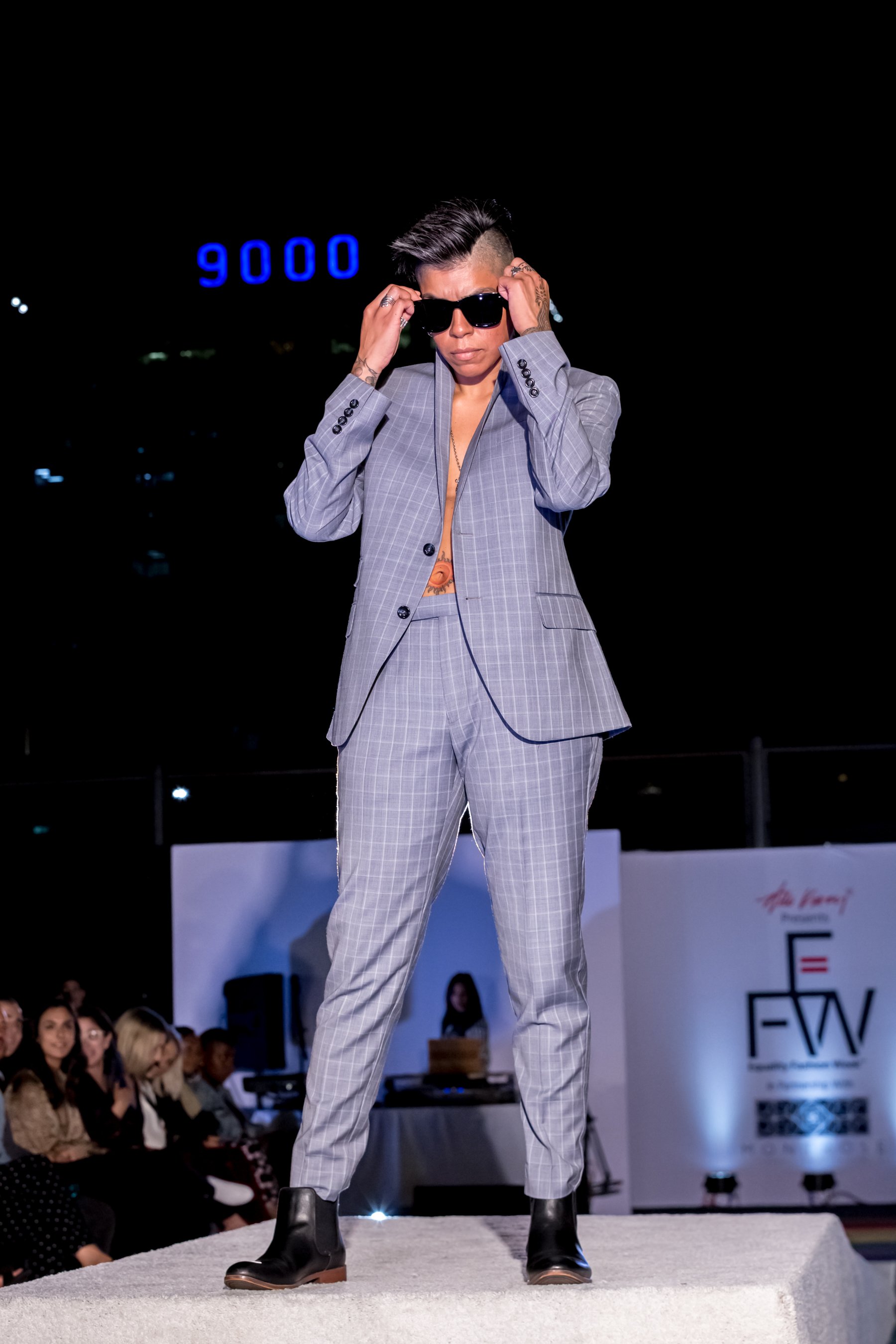 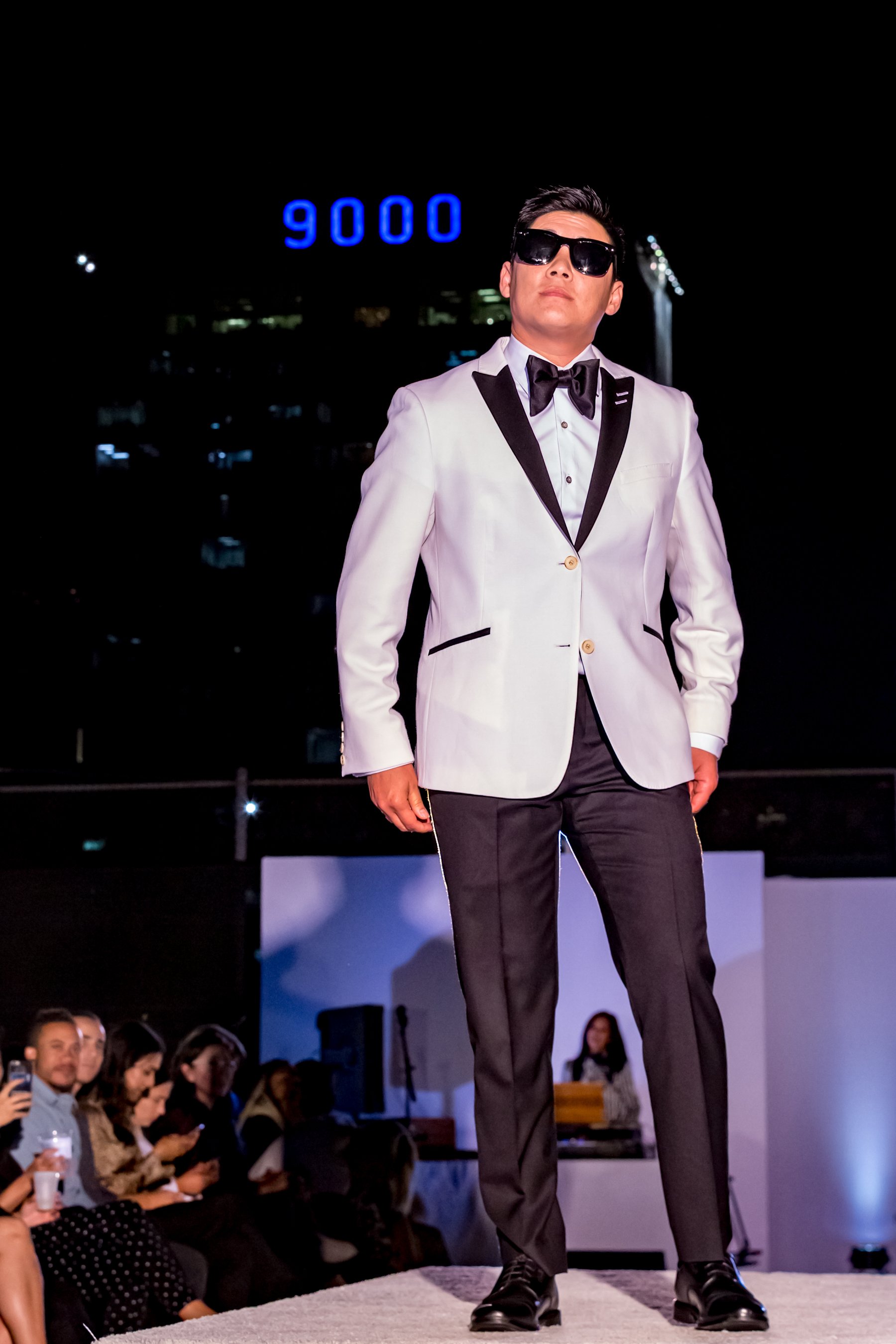 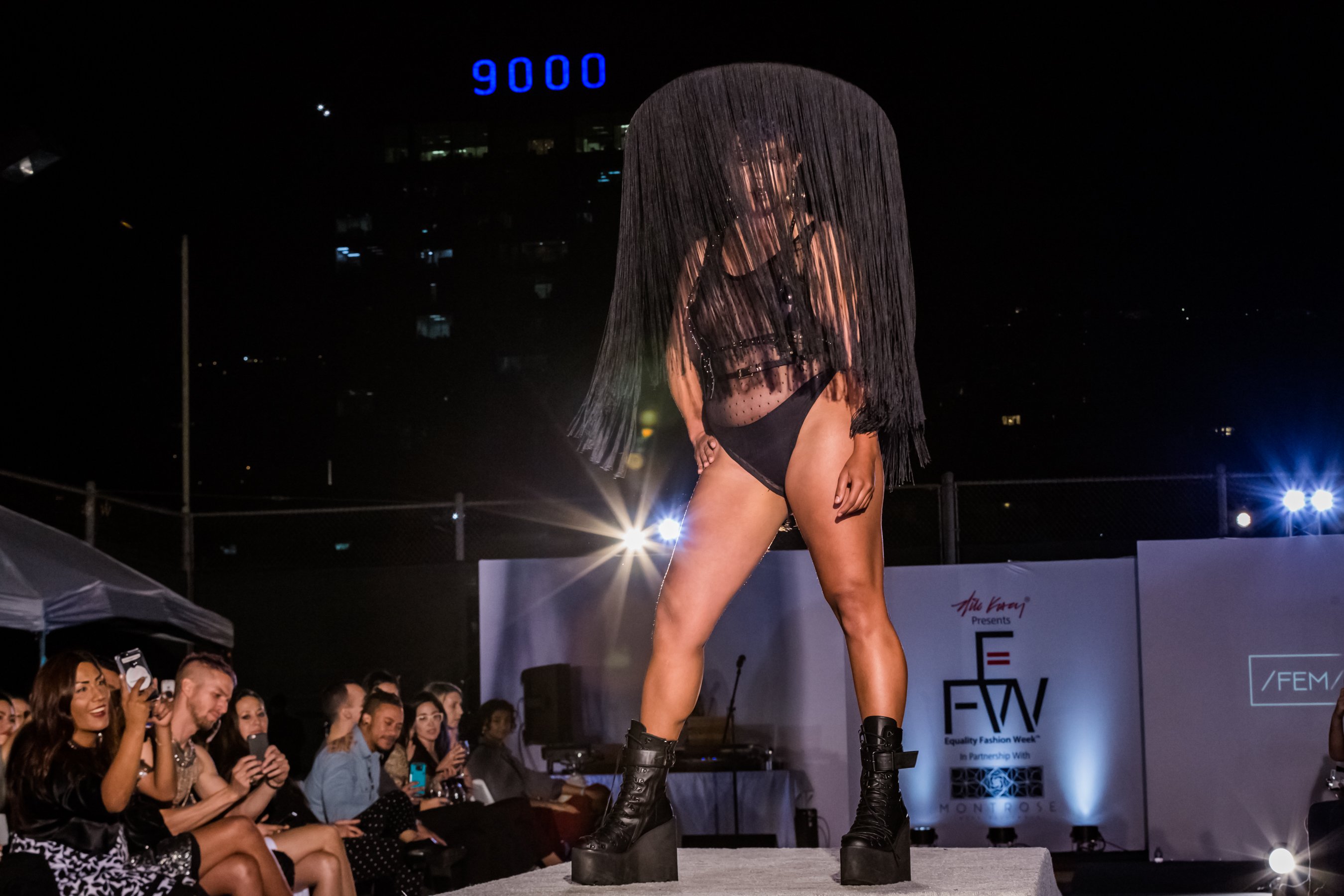 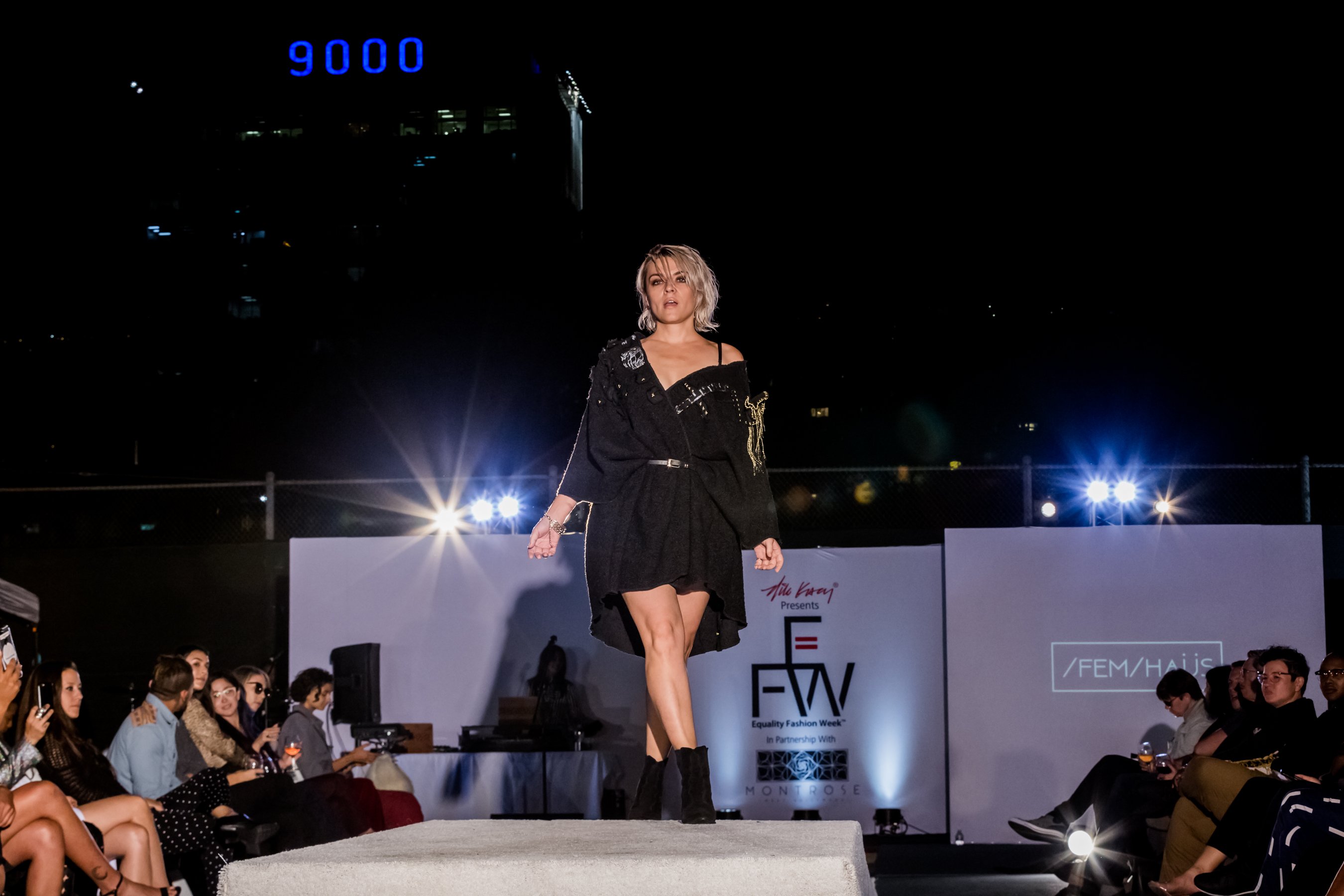 This type of visibility on a fashion week platform is critical for reclaiming narratives about queer style and ensuring that queer bodies and creatives are not erased. The fact that queer fashion shows are intentionally now taking place during “official” fashion weeks (rather than stand-alone events, which are also powerful) helps to credit originators of queer style, and to present queer fashion through a lens of diverse LGBTQIA+ communities, rather than for our stories and designs to be appropriated and pinkwashed for the purposes of generating “salacious” fashion week press that mainstream designers often get when they “borrow” from another culture to “push boundaries”… for one show.

As writer, producer, and author Jacob Tobia so eloquently reminds us, “Gender nonconforming, trans, and queer people have always been at the forefront of fashion because we understand, on a gut level, that gender is play. That’s something that many mainstream designers miss: they take gender so seriously, as if the identities of ‘man’ and ‘woman’ are somehow fixed positions, as if they must compete to define the ideal ‘woman’ or ‘man.’ That’s what I love about queer and trans leaders in the fashion world; we bring a much needed sense of levity and experimentation, while simultaneously deepening the political meaning of fashion. It’s time that cishetero designers end their stranglehold on mainstream fashion houses and open up to other visionary voices, and no, just having gay men isn’t enough. I deeply admire the work of designers like Rio Uribe of Gypsy Sport, Audio Helkuik, Nik Kacy, Alok Vaid-Menon, and Olivier Rousteing of Balmain — trailblazers who are celebrating the brilliance of queer, nonbinary, and trans creation at every level. But I long for a fashion culture that is able to celebrate queer and trans ingenuity on queer and trans bodies. In this way, Equality Fashion Week was a much needed, vital presence in this year’s Los Angeles Fashion Week slate.” 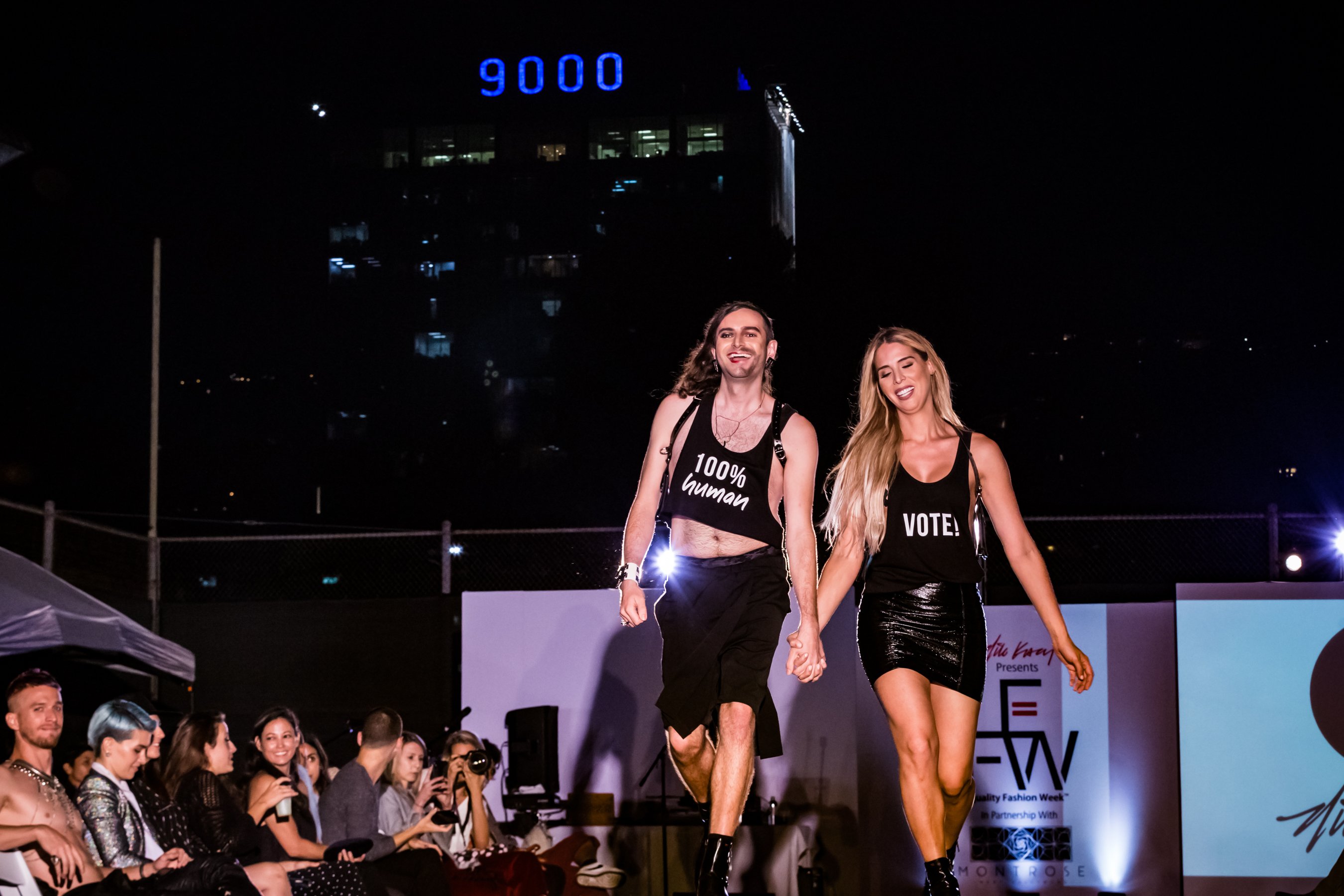