I grew up in a sports household, so I absolutely love the objective talent and ability of athletes. Yes, sports industries are full of isms and phobias, but let’s not pretend the art worlds and awards ceremonies are not. What I get from watching sports is Black excellence at its best, without all of the subjective colonialist determinations of what makes for a good artist (photographer, actor, opera singer, etc.)

But, I’m not here to convince you to like sports. I am here to tell you that, if you love fashion, you would know that some of the most interesting fashion rooted in political resistance isn’t showcased on the red carpet at the Oscars. Some peak fashion-forward style occurs when professional athletes make their arena entrances wearing fire ensembles that one-up each other before the games even start, ensembles that have mainstream reporters shook at how far athletes have strayed away from the typical boxy business suit of the 90s.

The biggest known fashion wars are in the NBA. (The fashion would does call this the “NBA Fashion Wars,” hence my reference to it).  Steve Marsh of GQ writes, “the rivalry among the NBA’s elite has spilled off the court and into an arena where athletes have historically feared to tread: high fashion. Players show up for games wearing leather pants, lensless glasses, and printed silk shirts—and that’s just Russell Westbrook.” The NFL and other sports leagues have also jumped into the fashion rivalry. However, there is a racist history behind the NBA fashion wars that should be acknowledged.

In 2004, a serious brawl broke out at a NBA Pacers–Pistons game. The reasons behind the physical altercation between players and fans were complex and some of it is covered in a Netflix documentary “Untold: Malice at the Palace.” However, American society was in the midst of its usual culture wars, and Black culture – our families, our clothing, our music – were at the center of this conversation on conservative media outlets. Conservative pundits used the brawl to bolster their argument that baggy clothing and hip-hop culture were the cause of all of society’s ills.  And, in lock-step, mainstream media saw this sensational story as red meat to get on the anti-Black train.  Jack Moore at UPROXX captured the sentiment of the time, and what ensured, perfectly:

“…Corporate sponsors were threatening to leave the league in droves. In order to bridge the growing gap between the league and its financial base, David Stern and the NBA’s white leadership commenced an all-out assault on the symbols of blackness sported by the hip-hop generation, with a dress code as its chief weapon.

And as such, 12 years ago in October, Stern and the NBA implemented a dress code, one that remains in effect to this day.

The new rules did not simply call for players to dress in ‘business casual.’ The rules specifically outlawed certain clothing items strongly identified with hip-hop: sleeveless shirts, shorts, jerseys, T-shirts, sports apparel, chains, pendants, medallions, sunglasses and headphones were included among the banned items. ‘Headgear of any kind’ was targeted in particular, unless said headgear was pre-approved by the team and included some sort of team identifier.

NBA executives tried to pass it off as not a racist measure but one to foster professionalism. David Stern said, ‘The notion is that if you’re a professional, with it are certain protocols. One of them is the way you dress when you’re on business.’

But, Black players were not simply just going to give up style that affirmed their identities and showcased their historical love for trailblazing style. Black folx have a long legacy of being fashion pioneers, of setting what is cool for the culture, and NBA players deciding to dress in bold colors and patterns beyond the typical “business casual,” while still following the “rules,” was to act from a place of agency, to contradict, to rebel.

Since the post-Malice at the Palace dress code was set specifically for the NBA, it has take some time for other athletes to get into this “high-fashion as rebellion” game. Recently, the WNBA has been upping their fits in the “arena tunnel entrance as red carpet” rivalry.

The WNBA style is also breaking binaries. According to Sports Illustrated, “Whereas once, not that long ago, WNBA players were asked to sit through hair and makeup classes at rookie orientation, now they are free to express their style as they want. They can, as a New York Times op-ed put it, ‘celebrat[e] and showcas[e] androgynous swag.'”

Prior to this shift, the WNBA was attempting to keep players from looking too “mannish” in order to play up heteronormative sex appeal for marketing purposes. Today, WNBA teams like the Seattle Storm have partnered with TomboyX, a queer-owned, female-founded gender neutral line of undergarments.

WNBA player Courtney Williams, who calls herself  “one of the flyest” dressers in the WNBA stated, “It’s dope that we’re actually getting this recognition for how we dress, and not being put into a box where women have to dress a certain type of way. Swag is swag. Drip is drip.” 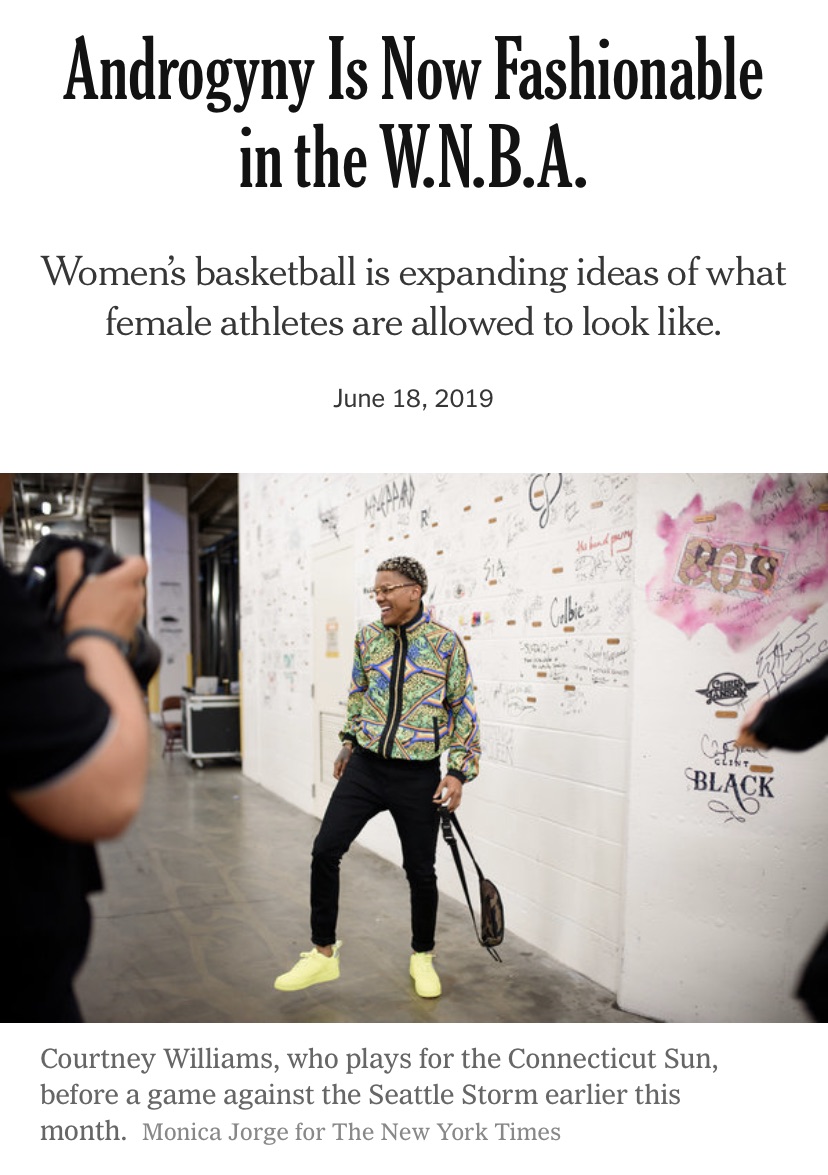