Here’s the first in a series of e-mails started last month:

I have a 15 year old daughter, who is clearly stating that she is most comfortable in men’s styles. She has not worn a dress or skirt, etc., in years, but that seems common where we live in CA. She has not stated that she is lesbian, and when I asked if she thought that were the case, she indicated maybe. In my opinion her sexual orientation is beside the point, though we (her father and I) are with her 100% no matter what her orientation is or turns out to be. Long way to get to my question. We have a FORMAL family wedding we will be attending in South Carolina in June. In my opinion, that day is about the couple getting married and is not the time or place to draw attention to oneself, which dressing in male clothing would certainly do. I feel like a hypocrite, though, as I want her to be who she is, just to not choose this particular occasion to make this statement, as it would certainly no go over too well with the “crowd”. But, now to the point, we are having a difficult time finding anything “formal” for a young woman, that is neither a dress nor a tux. Any ideas?

As you can imagine, I was thrilled to receive this query because 15-year olds like this are the reason I launched dapperQ.  Every time I solicited advice in person, I got to see folks tear up.  Whether you are dapperQ or not, this type of empathy from your mom is often only the stuff of dreams.

@butchlma Slacks, dress shirt, and vest (no tie). I find that it is generally the tie that freaks people out. Vest makes the outfit dressier. 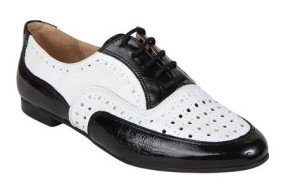 In a phone call with Mom, I suggested that she consider a monochromatic look (all black or all white) that would be formal, classy and play down lines. I agreed with @butchlma about the vest as a go-to and suggested that a woman’s tux shirt with (maybe )some frill on the sleeves could be nice.  I also suggested it might be a time to buy something she would really cherish, like some spectator shoes from Steve Madden (pictured right) or a pair of gorgeous cufflinks.

We also talked about intentionality – the idea that folks might not like what she is wearing but, at the very least, they will have to admit she’s put together.  We talked about the importance of being her daughter’s ally. And that she shouldn’t worry if her daughter has “fun” at the wedding.   Formal affairs are torture for most kids.   Let’s shoot for not being traumatized.

Since then, Mom wrote to tell me they had found “a great long formal-looking vest from, believe it or not, JC Penney. And it was on sale!” Turns out her daughter and I are the same size so I will be sending the Ellen Tracy tux shirt in which I wed as well as some gorgeous red stone and gold tux cuff links.

It was this nugget from Mom’s most recent e-mail that inspired me most:

I have learned a lot since I first wrote to you a month or so ago…I learned from a trusted friend, that I am in a position to influence how my daughter’s attire is perceived, by what I wear. If I shift more in the direction of her attire, she stands out less.

I must admit that I have not decided exactly what to do about that, but it has helped me in my thinking, because rather than thinking so much about focusing on her look, I am now thinking more about mine as well. If we each wear what we are most comfortable with that is one way to go. But if I shift in her direction, while still in my comfort range (which is pretty darn wide) she stands out less and that may be helpful to her. Just wanted to share my thoughts as they have developed. I’m still working on this and so appreciate your support!

If you had stuck me in a room with no food, I wouldn’t have come up with this advice in a million years! I’ve always been the one that does the compromising. It’s ancient thinking – my on-going belief that I am wrong and the world is right.  But this mom is making the world safer for her dapperQ and, I’ve not doubt that her actions are rippling more broadly.

Happy Mother’s Day to all of us, whether we’ve got children, or are simply birthing ourselves…