L.A, I’ve been told, is the land of the big femme/little femme couple. The masculine of center would be hard to find. I was told I would find few “queers” here and in fact that using the word queer wasn’t as common in L.A as it is in my home town, NYC. You can imagine my delight, then, when my roommate told me about the Queerture Fashion Show at UCLA, curated by Tania Hammidi. When I arrived I knew I was in the right place when I saw a tweed jacket and a three piece suit.

Tania and I were able to chat about queer fashion on this side of the coast and why its important to represent in Gloss Angeles. 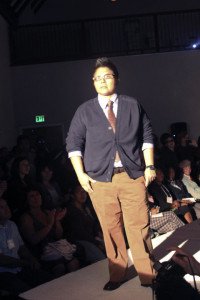 What inspired the fashion show and the talks surrounding it?

The UCLA “Queer Fashion” Conference organized by the LGBT Studies program is the first West Coast queer fashion conference to date – they had their ear to the ground! My fashion show, Queerture: Queer + Couture was inspired by the runway showcase I produced last year, INVINCIBLE: Back from the Ruins held at the Butch Voices L.A. conference. The beat on the streets today is designing and showcasing tailored clothing for our LGBTQ people and communities. While this has been going on since the dawn of time, we have more of a platform, shared talent, and resources now to spread the message far.

If you were speaking to someone who wasn’t from here how would you describe the queer/queer fashion scene in L.A? How do you think L.A culture influences queer fashion here or other cities?

I’m not from L.A., I split my time between the Mohave Desert/Joshua Tree and the San Francisco Bay Area. My fashion curatorial work happens in whichever city someone invites me to put on a show …

Certainly in Los Angeles the movie industry has a big influence on how people dress in public. It’s an expensive city with high stakes. Then there are subcultures: the punk music industry’s legacy on queer street culture, a vocal Chicano/a community, indie film pioneers who live in and travel through the city, all the queer/LGBT artists in industry, and all the university popoulations. So, the scene is not all “L-Word” lesbians – that’s just what gets on television or mainstream film. …. it’s really not my city but these are some ideas.

In general, LGBTQIA etc. style/fashion in every geography is a combination of factors. Some include: LGBTQ subcultural values about history, politics and community! Does a town care about politics of visibility, is there snobbery about the freaks, the flamboyant dressers, the gender-benders, or acceptance, etc.?! Then economic conditions and how rigid/binary gender is communicated and/or enforced. Are people getting beat up or not getting jobs based on their appearance? It happens all the time … And then the practical stuff: weather, transportation habits (ca, walking, bike, bus, metro, or horse), property values, retail stores, and how often one consumes versus borrows, hand-me-downs, or makes oneself. In big cities, there’s a definite and clear split between what’s considered urban and hip versus “the rural” or “suburban” look. It’s how people organize themselves as populations get big.

As the beginning of any decade, it’s hard to say what will happen in the 2010’s but you can be sure, fashion/clothing-wise, 2020 will look a lot different. The Occupy Wall Street movement is already a testimony to that.

How would you describe your personal style? When would you say your style evolved to what it is now?

I’m a casual, snappy dresser who likes the sea, fire, mountains and art galleries – so I dress for that at all times! I am also political, masculine, and mixed-race, so I’ve never really found images of myself in magazines etc. Growing up, I’ve relied instead on comfort, colors and some flair. I’m not the butch who reads GQ or Vogue or even scans LGBTQ magazines for what’s hot or “successful,” fashion-wise. Instead, my inspirations come from the visual and performance art – queer and non-queer. I have also lived in Europe as a young person and am of Lebanese decent, so I’ve seen many handsome dapper male dressers in my life, influenced by the Middle East. I am not afraid to use ornamentation to express my masculinity, and I respect the hard work that goes into garment construction and design … 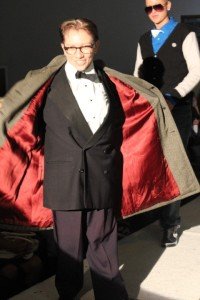 Is there a style or a particular influence that you see trending in fashion or wish were?

In LGBTQ communities I haven’t seen the trend of t-shirts and skinny jeans change too much recently, but a men’s suit buyer I know says the 80’s are coming back in, so get ready for polka dots!

Really what I see going on are designers and entrepeneurs doing one of a few things: some are focusing on masculinity – for trans guys and butches: which means bow ties, tailored suits or jackets, and trans-male boxers (so the goods don’t fall out). On the other hand, there remain those designers who incorporate pride sayings or messages into silkscreen t-shirts, bags, etc. but are doing so with more confidence or interests in creating business models that will bring an income. With Etsy, Twitter, Facebook, etc., so much more is possible. Finally, there are a number of uber-talented senior designers I know who slave for established mainstream brand name designers, because it’s still incredibly difficult to “make it” at all in fashion …

I feel like we’re almost there but it won’t come unless there is a serious restructuring of the Western economy and a move towards Green Fashion Production… But perhaps in the next 20-30 years we’re going to be buying affordable, HOT clothes that fit our multiply-sized, raced, and gendered bodies which emphasize our sexiness and creativity, made by our out, favorite designers. That’s quite exciting if you ask me! I am a big fan of senior femme diva designer Parisa Parnian, who is actually a menswear designer. 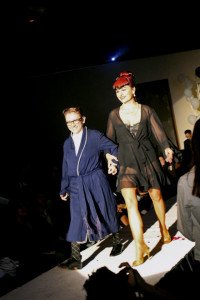 Are there classic looks that you feel everyone should have in their closet?

I can only answer for the fellas out there. A good pair of jeans, clean t-shirt and socks, boxers and brown or black shoes OR boots are the basics. For me, black on black on black is my second basic essential color scheme and “look” – these colors hide contours and dirt & work for every occasion. From there, dress your personality! Have some fun! One good suit jacket seems a must-have. Smelling sweet for your lady for gent is a big plus, some organic hair product, white tank tops. I tend to go for what I imagine what Antonio Gaudi would wear to work on an Autumn day in Barcelona … we must fantasize to dream up our greatest images of ourselves!

Name one thing that you’ve seen in queer fashion that you wish would just go away.

Ha ha. Well, Dapper Q, actually I wish The Fashion Police would go away. It’s one thing to have a style consultant (someone who loves clothes and knows about structure, color, and shape) in your life, but another thing to have someone judging you! We don’t need to replicate the snobbery of the mainstream world in our own communities. Instead, it would behoove us to share information, aesthetic ideals, and foster environments where LGBTQ’s might feel good about their bodies and looks, instead of ashamed bc they are not measuring up to what other’s think is cool, attractive, or fashion-conscious.

I suspect you might have wanted me to quip like my gay style super-hero Quentin Crisp so I quote him now: “Fashion is what you adopt when you don’t know who you are.” Style is where it’s at … style comes from inside us, it’s about positive relationships with our friends and communities. Style is something unique to each one of us, apart from the hierarchy of “fashion.” Style is how we rock it, and that we rock it.

All photos by Candice.