“Menswear” sometimes has the undeserved reputation of being “boring.” But, masculine attire doesn’t have to be mundane, especially if you know how to incorporate head-turning signature pieces. I’m always on the hunt for unique items that add wow-factor to outfits, such as Grit Gear wearable leather art. 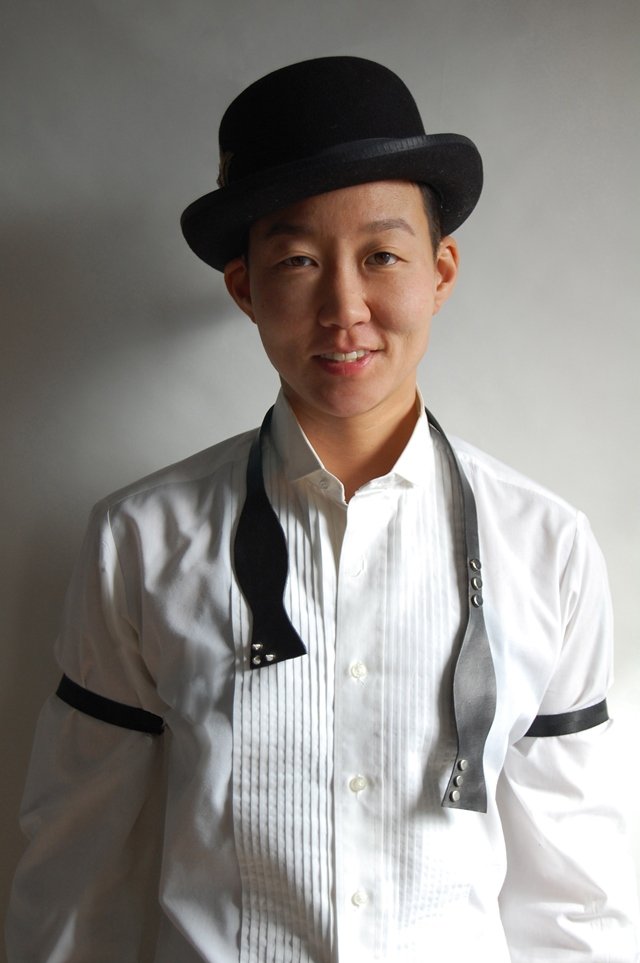 What makes Grit Gear even more special is that the founder, YK Hong, is a Freedom Trainer, visual artist, speaker, and writer in addition to being an incredible accessories designer. I corresponded with her to learn more about her personal style, what inspires her leatherwork, and what we can expect next from Grit Gear.

YK: I’m 37, grew up in a combination of Chicago and Seoul. I went to university in Durham, NC, then moved to California and now have been based out of Bed Stuy, Brooklyn for the past 10 years.

I am the founder and designer for Grit Gear. I’m also an anti-oppression trainer, traveling around the country giving workshops for organizations and communities around issues of combating and dismantling racism, heterosexism, classism, ableism, sexism and all oppression. In addition, I give talks on mindfulness, as with my TED Talk called “How Having Nothing is Having Everything.”

dapperQ: Can you tell us more about Grit Gear?

YK: Grit Gear is a line that came about because I was using leather in my artwork. In my art, I create pieces to elicit conversation and transformation. That philosophy carried over to Grit Gear. Grit Gear is a bespoke wearable leather art line that is attempting to break the boundaries and the gap between the runway and real life. I don’t come from a fashion background; I come from an artist background. And, my goal in both art, and now fashion, is to make the conversation more accessible to everyone, not just specific cross-sections.

Specifically, in terms of leather, I came of age in a community where “others” and “outsiders” were lumped together. So, for example, the S&M store was the only place to get rainbow stickers or sex toys. And those stores were always in the poorest sections of town, which were also areas where people of color congregated most. So, I was exposed to, and became a part of everything simultaneously and there was no judgment amongst us. Since I was already in the store getting lube, I thought, I may as well check out the floggers and harnesses. 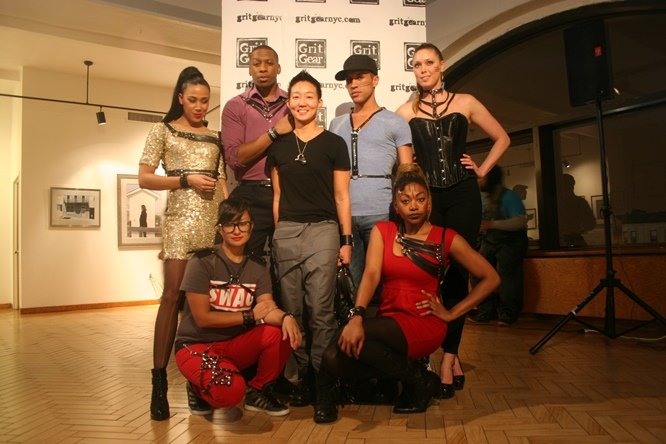 So Grit Gear, in part, was created to dispel the taboos around leather. Leather to me was as revolutionary as coming out in the South as a person of color. By creating pieces that are unusual, never-before-seen, people stop and re-adjust their notions of leather, how it can be design or a work of art in and of itself, and how it can be worn.

YK: The tagline of Grit Gear is, “Grit for the urban landscape and the endurance of the human spirit.” Those two factors heavily influence the designs. I am inspired by everyday objects and landscapes found in urban spaces. Often places and areas that are so common they become background scenery. Grit Gear is an attempt to find the uniqueness in accessible places, to show that art and creativity are everywhere. We walk on it, lean on it and navigate through inspiration all the time. It’s just a matter of being aware of everything around us.

dapperQ: You recently had a New York Fashion Week show. Can you tell us more about it?

YK: It was magical and accomplished the goals I set and way beyond. Everything came together seamlessly, the Team Grit models were absolutely spectacular, and the reception for the line was unparalleled. I wanted to have the event in Brooklyn, specifically in my neighborhood of Bed Stuy, to bring New York Fashion Week to the people who have supported me from the beginning: my community. Fashion week, and the art world in general, are often inaccessible and removed in the realms of class and race. I really want to eliminate that barrier and build the line from the people up.

dapperQ: What was the vision behind your Spring 2013 collection?

YK: The Spring collection is a major launch into exploring creative parts of the body to accessorize with Gear. Just as we have to be creative about how we find and dress ourselves in different bodies, so too, am I always looking for ways to think outside the typical ideas of what it means to wear anything.

dapperQ: How does your brand stand out from other leather apparel and accessory brands? 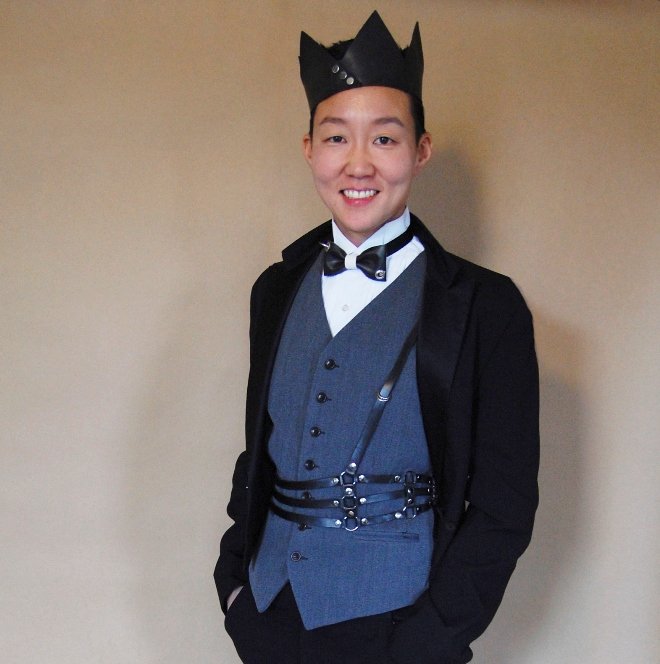 dapperQ: It’s readily apparent how Grit Gear can be styled for more rock n’ roll, punk, hip-hop, and hipster looks. But, how can Grit Gear be incorporated into dapper, dandy, and/or preppy aesthetics?

YK: That’s the thing about leather. Most people associate it with specific groups. As people who must always think creatively about how we navigate through the world, as people who do not fit into convention, it’s important for us to think of everything with an open mind. The more obvious choices are the leather bow-ties and suspenders. But, I extend that by showing a diversity of possibilities in the lookbooks. In a recent photoshoot, I wore one of the torso harnesses as part of a three-piece suit. It was like a fancy leather cummerbund. The beauty of being dapper is how you wear something, not what you wear. Grit Gear is not a fashion, it’s a style. The same exact pair of suspenders, for example, can be worn with a vest, over a cut-off muscle tee, on top of a tuxedo shirt, or hanging from your summer cutoff jeans. Grit Gear is trying to expand our playing field to express the extraordinary variation within our identities.

dapperQ: How do you define your own personal style?

YK: Simple, utilitarian with a touch of “out there.” Though my general clothing sense and fashion is classic, I always have an element of surprise in an accessory or a wayward color.

dapperQ: Has it been a journey defining your look? Tell me about it.

YK: We’re seeing more designers and fashions stepping up for the non-traditional body these days. The boom in queer-bodied fashion has exploded in the past few years alone. Also, the younger queer generation is getting creative and artsy with their styles, incorporating not just sexuality into their fashion, but culture, race, class, and nationality, which is a wonderful sign of changing identity politics.

As a genderqueer who has experimented with various and sundry styles and looks, every stage has been a journey. What I find, though, is that my look doesn’t ever go out of style. I tend to choose pieces and staples that have been consistently in fashion over the course of my life.

Grit Gear, and my artwork, is very me. Early on, I had to learn fearlessness, which is a big concept in my work. It’s simultaneously classic and outspoken. It is versatile and malleable. It always has a message and pushes the boundaries toward change. 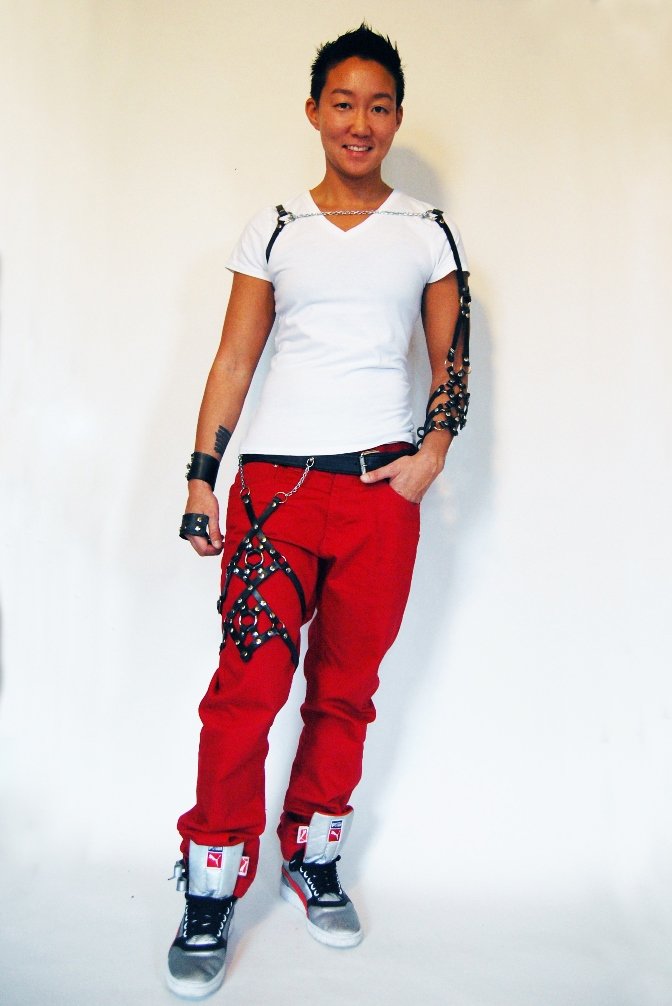 dapperQ: Have you experienced any challenges when it comes to dressing dapper queer?  What are they?

YK: As can be seen in the burgeoning lines of alternative gender lines there are always challenges for anyone who does not fit into a very specific size or shape. We are built differently, and the more we explore fashion, the more we find, there is no real average size or shape, but instead, the gamut is broad and extremely varied. As you can see, I’ve often created my own pieces when I haven’t been able to find exactly what I’ve been looking for.

Outside of the challenges of finding fitted clothing and accessories for the dapper queer, there is also the perennial issue of social navigation. Walking down the street as a dapper does not always prove amenable to everyone, clearly, due to heterosexism, sexism and a combination of other social oppressions. Being read as a woman wearing men’s clothing, a young man wearing stylish men’s clothes, or even as a gay man dressing effeminate, all experiences I’ve undergone, is not always safe in the physical sense. As we know, people often manifest their fear of the unknown through violence and harassment. I’ve had my share of defending myself in the streets, but also have the fortune of being resilient, lasting and having a background as an anti-oppression trainer has proved invaluable. I’ve de-escalated so many potentially violent conflicts simply by breaking things down and being fearless.

We are fearless warriors by walking through the world everyday as we do. We are also ambassadors of change, if we choose to approach the situation with that in mind.

Here’s an article I wrote called “Chinaman in Brooklyn” that touches on this:
http://www.ykhong.com/chinamanbook.pdf

dapperQ: What has most influenced your style?

YK: I’ve never been one to actively keep up with fashion trends, which I think, is one of the largest contributing factors to my own unique style. I remember being in my early 20s, creating styles that are just now becoming popular. It’s less of a who has influenced, and more of a how I have been influenced. As someone who has been outside of the traditional style conventions, I seek solutions in unexpected places. 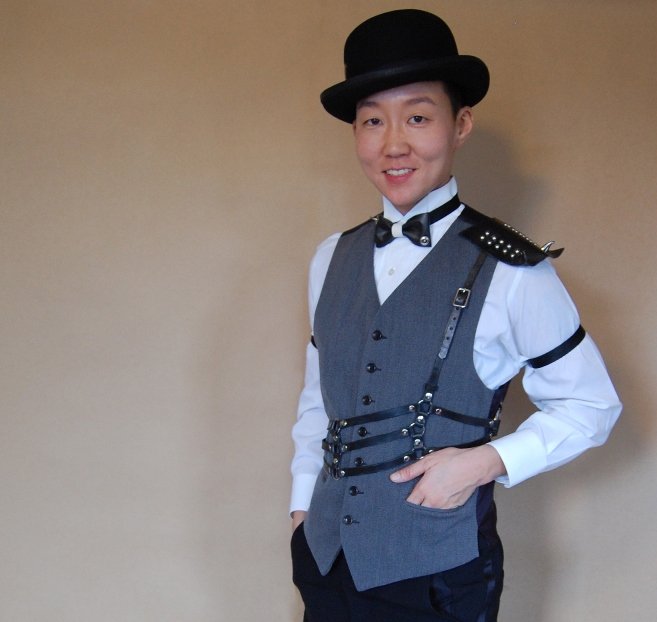 YK: As with all of my artwork, I tend not to isolate my favorites to any specific people or representations. There are so many designers and fashion-forward thinkers each with so much to offer in terms of inspiration and creativity.

dapperQ: Where do you shop for menswear?

Surprisingly, or perhaps unsurprisingly, I don’t really shop often. I have had pieces for years that stay in fashion forever.

dapperQ: What can we expect next from Grit Gear?

YK: More intricate pieces that create dialogue around our bodies as they are and how we want to represent them to the world. Grit Gear is not a subtle craft. It is fearless and bold, intended to express the human capacity to survive regardless of what society positions upon us. I’ll also be expanding the line to include synthetic versions of the pieces. Expect innovative designs that are so different, they will make you smile.