One aspect that thrills me most about being a queer writer and editor is coming across glorious queer wedding style on social media. My heart particularly melts when I see models and entertainers who have worked with dapperQ over the last decade show up in my feed sharing the most rocking wedding images where I can practically feel the joy of the occasion simply through the images alone. Such is the case when I scrolled through my Insta feed and saw the wedding images of Goldie Peacock, a drag performer who has also modeled for dapperQ in previous years. My heart burst when I saw how stunning they looked in their wedding suit and how beaming everyone appeared at the event. So, I caught up with them to catch a deeper glimpse into their special day. (All photos by beloved wedding photographer Erica Camille.) 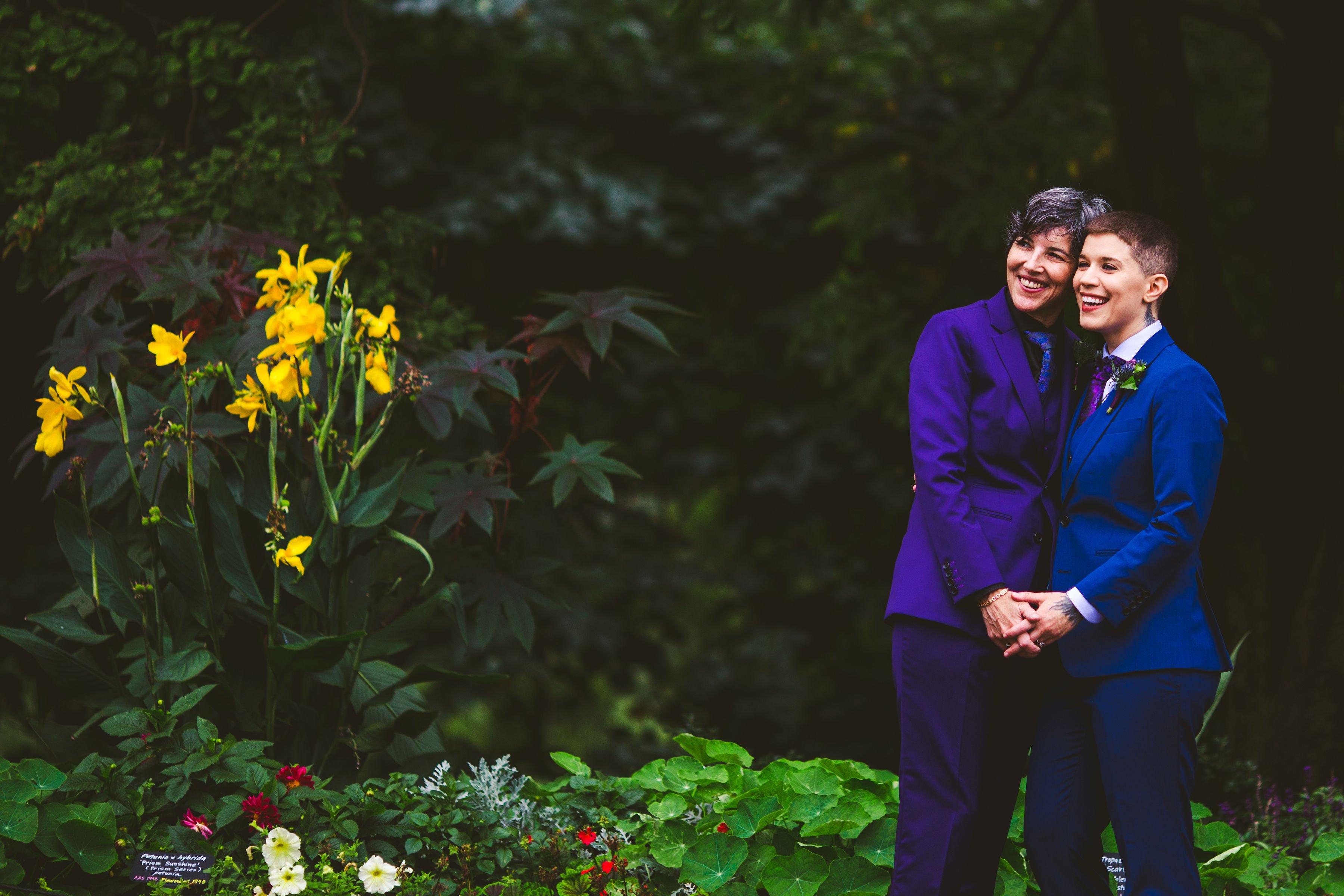 Love story:
Dalia Moss and Goldie Peacock met on October 24, 2015 (which also happened to be Goldie’s birthday) in the basement of Branded Saloon in Brooklyn, where Goldie was performing in a drag show that Dalia was attending. While dressed as a unicorn, Goldie felt compelled and emboldened to introduce themself to Dalia, and the rest is history. After all, who doesn’t love unicorns?

Engagement:
The two decided to make it official when, nearly two love-and-laughter-filled years later, at another Branded Saloon show (where Goldie was once again prancing around as a unicorn), Dalia dropped to one knee in the very spot where they’d met, ring in hand, and asked Goldie to marry her. Goldie gleefully accepted, then said “wait a minute” and ran to their bag to retrieve the ring they’d bought for Dalia which they’d secretly carried around until the time was right. After celebrating and mirthfully informing their nearest and dearest about the engagement, they began obsessively researching (a.k.a. Pinterest-ing) in order to plan an epic wedding. As the majority of the guests would be traveling in from out of town (Dalia’s family hails from London and around the world, while Goldie’s is mostly spread across the U.S.), they had to create a fabulous event that was worth the schlep.

The outfits:
Fairly early on in the planning process, they both decided that they wanted to wear custom 3-piece suits and shirts for their wedding, and chose to have them made by Bindle & Keep. Dalia ended up selecting a rich purple fabric for her suit, while Goldie chose a vibrant blue. They plucked their ties from Dalia’s substantial collection, and Goldie also elected to wear one of their favorite necklaces (for an extra glamdrogynous flare). As for footwear, Goldie wore blue velvet boots by Marc Fisher, and Dalia wore grey and black Oxford wingtip boots by Mezlan. To finish off the outfits, florist Miriam Bloom created boutonnieres that complemented her gorgeous floral arrangements for the evening. In lieu of getting ready separately, they chose to put on our attire together, and then do a first look for the parents. 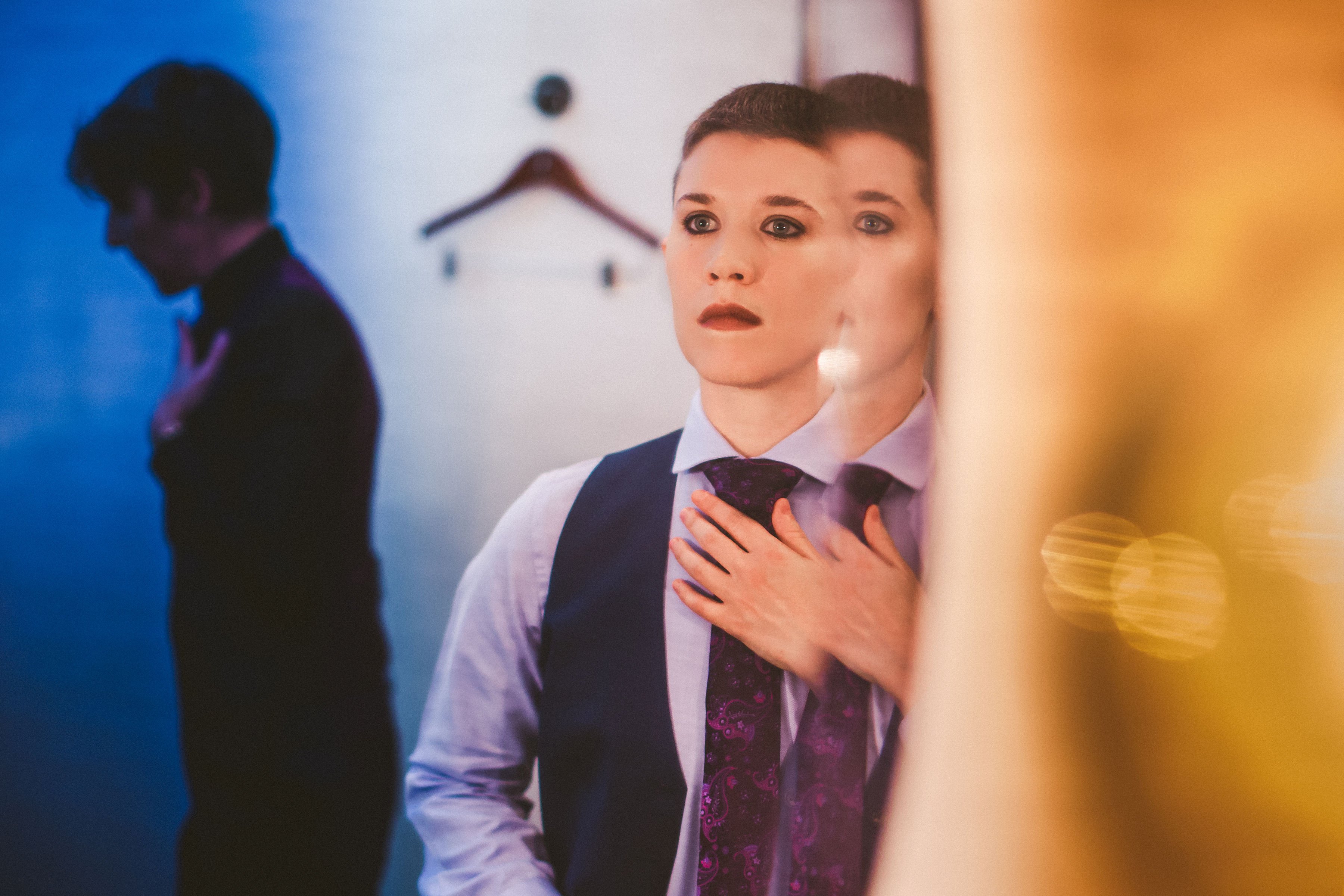 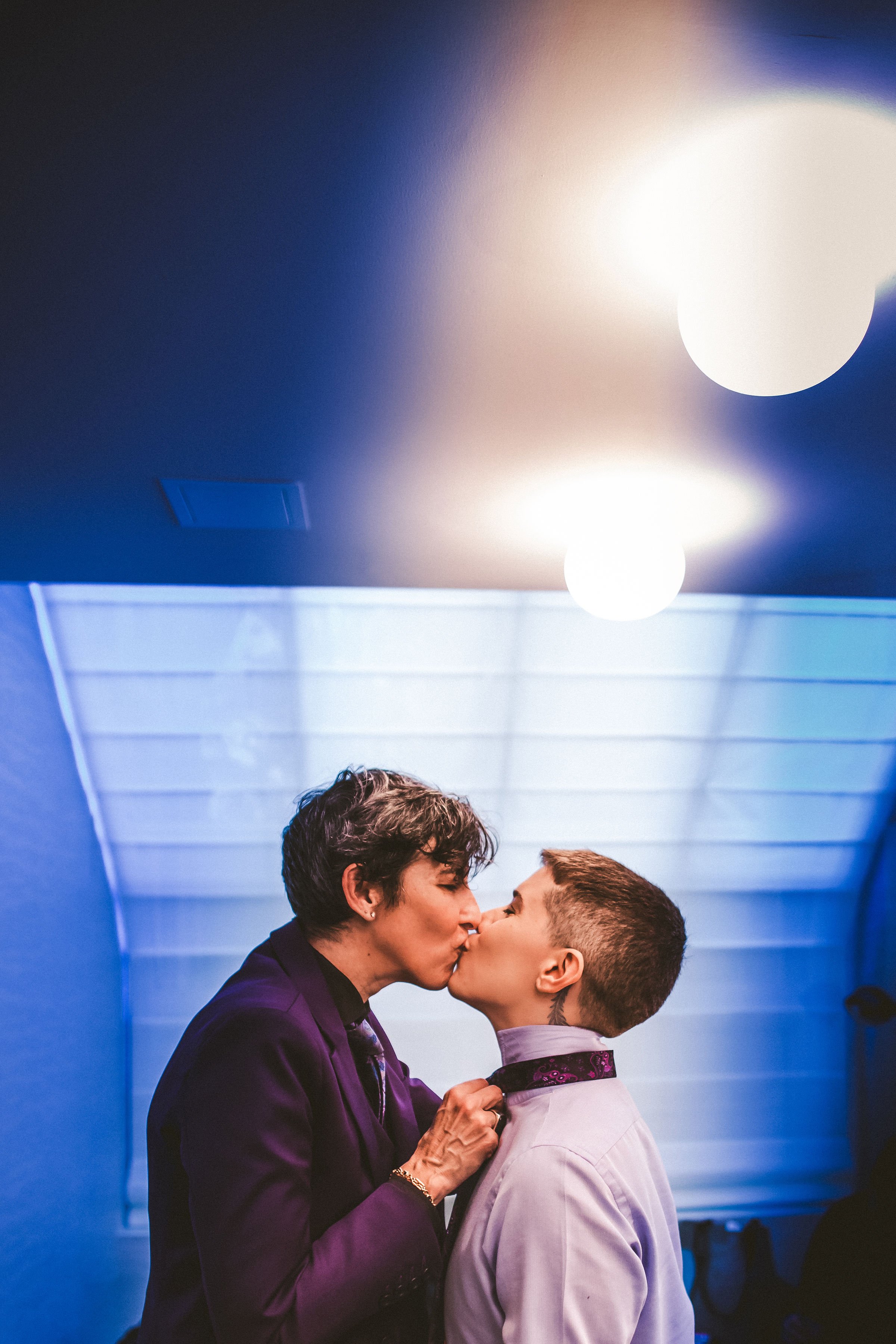 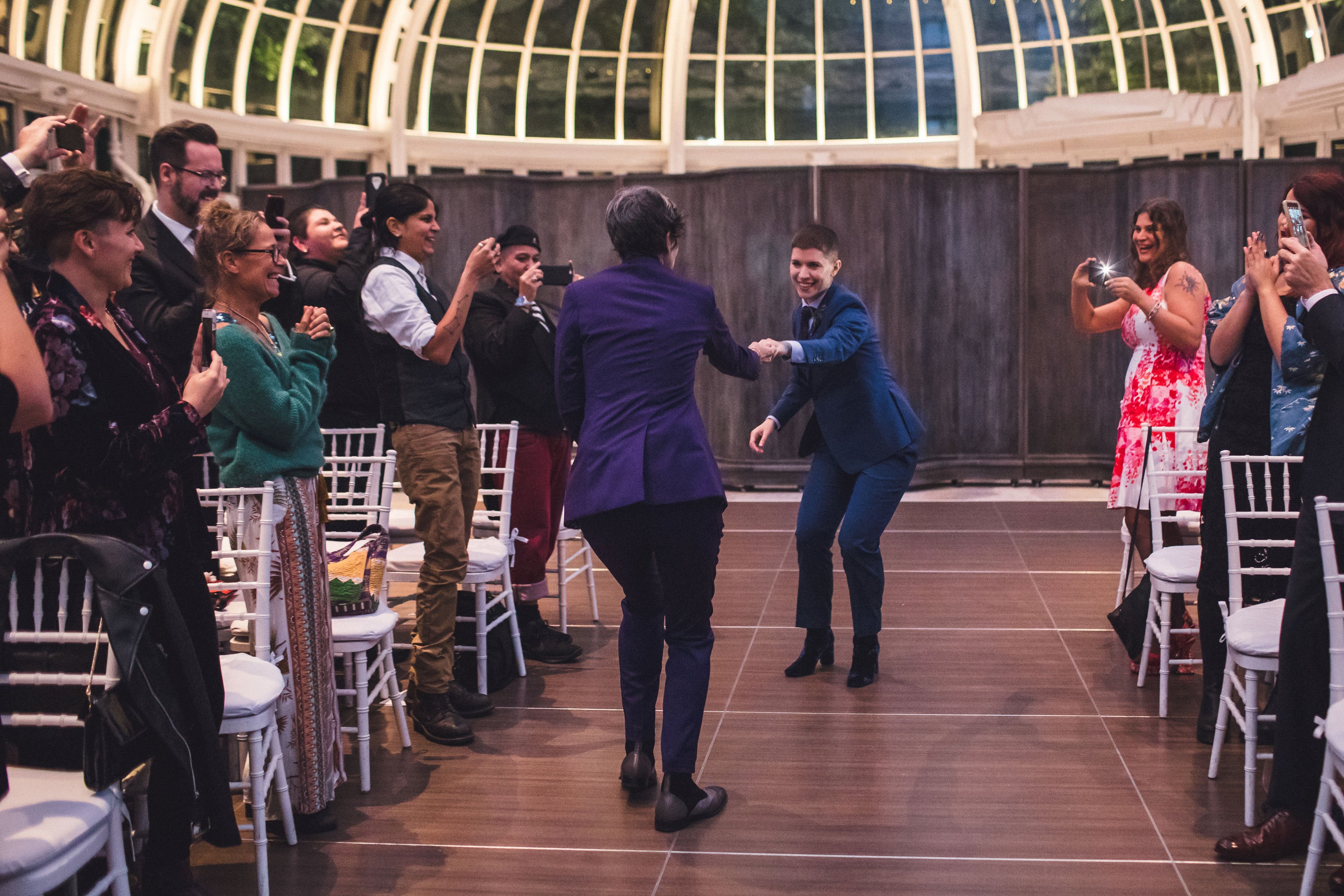 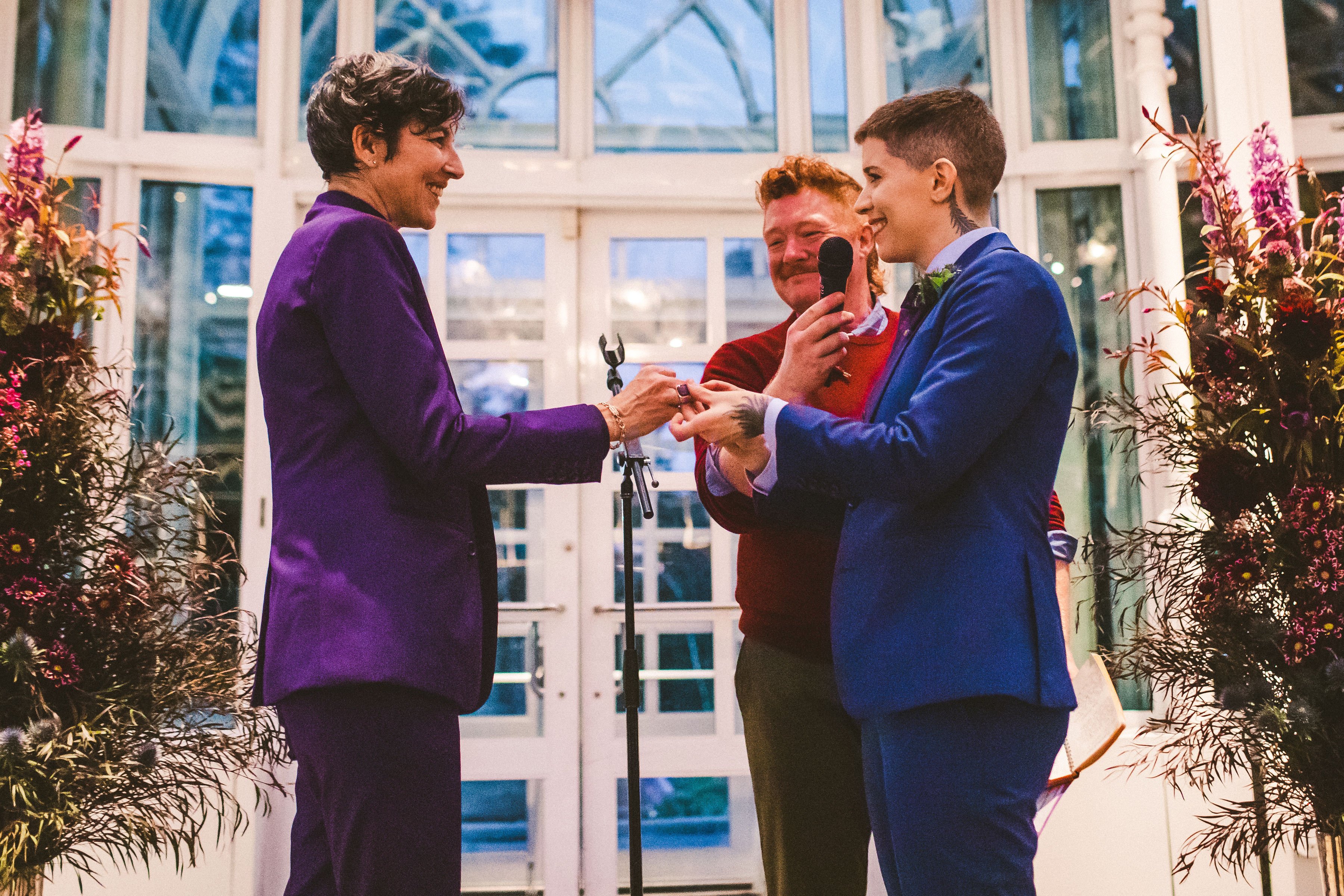 During their initial venue brainstorming process, the Brooklyn Botanic Garden stood out as a gorgeous and versatile location that was beloved by both of them and conveniently situated in close proximity to their Prospect Heights apartment. They loved that they could use indoor and outdoor space there for their event (plus have an easy contingency plan to take the entire evening indoors in the event of any wild weather), and that Patina Events provided on-site catering and service that got rave reviews. Being night owls, they chose to have the ceremony in the evening, at the beautiful Palm House. They entered by dancing down the aisle as our DJ, Rimarkable, played John Paul Young’s “Love is in the Air” and our 172 guests grooved and cheered. As the sun set, performance artist Becca Blackwell warmly welcomed guests and officiated their short and sweet ceremony, during which they exchanged vows such as “I promise you all that I have and all that I am. Good luck with that” and “I promise to keep up my daily meditation practice, for both of our sakes”. 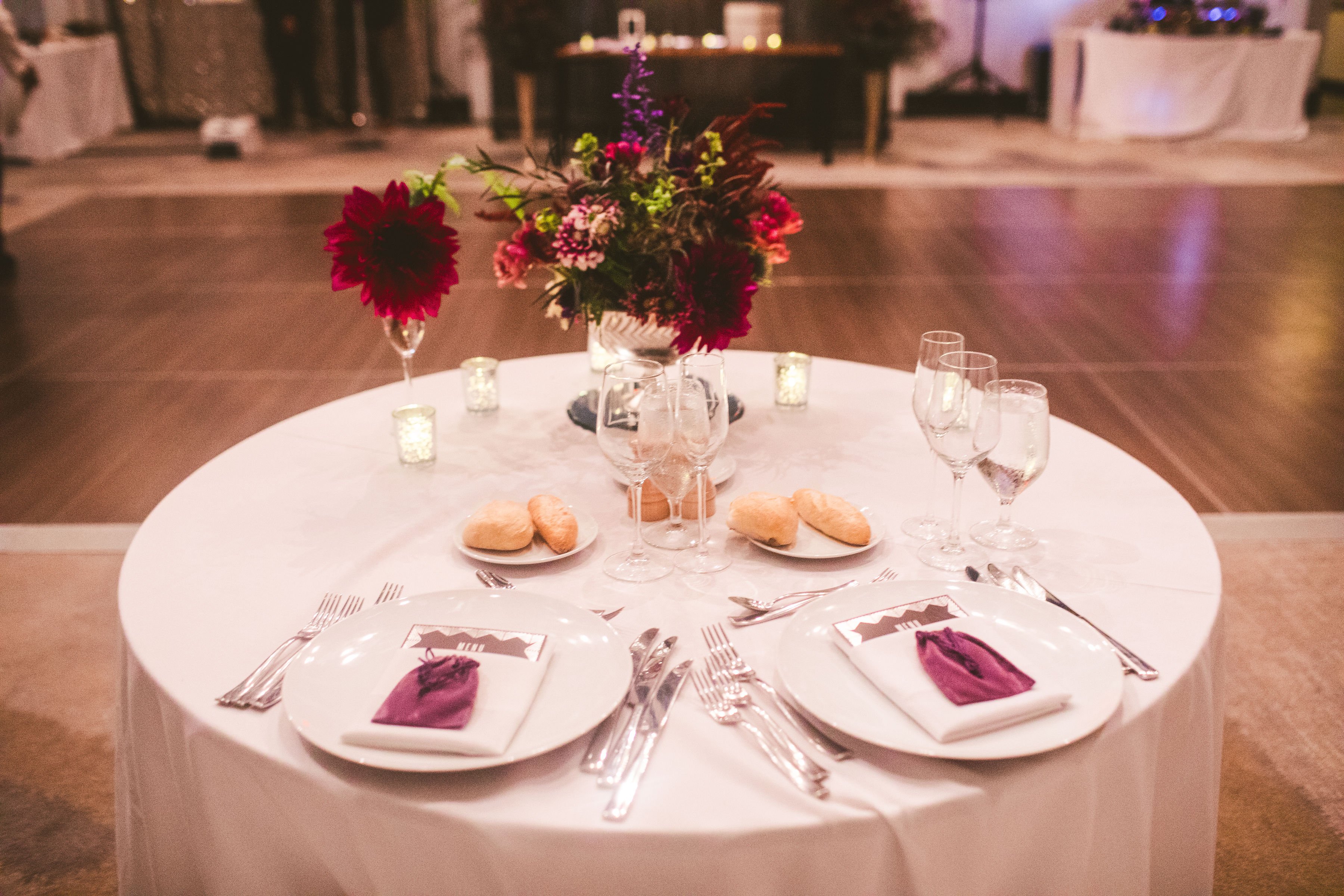 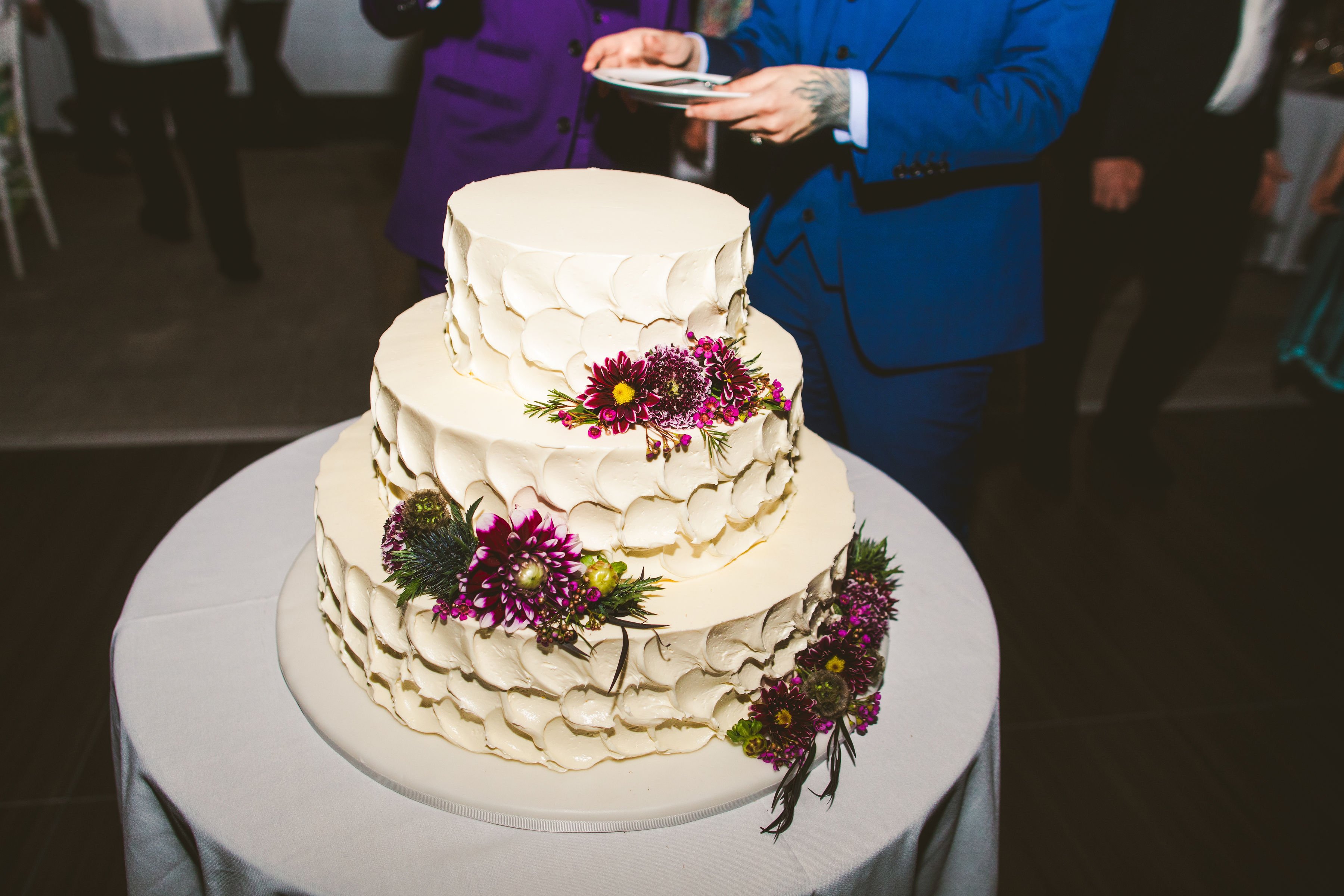 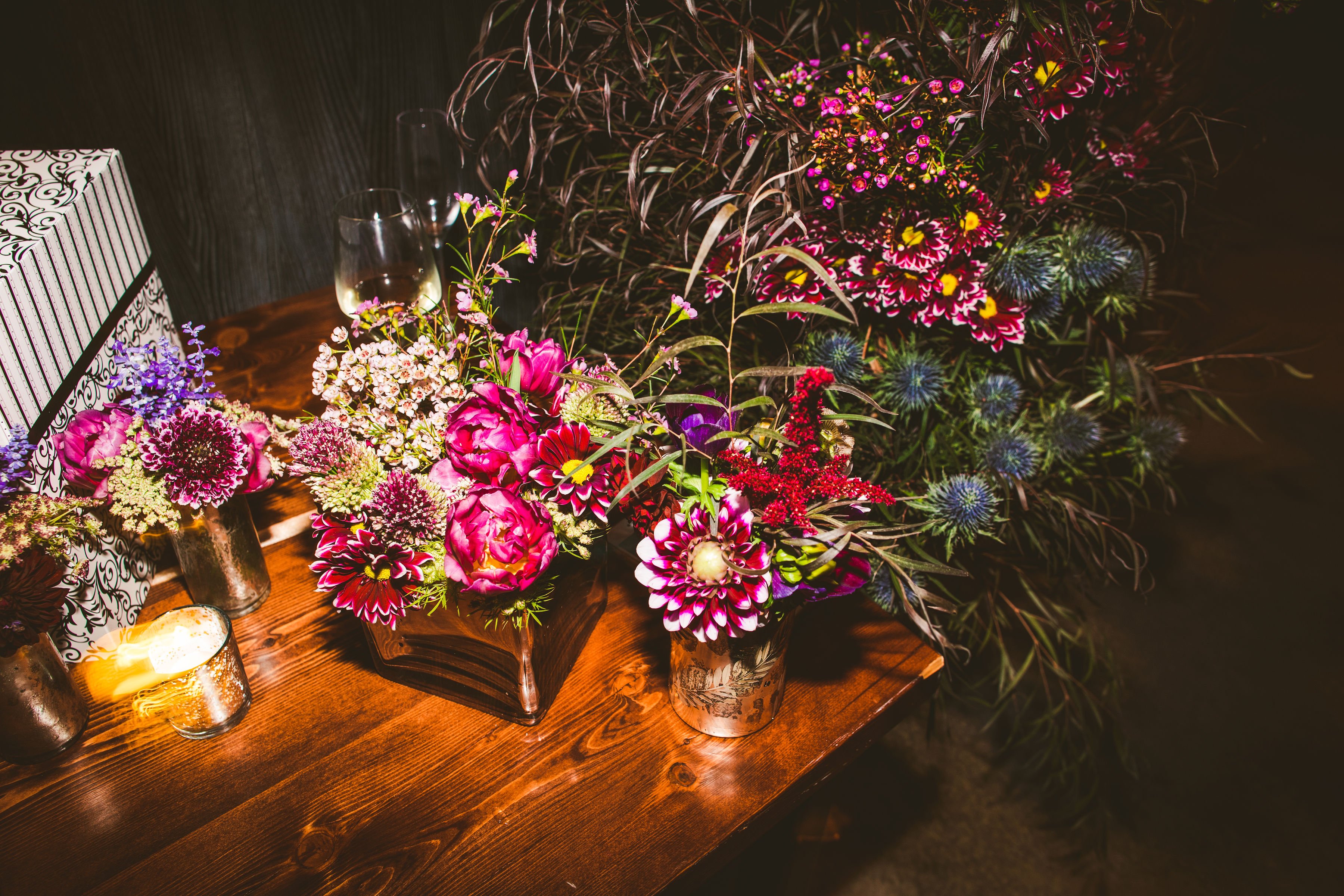 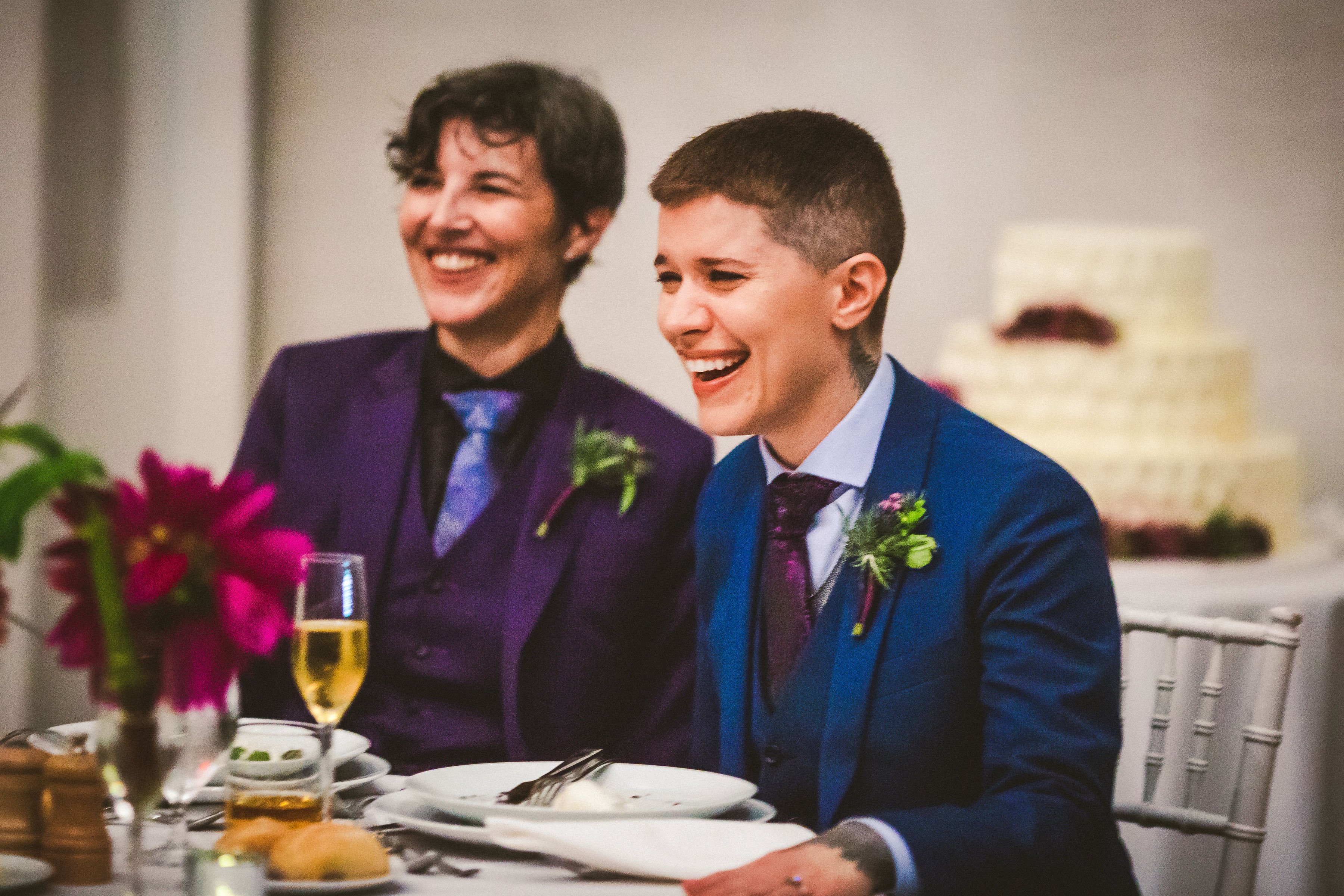 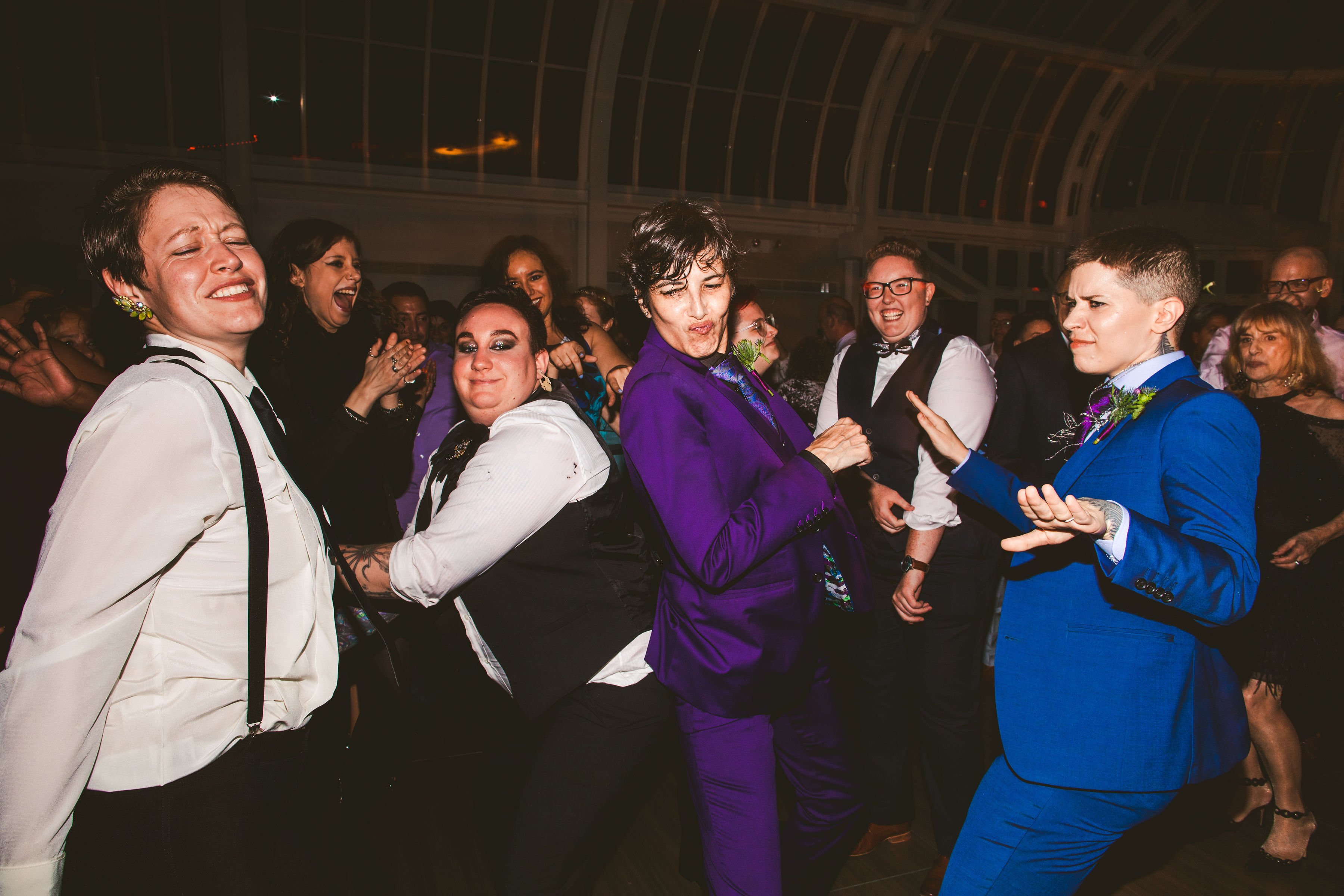 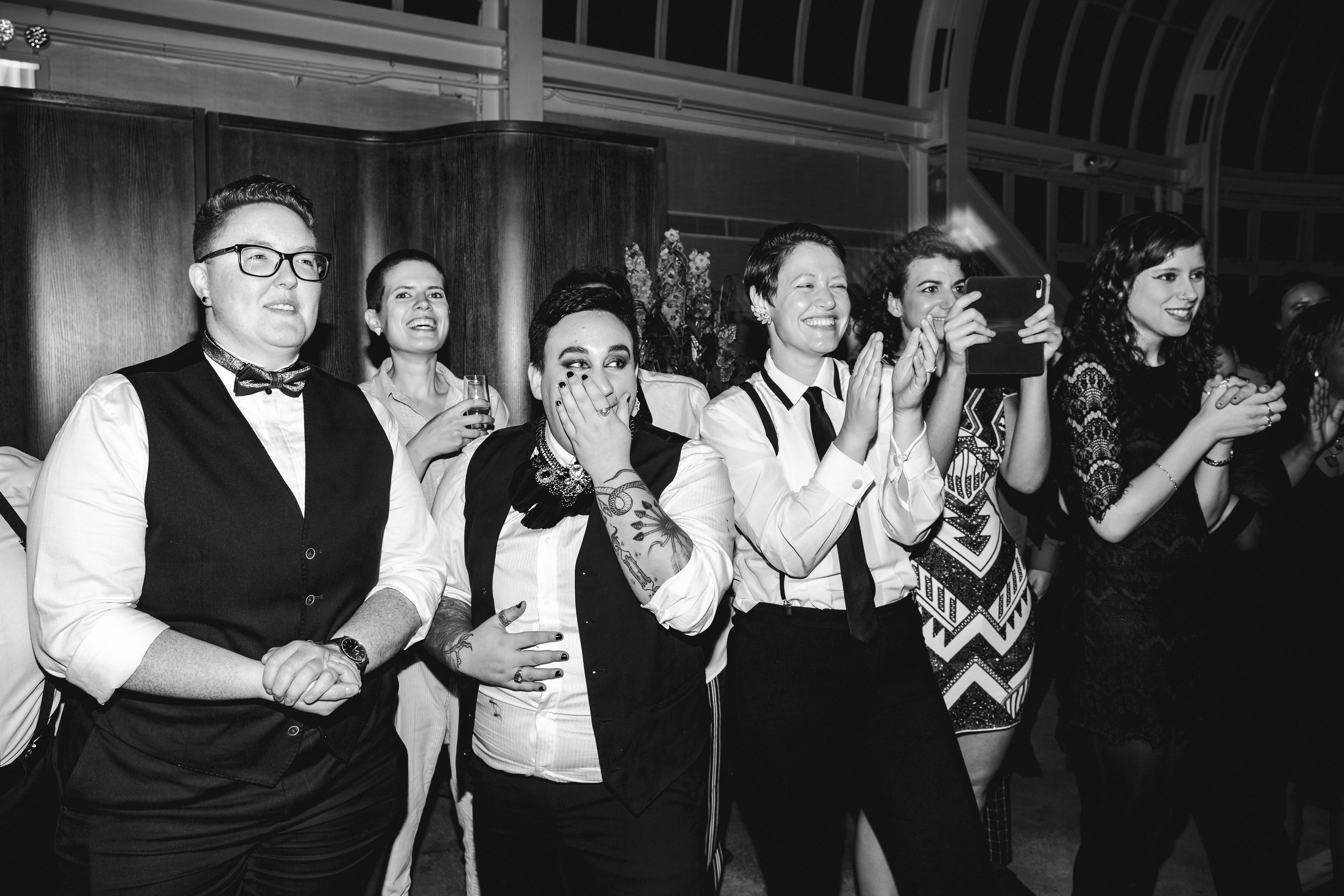 After they officially sealed the deal and exited to “Dance Me to the End of Love”, sung by Madeleine Peyroux, the guests filtered out to the Lily Pool Terrace for cocktails and hors d’oeuvres. When they reentered an hour later, the space had been transformed and they all sat down for speeches and a 4-course meal, but weren’t seated for too long because guests (some of the senior citizens, in particular) couldn’t stop themselves from dancing and singing along to Rimarkable’s soulful music. As the night glittered on, people from many corners of the globe and walks of life partied it up together on the dance floor in an exuberant celebration of love.

Loving this dapper wedding? For more photos, search/follow the hashtag #peacockmosslove on Instagram.