Last month, The New York Post published an article titled “Dressing like a lesbian’ is sexy, ‘powerful’ new trend, fashion expert says.” Immediately, my Twitter and Facebook notifications exploded alerting me that I was tagged in my friends’ and social followers’ hot takes on the piece. It has taken me a few weeks to process how I feel about the article, particularly since I wanted to honor the expert’s own real experience with erasure and their  personal journey to now feeling more visible.

Let’s start with the expert that the article cites, author Jill Gutowitz. Gutowitz originally shared her struggle with erasure and feeling unseen in a Harper’s Bazaar article in which she states:

“While I feel joyful that lesbian fashion is so beloved today, part of me also feels resentful. Androgynous looks that lesbians were once shamed for, that were once visual identifiers among our own community, are now Urban Outfitters staples. Why should Sarah be celebrated for dressing like Trinity, whereas simply declaring that I liked Dr. Martens in high school drew comments from peers like, “Okay, dike!”

Still, feeling not just accepted but celebrated on a massive scale feels validating and empowering. For me, wearing a formal suit for the first time felt like I was embracing my truest self, one I’ve always been so afraid to fully step into. Not to be so “Dakota Johnson wore a suede jacket and baggy jeans, so I wore a suede jacket and baggy jeans,” but, yeah, I identify with that simp from Mean Girls. Seeing lesbian fashion elevated has emboldened me—whether out of pure joy or pure spite—to become the most lesbian lesbian who has ever lesbianed.”

Mainstream shaming various marginalized communities for how we dress and style ourselves, only to call our culture cool and make money off it after oppressing us is something that I can deeply empathize with as a Black femme. This, here, is the harm of cultural appropriation. For example, Black folks can still be fired or denied employment for wearing traditionally Black hairstyles that society deems “unprofessional” or “unkempt,” while non-Black models on the covers of high fashion magazines and on high fashion runway shows can rock these hair styles and be praised and compensated for being “on trend.”

The larger conversation that the Post and Bizaar articles failed to address, in my opinion, is, “What exactly is queer style?” And, under the queer umbrella, is there such a thing as lesbian style?” Clearly, queer style exists. I mean, if it didn’t, how would dapperQ be celebrating it for over 10 years with our digital magazine, live fashion shows, panels, and forthcoming book? 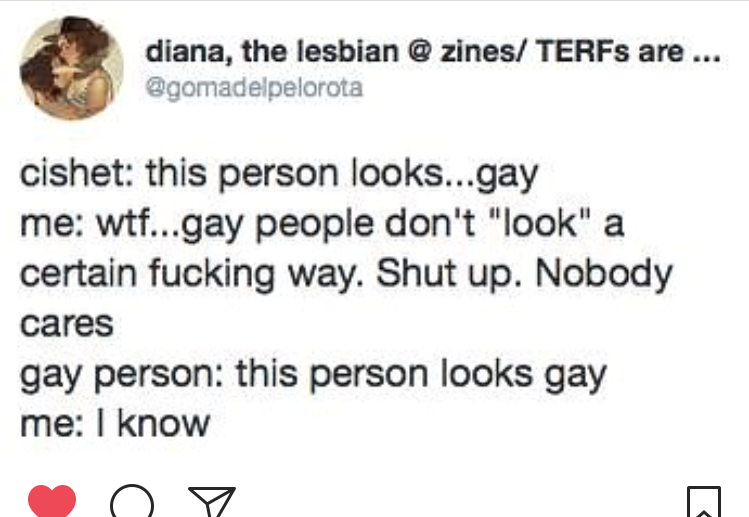 Queer style is personal, and to me, not about a particular item of clothing or items of clothing. Queer style, like all fashion, is political and politicized. But, what sets queer fashion aside from other aesthetics is that it is intentional in challenging harmful binaries and beauty standards, creating emancipatory potential for people of all genders and sexual orientations to dress in a manner that is the most self-affirming. Queer style is transgressive, transformative, radical. It is about reclaiming, whether that is manifest as queer femmes of all sizes dressing feminine not for the male gaze, but to have bodily autonomy, as well as agency in defining what is beautiful to us, not beautiful according to biased social standards. Or whether it is challenging the idea that there is only one way to dress non-binary. It is about fighting for dresses to be seen as powerful as suits, while also fighting for anyone who wants to wear either a suit or a dress – or both –  to do so. It is so expansive that I cannot put into words the immense diversity, multiplicity, and potential it holds. It is not simply skinny cis women, queer or not, wearing suits. The photos in both The New York Post and Harper’s Bazaar articles demonstrate a clear lack of understanding of queering style, as they just portray very hetero-normative, unattainable, colonialist definitions of beauty, a portrayal that is the exact antithesis of queer fashion.

And that’s what missed the mark for me. Within mainstream culture, cis het women wearing suits may be “in” or “out” this season. But, that is not an adequate or accurate portrayal of queer or lesbian fashion. Because queer style is not rooted in what patriarchal, hetero-normative, capitalist visions of style proclaims is “in” or “out.” Queer style is a movement that has come long before us with our elders paving the way, and will continue long after the “dressing like a lesbian’ is sexy, ‘powerful’ new trend” is over according to mainstream fashion outlets. Both articles also failed to address the privileges of not being a target of harassment, not being discriminated against, not being on the receiving side of endless bullying, not being a target of anti-LGBTQ+ violence, and not being the target of anti-LGBTQ legislation when one is cis het dressing in gender fluid fashion as a “trend” as opposed to the real threat LGBTQ+ communities face for simply existing in certain clothing.

Stay tuned for the release of dapperQ’s forthcoming book on queer style published by HarperCollins Designs.