Like dudes, butches have traditionally had a reputation for disregarding niceties valued by more feminine types.  When my butch buddies Nancy and Eliza went to New Hampshire years ago, for instance, Nancy bragged that they lived on “chips, salsa and pizza.”  Nancy and I were in New Hampshire last weekend with our mates, where I’m not allowed to do dishes because I don’t seem to be invested enough in the details of clean.  It’s a fun little narrative, the idea of a butch who could survive in the woods but couldn’t decorate her way out of an Ikea-swamped apartment.

For many years, it was certainly true for me. But those days are long gone.  Last Saturday night, I was in charge of dinner: a rye bread with carmelized onion I baked from a recipe in Artisan Bread in Five Minutes a Day, and a Grilled Eggplant with Salmoriglio dressing from  Easy Vegan.  (We were out of soy yogurt so I couldn’t make the Madeira-Roast Figs with Pine Nuts from the same book but I defy you to make a better dessert, vegan or no!) 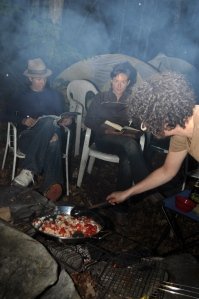 This last Fourth of July weekend a group of my friends — including Andrea who stood up for me at my wedding — took our traditional sojourn for camping in the Berkshires.  I was reminded yet again of what feels like the “new” butch when it was Andrea’s turn to cook.  From her blog, Culinary Curating:

At long last, my dream come true! Making paella over the open fire! A smokiness that cannot be purchased! A “one pot meal” but classy, and flavorful!  Or as my dad put it, “Davey Crockett meets Betty Crocker.”

It was mad delicious and, as you can see from her blog, one of many amazing culinary combos she has crafted over the past couple of years.

The mere existence of dapperQ is yet another manifestation of the new butch.  It’s not just that we enjoy sporting threads traditionally assigned to men, we enjoy transgressing how men wear them.  Viva bold color, mixing in women’s wear, reveling in the purple paisley and pink gingham!

That said, it is important for me to note that the new butch is not a rejection of the old.  I recently heard, for instance, that the word “dapper” was being adopted by some who want a word that doesn’t evoke traditional images associated with butches like flannel and mullets.  I was horrified to think that’s the reason anyone might have assumed I selected “dapperQ” as the title of this blog.  As my tagline says, I am a “self-identified butch” and proud of it.  While I may have spent years suffering not only with internalized homophobia, but more specifically internalized ‘butchphobia,” those days are over.  I’m so proud of those of us who are transgressing the definition of what it means to be female.

I’m also eager to constantly expand the boundaries of what is expected.  No one expects me to bring the loaf of fresh-baked bread to a party, nor Andrea to break out paella over the campfire.  Butch women have long been pioneers, expanding the boundaries of what was acceptable, or not giving a damn.  The “new” butch simply builds on that tradition.

Written By
Guest Authors
More from Guest Authors
As these dapQ Snaps attest to, last night Shannon and I gathered...
Read More